School tech programs work. Seattle should fight to get this one back 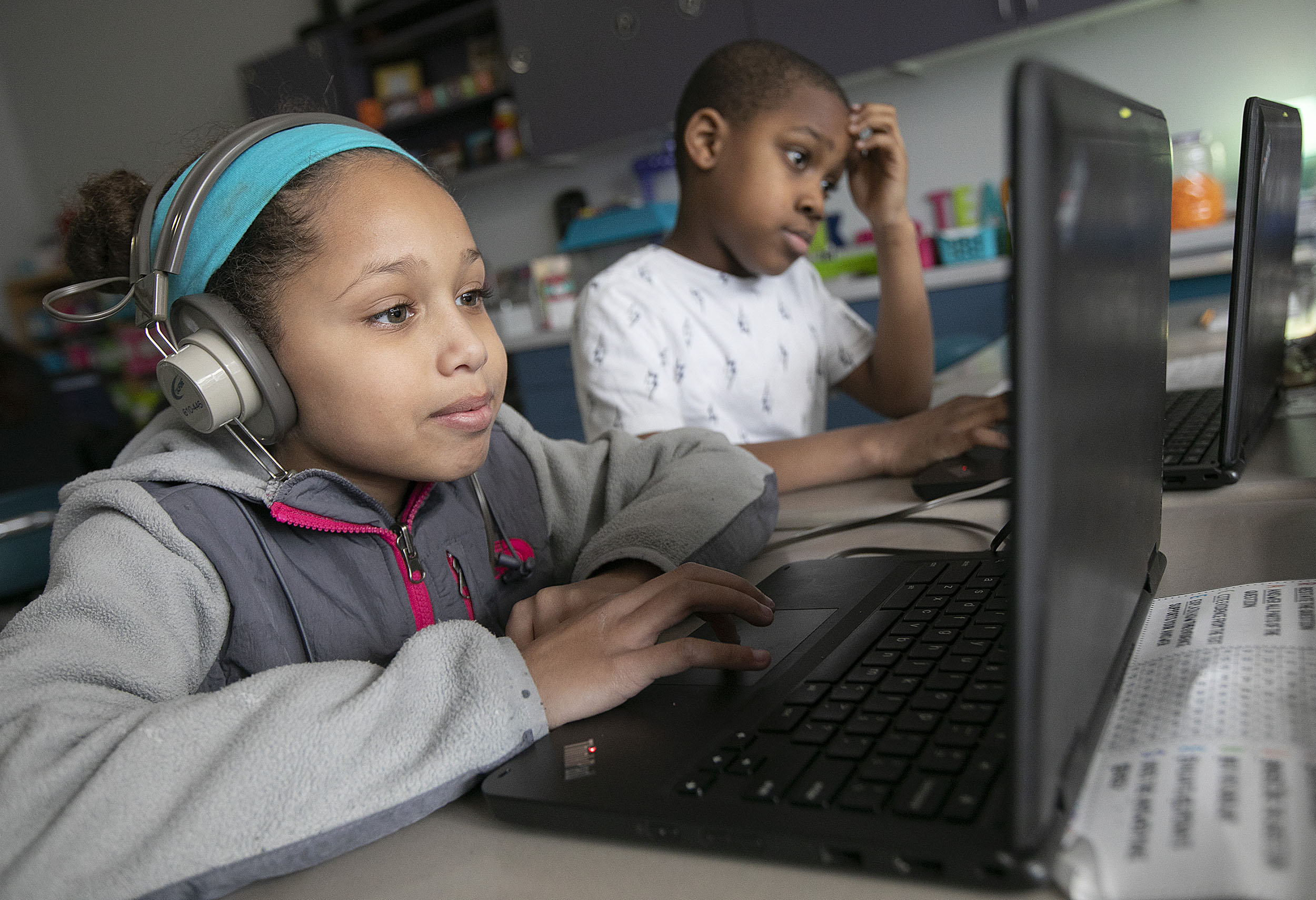 Two young students work on laptops in a third-grade class at an elementary school in Meriden, Connecticut. (Photo by Dave Zajac/Record-Journal via AP)

TAF is a Seattle born and bred nonprofit organization with a deep well of local support, as is made clear in their book, This is the Work: Insights for Social Innovation and STEM Education. Since its founding by Dziko in Seattle’s Columbia City neighborhood, hundreds of individuals have volunteered as teachers, coaches or board members for TAF. (Full disclosure: I proudly served between 2003 and 2009, as classroom volunteer, board member, eventually board president.)

Hundreds of young students from South Seattle families participated in TAF’s after-school programs: TechStart (grades K-8) and Technical Teens Internship Program (TTIP). Over 95 percent of the students who entered TAF’s programs finished them. Ninety-eight percent of the students who completed TTIP went to college and graduated. Dozens of companies, many of them in the tech sector, provided paid internships for TTIP students and followed with job offers after they graduated college.

It only makes sense that a program with so much success would now be deeply ingrained in the culture of Seattle schools, right?

Ah, but therein lies the rub … it isn’t. In fact, it doesn’t exist anywhere within Seattle schools. While charter schools like Green Dot, with a history of stumbles, expanded their projects into the Rainier Valley, TAF had to move its primary programs to Federal Way. There, its TAF Academy, a 6th through 12th grade public school partnership with the Federal Way School District, intentionally set in a low-income community consisting mostly of children of color, has graduated over 95 percent of its students and sent them to college. Unlike with Green Dot and its for-profit, shareholder-driven cousins, TAF's focus on student achievement has proven remarkably successful.

So why isn’t it in Seattle?

In 2005, Dziko, TAF’s co-founder and executive director, challenged her board. TechStart and TTIP students showed themselves capable of meeting challenges far more than their public schools were providing. These were ordinary students achieving extraordinary results. TAF had grown and applications exceeded capacity. Having proven that children of color had the capacity to succeed in science, technology, engineering and math only highlighted the problem: Current education was underserving the students’ capacity. Dziko believed it was time to find a way to provide these students with a full-time, supportive, education experience.

After months of research, assessment, debate and revision Dziko and Saleem, TAF’s director of learning, presented the board with a preliminary model based on TAF’s existing, student-centered, project-based learning model. TAF Academy (TAFA) would be neither a private school nor a charter. Rather, it would be a TAF/school district partnership, firmly a public school, with resources and training for teachers and staff provided by TAF. It would be a 6th through 12th grade school intentionally placed in a low-income neighborhood, enveloped in wraparound social and educational services for students and their families.

Dziko and Saleem met with key Seattle community stakeholders, politicians, school district staff and representatives, as well as teachers union leadership. Armed with their research and an already proven model for student success, they proposed a co-location at Rainier Beach High School (RBHS). Recently renovated, the high school built for 1,200 students actually held fewer than 450, so it had plenty of capacity. Every meeting went well. Everyone seemed to understand the need and the possibility. Everyone, including district administrators, elected officials and community leaders, voiced support for the plan.

Finally, Dziko met with the leadership team and teachers at RBHS and explained the concept, the research and the work that had gone into many prior years of developing TAF’s model. She described TAF’s student-centered, project-based, collaborative-teaching model, and its success for students. When all the information had been shared, teachers asked one question: Would TAF guarantee they could keep their jobs? Dziko answered honestly. They were welcome to apply for jobs at TAF Academy if they were interested, but would go through the same rigorous vetting as other candidates, with the same training afterward. Dziko reported this exchange at our board meeting with deep sadness, as a stark contrast to TAF’s core decision-making question, “What’s good for the kids.”

TAF was invited to present its proposal to a monthly gathering of African American community members. The Seattle School Board was considering TAF’s proposal and would vote on it the following day. Dziko, TAF Board President Harry Thomas, and I, as the next year's board president, attended on TAF’s behalf.

It was a stormy fall evening in the Rainier Valley. The room was filled with close to 75 people, mostly adults. Public officials, school board members and other dignitaries peppered the room. RBHS teachers sat in a back corner with several students seated in front of them. As soon as Dziko was introduced, the shouting began. A young woman stood and introduced herself as an RBHS student. She accused TAF of trying to take over RBHS and undermine it. She declared that TAF was a corporate-run organization of outsiders trying to disrupt her community. Dziko tried explaining that TAF was a nonprofit and had been running programs in the community, with community volunteers and participants, for a decade, that the program had received its first funding from the Magic Johnson Foundation. Had she had a moment, she might have mentioned her own background as a lone African American engineer at Microsoft, or how she and her partner, Jill Dziko, had funded the first few years of TAF out of their own pockets.

That opportunity never came. The student shouted her piece, and, in an obviously prearranged move, the president of the school PTA followed with a speech about how TAF would never receive their support. Students, teachers and parents stood and marched out of the meeting.

The next morning, Federal Way Superintendent of Schools Tom Murphy phoned Trish Millines Dziko. He had already heard about the prior evening’s events and offered to immediately begin implementation plans for TAF Academy in their district. Next the Seattle School Board, based on the events of the previous night, concluded the community didn’t want TAF Academy and turned down TAF’s proposal. Finally, Dziko got phone calls from the RBHS student and the PTA president. They had received a great deal of angry feedback from people within the community who heard about the meeting and were outraged at their actions. Each confessed they had based all of their comments about TAF on information from RBHS teachers and staff and now felt they had been misled.

Dziko accepted Tom Murphy’s offer. TAF Academy was established in 2008 as a partnership between the Federal Way School District and TAF. In the decade since, TAF Academy has graduated over 95 percent of its students and sent them to college, where they have flourished. TAF has been named a National School of Distinction six years running. Student success is extraordinary. Many return to TAF as supporters and volunteers after college graduation. This year, the program expanded and was rebranded as STEMbyTAF at Saghalie middle/high school. TAF’s programs have expanded to include teacher training and coaching at schools in the Highline and Tacoma school districts. They are among the top, nationally recognized programs in the country successfully serving communities of color.

RBHS still has fewer than 800 students, according to the district's school profile, although many more potential students live in the catchment area. A decade’s worth of opportunity and resources has been lost, a generation gone underserved. Predatory charter schools continue to circle. While we are voting on two Seattle Public School District-sponsored education levies on the Feb. 12 ballot, The Seattle City Council will soon be deciding whether the Families, Education, Early Education and Promise Levy, passed last fall, can be distributed to charter schools.