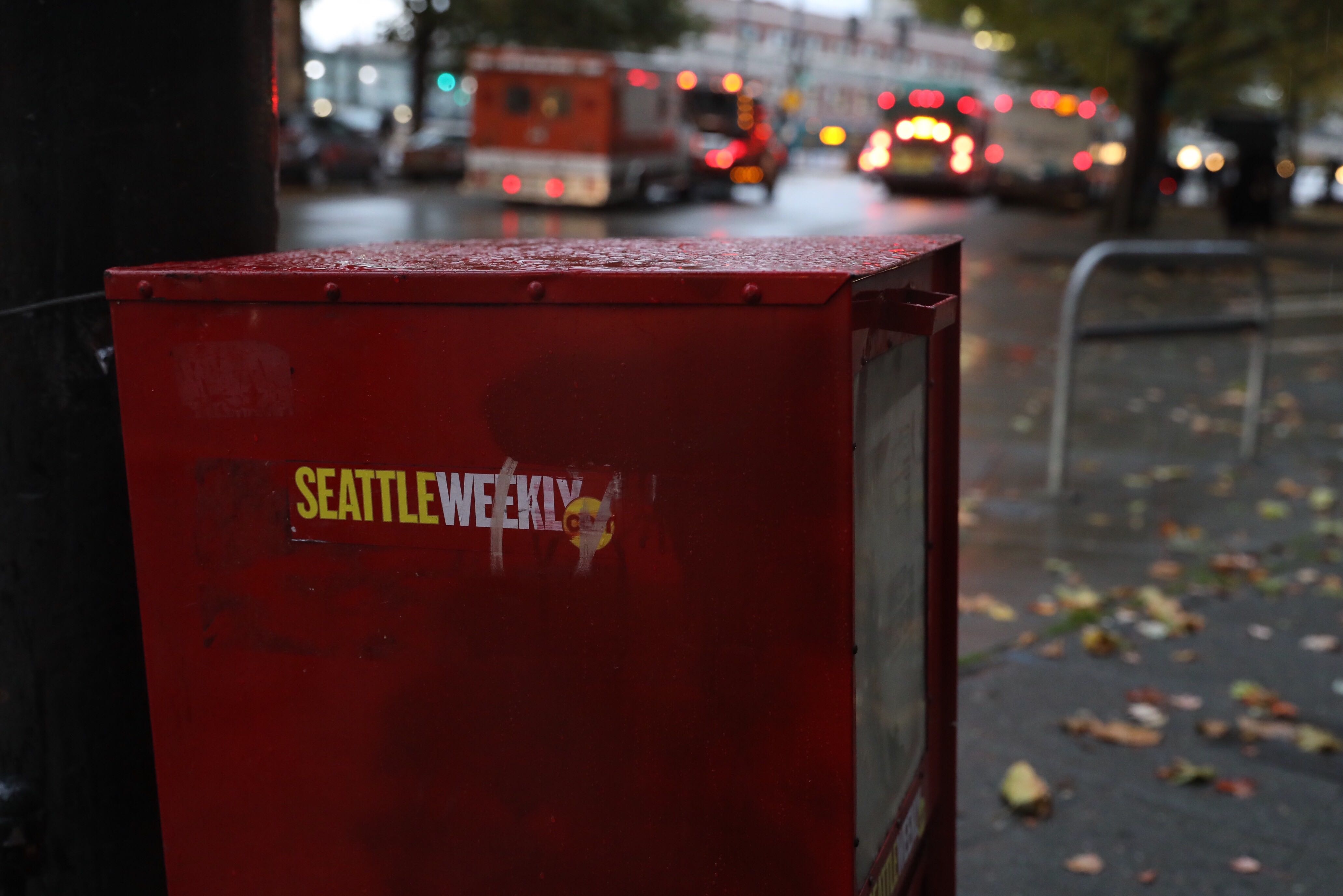 Sixteen months after the Seattle Weekly laid off most of its staff in a Hail Mary effort to remain viable, the paper will publish its final printed issue this week, according to multiple sources. The decision ends a more than 40-year run of city and regional coverage and leaves Seattle without a true alternative weekly.

The decision to close the paper comes at the end of the fiscal year for Sound Publishing, which publishes 49 papers around the region and 17 in King County, including the Weekly.

In a statement to Crosscut, President and Publisher of Sound Publishing Josh O'Connor said the Weekly will switch to "web only" format beginning March 1. The company will retain two employees to manage the website as well as a "multimedia sales consultant." The content will be all freelance work, plus crossposts from the company's other papers.

In a follow-up email, O'Connor said the company's other newspapers are "doing well" and there are "no other operational changes planned."

Since the moment in late 2017 when the Weekly was reduced to three staff members and folded more tightly into Sound Publishing’s network of community newspapers, the future of the free weekly has been in doubt.

Its shuttering comes at an existential time for local news coverage. Even as the New York Times boasts record readership and increased revenue, metropolitan dailies have fallen victim to aggressive consolidation by outside owners, many of whom strip the papers for parts in an effort to turn a lean profit. At the same time digital ad revenue has not kept up with lost subscribers.

According to one estimate, the United States has lost 1,800 newspapers since 2004. There are now 200 counties with no newspaper at all. Of those that remain, coverage is becoming less tethered to local communities — another study estimated just 43 percent of local news stories were original.

In Seattle, the journalism landscape is a fraction of what it used to be, with seattlepi.com laying off more staff last year in addition to the Weekly. City Arts, a monthly arts and culture magazine, shuttered for good after a fundraising drive came up short. The Seattle Times has been spared layoffs in recent years — even increasing the number of reporters working in its grant-funded “labs” — but the paper is significantly smaller than it was at its peak.

Just prior to the Weekly’s 2017 reorganization, the city's other alternative newsweekly, The Stranger, switched to a bimonthly publishing model. With the Weekly’s death, that means Seattle technically no longer has any true alternative-weekly newspapers, in the vein of the (now defunct) Village Voice.

The Weekly was founded in 1976 by David Brewster (who also founded Crosscut), a veteran of Seattle Magazine and KING-TV. It began as a paid paper, but switched to its free alt-weekly status in 1994.

The paper came into its own as Seattle emerged from the Boeing bust and was contemplating its future as a city. With its high-minded coverage of arts, food and news, the Weekly seemed to make a case that Seattle was, in fact, on its way to becoming a big city.

The paper was independently owned until 1997, when it was sold to Stern Publishing, owners of the Village Voice chain of alternative newsweeklies. In 2005, it changed hands again when Village Voice was bought out by the New Times chain of alt-weeklies. And in 2013, it was purchased by Sound Publishing.

The Weekly kept its alt-weekly aesthetic until October 2017, when Sound Publishing laid off staff and refashioned it more in the model of its other suburban community papers.

Even as it struggled against budget cuts and downsizing, the paper broke several significant stories in recent years, including that a young man killed by police in Burien was holding a pen and not a knife, as initially reported; that the Seattle Mariners were threatening to pull out of a long-term lease agreement if the team didn’t get public money for its stadium; and a report that detainees in an ICE facility were not receiving proper medical treatment.