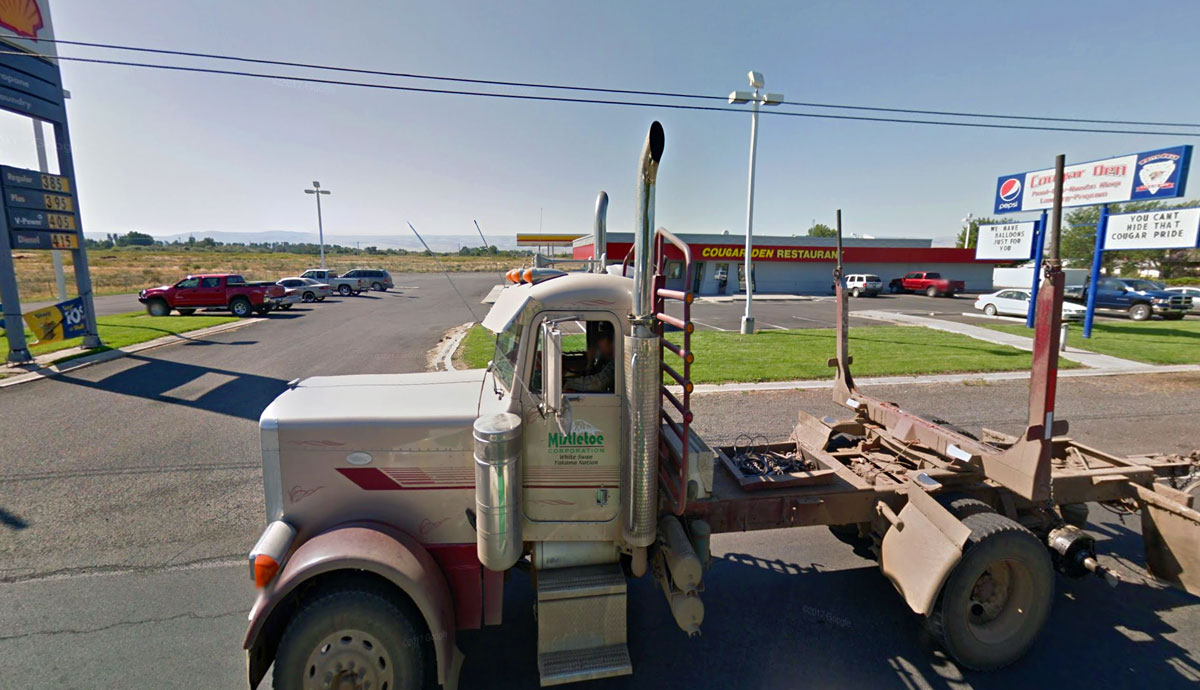 If the Supreme Court rules against Yakama Nation, Cougar Den gas station in White Swan, Washington, could owe millions to the state in back taxes. (Google Maps)

The town of White Swan sits in the heart of the Yakama Nation in central Washington. Forty miles to the west, Mount Adams — or Pahto in the Sahaptin language — towers over fields of hops and sagebrush, dazzling the landscape.

With fewer than a thousand residents, the town is a tightly knit community. Of the two gas stations in the area, locals know that Cougar Den runs a few cents cheaper than the other. That’s because Cougar Den, unlike many Washington gas stations, doesn’t pay a fuel tax on its gas. Why? Kip Ramsay, a Yakama Nation citizen, owns Cougar Den, which is a tribal entity. The Yakama Nation, like 573 other federally recognized tribes, is a sovereign nation with treaties that ceded land in exchange for health care, education and a trust relationship with the federal government.

Fuel, however, is tricky. Now, a six-year legal battle between the Native-owned gas station and the Washington Department of Licensing has made it to the U.S. Supreme Court.

Ramsay argues that he has the freedom to sell his gas tax-free, because a clause in the Yakama Nation’s treaty guarantees a right to travel without burden and, therefore, traveling with gas or other goods for sale should not be taxed. But the state of Washington insists that the treaty language doesn’t cover fuel. This is not a minor issue: Millions of dollars in back taxes and future profits for both the state, and the tribe, are on the line. If the Supreme Court sides with the state, Cougar Den will have to cough up $3.6 million, and could set the stage for other states to further tax sovereign tribal nations. But if Cougar Den succeeds, not only will the station avoid the steep fees, but treaty rights would be fortified for at least two other Western tribes in three states with right-to-travel clauses.

To Indian law professor Dylan Hedden-Nicely at the University of Idaho, it’s a distinction without a difference. “The right to travel and the right to trade are inherently interrelated,” says Hedden-Nicely, a citizen of the Cherokee Nation of Oklahoma. “The court will have to decide what this case is really about.”

The Yakama “right to travel” provision in the Treaty of 1855 is simple at base: It allows tribal members to move goods across state lines without taxation — something the tribes fought for when they ceded 12 million acres of their territory, which originally extended from the Northern Cascades down to the Columbia River.

In terms of fuel taxation, Washington state has been here before. Since 1994, the Department of Licensing has been negotiating with the state and 24 Washington tribes to split the revenue from the fuel tax. Legal scholar Robert Anderson, a professor and director of the Native American Law Center at the University of Washington School of Law, says the money is important. Even more so, however, is the “general interpretive mode” that the court may take — in plain English, the methodology and logic behind how exactly the court starts reading treaty law. That could affect how future Indian law cases are interpreted.

“Basically, since the 1830s, the Supreme Court has routinely and repeatedly held that Indian treaties are to be understood as the Indians would have understood them at the time of the treaty,” says Anderson, a member of the Bois Forte Band of Ojibwe. But in 1855, there weren’t cars in Washington, let alone a multibillion-dollar fuel business. When the Confederated Tribes and Bands of the Yakama Nation negotiated that special travel clause, they could not have known how it would ripple out for future generations.

For the Washington Department of Licensing, which argues the tax is not on travel, but on the possession of fuel, that money is a drop in the revenue bucket, though one with great financial potential. Though the state declined to comment on the case, it did add that a coalition of 12 states, the city of New York and the federal government were supporting its case.

Western states like Idaho and Montana have a clear investment in the outcome: A similar provision exists in treaties with the Nez Perce in Idaho, and the Confederated Salish and Kootenai Tribes in Montana. But for the 10 other states, the results could impact the way cigarette taxes are leveraged on reservations, because the tax structure is similar to the one on fuel. Both Cougar Den and the Yakama Nation Tribal Council declined to comment on the case.

In the coming months, the Supreme Court will have to decide which legal argument has priority. The state insists the tax is on the possession of fuel. Cougar Den counters that the tax nevertheless affects travel; you cannot travel with fuel without being in possession of said fuel.

And the right to travel is explicitly protected in the Yakama’s treaty.

“This isn’t the first go-around,” Hedden-Nicely says. “Washington has been trying to tax the Yakama Nation. But they keep striking out.”

Esmy Jimenez is a bilingual journalist covering the people and places of the Northwest.