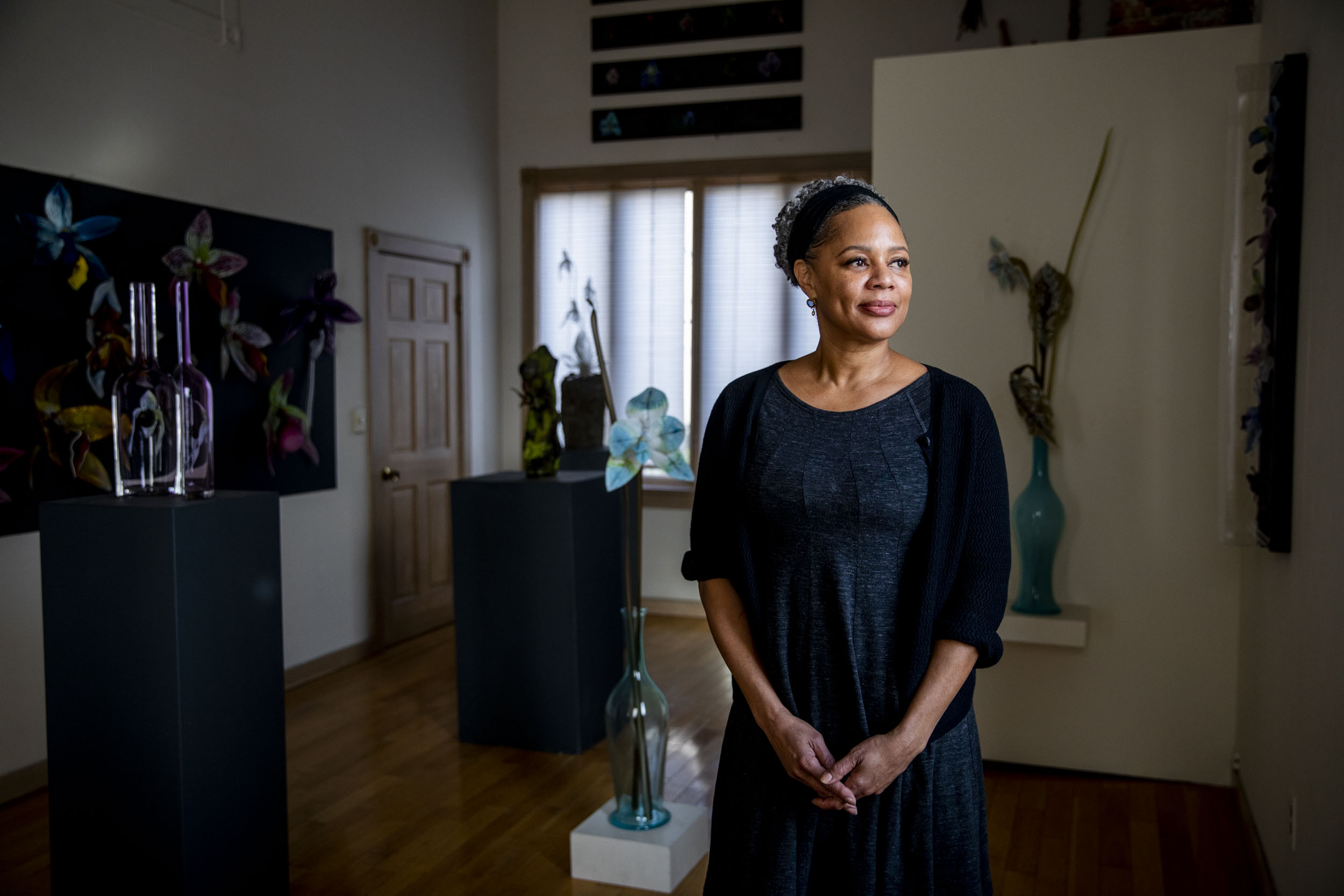 The glass art that fills the newly opened Rebecca and Jack Benaroya wing of the Tacoma Art Museum showcases the medium’s sleek capabilities — its smooth surfaces; the way it both catches light and throws it back; how it is equally adept at razor-sharp angles and undulating curves.

The art collection is impressive, but it can be difficult to escape a cold feeling with glass. There is a hardness in that perfection.

And then, set a bit apart, is a grove of glass trees.

Created by longtime Seattle artist Debora Moore, the life-sized trees resemble something out of a fairy-tale forest. Gnarled and minimalist, they seem ancient, like overgrown bonsai trees that have escaped their pots. The bark is veined and rough and, in places, velvety green with moss. The tree roots spring from heavy stones; their limbs bloom with exquisite flowers. Like real trees, they bow and branch and balance, and connect us with some shared primal existence.

When Moore first started telling people she wanted to make realistic trees out of blown glass, the response was universal. “People kept saying, ‘No one’s done that before!’” she recalls. “And I was thinking, what does that mean? Is that good or bad?”

But Moore, 59, is no stranger to breaking the glass ceiling. After taking her first glass class at Seattle’s Pratt Fine Arts Center in 1987, she studied at the renowned Pilchuck Glass School and worked at Glass Eye Studio. Soon she was among the first group of women to gain acclaim in the male-dominated world of glassblowing. She remains one of a very small number of African American women working in glass.

Interviewed in her International District studio, a 1930s building she shares with her husband, fellow glass artist Benjamin Moore, she might as well be standing in an exotic flower shop. Formerly a Baptist church and brothel (“Yes, at the same time,” she says with a grin), the space is now a showcase for the breathtaking variety of her signature glass orchids — tiny to oversized, spotted and striped, in shades of lapis lazuli, pale yellow and deep purple.

“I’ve always done trees,” Moore says. “For the last 30 years, I’ve just been asking the viewer to connect the lines.” Tall and graceful, she gestures toward a piece affixed to the studio wall, a tree made of disconnected branches and orchids. It wouldn’t stand up on its own, but there’s no doubt what it represents. Over the past several years, she set her sights on making free-standing trees. “I wanted to have a sculpture you could walk entirely around,” she says. It wasn’t easy.

Attempting something never done before means a lot of trial and error, a bit of heartbreak, and in Moore’s case, reintroducing herself to a subject she hadn’t studied since high school. After researching her vision, she knew she needed to bring in a structural engineer to ensure the trees would stay standing. “So I learned about live loading, maximum weights, I measured every little thing and kept it in a notebook — there was all of this math,” she says, laughing. “I was like, ew.”

She stuck with it (finding that even algebra came back to her), and created the first tree, a winter plum. She built it entirely in the hot shop the couple shares at the back of the house, where they’ve created countless pieces of art. Blowing and spinning, over and over, she crafted the sections of trunk and the fruit to adorn it. But there was a problem — it was unseasonably cold. Moore used a homemade system of tarps and heaters to try to keep the open-air space warm enough that her tree wouldn’t crack.

Late one frigid night, Moore drove to the hot shop to check on the temperature. She left her headlights on in the driveway, facing the workshop. Something didn’t look right. She knew she had covered the tree with a canvas, but she didn’t see its vertical form. It had fallen over and crashed. “I think I blacked out,” she says, remembering her devastation. She called her husband, who came to join her and literally pick up the pieces.

In the end, it took about two years to complete the trees for the TAM show — the stark winter plum, a gorgeously drippy wisteria, a cherry tree with cascading blooms and a flowering magnolia. (She had hoped to create a Northwest classic, the Japanese maple but, after the plum disaster, ran out of time.) As a group, the imagined forest is called Arboria. It’s not a leafy copse, but is nonetheless soft and approachable. The trees seem wise, like they might even tell us a secret, if we listen quietly. As Moore notes, aware of the metaphor implied, “Older trees have fewer branches, but the most beautiful blossoms.”

Moore is especially proud of a substance she invented to cover the “seams” between each section of trunk. Out in the hot shop, she holds up a piece of the faux moss, made with granular glass called “frit.” “I won’t tell you how I did it,” she says, “but it’s based on something I remembered from my modeling days — a kind of liquid skin that makeup artists use.” 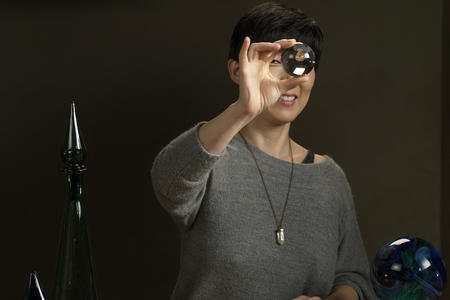 Now that she’s developed a way make the pieces, she’s ready for more. “I have to make more trees,” she says with urgency. “It’s burning inside of me! I get so worked up when I see one I want to make.”

For the moment, however, Moore is taking a break from being in nonstop creation mode for years. She says since installing the artwork at TAM earlier this year she’s been happy to curl up at home with a cozy mystery novel. But that won’t last long. “I’ve learned so much,” she says. “Now I’m empowered and able to make my dream trees come true.”