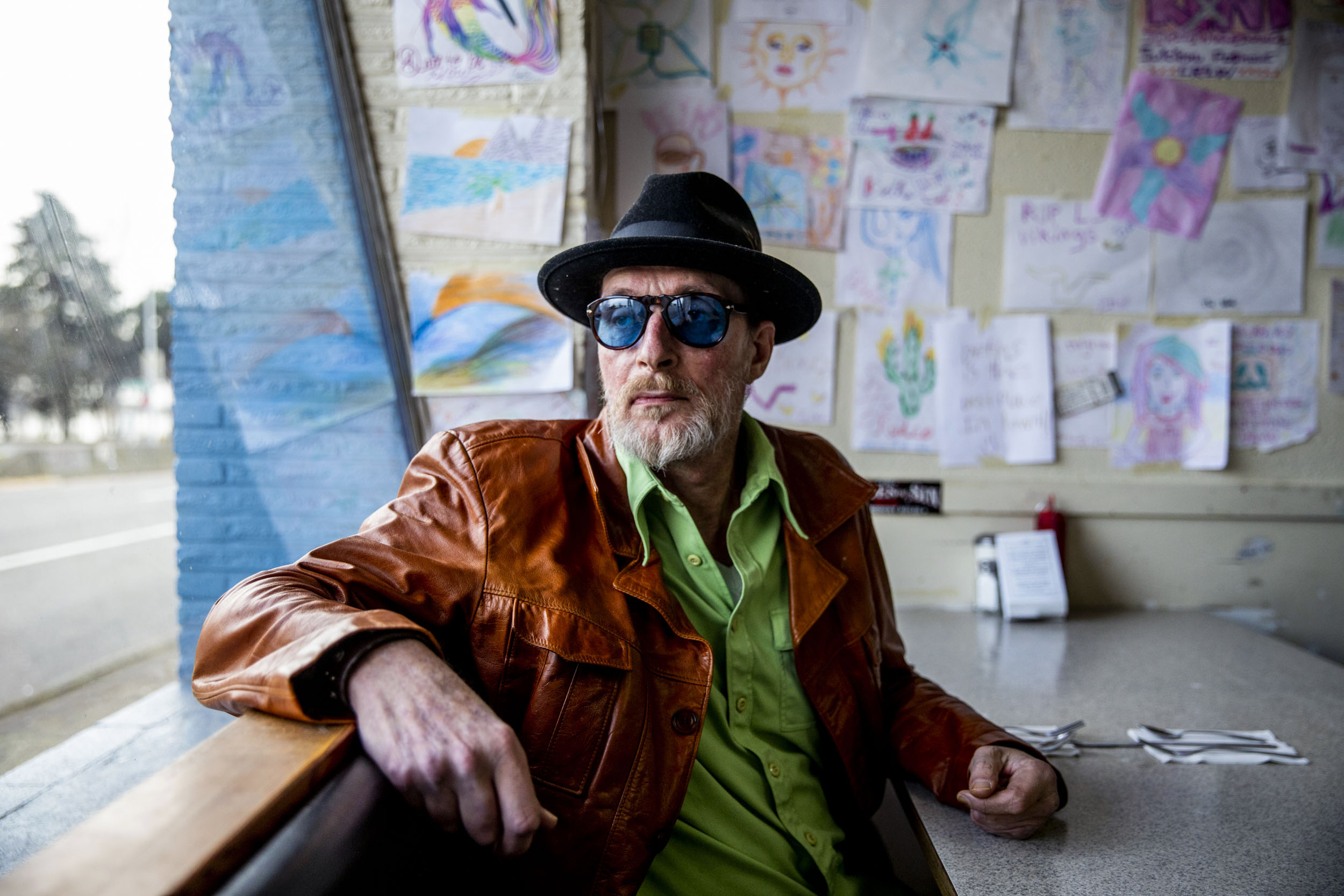 Seattle author Tom Hansen at Beth's Cafe in Seattle on Jan. 30, 2019. His memoir, American Junkie, has been adapted into a play at Book-It Repertory Theatre. (Photo by Dorothy Edwards/Crosscut)

Meeting up with Tom Hansen at the International House of Pancakes in the Oak Tree mall on Aurora Avenue, it is instantly clear he’s paid a harsh price for his more than decadelong heroin habit in the 1980s and ‘90s. The tall, lanky writer sported a knit cap, a goatee and dark sunglasses. He looked very much the part of the punk rocker he used to be. But he also leaned heavily on a cane to support a bum leg, which he nearly lost to a serious, long-neglected infection before getting clean.

From American Junkie by Tom Hansen

“The little plastic syringe glinted in my hand. It was filled with black tar heroin, the liquid like dark tea.… This was supposed to be some kind of big deal, a major mistake, some dangerous thing, starting down the slippery slope or some such, but it didn’t feel that way.…There was a feeling of rightness, like it was simply the next step in a natural progression.”

During a conversation over lunch, Hansen spoke openly about having been to hell and back. And as in his memoir, American Junkie (published in 2010 and reissued in 2017), he doesn’t romanticize or moralize about this journey or indulge in self-pity about what he has been through.

In a soft voice, Hansen spoke thoughtfully about writing the blisteringly honest memoir, which has been adapted by Book-It Repertory Theatre in a new stage version.

“Once I decided to write the book it almost became an investigation,” said the Edmonds native. “I was curious why I had chosen to self-destruct myself. I didn’t fit the story of junkies you often hear about as victims of child abuse and other traumas. But I always had this vague sense I was different from other people in a deep way.”

It wasn’t until after his fisherman father perished in an Alaska boating accident that Hansen discovered he was adopted. Later he learned his biological father was a prominent Seattle artist named Jack Stangle.

“It amazed me how much I turned out like him,” said Hansen, who from childhood displayed a talent for making visual art. “He was a self-destructive, alcoholic painter, and did a lot of the same crazy things I did.”

Hansen’s own substance abuse began with alcohol, and continued on to an escalating dependence on heroin while he played in various underground Seattle rock bands. “Everybody who takes it at first thinks, it’s not going to happen to me,” he noted wryly. “I’m not going to get strung out. I can quit when I want to. But paradoxically heroin makes you feel more alive. I’d walk around Capitol Hill with this great sense of wonder.”

To support his habit, Hansen sold drugs. And in the 1990s, during the “grunge” era, there was plenty of demand here for his product. The book details his experiences as a dealer peddling heroin to strippers and Seattle musicians, including Nirvana band member Kurt Cobain. “I got addicted to the selling, too," Hansen said. "For someone working class like me, to suddenly have thousands of dollars lying around was a big deal.”

Asked how many of the fellow heroin addicts he knew back then have survived, Hansen answered, “A ballpark guess? About half got clean, half died. There’s no in-between.”

American Junkie offers graphic, gritty account of what led up to the pivotal period in 1999 when Hansen hit bottom (“I was in some zombie, half-dead state”). He spent six months at Harborview Medical Center and Bailey-Boushay House being treated for serious physical ailments, as well as his addiction.

Turning the book into a 90-minute theater piece couldn’t have been easy, given that the lead character is laid up in a hospital bed for half the story. But this is the kind of challenge Book-It Co-Artistic Director Jane Jones (who is directing the piece and has co-adapted it with her husband and frequent collaborator, Kevin McKeon) has embraced over the years.

“Tom’s book is part memoir, part horror story,” said Jones.  “You just can’t believe the candor with which he was able to recall and reflect on his descent down the rabbit hole [of addiction].”

The adaptation premieres at a time of renewed public alarm over drug abuse.  At least 1.7 million Americans are currently dependent on prescription and outlawed opioids (from oxycodone to fentanyl to heroin). And more than 130 people die each day from overdoses.

Just as there was a spate of drug-fueled films and plays during a heroin epidemic in the 1950s, and another in the 1990s (i.e. Drugstore Cowboy, Lenny, Jesus’ Son), the past year has seen new takes on the subject in the movies Beautiful Boy, Six Balloons and Ben is Back, as well as Fire Season, a play by Aurin Squire premiering now at Seattle Public Theater.

Many addiction dramas focus as much — or more — on the anguished family members of an addict as on the addict. But American Junkie is a gritty first-person account of being in the thrall of an opioid, and in grave danger of becoming another drug-casualty statistic.

Hansen hopes his personal story demonstrates that getting clean is possible, even when someone is as messed up as he was.  But he doesn’t sugarcoat what it takes. He notes that the street heroin that addicts are using today and the synthetic painkiller fentanyl (which led to the deaths of Michael Jackson and Prince, among others) are much stronger than what he was taking. But he adds, “Quitting is possible. But it’s not easy. I had this vision in my head of a post-heroin life as trying to turn around the Titanic with an inflatable raft and one oar.”

His book doesn’t detail what finally worked for him because “there are a dozen ways for people to get addicted, and get clean: 12-step programs, methadone, martial arts, meditation, counseling. But everybody’s different, so I wanted to leave that open.”

After ending his romance with drugs, Hansen was able to help his loyal adoptive mother as she aged. He also attended writing classes at Edmonds Community College and later earned a master’s degree in writing from the University of British Columbia. As teachers encouraged him to write about his past, he began to turn out the short autobiographical pieces that would lead to American Junkie.

Said Jones, “I was introduced to Tom in 2013. I was directing the [Lanford Wilson] play Balm in Gilead and I decided to place it in the Seattle grunge period, as opposed to ’60s New York. A friend gave me American Junkie and I opened it, and read it straight through.”

“The main reason it grabbed hold of me so dramatically,” she revealed, “is because I have addiction in my own family. I witnessed something in the way Tom wrote about it that was pretty cathartic for me. I thought this is something so many American families have to deal with.”

Jones and her cast (led by Ian Bond as Hansen) have plunged into research about Seattle’s homegrown drug scenes, in the punk, grunge and present eras.

They’ve also consulted with Hansen. But he wanted to let them do their work and not “hover” over the production. He plans to attend and is very eager to see the Book-It version of his past, which, in classic Book-It style, will stick closely to his words.

Meanwhile, Hansen is nearly 20 years sober. He lives in Seattle on a modest budget (far less than in his dealer years) and continues to write. (His fictional noir thriller, This is What We Do, was published in 2013.)

“One of the themes of American Junkie is identity,” he mused, before leaving the restaurant and heading out into the rain. “Who’s Tom? What is Tom? I was very comfortable with being Tom the junkie, Tom the dope dealer. I enjoyed that story of my life. But I’ve had to let go of it and build a new story.”