U District business owners fighting upzones until the end 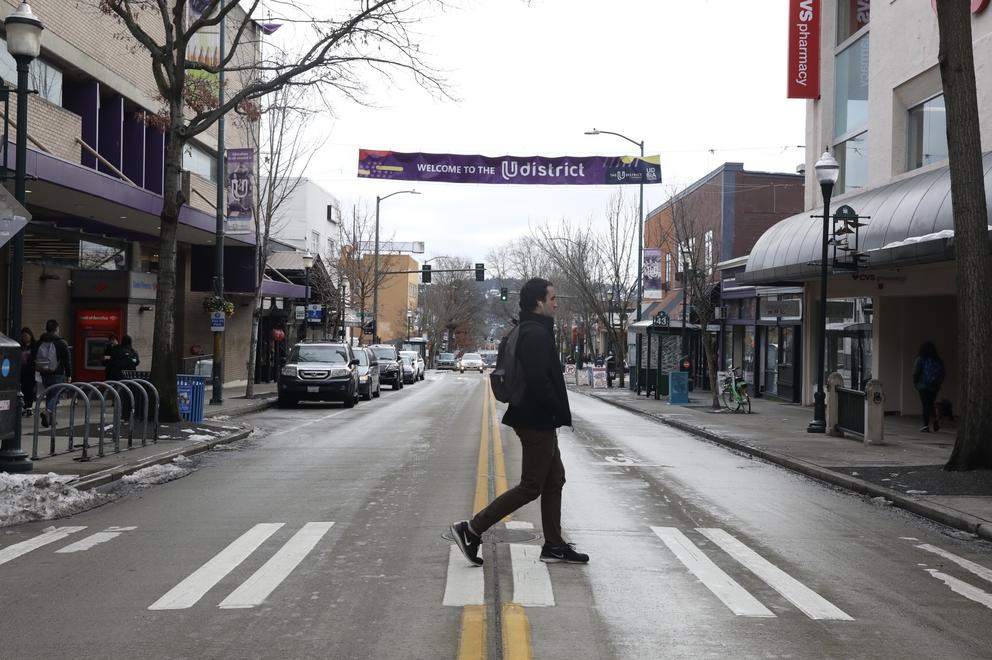 Cory Crocker wants to transform University Way. He envisions the strip adjacent to the University of Washington known as the Ave as a sort of attractive, pedestrian-friendly destination that could draw new residents and tourists alike. Change is coming to the Ave as a result of the city’s neighborhood upzone plans, but it’s not the change he wants.

Crocker is secretary of the nonprofit U District Small Businesses group and has long advocated for encouraging more foot traffic on the Ave. He believes that adding more sidewalk cafes and creating a “Pike Place Market North” feel could breathe life into neighborhood businesses currently struggling to keep up with rising commercial rents and competition from the nearby University Village shopping center.

With the University District light rail station opening in 2021, Crocker says now is the moment to make these changes. But he and his coalition of small business owners fear that the increased density that will come to the Ave as part of Seattle’s citywide Mandatory Housing Affordability program will quash their vision and hurt the small businesses they’re trying to help.

MHA’s upzones will allow developers to build larger buildings in parts of 27 Seattle neighborhoods in exchange for building affordable housing or paying into the city housing fund. The city has already implemented MHA in the University District, as well as South Lake Union, Downtown, Uptown, Chinatown-International District and along 23rd Avenue in the Central District.

When the U District’s MHA program was implemented in 2017, U District Small Businesses successfully lobbied for the Ave to be exempted temporarily by arguing that the city hadn’t properly analyzed MHA’s impact on small businesses. Now, after a year of legal delay, the Seattle City Council is hashing out the final citywide MHA program — tweaking such details as how much to increase density on certain blocks and how much to charge developers — and the Ave’s upzone is back on the table.

The small businesses group, working under the banner Save the Ave, is hoping to again keep the Ave from getting upzoned. If they succeed it will be a surprise turn of events. Eliminating the Ave’s upzone was not one of the 80 proposed amendments to the MHA legislation that council members introduced in a nearly 4 1/2 session last Friday.

Most of the proposed amendments came from district council members responding to constituent requests to scale back the size of the upzones, particularly in so-called buffer zones between commercial and residential zones on the edges of urban villages.

Johnson, whose district includes the University District, said making concessions to constituents by moving from a low rise to residential small lot designation is all about context. Buffer zones between commercial and residential areas meet his criteria. A commercial strip such as the Ave does not. Johnson told Crosscut he plans to keep the Ave’s upzone in the MHA legislation as it is written, which will allow developers to build up to seven-story buildings in exchange for affordable housing. The Ave is currently zoned for up to six-story buildings, but most of the buildings on the street are one to three stories.

Though the upzone increases the maximum building height by one story, the U District group thinks that will be enough to entice developers to finally pounce, displacing small businesses and hurting the pedestrian-friendly environment they envision. “It’s a very narrow street,” said Bulldog Newstand owner Doug Campbell. “If we maximize the development, we’re going to create a canyon. … We want to keep one street at a human scale.”

Johnson argues that not including the Ave in the MHA program will actually create more incentive for developers since it will be one of the few commercial zones in the city without the requirement to pay into the affordable housing fund. “Without MHA, you might cause a rush from developers into the neighborhood and have the opposite result of what they’re hoping for,” he said.

Save the Ave is using a similar argument in its attempt to delay or stop the upzone entirely, as it did the last time. The group claims the city still hasn’t done a full analysis of MHA’s impacts on small businesses on the Ave, as promised in a city council resolution. Johnson said staff from the Office of Planning and Community Development and Office of Economic Development conducted further outreach with businesses that’s “consistent with the request that we heard from U District advocates at the time of the U District rezone.” He said that outreach actually led to some changes in the citywide MHA policy, including reducing the Ave upzone from a maximum eight stories to seven and requiring some commercial spaces for small businesses.

Laura Bernstein, U District resident and head of the housing advocacy group Share the Cities, said she’s sympathetic to the Ave businesses owners and their very real threat of displacement. But she thinks their opposition to MHA is misdirected.

“If you get the rezone halted, nobody’s put a moratorium on your rent,” she said. “Who’s to say your landlord's not going to raise the rent or sell the building? Nothing’s changed. … Tenants are going to get screwed over and the landowners are going to get richer.”

“The best thing the city could do is getting the Ave listed as a historic business district,” said Rick McLaughlin, owner of Big Time Brewery on the Ave. “It fits the parameters as a historic district and the designation would provide more of a road block to development to help keep small business around for a long time.”

But the window to change the city council’s mind about the Ave and get historic designation is rapidly closing. The council is holding a public hearing on the MHA amendments on Feb. 21. It will vote to adopt the changes on Feb. 25, then likely vote on the final citywide MHA legislation on March 18. The U District business group has not yet given up. It's holding a Save the Ave rally on Feb. 25 at Big Time Brewery to rally neighborhood support.