What does a federal lawsuit mean for Seattle's safe injection sites?

Advocates say sites will save lives; the government warns they would violate the Controlled Substances Act. 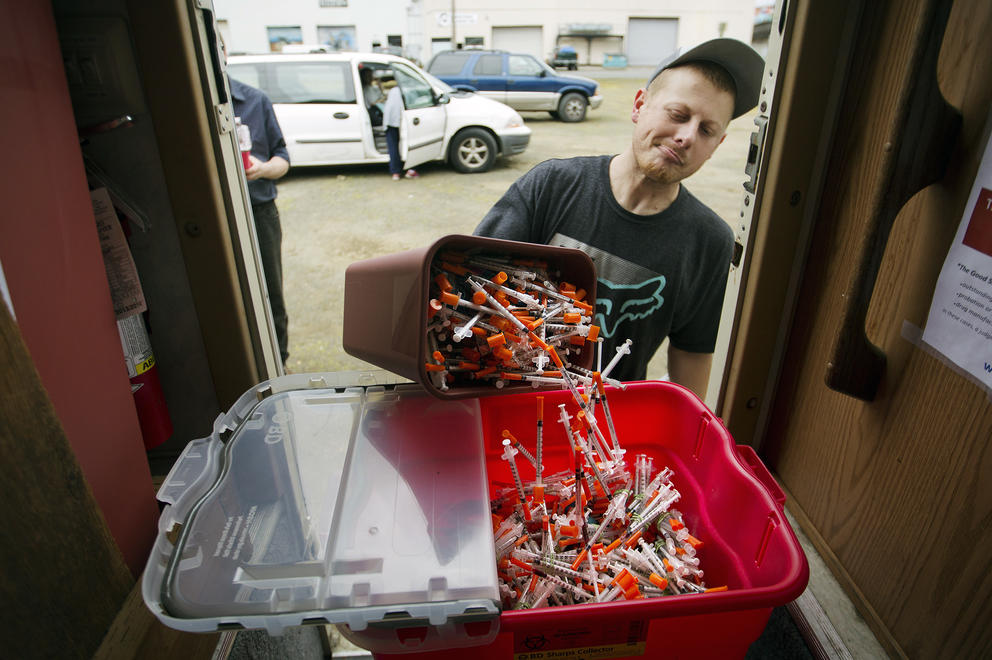 At least one Seattle official says the city should continue pushing to open a safe consumption site for users of illegal drugs, regardless of a federal lawsuit in Pennsylvania warning such sites could violate the federal Controlled Substances Act.

“There’s no reason why the threat of federal suits should stop us,” said Seattle City Councilmember Rob Johnson, who has advocated for a site since he was elected in 2015. “For me, I think we should continue to move forward,” he added.

A Philadelphia nonprofit, Safehouse, is close to opening the country’s first drug consumption site, which proponents maintain is intended to keep drug users alive and safe.

The Trump administration had previously warned cities against opening such sites. In an August New York Times op-ed, Deputy Attorney General Rod Rosenstein promised “swift and aggressive action” against cities who seek to open these sites. But in the federal government's most direct action to date, U.S. Attorney William McSwain filed a lawsuit Wednesday in federal court, warning Safehouse not to open the site.

In its lawsuit, the Department of Justice argues the “crack house” statute of the Controlled Substances Act “provides that it is wholly unlawful to manage or control any place, regardless of compensation, for the purpose of unlawfully using a controlled substance.”

“For purposes of this action, it does not matter that Safehouse claims good intentions in fighting the opioid epidemic,” McSwain wrote.

While the crack house statute has been used in the past against private landlords and property owners, this is perhaps the first time it’s been deployed against a city-sanctioned policy.

Ilana Eisenstein, a lawyer for Safehouse, told the Washington Post that she “respectfully disagreed” with the DOJ’s interpretation of the crack house statute.

The only functioning site in North America is in Vancouver, British Columbia. The space there has on-site medical professionals, clean needles, medicine to reverse overdoses and resources for people who want to get clean. Proponents see it as a preferable alternative to street use, where help for an overdose is more distant.

King County, like much of the country, has seen an increase in overdose deaths. There were over 400 confirmed or probable overdose deaths in 2018, the majority from opioids. That’s up from 245 in 2011, according to county data.

Opening a safe consumption site was one part of a broader plan hatched by local officials in late 2016 to prevent overdoses, when President Obama was still in office. But Johnson said money and coordination have gotten in the way of their opening.

He said enough money has been allocated between the city and county to operate a site for a few years, but the two government agencies must coordinate together and with the King County Board of Health, which is proving slow.

Most significantly, however, neither the city nor county has a location.

The idea has been highly controversial, triggering a signature-gathering effort to put a statewide ban to voters. The effort was successful, but the state Supreme Court ruled it was a public health matter and should not be put to voters.

Rep. Morgan Irwin, R-Enumclaw, an opponent of consumption sites, agrees with the lawsuit and said proponents should advocate for legislative change. “If folks want to engage, we live in a system where you can effect that kind of change,” he said. “But we don't live in the kind of system where you say, enough of us in this county agree and middle finger to the rest of the world.”

But while some local residents and state legislators have opposed the idea, it has majority support on both the Seattle and King County councils.

A spokesperson for the City Attorney’s Office said the lead lawyer on the consumption-site question in Seattle was recently appointed to the King County Superior Court, and the office is still digesting the lawsuit.

Councilmember Johnson, though, said he was persuaded by the arguments of the Safehouse lawyer.

Because the sites are meant to serve a public health purpose and do not distribute drugs, Johnson said he’s optimistic. At the very least, because of the suit’s narrow focus, the case should move relatively quickly and Seattle should have more answers.

The Vancouver site is hosted by a private landlord, a model Seattle had initially thought it might follow. But concerns about property seizure by the federal government have made finding a willing landlord difficult, said Johnson. The options have therefore been whittled to either finding a vacant government-owned property or using a van as a sort-of mobile clinic.

Local advocates and officials had hoped the DOJ might look the other way, as it has largely done with Washington’s legal marijuana industry. But it’s not altogether surprising that the department would ignore marijuana and crack down on consumption sites.

“I think it’s partly, the marijuana industry actually has power and is run by people who are relatively affluent and connected,” Deborah Ahrens, associate professor of law at Seattle University, said of an industry legal in 10 states. “Marijuana legalization polls very positively. There just isn’t the same constituency, either monetarily or politically,” for safe consumption sites.

On the lawsuit, Johnson said, “I don’t know now whether this announcement will cause additional political delay.” But with just over 10 months left in his time on city council — he has decided not to run for re-election — he said he’s still hopeful the city can open one before he’s gone.