Will the rise of the Eastside eclipse the Seattle boom? 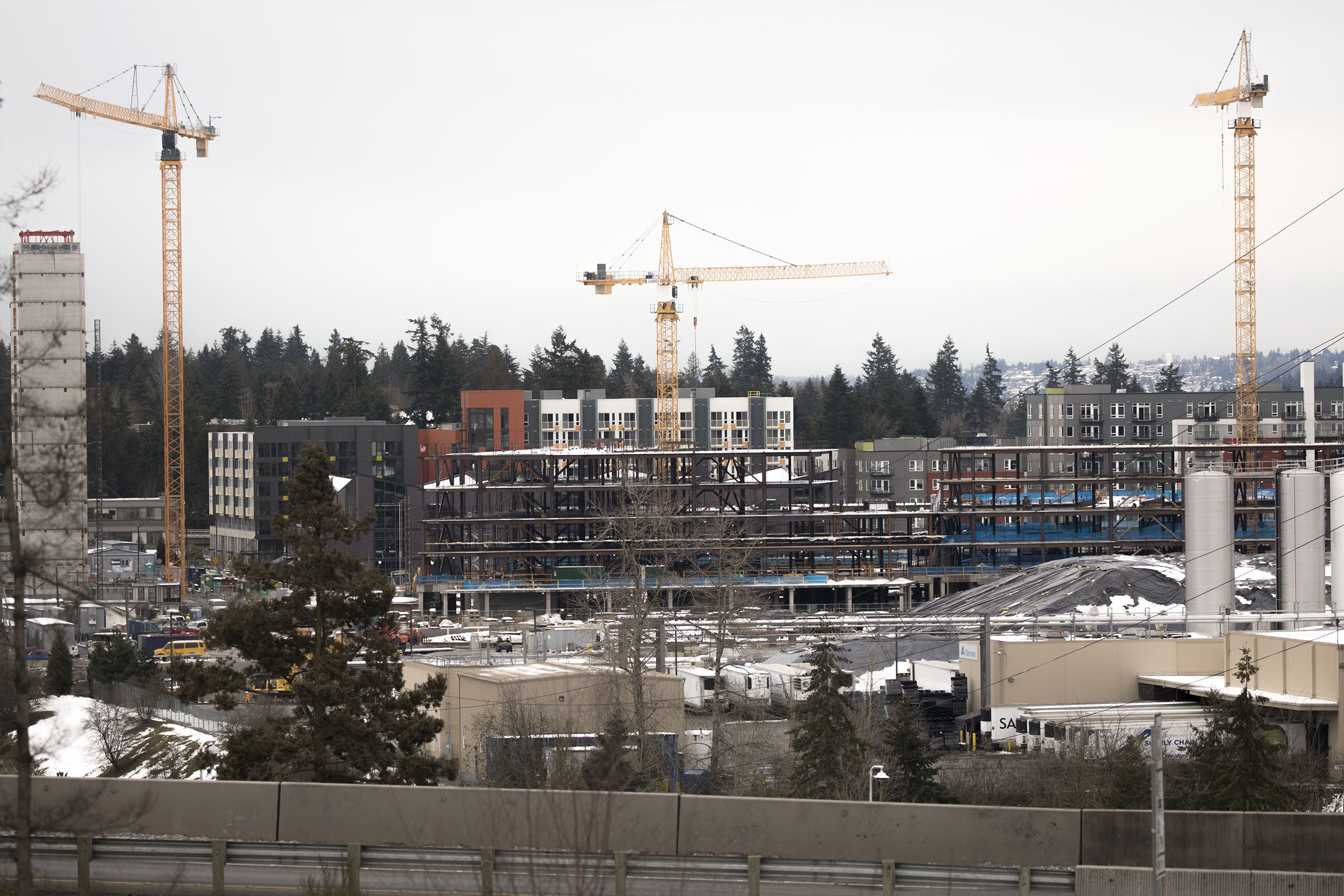 Construction cranes in Bellevue’s Spring District are a sign of how the Eastside is developing, Feb. 14, 2019 (Photo by Matt M. McKnight/Crosscut)

The Eastside has long been eclipsed by Seattle. Now, however, it is challenging the big city on several fronts. The reasons are many: Microsoft’s revival; global tech companies opening engineering offices on the Eastside; the openness of Eastside local governments to new technologies; Seattle’s problems of homelessness, crime, traffic and subpar public schools; and the Seattle City Council’s hostile actions and rhetoric directed at tech companies.

For much of Seattle’s history, the Eastside provided bedroom communities for Seattle. The only top-ranked local university and all the major cultural institutions, headquarters for businesses, banks, law firms and best restaurants were located in Seattle.

Forty years ago, Bill Gates and Paul Allen, who grew up in Seattle, moved Microsoft from Albuquerque, New Mexico, to the Eastside. As it grew, Microsoft built a sprawling campus between Bellevue and Redmond, a typical suburban office park of its era devoted exclusively to Microsoft offices, with no Starbucks, independent workout clubs or restaurants. These amenities were a drive away. Microsoft workers settled into Eastside cul-de-sacs and, as their wealth grew, they moved into lakefront homes. Early tech companies tended to locate on the Eastside, partly to be in Microsoft’s shadow and because office space was cheap. Employees’ schools and social activities were east of the lake and they visited downtown Seattle as if it were a foreign country.

But Microsoft didn’t shake Seattle’s dominance. Beginning about 20 years ago, the company began to lose its tech primacy, as Amazon.com, locating itself in downtown Seattle, became a magnet for young, talented workers more interested in urban amenities than backyards. Amazon (of which I'm a board member) grew to match Microsoft in size, but instead of its campus being an isolated suburban office park, its buildings were intermixed with a vibrant urban area brimming with Starbucks, restaurants, tech and biotech companies and smart young people. Many Amazon employees were happy to live in small apartments and, when they outgrew those, they bought single-family homes (with backyards) in Seattle neighborhoods. They began adding bedrooms, patios and remodeled kitchens, transforming neighborhoods from low- and middle-income families to increasingly high-income tech workers.

Amazon and Seattle became the place to be as Microsoft lost its excitement and reputation for innovation. In 1998, three years after Amazon began selling books though the internet, Microsoft was the most valuable company in the world and so dominant that the Justice Department sued to break it up on charges that it had abused its monopoly power. In 2006, Amazon caught Microsoft (and IBM and Google) flatfooted when it launched its cloud-computing service, Amazon Web Services. Microsoft stumbled with its ill-advised purchase of Nokia, and although Amazon stumbled when it launched its own cellphone, it recovered with a successful Kindle reader and Fire TV, followed by Alexa, a voice-operated information and control system, which again surprised Microsoft, Google and Apple. Amazon passed Microsoft in market value and became the second company, after Apple, to exceed a trillion-dollar valuation.

Over the years, more than 100 global tech and other companies followed the tech talent to the Seattle area and opened important software engineering offices. Some were on the Eastside but many more chose Seattle. In the process, the City of Seattle’s revenues grew enormously, from $2.8 billion in 2010 to $4.2 billion in 2017.

But all is not well in Seattle. School district statistics show significant disparities in public pre-K-12 schools achievement when comparing children of color and low-income families, while surveys show benchmarks of school quality have not improved much over the years. Homelessness has grown rampantly, with tent cites locating in middle-class neighborhoods, and crime and needles littering parks and playgrounds. Traffic has worsened downtown and on commuter routes. Based on Seattle police statistics, violent crime increased in Pioneer Square by 13 percent from the 2008-2010 to 2015-2017 time period.

Seattle and its citizens want to fix these social problems but have become frustrated with the City of Seattle’s inability to do so. This boiled over when the Seattle City Council and mayor passed a head tax on employers. Large and small businesses, as well as citizens, rose up in opposition. When they gathered 46,000 signatures in a few weeks, and poll results showed overwhelming voter disapproval, the city council, with the mayor’s support, repealed the tax. In response, Amazon lifted its hold on construction of new buildings.

Nonetheless, the sharp divide between Seattle’s business community and city council remains, and although Amazon has canceled its decision to locate major offices in Queens, New York, it has reaffirmed plans to locate at least 25,000 employees in Crystal City, Virginia, 10 minutes by subway from downtown Washington, D.C. It also said it intends to grow its 17 corporate offices and tech hubs across the U.S. and Canada.

At the same time, the Eastside has started to look good by comparison, although it has some of the same problems. There are homeless on the Eastside, and traffic congestion on its arterials is equal to Seattle’s. But the public pre-K-12 schools are significantly better, with some of them dominating the rankings of the best in the state. The University of Washington and Microsoft selected the Spring District east of downtown Bellevue for a new STEM graduate school, a joint venture with the leading Chinese tech university, Tsinghua University, and other global schools.

The Eastside, long considered a restaurant wasteland, has begun to have first-class restaurants. Although Seattle’s retail core is not dead, as it may be in some cities, it is outshined by Bellevue Square. Over 100 wineries and tasting rooms have located in the Eastside suburb of Woodinville. (including one owned by our family), making it a wine mecca for locals and tourists. And the Eastside finally will have light-rail connections.

Meanwhile, Microsoft has had a rebirth, with CEO Satya Nadella changing the company’s culture and focusing it on cloud computing. Its market capitalization briefly again exceeded Amazon’s, although the two jockey back and forth for first place. Microsoft also has launched a major rebuilding of its campus, even though it is mostly an upgrade to its suburban office park, having rejected a more urban rebuild. It also recently announced a $475 million loan fund for low- and middle-income housing — focused on the Eastside.

Amazon for the first time has begun to add a substantial office presence on the Eastside, acquiring or leasing several major buildings,with an announced intention to locate 4,500 employees in them by 2020. Other global tech companies are opening engineering offices on the Eastside: Facebook has hired renowned architect Frank Gehry to design a campus in Redmond for more than 1,000 employees, joining Google, which has over 1,000 workers in Kirkland. Others on the Eastside include SpaceX, eBay, SAP and Nvidia.

While several Seattle City Council members continue their anti-business rhetoric directed at tech companies, particularly Amazon, the Eastside cities are more welcoming — neither proposing new taxes on tech companies nor attempting to limit and regulate new technologies, such as Uber and Lyft car service. Bellevue has a new manager of its Transportation Technology Partnership program, Steve Marshall, whose position is funded by a technology levy. He promotes new transportation technologies to solve traffic and access problems, including mobile van services for commuters and an autonomous service for downtown Bellevue. Cruise Automation, a General Motors subsidiary that plans to launch an autonomous taxi service in the next 12 months in San Francisco, selected Bellevue over Seattle to locate its second tech engineering office. An autonomous taxi service may not be far behind.

Seattle still has its strengths. Young tech workers mostly prefer to work and live in an urban center, where networking and entertainment are abundant and nearby. Many out-of-state tech companies, including Apple and Dropbox, continue to locate in Seattle. Tech companies in the city have begun to engage in civic activism to take direct action to solve Seattle problems involving homelessness, low- and middle-income housing, transportation and public schools.

Nonetheless, if Seattle does not make greater progress in solving its social problems, will the rise of the Eastside accelerate and cap employment growth in Seattle? Will the anti-business rhetoric and actions of the Seattle City Council drive companies to the Eastside? Amazon is rumored to be subleasing rather than taking for itself 722,000 square feet of office space for an estimated 4,800 employees in the building at Fourth Avenue and Union Street, which is scheduled for completion in 2020. Will Amazon decide not to renew leases on other Seattle buildings that expire in the next few years? Will Seattle lose out to not only the Eastside, but also to Virginia, Boston, New York City, Vancouver and Amazon’s other tech hubs?

The Seattle City Council elections this year will be important in determining the answers to these questions. 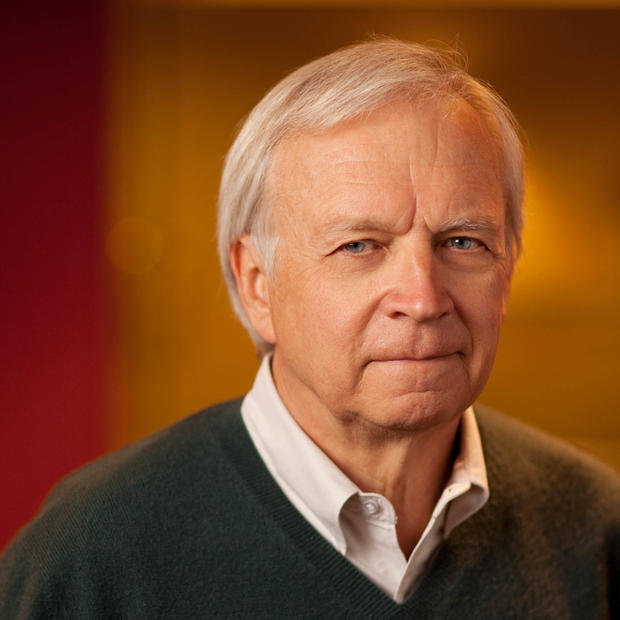 Tom Alberg is managing director of Madrona Venture Group and board member of Challenge Seattle and Amazon.com. He is also former vice chair of the Crosscut board of directors.