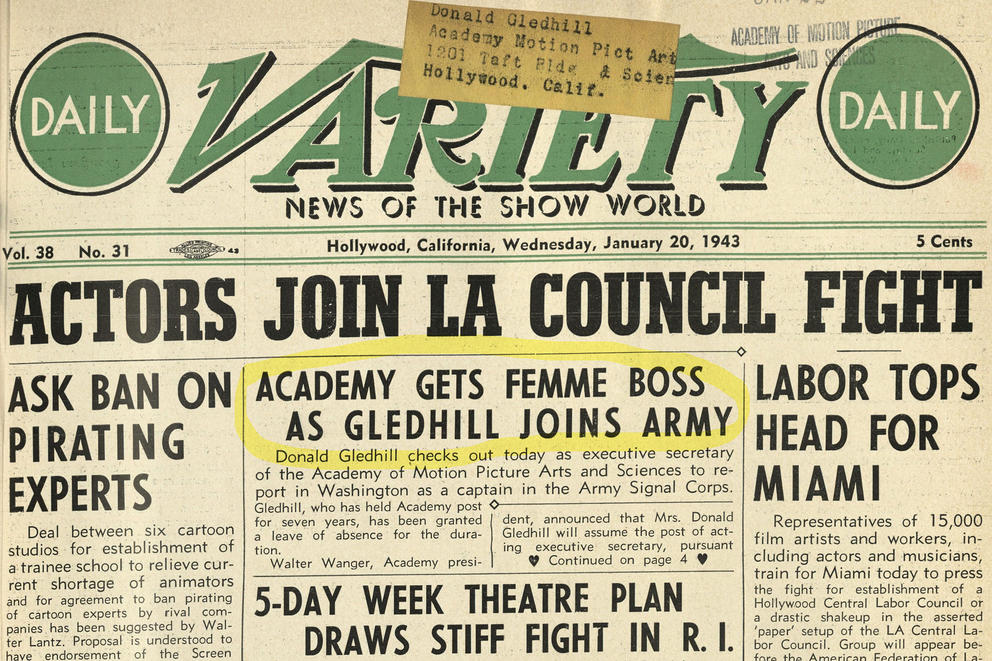 It’s a story that seems made for the movies. A girl is born in Spokane in 1902. She grows up and attends the University of Washington’s new Library School, and after graduating gets a job as head librarian of the Yakima Public Library. She meets a man, falls in love, and in 1931 moves to Hollywood, where her husband has landed a job at the fledgling Academy of Motion Picture Arts and Sciences. As he rises in the organization, she uses her library skills to help out around the office, and in 1936 becomes the official academy librarian. Then: WAR. Her husband is called to duty and she is named his replacement, becoming executive director of the academy — and earning the moniker “femme boss” from Variety magazine. Her name is Margaret Herrick.

During her three decades at the academy, Herrick (née Buck) was instrumental in getting the Oscars show televised. (It had originally been a private banquet, later broadcast on radio.) She never abandoned her librarian roots, and worked frugally within a minuscule budget to establish a thriving film archive, now the Margaret Herrick Library in Beverly Hills. She also lobbied for wider appreciation of international films, and helped establish the Best Foreign Language Film category.

On the brink of this year’s 66th televised Oscars event — one packed with foreign language films — I spoke with an expert in the field about Herrick’s legacy. Bruce Davis was executive director at the academy from 1989 to 2011, and is just completing a book on Oscar history. He’s also my dad.

So first things first: Margaret Herrick has been widely attributed as the person who named the gold statuette the “Oscar.” Given your research, is this true?

This gets complicated. There are three major claimants. There was a columnist named Sidney Skolsky, who used to brag that you could look up his column the morning after the Oscars in 1934 and see that he was the first one to use it. But he must’ve thought nobody would follow up on that. Because there is a column, and what it says is “people in the industry have begun referring to the statuette as the Oscar.”

There’s Bette Davis, who had the best story. She said when she received her award she came to the podium, saw the statuette, turned it around and noticed its hindquarters were very similar to those of her husband, who was named Oscar. But nobody called him Oscar, they called him Ham, which wouldn’t have been a good name for an acting award at all. Finally, in a book in 1970, she kind of grumpily admitted that she hadn’t really named it, and if it meant so much to the academy that they named it, they could have the credit. And by that, she meant executive director Margaret Herrick, because Herrick really wanted to be known for naming it.

Herrick is the one who allegedly said, when she first saw the statuette in the office, “It looks like my Uncle Oscar.”

But she never was able to come up with evidence [for that story], or a real uncle named Oscar. In my book research, I realized I had disproved all three major claimants. I thought it was going to have to stay a mystery. But I had a fluky discovery about a staff person, Eleanore Lilleberg, who was responsible each year for getting [the statuettes] from the foundry to where the show was going to be. I have some pretty good evidence that she started calling it the Oscar, and I explain why in the book.

This year’s Oscars is the 91st edition. What role did Herrick play in negotiating the first TV broadcast of the Oscars, in 1953?

Somewhat surprisingly, she did all the paperwork with the network executives. She was not acting unilaterally — she was reporting to the board and president of the board, Charles Brackett. But she was going to the meetings and hammering out the contracts, which was impressive — that he would delegate that to her.

And it wasn’t easy convincing people to agree to put the show on the air.

The studios in particular thought it was a terrible idea. This is hard to understand these days because we see movie stars more than we want to, but in the ’40s, a movie star was a very rare bird. You didn’t see them unless you went to the movies. The producers thought, “Why should we give away, for free, these fabulous personages that we’ve created? We’ll risk people getting tired of them, and they won’t be so special anymore.” Plus, television was seen by people in the film industry as a dangerous and somewhat hated rival. So they thought it was a very dicey move. But finally, the need for money was pressing enough that they said, “OK, we’ll do it.”

Because with TV came commercials — which meant money.

Yes. One of the ironies is that television, as a source of income, finally released the film academy from the control of the producers associations based on the East Coast. Those groups weren’t part of the academy, but they owned all the studios and kept the academy on a very short leash.

One of the kerfuffles this year was the plan (announced but quickly rescinded) to present some of the awards during the commercial breaks. Were all the awards shown on that first TV broadcast?

All of what we would consider the major awards were on the televised portion of the show. The honorary awards were done together at the end of the show, and those were not broadcast, though it was clear that some of the recipients thought they were. They would talk as though they were addressing the whole country.

What did you think about the idea to present four awards during commercials?

I wasn’t enthusiastic but I thought it was a reasonable idea to try. It’s a reaction to concerns about fall-off in audience in recent years, the feeling that there are too many awards to get the show done in three hours. So at several times, while the TV audience is watching commercials, the audience in the theater would be watching acceptances. This would be filmed in the moment, and they’d cut out time-consuming things like the march to stage and the list of boring thank yous. The heart of the speech would be recorded and later in the evening, the TV audience would see an edited version. But the academy did not do a great job introducing the idea to its own members, much less the public. And there’s a lot of nastiness out there, coming from some of the same people who’ve been complaining most vociferously about how long the show is. “Make it shorter but don’t change anything” is a hard request to fill.

What do you think Herrick would’ve thought about the idea?

She would never have even conceived of a four-hour show. I do know that at the time of that first telecast they still had separate cinematography categories for black-and-white and color. Within a few years, there were so few black-and-white movies, it was hard to field a legitimate category. And Herrick was OK with eliminating a category that had become redundant.

This year, two black-and-white films, Roma and The Cold War, have been nominated for cinematography — the first time that’s happened since the black-and-white category was eliminated. Maybe they’ll have to bring it back.

Maybe so. But Herrick offered imaginative solutions to problems over the years, and I think she would’ve been willing to try something like rotating which awards are presented live on television.

Herrick was also a big supporter of foreign films.

Yes. She used to hold weekend screenings of foreign films for academy members. She also lobbied to make it an official category [which happened in 1957, after several years of “honorary” foreign film awards]. And she was working against Cold War thinking. There was a general feeling of suspicion, about propaganda, and the danger of having foreign films shown here. There were debates on whether it was a good idea to give attention to these “commie” movies. So she was on the right side of that issue, when not many academy members were.

She probably would’ve been thrilled with this year’s crop of nominees — in addition to the official Foreign Language Award nominees, there are 21 foreign films nominated in other categories.

I bet that’s more than ever. And Roma’s many nominations help inflate that statistic. But there was another guy at the academy who worked for 30 years to bring attention to foreign films, and that’s me.

Ha! Right. You started working there in the early 1980s, so what was going on with the foreign language category then?

They hadn’t changed anything since it became a category in the ’50s. So when they’d bring foreign film directors into town, they’d take them to Disneyland. Now, Disneyland was a worldwide phenomenon when it opened [in 1955]. But by the 1980s — I mean, these were major filmmakers coming in, and they were taking them to Anaheim? There was some weird ethical stuff going on, too. Like a Swiss film guy who would send gifts to the committee, and then committee members would go stay at the Swiss guy’s house on vacation. I also worked on a better way for us to gather the films. It used to be there was one person who’d pick the foreign film to submit. We needed to get committees going in order to make the award more defensible.

Well that all sounds pretty important. But for the purposes of this story, can we say the Foreign Language Film Awards might not be so robust had Herrick not been an early champion?

It would certainly be fair to say that her nurturing of that category got things off to a good start. And on that note, I need to go fill out my Oscar ballot.

None of the maps proposed by members of the state Redistricting Commission would create a Yakima Valley district where most eligible voters are Latino, a new analysis finds.

Crosscut reporter Mai Hoang says there's more to learn about the region beyond the cursory descriptions of dry, red and rural.