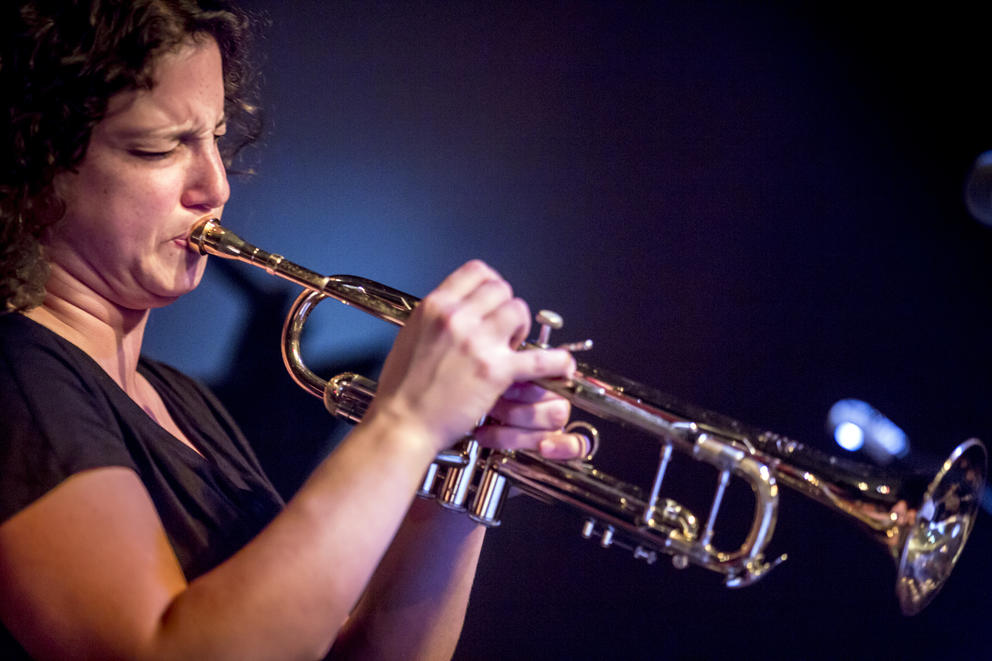 A fixture of Seattle's prolific jazz community, Samantha Boshnack is both an agile, expressive trumpet player and a wily, far-reaching composer. On Thursday, she celebrates the release of her latest album, Live in Santa Monica, recorded last year at the culminating performance of a three-month residency in Los Angeles. Boshnack will lead a seven-piece ensemble that includes horns, strings and a potent rhythm section through the album's eight rangy compositions, splitting the difference between her big-band and avant-garde tendencies. These songs tend toward a feeling of refined and respectful experimentation, and, perhaps owing to the musicians' innate curiosity, occasionally veer into incendiary soloing. The work was inspired by the indigenous cultures and mercurial geology of the Ring of Fire, that Pacific Ocean-aligned zone of volcanoes and earthquakes that Boshnack says is "where the excitement begins." –J.Z.

Quinlyn Johnson’s sculptures transform the mundane into marvels. Consider "Three Cleaning Sprays," a three-part work featuring three bottles of Windex at declining levels of “full.” The handles are made of pine, the tube of steel, the liquid of concrete. It’s an ordinary thing made beautiful. When I first encountered a photograph of the work on Instagram, I recalled a book by the Norwegian author Karl Ove Knausgaard, who, in the first installment of his autobiographical novel My Struggle, spends pages and pages describing his efforts to clean the home where his father drank himself to death. Littered with mold and excrement and other sundry vile, the house is grotesque. But Knausgaard transmutes the act of cleaning into something deeply felt, something artistic. He does this by relentlessly cataloging all the unremarkable things that define the act: A bucket of steaming water, a garbage bag, a roll of toilet paper, a bottle of bleach. These and other countless artless details build the architecture of the space rendered in Knausgaard’s house of horrors — and, in so doing, immerse the reader in the banal.

Far from being boring, this banality has intrigue, texture. Johnson’s carefully crafted bottles of Windex, like the Norwegian novel, feel immersive in a similar way. The same is true of other pieces — rolls of paper towel made of plaster, a wooden bottle of Elmer’s glue, a set of light switches — that will be on display (and on sale) Thursday at The Factory on Capitol Hill. Knausgaard shrouded his novel in death and achieved something intensely alive. Johnson, who is a 2019 B.F.A. candidate at Cornish College of Arts, has made sculptures that immortalize the mundane and, as a result, make life more interesting. –Mason Bryan

To the delight of documentary fans, architects and design geeks, the By Design Film Festival is upon us. A combined effort of Design in Public and Northwest Film Forum, the fest features films and workshops that explore the art of design. This year's theme is "Cross-Cultural Design Thinking," and film topics include radical Italian designers of the 1960s, the strange status of a hyperdesigned town in Brazil, and the devoted keepers of the last letterpress in Buenos Aires. Also on the roster is the West Coast premiere of Flying Monks Temple, chronicling a mountain-top wind-tunnel structure built specifically so that Chinese monks can levitate. –B.D.

Mozart’s genius was in writing melodies, which are charming but deceptively difficult in his later violin sonatas. (He started writing them at age 10.) Many young musicians struggle with the wit, humor, subtlety of the Mozartian phrase. Mozart also pioneered a sonata form where violin and piano have equal voices, rather than the conventional soloist with keyboard (or continuo) accompaniment. Legend says Mozart was often so late delivering written piano parts that he improvised in concert with his violinist partners. (Imagine!) That won’t be the case with Byron Schenkman and Friends, as they collaborate with guest violinist Jesse Irons in three sonatas from Mozart’s later work, and a sonata by Francesca Lebrun, Mozart’s contemporary. –Stephen Hegg

To be clear, this is more an interrogation of Aziz Ansari's current career status than an unreserved endorsement of his upcoming shows. Among the awful men of the entertainment world recently brought to light, I'd argue that the once-problematic comedian is among the least egregious offenders, a man who claimed to be a patient, woke feminist and was revealed to be a pushy, entitled lecher. The fact that Ansari is performing two nights at Seattle's grandest venue suggests that we, as a city, have forgiven his duplicity, but we should understand what's at stake in doing so. If it's at all possible to act out genuine humility and contrition on-stage — and to make it funny — Ansari, with his track record for relatable self-awareness, sensitive insight into the modern condition and seemingly genuine intent, could do it. But there are lingering questions: about the worth of a few laughs, the depth of individual transgression, the feasibility of collective forgiveness and the potential for societal transcendence via mass media. –J.Z.

Chanel Reynolds: What Matters Most

It’s the stuff of worst nightmares. In 2009, Chanel Reynolds was at a backyard barbecue in Seattle when she got a call that her husband had been hit riding his bicycle on Lake Washington Boulevard and was in the ER. He hung on for a week, but his injuries were too severe to surpass. Amid her roiling despair, Reynolds also had to contend with the administrative details a sudden accident brings to the forefront. She realized she didn’t even have the password to open his phone and call his family members. Her own lack of preparation sparked her to create a website, Get Your Shit Together, full of checklists and legal forms that you’d like to think you won’t need — until you do. It went viral. She’s now released a new book, What Matters Most, which is part memoir, part self-help guide, part legal advice (though she stresses she is not a lawyer). It’s a little hard to read — not due to the writing, which is brisk, chatting-over-coffee personal, alternately crushing and very funny — but because the whole time you’re reading, the part of your brain in charge of denial is thinking, “This doesn’t apply to me, everything’s fine! I’ll get to it later!” But if anything will make you finally write a will, get life insurance, make a folder with all your passwords, or write letters to your loved ones, this remarkable book is it. –B.D.

If you go: Reynolds is reading at several Seattle venues, including The Riveter on Capitol Hill (March 19 at 6:30 p.m.), Third Place Books in Lake Forest Park (March 20 at 7 p.m), and Hotel Sorrento for Town Hall’s Wine and Wills series (March 23 at 6 p.m.). Details at GetYourShitTogether.org.

Last week I described the ongoing relevance of "the Self-Important Rock Band with Something to Say." That was in reference to Canadian trio Wolf Parade; this week it's U.K. art-rock quartet Foals. Thanks to the group's early-career relationship with Sub Pop Records, which released Foals' excellent first two albums in the late '00s, the band has a longstanding relationship with Seattle. Since signing with Warner Bros. in 2013, they've left the indie leagues behind and graduated from crowd-surfing shows at Neumos to crowd-surfing shows at the Paramount. They remain unabashedly ambitious in their sound, incorporating elements of prog, punk-funk and Afrobeat into traditionally British guitar rock, as well as their nonmusical influences, which include Ray Kurzweil's singularity theory and, for the band's latest release, a double album called Everything Not Saved Will Be Lost Parts I & II. They also remain one of the world's great live bands and the Paramount is perhaps the most appropriate Seattle stage upon which to set their grand plan. –J.Z.

The Director’s Choice program at PNB is known for presenting tantalizing, experimental and sometimes daring dance. And this year it’s also your chance to see work by the only female choreographer on the 2018-2019 roster. (To be fair, PNB is well aware of the dearth of female ballet choreographers, and is working to correct the imbalance with programs such as its new choreography course for teen girls at PNB School.) Choreographer Robyn Mineko Williams was commissioned to create a world premiere piece, which she based on Kyle Vegter’s composition, The Trees The Trees(which includes the intriguing lyrics, “I am a handbag … I am the kind of handbag nobody weeps into”). Also on artistic director Peter Boal’s handpicked bill: the world premiere of Matthew Neenan’s Bacchus and ballet wunderkind Justin Peck’s In the Countenance of Kings, featuring music by Sufjan Stevens. –B.D. 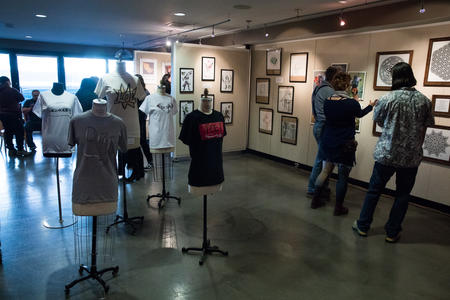 by / March 8
Article continues below