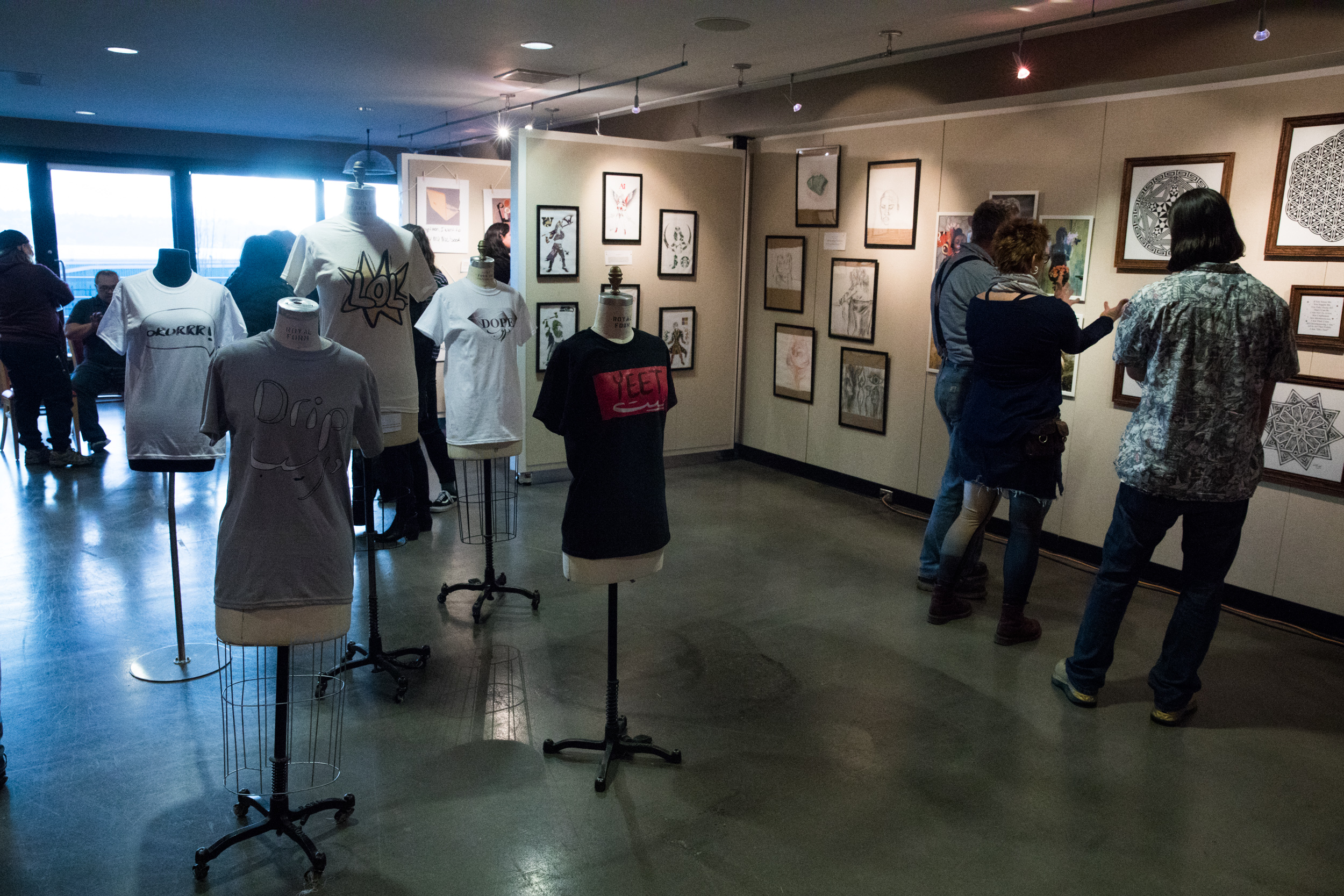 The Shenanigans student art show at the Art Institute of Seattle on March 7, 2018. The 73-year-old school is slated to shut down on Friday. (Photo by Matt M. McKnight/Crosscut)

Students at The Art Institute of Seattle took their final bow on Thursday following the sudden announcement that their school would be permanently shut down on Friday. In the shadow of the Alaskan Way viaduct’s remains, some two dozen students gathered at a campus art show. The event seemed more like a group therapy session than an art happening, with students huddled together talking about the relief that came with their school’s abrupt, but long-foreseen, finale.

“We already went through the phases [of grief],” said 20-year-old David Valmonte, standing in a first-floor gallery.

In January, the Washington Student Achievement Council (WSAC), a state regulatory and policy agency, designated the Art Institute as “at-risk of closure.” The institute’s owner, Dream Center Education Holdings, had informed the WSAC that it faces “potential financial insolvency.”

On Wednesday, the Art Institute informed the WSAC that it would close on Friday — two weeks before the end of the winter quarter. Some 650 students are currently enrolled at the 73-year-old school, which offered classes in fashion and visual design, as well as audio engineering.

The Shenanigans art show is the culminating final project of the the Rapid Visualization class taught by adjunct graphic design professor Jackie Buttice, who has been on staff since 2017. She provided pizza, popcorn and synthy beats for the student show and inside the gallery, she kept the mood upbeat.

“This is a time for healing,” she said to the room.

In a campus common room with a view of Puget Sound, portraits, drawings and sketches hung on the wall. Valmonte’s digital art lacked any color and was saturated in grays. One piece showed a skeletal hand suspended at the center.

Buttice said Valmonte struggled, given the school’s unstable conditions, and that manifested in his art, but now that it was all over there was a weight taken off.

“This class for us has been a therapy session. That’s just kind of what it turned into,” Valmonte said, adding that it’s better to feel uplifted now after carrying the heavy load of uncertainty all quarter.

Erin McGill, a veteran majoring in industrial design, said she worried she wouldn’t be able to transfer the remainder of her GI Bill benefits to another school to finish her degree.

“If I can’t transfer it completely, I lose out on all of them,” she said.

Like most of her classmates, Nikki Vetterlein, a graphic design student, said she was unsure of her future, but was staying optimistic and re-evaluating what she would do after Friday.

“I think we are all excited to just go out with kind of a bang,” said Vetterlein, who was dressed all in black with a red scarf.  “I’d rather leave on this note than an empty classroom. I think it kind of feels right.”

In a press release, WSAC said students would have options following the closure. They could transfer eligible credits to a new school, finish their degree at a new school and still receive their diploma from the institute, or have credits waived at a new school in order to graduate on time. Students could also request their student loans to be discharged, meaning their debt is cleared. More information will be available to students at a WSAC-organized fair next week on campus to help them transition through the closure.

As the art show unfolded, the rest of the school building stood abandoned. Bathroom trash cans were full, paper lightly littered the walls and floors, and people were stealing from the library, according to Buttice.

“There’s nobody here to do anything,” the teacher said.

“It breaks my heart that we aren't doing right by them,” said Scott Carnz, the dean of academic affairs at the school from 2010 to 2018. He arrived at the show to support the student artists, he explained. “There was a time when they were doing right by students and it’s crushing that has changed.”