Why I cried over this milestone moment in the Mariners' history. 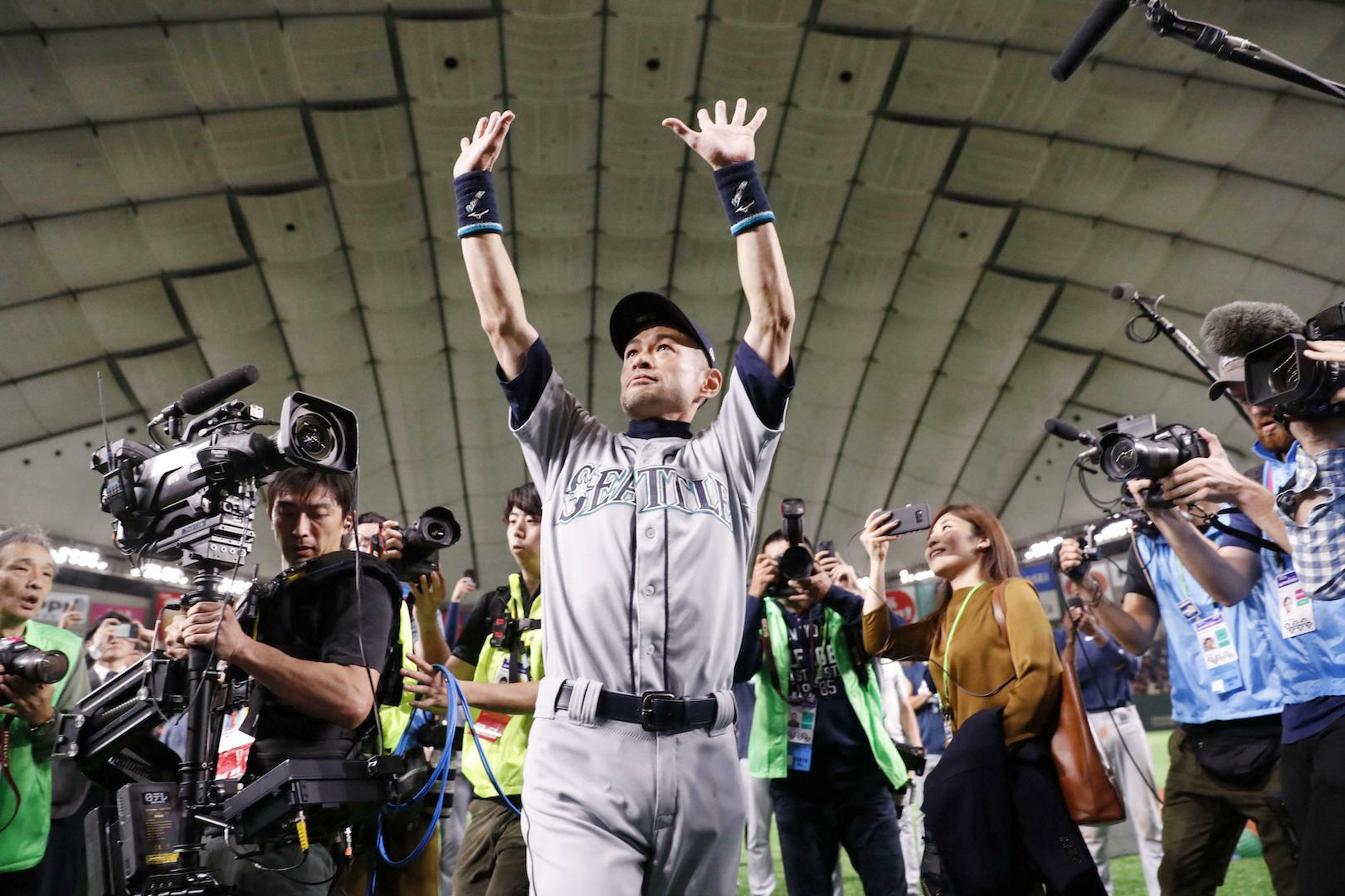 Ichiro Suzuki of the Seattle Mariners acknowledges the crowd at the Tokyo Dome after the second game of the season-opening series against the Oakland Athletics on March 21, 2019. The star outfielder announced his retirement later in the day. (Kyodo via AP Images)

As Ichiro Suzuki walked off the field a final time as a Major League Baseball player, I was on the other side of the world, watching intently. I tried to imagine which of his Mariner teammates I might be, offering a last hurrah. Playful like Dee Gordon, a soul-grabbing hugger like Felix Hernandez, or a quick “bro” embracer like most of the rest?

Then came the pitcher Yusei Kikuchi, still warm from his own MLB debut. He was crying, openly. So, immediately, was I. Like Kikuchi, I was born in Japan, albeit in Tokyo, where Ichiro played his final game during the wee hours of Thursday. Baseball is in our DNA, in a way that it no longer is lodged in Americans or other people around the globe. The culturally uncharacteristic show of emotion was, for Kikuchi and me, I like to think, not just mourning the end of Ichiro but celebrating the improbability of him, the way I once wept when Barack Obama was elected as our first Black president.

It’s easy to forget that when Ichiro started with the Mariners in 2001, it was conventional wisdom that Japanese position players could not handle major-league pitching. Hurlers preceded him — Hideo Nomo won the National League Rookie of the Year with the Dodgers in 1995 — but Ichiro was the first Japanese non-pitcher to appear in an MLB game.

When I was in college, I witnessed the kind of inferiority complex that fed into that absence of Japanese position-player precedence in the U.S. I’d been the sports editor for a local weekly newspaper chain and had boldly written to the commissioner’s office of Nippon Professional Baseball of my impending trip to Japan. Somewhat unexpectedly, they set up several visits, including one to the Tokyo Giants, where I watched part of the game from their dugout and, beforehand, met Sadaharu Oh, the Japanese Babe Ruth.

There were American players in Japan — tellingly referred to as gaijin, or foreigners — who told me tales of the Japanese wanting them to do well, but not too well. They couldn’t touch Oh, for example. If any approached his hallowed home run records, they’d go long periods without being pitched a strike. That tactic was on full display a few years later, in 1985. Heading into the last game of the season, an American, Randy Bass, was one home run short of Oh’s single-season record of 55. Against the Oh-managed Giants, Bass was intentionally walked four times, each time on four straight pitches.

Baseball may have once been the “national pastime” in the U.S., but the Japanese had their unique stamp upon the game. And they worked to preserve it. They trained harder. They cheered louder. They played more for collective achievement. In his classic 1977 book, The Chrysanthemum and the Bat, the American Robert Whiting wrote, “The Japanese view of life, stressing group identity, cooperation, hard work, respect for age, seniority and 'face,' has permeated almost every aspect of the sport.”

As such, the reverence for Oh always came with something of a caveat — he was half Chinese. In a homogenous society like Japan’s, that meant something. The purity that Ichiro represents also matters, greatly. At 5 feet 11 and a lean 175 pounds, he is typically spritely for Japanese. His Zen-like approach to the game felt familiar in his homeland. The breakthrough of a player like this was celebrated in a way I don’t think would be the same if, say, a physical specimen like Shohei Ohtani, the California Angels’ two-way sensation, had come first.

Ichiro’s overt Japanese-ness came with a cost in the U.S. His “rightful” star status was debated throughout his Mariner career, during which there were whispers that he was a selfish player. To some, he did not take enough outs to advance teammates, or hit with the kind of power everyone thought he possessed. He was too wedded to batting leadoff but did not walk enough or steal enough bases to justify it. Though teammates have celebrated his sense of humor, a swath of the public bemoaned Ichiro for being too aloof and too rarely stepping from behind the language barrier. Fans and media members complained that they did not “know” Ichiro.

I don’t know Ichiro, either, not personally, but I do know him from the traits I recognize from a culture germinated in a tiny, isolated island nation: work ethic, conformity, sticking to successful routine, maximizing resources, and obsession over not wanting to offend, even to the point of saying nothing. I forgave Ichiro his translators, remembering the way my mother used to misspeak in her second language (English) and endure ridicule for it.

Ichiro succeeded by staying so true to his societal roots that his baseball rituals have become instantly recognizable memes. That stretch that a lot of us Asian Americans recognize as the “rice-paddy squat.” The slight flex of the back after stepping into the box, followed by the extension of his bat, as if a Samurai sword. We remember these because he gave us unparalleled achievement, with or without regard to race or national original.

He didn’t do everything, but Ichiro hit and fielded at unprecedented levels. He owns MLB records for hits in a season (262) and consecutive seasons with at least 200 hits (10 straight). He earned 10 Gold Gloves and 10 All-Star berths. He was named Rookie of the Year and Most Valuable Player after leading the Mariners to an MLB record 116 victories and a playoff berth they have not duplicated since. He twice led the American League in batting average. He has as open-and-shut a case for Hall of Fame status as any athlete who has played in Seattle, including his former Mariner teammate Ken Griffey Jr

Unlike Griffey, who played with his cap backward and a grin on his face, Ichiro mostly remained stoically Japanese and therefore an enigma to many. That fact is a big part of why I shared tears with Yusei Kikuchi earlier Thursday. This country remains slow to embrace differences, does not take the time to recognize obstacles endured by others, and therefore does not truly comprehend the extraordinary nature of witnessing a career like Ichiro’s through eyes like mine.

It’s a miracle I never wanted to keep all to myself.