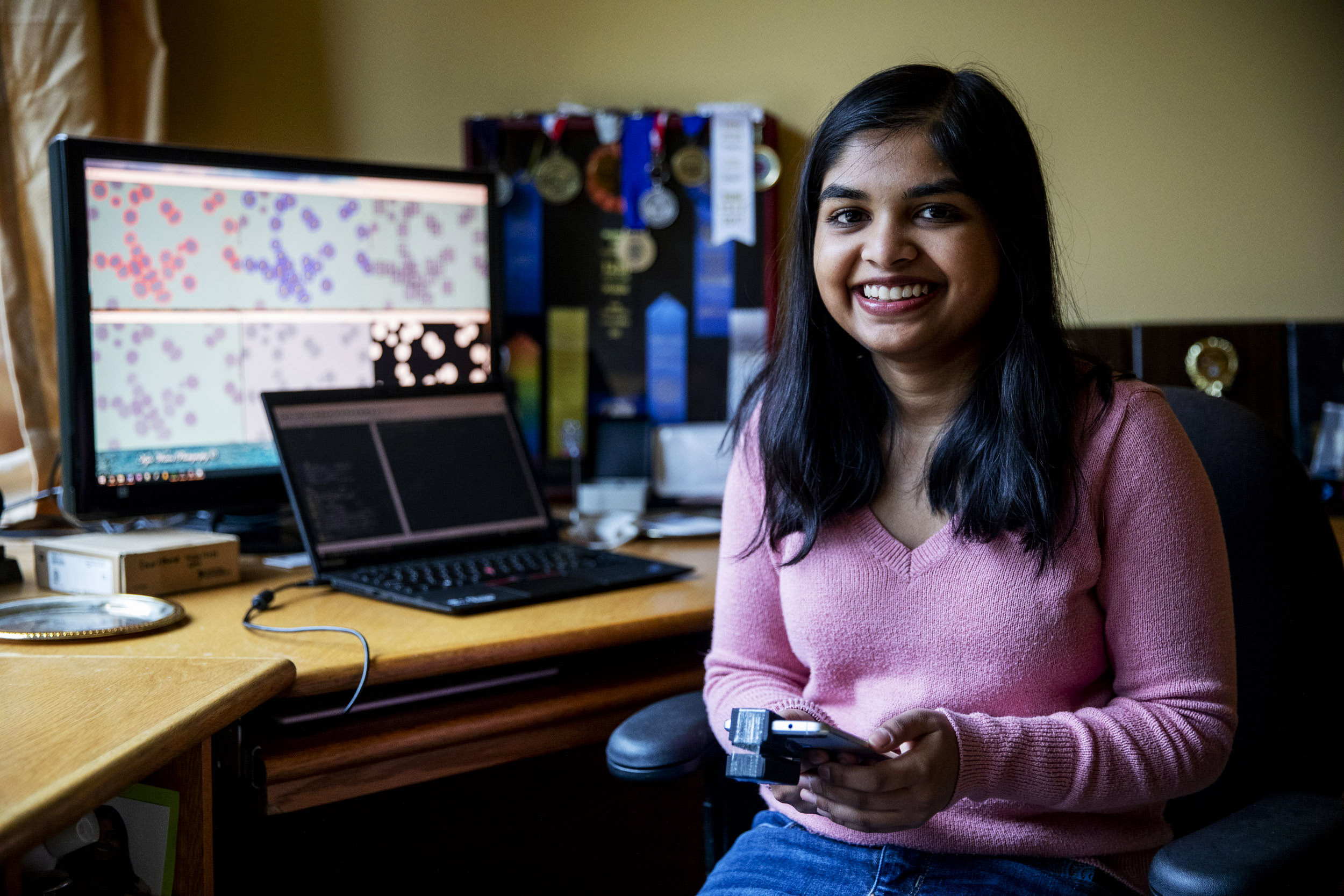 Interlake High School senior Eshika Saxena in her Bellevue home on March 25, 2019. Saxena invented a smartphone microscope attachment and web application that together can detect sickle cell disease from a blood sample. She is working with a nonprofit to get the device distributed in the Indian state of Odisha. (Photo by Dorothy Edwards/Crosscut)

Access to health care is a global problem. According to a report from the World Health Organization, as of 2017 at least half the global population doesn’t have complete access to essential health services. Where they do, costs for many can range from problematic to prohibitive. “Eight-hundred million people spend more than 10 percent of their household budget on health care, and almost 100 million people are pushed into extreme poverty each year because of out-of-pocket health expenses,” the report found. That poses huge problems for curbing side effects from diseases that require early diagnosis, like sickle cell anemia.

But what people do have access to in some emerging economies is smartphones: According to Pew Research Center, countries like Kenya have seen smartphone ownership among adults grow from 15 percent in 2014 to 41 percent in 2018; ownership in Nigeria has grown from 27 to 39 percent over that same period.

In 2017, Interlake High School senior Eshika Saxena of Bellevue made a connection between the health-care access crisis and the smartphone boom. The then-sophomore had been interning at the University of Washington’s Ubiquitous Computing (Ubicomp) Lab for two years, where she had explored how the mobile tech in our pockets has the power to bring crucial health services to access-strapped people in as-yet-unexplored ways, especially where blood tests are involved.

Two years and many late nights later, Saxena completed HemaCam, a machine-learning web app that can employ any smartphone to diagnose sickle cell disease with 95 percent accuracy when combined with a 3D-printed microscope that attaches to a smartphone’s camera. To date, she’s received $62,000 in scholarships and awards. Most recently, Saxena and her project placed 10th out of more than 2,000 students in the national Regeneron Science Talent Search, earning her a $40,000 scholarship.

“In a lot of areas around the world it's difficult to get basic screening or medical care,” Saxena says. “Even though a microscope is a fairly common [piece of] lab equipment, it's still quite expensive and a lot of the clinics [abroad] don't have access to microscopes or enough trained professionals to screen for diseases like sickle cell. They do have access to a lot of smartphones, and a lot of smartphones are being recycled nowadays, so I just thought we could really use this powerful device that all of us have in our pockets to solve another problem.”

Saxena is now in talks to make HemaCam available to the Indian state of Odisha through a nonprofit that focuses on fighting sickle cell disease. India has lower smartphone ownership than much of the world — but all it would take is one phone per clinic to conceivably make a difference.

“Thousands of potential sickle cell patients are unable to afford screening for it, and the current screening centers [in Odisha] have been overloaded with patients and even though there's a low-cost medication, a lot of people don't know whether to take it because they haven't been diagnosed,” Saxena says.

Saxena got the idea for HemaCam while listening to inventor Manu Prakash speak at the 2017 Intel International Science Fair a few years ago. Prakash developed a foldable paper microscope that costs less than a dollar.

Saxena had been exploring smartphones’ medical use through projects at the Ubicomp lab, where mentor and UW computer science Ph.D. candidate Edward Wang developed an app to estimate hemoglobin levels using a smartphone camera. Saxena learned that microscopes are used for diagnosing many blood-related diseases: Doctors take blood smears and look at individual cells for abnormalities in shape, color and size.

“AI [artificial intelligence] has become so advanced nowadays — so I thought this could be a process that could be automated, and it would be able to help people all over the world,” Saxena says.

HemaCam’s clip-on 3D-printed microscope attaches to any smartphone camera lens. Users at a clinic simply insert a blood smear into the clip-on microscope, take a photo of it, and send it to the web application, which uses a machine-learning algorithm Saxena programmed to identify sickled red blood cells.

“One of the real challenges I had was actually finding red blood cell image data to train my models,” Saxena says. After looking for publicly available data and established databases and coming up short, she sourced 7,000 blood smears showing both healthy and sickled blood from the University of Washington. “I took images of those with my microscope and then used my software to ID each cell image, and was able to create a database large enough to train my model.”

To both reduce her product’s carbon footprint and cost, Saxena sourced the microscope lenses from discarded smartphone cameras. By reversing the lenses, she was able to achieve between 350- and 400-times magnification.

“What is fantastic about the HemaCam idea is that it aims to address the difficulties of blood examinations in low-resource situations where hematologic labs are unavailable,” Wang says. “With the combination of utilizing existing computational infrastructure, cheap augmentation, and powerful software, it would be possible to significantly reduce the number of people whose disease may go undiagnosed in the future."

Saxena’s program is most useful to adult sufferers of sickle cell who have gone undiagnosed or may have been misdiagnosed. According to Alix Dassler, of Seattle Children’s Sickle Cell Team, the majority of sickle cell patients in the United States are diagnosed soon after birth, as sickled cells tend to materialize in the afflicted within a few months. Diagnosis near birth is much less common in developing nations.

“Many believe that the estimated number of people living with sickle cell in sub-Saharan Africa and other parts of the world is much lower than reality, as people with sickle cell are not diagnosed, and thought to have passed from malaria,” says Dassler. “If they are properly diagnosed, and diagnosed early, the appropriate treatment can be initiated and lives can be saved.” 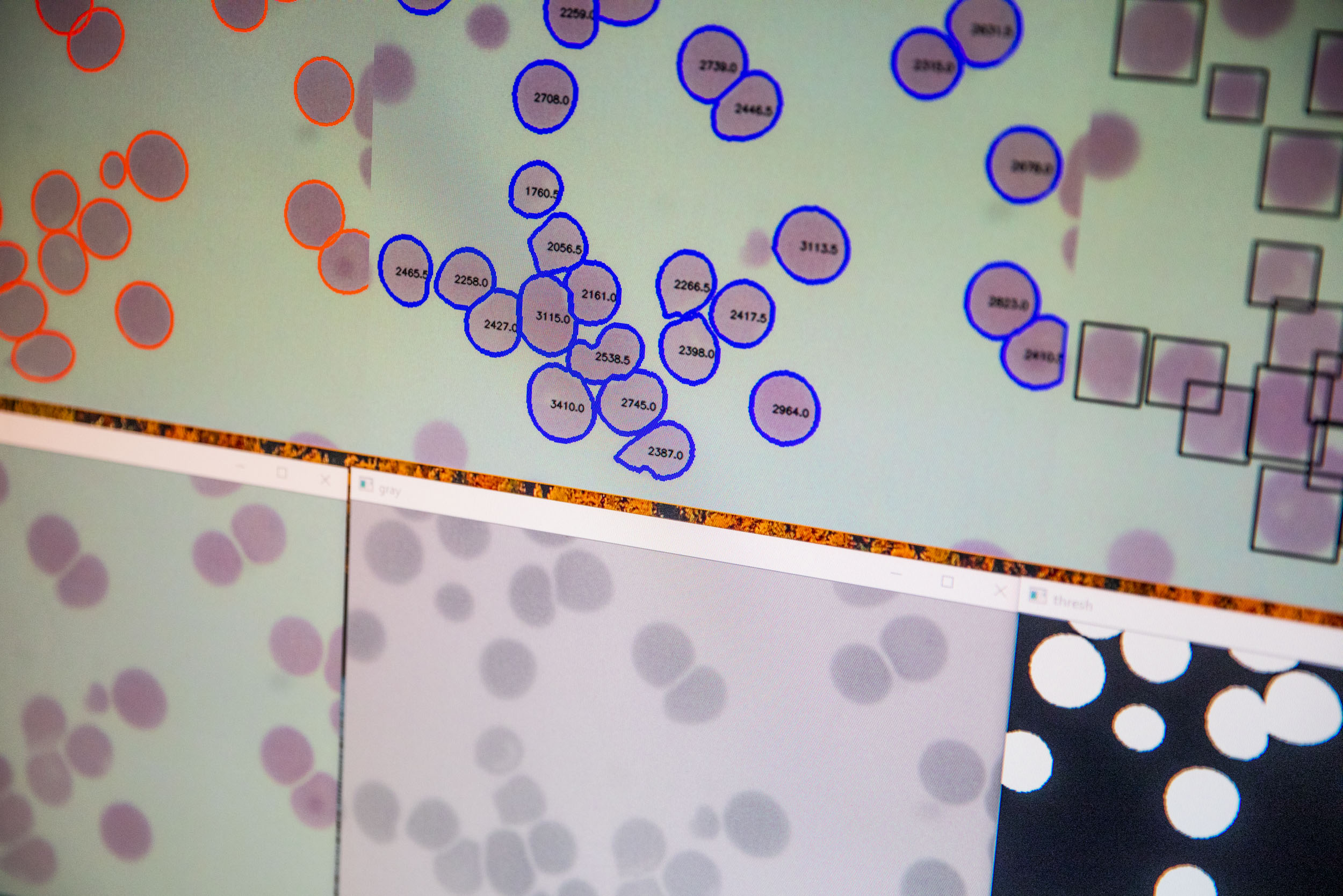 Eshika Saxena invented a smartphone microscope attachment and web application that together can detect sickle cell disease from a blood sample. In this sample on her computer, the affected cells are presented as an almost-crescent-moon shape. (Photo by Dorothy Edwards/Crosscut)

Eshika Saxena invented a smartphone microscope attachment and web application that together can detect sickle cell disease from a blood sample. In this sample on her computer, the affected cells are presented as an almost-crescent-moon shape. (Photo by Dorothy Edwards/Crosscut)

Saxena’s passion for computer science began in fifth grade. As the child and little sister of computer science enthusiasts, she started competing in science fairs and working on projects out of her garage. She taught herself to code in Python in eighth grade.

“I just really enjoyed applying math and logic to make things run on the computer and I thought that was really cool,” Saxena says.

“Eshika is a great combination of intelligence, diligence and drive,” says Daniel Peterson, her AP computer science teacher at Interlake, who has been an adviser to her for four years. “She’s not interested in showing off how talented she is, but she [is interested] in developing [software] for the betterment of people.”

By junior high, Saxena needed tools and mentorship beyond what her garage could offer. So she began investigating local lab opportunities.

“When I'd go to the science fairs, I'd see all these high schoolers with all these complicated-sounding projects and a lot of them had worked in labs,” she says. “So I wasn't really afraid to reach out to universities and see if someone would be willing to help me.”

Her desire to use computer science to solve health problems began early: After getting food poisoning during a trip to India, she’d wanted to see if there was a way to use technology to analyze her food and prevent that experience. Identifying food poisoning proved beyond her grasp, but in reaching out to a number of labs, Saxena got help from Wang in developing a project she would eventually call Molecule ID: a portable spectrometer that pairs with AI to analyze the composition of food samples, looking specifically sugar content.

"The quality that makes someone effective as a scientist is the ability to identify a need, dissect the problem, identify the specification that would be needed to tackle the problem, figure out the limitations of current solutions, work towards a new solution that solves the problem better than current solutions through the specifications that is identified, and iterate on the solution,” Wang says. “Eshika is still early in her career as a scientist and has already been through this process many times."

Saxena spent a summer interning full-time at the Ubicomp lab; she stayed on at the lab as a part-time intern for four years. In that time, she pitched and launched an additional project, VitalSight, before dedicating herself to HemaCam.

Saxena got the idea for VitalSight after FaceTiming with her sister. “She complained about being sick but she didn't have a thermometer, so I was inspired by SnapChat filters and I wondered if there was a way to remotely check her vital signs or her temperature,” Saxena says.

She started reading about computer vision and video analysis, and ended up writing a webcam program that can remotely measure heart rate.

“If you look into a webcam, my code measures these tiny color changes in your skin that correspond to heart rate and use that to calculate heart rate,” she says. “It's a really powerful application for people who can't have heart rate monitors, [but] who need contactless, continuous monitoring of heart rate.”

In developing these projects and attending science fairs, Saxena realized she was different from most competitors.

“I really noticed a lack of diversity and girls, especially in a lot of STEM-related events, and it was a little discouraging and disheartening for me as I was super passionate about pursuing computer science,” she says. She started the nonprofit TakeKnowledGe with her older sister to “encourage kids in my community and beyond to see the wonders of technology.”

Through TakeKnowledGe, Saxena has mentored fellow students through robotics and math competitions, and organized workshops for organizations like the Girl Scouts.

“It's a lot of fun, and I've found I really enjoy teaching,” she says.

For the future, Saxena plans to study electrical engineering and computer science with a focus on AI research at the University of Washington, Caltech or MIT, her sister’s alma mater. She may eventually update HemaCam to become more effective at discovering sickle cell in infants.

“In research, persistence and staying motivated are key,” Saxena says. “I think after completing a project or getting some tangible results, it feels very rewarding to see something I've developed actually have an impact. When I'm talking to the organization in India, I really realize that the things I'm working on can really affect people's lives.”