Boeing will fix this problem — but can the company fix itself? 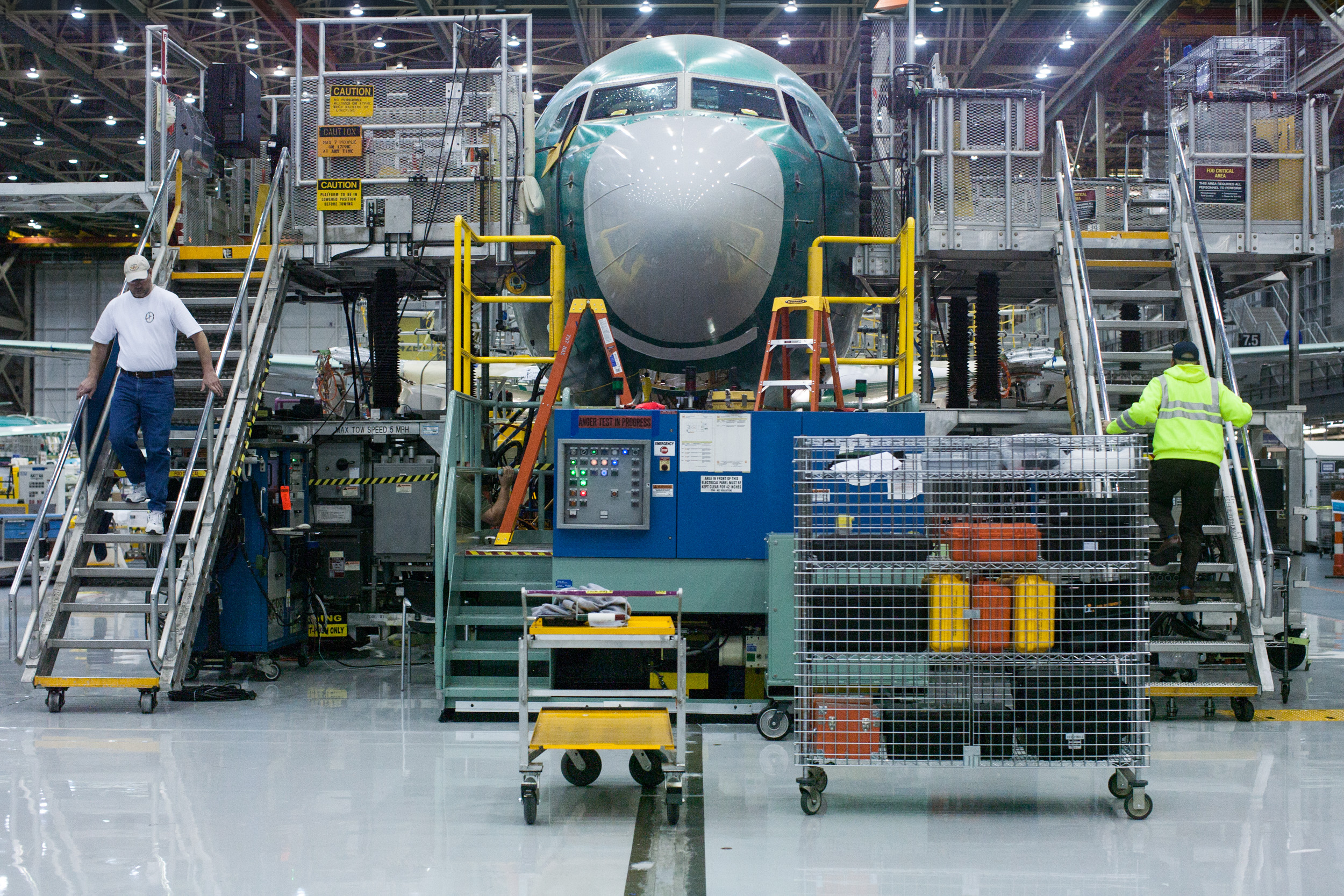 Boeing employees march up and down stairs entering and exiting Boeing 737 MAX 8 during a media tour of the plane at the Boeing plant in Renton, Dec. 7, 2015. (Photo © Matt M. McKnight)

Flying commercial jetliners is one of the very safest ways to travel.

Which is of zero consolation to anyone who’s been touched in any way by an airplane crash.

In 2013, for example, more than 32,000 people were killed in driving-related accidents in the U.S. That compares with 443 killed in aviation accidents, of which 367 involved private planes – not commercial aircraft.

Still, if anything goes wrong with an airplane, it’s a catastrophe. A fatal auto collision is a tragedy; an airplane crash is a seismic, communitywide gut punch. Insurance companies make clever commercials about protecting you from car mishaps; nobody in the world of advertising touches flight insurance with a 10-foot cockpit squeegee.

And as something becomes rarer, it becomes more trenchant, more remarkable, so horrifyingly uncommon as to command even more attention.

And yet, from the time when every aircraft was experimental (because they were all new), flying has only gotten safer.

While President Donald Trump can blithely tweet: “Airplanes are becoming far too complex to fly. Pilots are no longer needed, but rather computer scientists from MIT. I see it all the time in many products. Always seeking to go one unnecessary step further, when often old and simpler is far better. Split second decisions are needed, and the complexity creates danger,” in fact, over the 100-plus years of aviation history, flying has grown safer as the aircraft have become more complex.

By now, everyone is well aware that a pair of Boeing 737 MAX jetliners have fallen out of the sky for no apparent reason, first in Indonesia on Oct. 29 and most recently last Sunday in East Africa. Together, the crashes killed 346 people – everyone on board – and spread turbulence around the world.

Perhaps this is true nowhere more than here, in what was once the Jet City, where Boeing still has about 80,000 employees, and in Renton, where more than 10,000 workers, in part, crank out nearly 50 737s a month. When a plane goes down, everyone there, from designers to engineers to shop-floor mechanics, stops and asks, “Did I work on that plane?”

The Boeing 737! The world’s all-time best-selling jetliner, the workhorse of airlines great and small, the plane so many predicted would fade into history, but instead regularly gets reinvented to become the little pair of engines that could. The 10,000th 737 rolled off the Renton assembly line just one year ago. The 747 had size; the 777 has elegance; the 787 has gee-whiz technology; but the 737 has resilience.

And when two of them crash within a few months, perhaps something is wrong.

What caused the crashes? It’s too early to say.

It could have been a faulty sensor. Some supposition on the Lion Air crash is that the anti-stall mechanism kicked in, pushing the plane’s nose down so it could pick up speed and pull out of the stall. The pilots, the theory goes, should have killed the auto-mechanism to retake control of the plane. This, the theory goes, they did not do. Although Lion Air has worked to improve its safety practices, it has been criticized for them in recent years.

Ethiopian Airlines is regarded as a stand-up operation and there’s no reason to suspect that its excellent pilots weren’t properly trained. Nonetheless, the Federal Aviation Administration, in grounding the 737 MAX fleet in the U.S. this week (following the lead of basically the entire rest of the world), has hinted that there are similarities between the two incidents.

The orange boxes — they only turn black after the fires that usually accompany jetliner crashes — are still being dissected. In time, the cause will become clear and a solution will be found. The latter-day company that builds them, Boeing, is still pretty good at building things, and also at fixing them.

And still, when a single plane crashes, the results are terrifying, horrifying, unconscionable. Hundreds of lives, gone in an instant.

And still, flying has gotten safer.

Predictions of impending danger have been regular and endless. The deregulation of airlines in 1977 created a flock of nearly fly-by-night operations that featured lower ticket prices and short operating histories.

Some folks predicted that the sheer rising number of passengers and flights would mean that accidents could increase even as flying got safer. Apparently, not so much

The chorus of hand-wringers suggested that the declining number of military pilots — who learn how to pretty much get out of anything, and who used to provide airlines with regular squadrons of rigorously trained employees — would mean more accidents.

Even when things did go wrong, problems were addressed and solved. After a couple of 737s suffered what appeared to be uncommanded rudder movements, causing the planes to head groundward much too soon, Boeing announced in the mid-’90s that it had found a cause, and fixed it. Heralded at the time as Boeing finally admitting that there was a problem with the jet, it was actually just the company announcing, after several years of trying, that they found a way to replicate the problem so they could make it right.

Doomsayers predicted that all the software code in the 777 would result in myriad problems. To date, in nearly 25 years of service, the 777 has been involved in nine incidents, only two of which involved fatalities.

And still, flying just got safer. The Aviation Safety Network found that fatal airliner accidents fell from more than 4.0 accidents per million flights in 1977 to under 0.4 per million in 2017. If you look more closely at the numbers, statistically speaking, you’re in more danger on the ground than you are in the air.

The problem with much of the naysaying in past analyses of Boeing is that it simply doesn’t make sense for a company in a competitive market to make a product that kills people. (Except maybe tobacco.) It’s not a sustainable business model.

If people don’t trust aircraft, they don’t fly; airlines don’t sell tickets and don’t buy aircraft. If passengers didn’t care about safety, we’d all still be flying DeHavilland Comets, which had the unfortunate habit of coming apart in midair.

Boeing recently announced that it wants to replace some safety inspectors with machines, which will apparently allow machinists to check their own work. What could go wrong?  Self-driving cars are perfectly … no, wait.

The heart of the problem is what we might call hypercapitalism: The religion of the modern American corporation is that they can make higher profits every year. No matter what.

Of course, this is as absurd as it is dangerous.

There are really only two sources of economic growth: gains in population and gains in productivity. The former isn’t really a business strategy; the second is unpredictable.  Technology tends to advance and then plateau at a point where existing technology can be made no more efficient.

That has prompted firms in our time to cut wages and workers, squeezing out every drop of labor from those who remain. And now, if your job can be done by a robot, it probably will be.

Technology has made aircraft much, much safer, but more technology is not necessarily better. People helped by technology can be very productive and creative, even if they cost a little more.

Some progressives and others of the postmodern left will claim that the problem is the profit motive in general, but the numbers aren’t with them. During the Cold War, Soviet-run Aeroflot had more than 8,000 passenger fatalities, more than four times the runner-up (Air France, if you’re keeping score). Communism ended, and their numbers got a lot better.

Still, left entirely on their own, markets and the people who live by them tend to behave like unchaperoned teenagers at a beach party. The old Boeing used to play for the long game, building products with a shelf life that could be reinvented and improved and continue to make money.

New Boeing is parting itself out, sending out work to its far-flung empire to be conducted by people with less experience and who get paid less. Meanwhile, it has chased legions of experienced talent out the door through early retirements or sheer annoyance.

Boeing’s stock price has soared, but at what cost? Is continually cutting costs a sustainable model when customer safety is perhaps the most essential variable in your marketing equation? Boeing execs would no doubt bristle at the mere suggestion that they would cut corners on safety to save money, but human beings have a remarkable capacity to convince themselves of nearly anything.

Will this reach the level of compromising safety? Hard to say, but we shouldn’t want to have to test the theory. At the same time, it’s worth restating that the causes of the recent crashes are not known and that there’s no evidence that safety has been compromised.

Boeing will fix this problem, if only because there are still a lot of good people in Renton and elsewhere who understand that what they do affects people’s lives. But in the longer term, the company may have to make some choices about its direction and how it operates, choices that really shouldn’t be so difficult.

T.M. Sell is professor of political economy at Highline College.