On the Nisqually River, middle school students are studying a changing ecosystem and advising the grown-ups with power to address it. 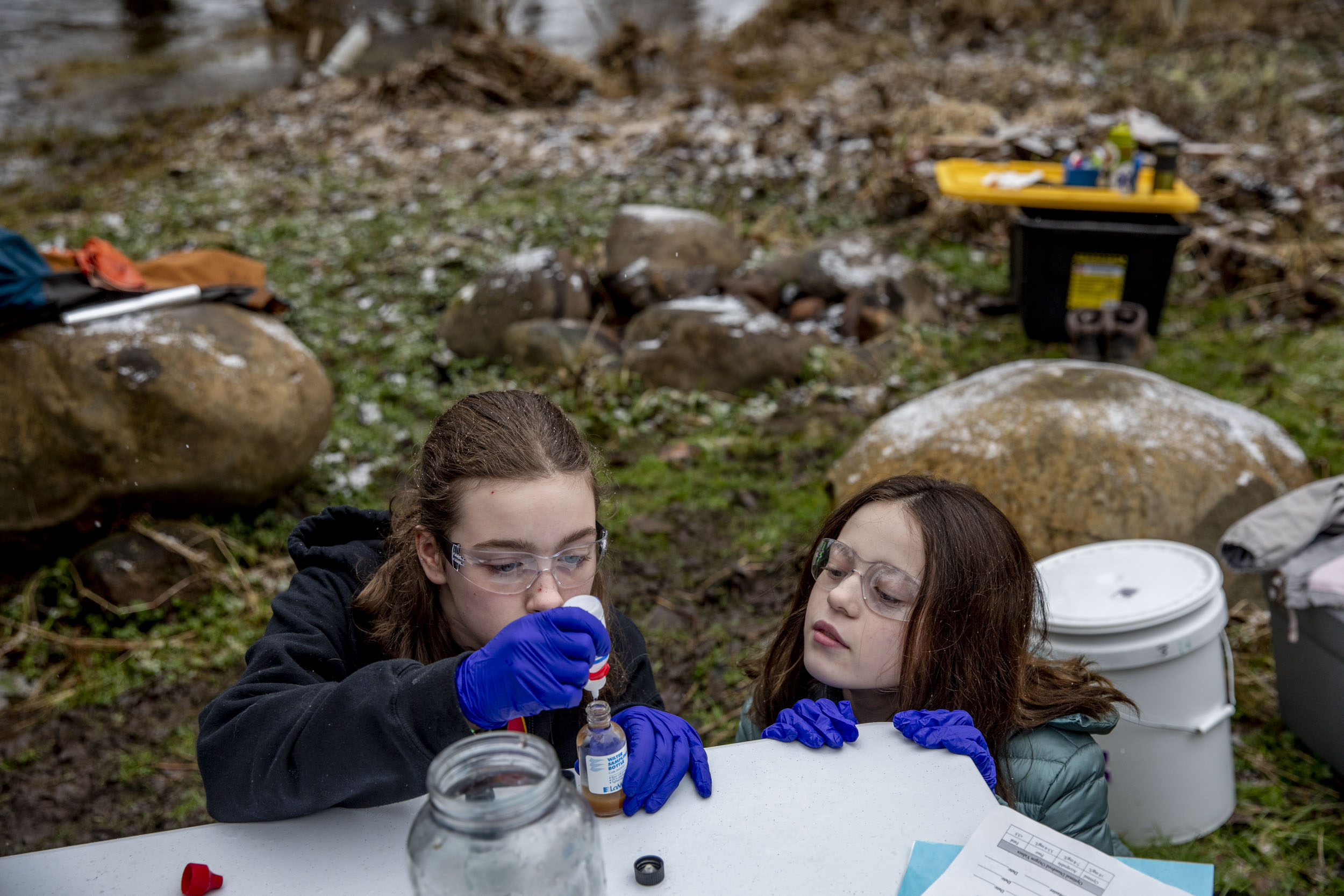 Sixth graders Taylor Drake, left, and Lexi Thompson test the water quality of Muck Creek, part of the Nisqually River Watershed in Graham, Washington, on Feb. 22, 2019. Cougar Mountain Middle School's science club, the Science Squad, spent the morning testing water quality with the Nisqually River Education Project. The project works with schools to monitor the water quality around the watershed by giving students hands-on experience and awareness about protecting the salmon habitat around them. (All photos by Dorothy Edwards/Crosscut)

Three scientists — Scarlett Turpin, Autumn Beasley and Lincoln Strubberg — are working on the banks and in the middle of Muck Creek, an offshoot of the Nisqually River near Graham, Washington. Snow flurries melt into the foot-deep water, and a dozen other colleagues bundled in coats, sweatshirts and nitrile gloves stand over plastic folding tables full of bottled chemicals.

Turpin eyeballs two cylinders full of creekwater. She’s evaluating turbidity — a measure of water cloudiness from suspended solids like dirt. By slowly adding small amounts of “turbid’ water to a control cylinder of clear water until it's as murky as the Muck Creek sample, she can pinpoint the value.

Beasley, meanwhile, takes the water temperature a few yards downstream. Strubberg already has a sense for how cold it is: Snowflakes stick to his eyelashes as he plops down to remove a rain boot and dump out a few cups of freezing creek water. 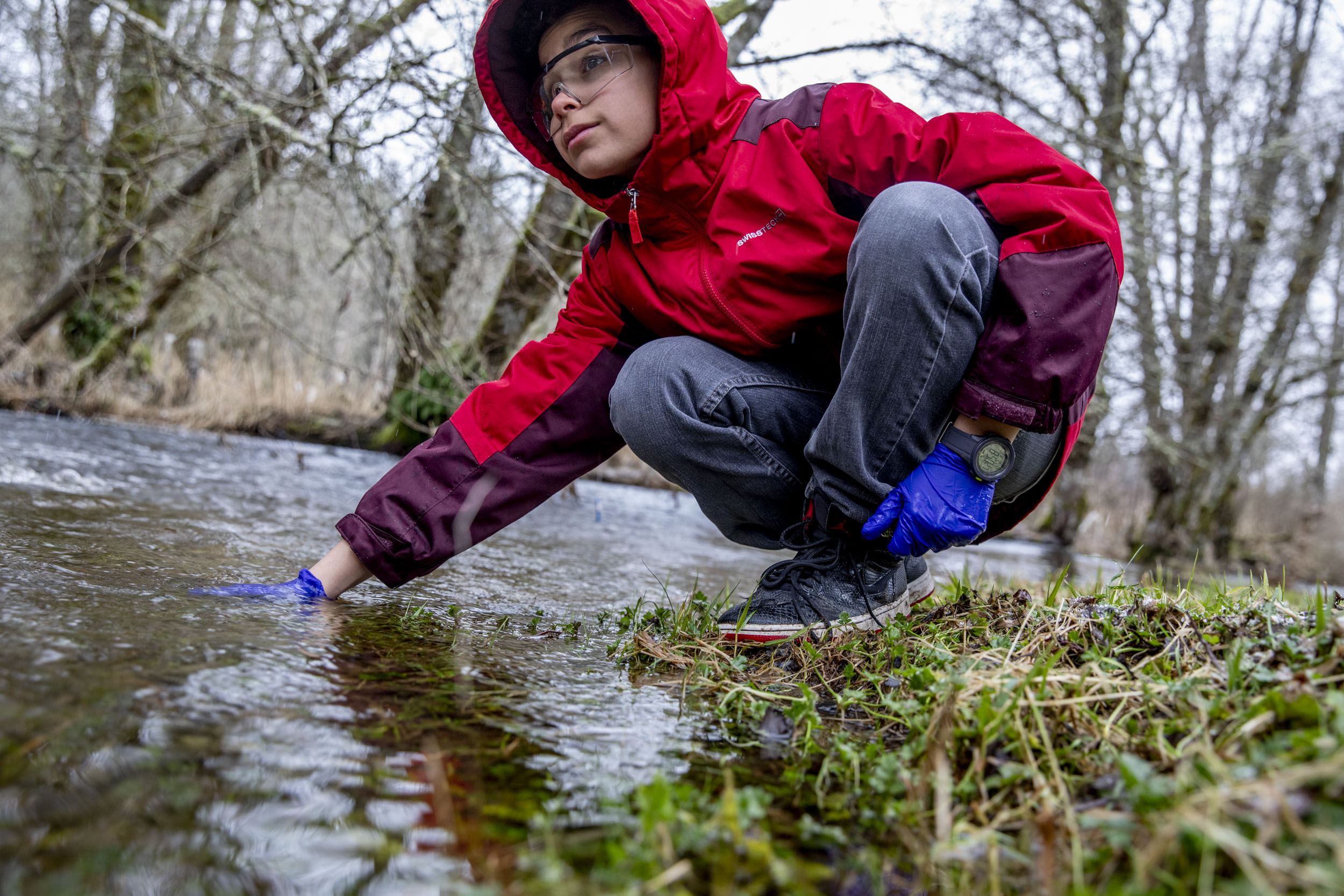 “It’d be 1.25,” Strubberg says, confirming a key finding. Turpin agrees. In a few weeks, these scientists will present their findings and recommendations on water quality improvements for the Nisqually watershed to hundreds of people attending a conference at Evergreen State College — even though none of them is old enough to drive.

Strubberg, Turpin and Beasley are all students at Cougar Mountain Middle School in Graham who are participating in the Nisqually River Environmental Project (NREP). Each year, NREP works with more than 50 teachers to send about 1,100 young scientists to locations across the Nisqually River Watershed for field research trips. On testing days, hundreds of students simultaneously test water at 28 designated sites — including Muck Creek, one of the watershed’s eight water bodies of concern.

“I like our kids being able to see what real citizen scientists can go out and do, which is something I can't provide for them on a daily basis in a classroom,” Williams says. “They like these experiments because they have real-world applications that are are actually used for something. This allows them to feel that they are making a difference and doing meaningful work.”

In March, Science Squad’s eighth graders will join hundreds of other NREP students at the Student Green Congress, where they will present their school’s data to peers and teachers from other schools and make anti-pollution recommendations to area regulatory agencies. In 2018, recommendations touched on everything from invasive species removal to pet waste disposal to sustainable construction.

One of NRC’s core goals includes conserving the Nisqually’s five native salmon species, whose plight radiates beyond the watershed to factor into broader challenges like orca whale recovery. Muck Creek is part of this work: The river is important for chum salmon, and climate change is creating stress on the steady streamflow they rely on during spawning seasons.

Student work follows salmon life cycles: They test water in the fall and plant trees, which cool streams and stabilize banks. They toss thawing salmon carcasses into creeks in the winter to replenish nutrients in the water. In spring, they perform another round of water quality testing to explore how the water quality changes seasonally.

“It’s not just that we're giving kids an opportunity to have an outside field trip, but that they're choosing to become stewards of the watershed and taking ownership of caring for this resource and being scientists, and checking the validity of their data, and going through the Green Congress process,” says NRC Program Coordinator Emily McCartan, who facilitates NREP programs along with Brandon Bywater, NRC’s Water Quality Program Coordinator. “Taking action so that students feel hope and ownership in facing environmental challenges is an important part of NREP’s approach, and salmon are the ‘poster species’ for how their actions help.”

“We have 30 years of data, and if something really weird shows up [during student testing], that does get fed into the public data system [accessible to NRC’s agency partners] so that scientists who are monitoring it can say, ‘Oh, we've got a problem up here,’ and they can do additional tests,” she says. 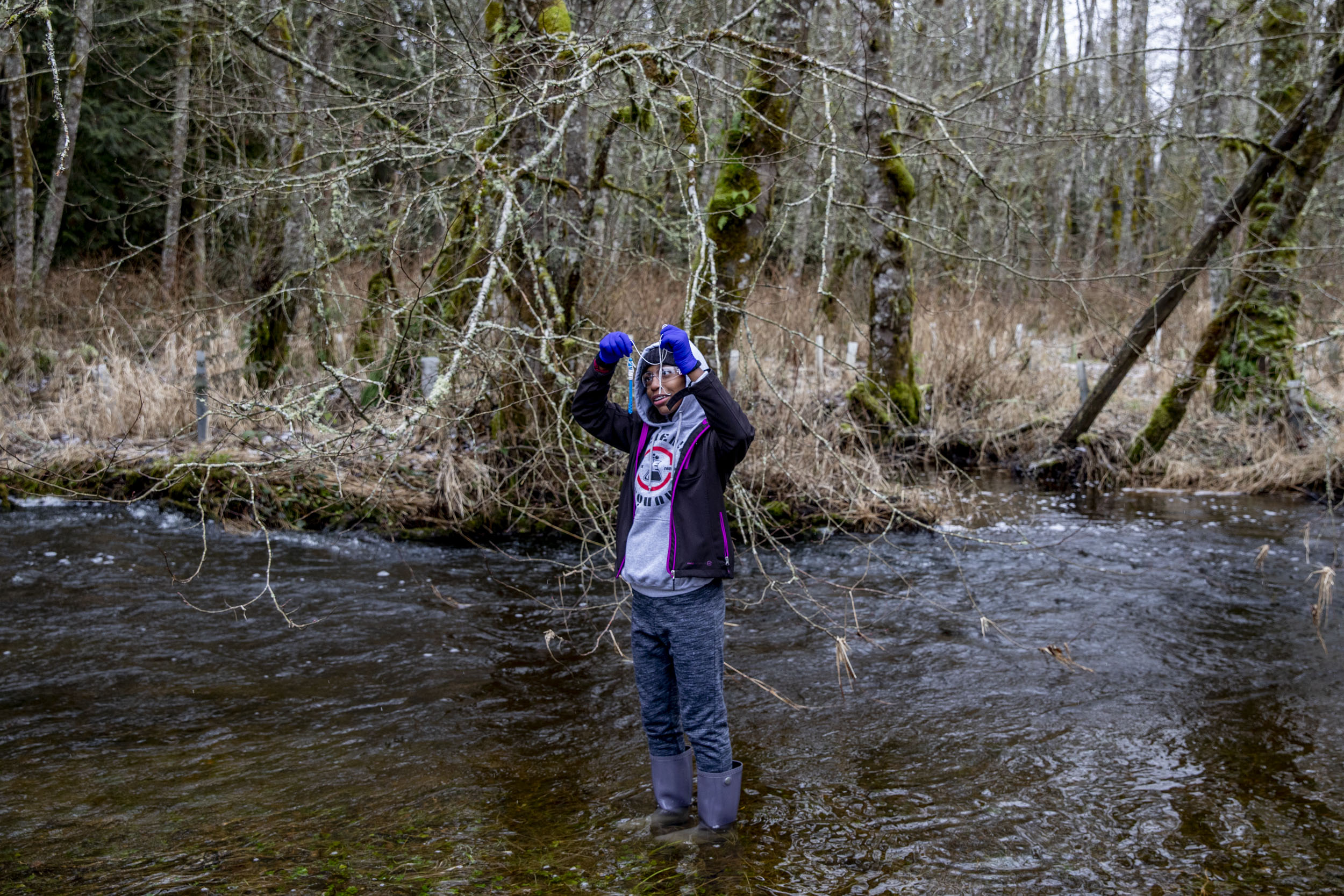 Students calculate dissolved oxygen concentration using the “azide modified Winkler method” of titration. In English: Students launch a volley of reactions that force dissolved oxygen to interact with chemicals of known quantities. The oxygen and chemicals trade electrons and form molecules until the students wind up with amounts of a new substance that’s not only more easily measurable, but that’s also proportional to the original oxygen in the sample.

Drake and Thompson crouch, watching their bottles at eye level and waiting for a reaction to finish dissolving dark flakes suspended in the solution. “It keeps going! Yours looks different than mine,” Drake says to Thompson. “Are you sure you added. …”

“I feel like I did something wrong,” Thompson says.

“You probably shook it more slowly than I did,” Drake says. She has a Project MC-Squared Ultimate Lab Kit at home, she says, and some experience with dry ice.

A few minutes later, the tables have turned. Drake's waiting for her solution to change as quickly as Thompson's. “Oh! It's separating! Yay!” Drake screams. “I'm proud of myself. I thought I did it wrong.”

“It reminds me kind of, of like a lava lamp... or a timer, if you turn it upside down and you've gotta wait for it all to fall,” Drake says.

“They're all so serious,” says parent volunteer Courtney DiRaddo-Jaeger, the mother of seventh grader Alexander. “I was listening to some of their conversations, and they weren’t just talking about YouTube, they were actually talking about the stuff that they were doing. I never had this at my school, and I wish I would have had something like this.” 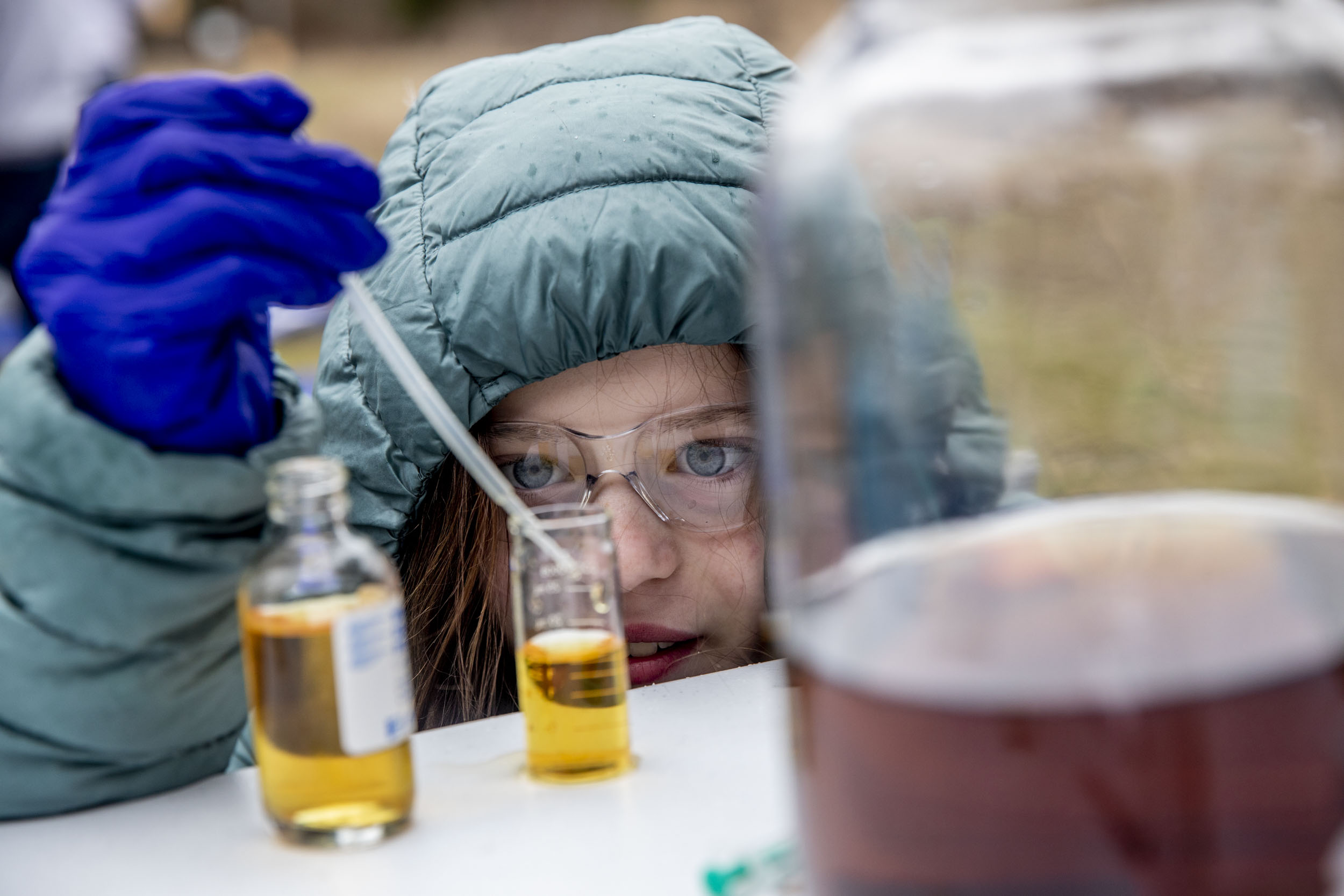 The dissolved oxygen measurements come in. Both testing locations are “survivable” for salmon, but Bywater explains why the shallow, rocky section of creek leads to better conditions for fish.

“When water's moving fast and it rolls over rocks and riffles, that's how it gets oxygenated — it's called aeration,” he says. "Where we were at, there's almost no rocks, it's really deep [...] so it totally makes sense that we'd have a lot less oxygen here.”

The turbidity team picks up rocks from the streambed and talks about the change in the river since their fall testing trip; it’s both higher and clearer.

“Before I joined Science Squad, I thought salmon were just something people and some animals ate — I didn't know that when they die they provide nutrients and they help the trees grow, then other plants grow, and animals eat that stuff, and it just goes and goes and keeps going,” Strubberg says. “It's interesting to me because it's a repetitive process. It's something that's hopefully always going to be the same.”

Scarlett explains why seeing science in action, figuring out how things happen, and helping the environment are things she really likes about the field trip. At that moment, two dogs from a nearby property run over, interrupting the junior scientists mid-experiment.

“You actually get to come out here and feel it, and like acknowledge how cool it is and not just hear it from your teacher's voice, or a book or something,” she says. “And — there’s a dog!”