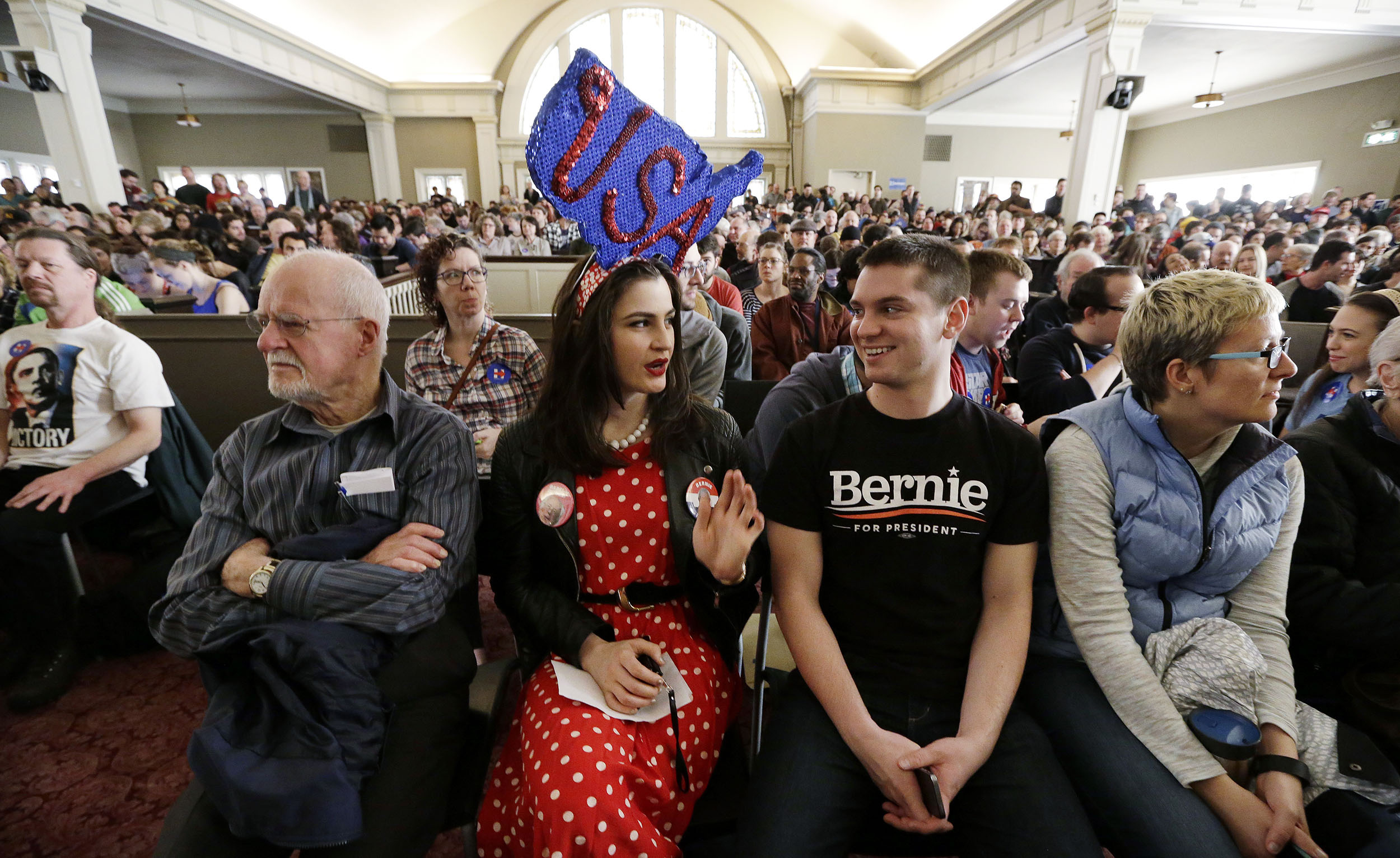 Mimi Ator, center, wears a homemade USA hat as she sits with other participants as they begin to organize a Democratic caucus on March 26, 2016, in Seattle. Democrats caucused statewide in support of either Hillary Clinton or Bernie Sanders during the 2016 primary election. (Photo by Elaine Thompson/AP)

For years, the Democratic Party in Washington state has used caucus meetings to award delegates to presidential candidates, while ignoring the results of the state's presidential primary. These caucus meetings generally consist of neighbors gathering for hours on a weekend in community locations, such as schools and libraries, to make their choice for president.

Now, the Legislature has approved moving the state’s presidential primary from May to March, a step many lawmakers hope will increase Washington's influence on the national presidential race. Yet the big question about the earlier primary remains: Will the state’s Democrats actually use it in 2020?

Historically, state Democratic officials have considered caucuses a valuable tool to engage voters and get them involved in party politics.

But after many Democrats complained of chaotic, drawn-out caucus meetings in 2016, state party officials are now considering a change. They want public input on whether they should start using the presidential primary to help decide the Democratic presidential nominee in 2020, or stick with the caucus system they have relied on for decades.

Pierce County Councilmember Derek Young, who chaired a legislative district caucus meeting in 2016, supports switching. He called the caucuses “inherently undemocratic.” Besides watching people with disabilities struggle in 2016, he said he watched “more than one mom with a kid in a stroller walk out."

“People were having to park over a mile away on dirt roads without sidewalks,” Young said. “I watched people who were in obvious discomfort and pain trying to sit in the caucus that lasted more than six hours, and they grew more frustrated.”

John Wyble, a Democratic political consultant, said he would also prefer that the party move to a primary election system for nominating candidates going forward.

“When we had the caucuses, we were asking people to take at least two hours out of a weekend and come and participate — and in some cases, that would turn into five hours, or six or seven,” Wyble said. “It limits the participation. …I don’t think any of that is actually good for democracy or good for the Democratic Party.”

The state Democratic Party's central committee will make the decision on April 7 during a meeting in Pasco. In the meantime, state Democratic leaders are asking people to submit their comments online through April 4.

Even so, more than three times as many Democrats voted in the May presidential primary as showed up for the March precinct caucuses. About 230,000 Democrats took part in the caucuses, compared with more than 800,000 who voted in the nonbinding Democratic primary election.

Todd Donovan, a professor of political science at Western Washington University, said lower-turnout caucuses usually attract highly motivated voters, but not necessarily ones that represent the views of the broader electorate.

“In states where it’s not going to be high turnout, I think you’re getting the party activists and people motivated by a certain political candidate — not necessarily the typical voter,” Donovan said.

The Washington State Republican Party, by contrast, has used the presidential primary to award delegates to presidential candidates multiple times before. While in some past years the state GOP has used both caucuses and a primary in its presidential nominating process, in 2016 the party switched to using solely the primary.

“Primaries have a much higher participation, so it’s easier for people to engage in the process,” said state Republican Party Chairman Caleb Heimlich, who said party officials intend to use the primary for allocating delegates again in 2020. “We think it’s a good way to get people involved and let their voices be heard in choosing the direction they want their nation to go."

Democratic Party officials are facing increasing pressure to go the same route. In supporting moving the presidential primary to March, politicians from both parties said they hope holding the election two months earlier will make the vote more meaningful, since it would occur before the parties’ nominating contests are likely to be decided.

In 2016, by the time Washington’s presidential primary took place May 24, Donald Trump was the only Republican candidate left in the race. Meanwhile, Clinton had already amassed a substantial lead over Sanders on the Democratic side, both in terms of unpledged delegates and superdelegates..

“My personal hope is that the parties jump into the primary system full force,” said state Sen. Reuven Carlyle, D-Seattle, who called the caucus meetings a “romantic relic of yesteryear.” He said holding an all-mail election with postage-paid ballots would ensure more people can participate.

Donovan, the WWU professor, agreed the earlier primary election date is likely to attract more presidential candidates to campaign in Washington state, one of the goals lawmakers cited in voting to move the primary from May to March.

Tina Podlodowski, who chairs the Washington State Democrats, recently declined to say whether she preferred the caucus system or supports switching to the primary to allocate delegates. She said that is up to the state party’s central committee to decide in April.

“There are a lot of ways that we can implement this,” Podlodowski said last week. “We’ll see what comes out of the plan.”

Three years ago, the state party issued guidance that took a firm position in support of using caucuses. “The Washington State Democrats believe that caucuses — meetings where voters sit down with their neighbors and discuss the various candidates prior to casting their votes — encourage greater participation and involvement than simply casting a ballot from one’s home,” the 2016 document said.

In passing the bill to move up Washington's presidential primary, the Legislature also approved other changes to ensure the primary election would align with Democratic National Committee rules. That includes letting the each of the political parties choose which candidates appear on their party’s primary ballot, instead of leaving that responsibility with Washington’s secretary of state. The plan now is to hold the earlier primary on March 10, 2020.

Democratic Gov. Jay Inslee, who recently announced he is running for president, could sign the changes into law as early as next week.

In an interview Thursday, Inslee said he doesn’t have any concerns about the proposal at this point.

He added he considers the date of the presidential primary “irrelevant” to his presidential campaign prospects.