Forget "Medicare for All," here's a model that doesn’t rely on government or insurance companies. 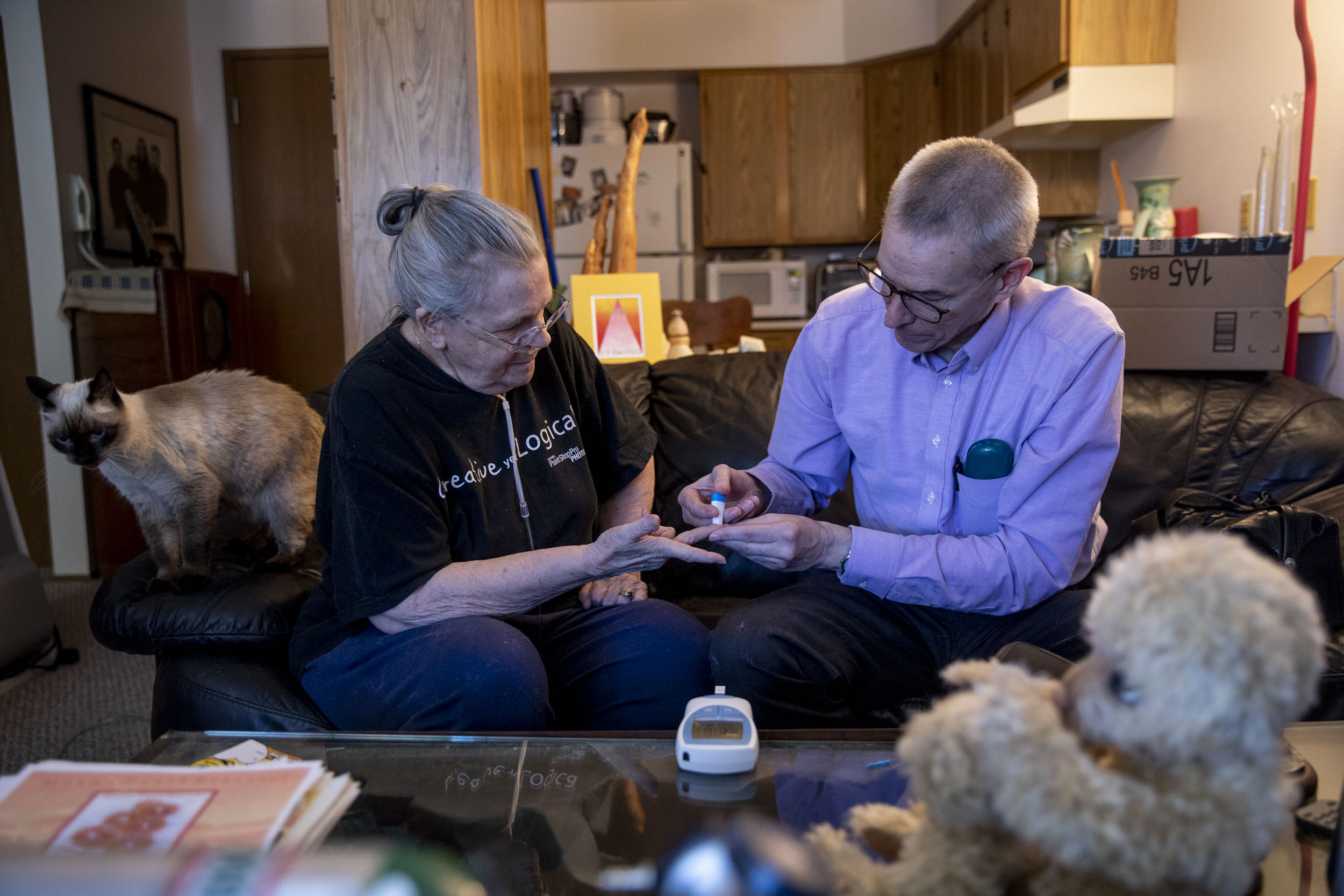 Dr. Peter Lehmann visits with patient Dina Krieg, 74, in her Poulsbo home on March 19, 2019. House calls are a norm for Lehmann's practice, Vintage Direct Primary Care. Direct Primary Care is an alternative model for primary care that eliminates fee-for-service and replaces it with a flat monthly fee which covers continual primary care. Lehmann estimates that there are about 1,000 doctors around the country practicing Direct Primary Care and says the doctor-patient relationship is what the majority of his patients value most. "People call me up and I know pretty much everything about them, and it makes it easier to take care of them," he says. (Photo by Dorothy Edwards/Crosscut)

In the stalemate over health care in America, both sides are wrong about themselves and right about each other.

U.S. Rep. Pramila Jayapal of Seattle and Sen. Bernie Sanders tell us that giant insurance companies have given us an inefficient, bureaucratic, incredibly expensive system that costs families more and more out of pocket every year. As that happens, more people and families fall between the cracks when they lose coverage or get hit with a debilitating injury or illness. For doctors it means having to treat more and more patients each day, leading to increasingly impersonal care. Profit-driven health care doesn’t work, they say. The cure: take profit out of the system by having the government provide health-care coverage, providing “Medicare for All.”

Their opponents counter that a takeover of health-care coverage by the government would require a massive increase in spending and taxes. The entire federal budget is $4 trillion. According to the Mercatus Center at George Mason University, the Sanders “Medicare for All” bill would cost about $3 trillion — $32 trillion over 10 years. If you double federal income and corporate taxes it still won’t cover the bill.

Medicare for All also would restrict payments to doctors, and probably lead to longer delays for nonemergency care as a cost-control mechanism. The Jayapal bill is similar to Sanders’ but would cost even more because it covers more services, including long-term care and dental. Not even Canada covers those things. Sanders sent out a tweet last week contrasting America’s system with Finland: “In the United States, it costs, on average, $12,000 to have a baby. In Finland, it costs $60. We’ve got to end the disgrace of our profit-driven health-care system and pass Medicare for All.”

Reality intrudes. The very week Jayapal introduced her bill and Sanders’ tweet went out, the Finnish government collapsed because its health-care system is no longer sustainable and Prime Minister Juha Sipila’s government was unable to pass necessary reforms to get costs under control as Finland’s population continues to age (like ours). Closer to home, Sanders’ home state of Vermont enacted “Medicare for All” in 2011, but by the end of 2014 it was in ruins and its champion, Gov. Peter Shumlin, tossed in the towel, citing the damage it was doing to “small businesses, working families, and the state’s economy.”

Both sides in this debate justify their position by vilifying the other side. Almost everything they say about each other is correct. So what do we do?

We try something entirely different, a model that doesn’t rely on government or insurance companies. It exists. It is called Direct Primary Care. Here’s how it works.

Our current system has either insurance companies or the government standing between the patient and the doctor as a “third party,” driving up costs, creating unnecessary and meddlesome paperwork and leading to impersonal care in the name of “efficiency.” The Direct Primary Care model gets insurance companies and government out of the way and restores the doctor-patient relationship.

At Vintage Direct Primary Care (“Modern Care. Old Time Service”) in Poulsbo, near Bainbridge Island, the customer pays a flat monthly fee, which slides with age. A family of four would pay about $140 a month. For that they can schedule appointments for visits (same day or one-day notice), and have the same menu of services that are covered at traditional health clinics, like Swedish or UW Physicians – from EKGs to Pap smears to stitches. One difference: Vintage does house calls for local residents and doesn’t charge extra. That is not a misprint.

With over 560 patients, medical director Dr. Peter Lehman, son of a physician and a doctor for more than 20 years, sees between six and eight of them a day, though last Thursday was busier than usual (“nine”). Most primary care doctors see over 20. Even though I interviewed him during the workday, the conversation stretched well over half an hour, which is about as long as he visits with a patient on average.  When I spoke with him last year on the radio, again during the workday, I noticed how remarkably free of stress his voice was.

Businesses have begun joining Vintage (about $50 a person), and some procedures are available for walk-ins (a sport physical costs $50). An important perk for patients: lab tests and prescription drugs are cheaper because they negotiate prices with suppliers free of any insurance entanglements and pass the savings on to their patients. Dr. Lehman says lab tests are sometimes 90 percent  less than what they cost a clinic shackled to an insurance template. Overall, Dr. Lehman estimates that Vintage Clinic covers about 80 percent of a customer’s annual health costs. Think of a world where 80 percent of health procedures happened outside the world of insurance or, in a single-payer world, government.

Do they take Medicare patients? Yes, it's about 30 percent of the practice, but they don’t accept Medicare as a source of payment.

What if a patient needs an operation? Well, that’s what insurance is for – to cover major, unanticipated expenses, which is the principle driving auto, life and home insurance. As Lehman notes, you don’t contact your auto insurance company to pay for an oil change, a new battery or tires. And if you did, they would all be dramatically more expensive.

A second Vintage office has now opened in Kingston, with about 450 patients. Though these clinics are more popular in the Midwest and East Coast, it was a Seattle physician, Dr. Garrison Bliss, who helped shape and build the popularity of Direct Primary Care, of which there are about half a dozen offices in the Seattle area. Dr. Bliss still practices in an office between Madison Park and Madrona.

This is how a nation starts to control the growth of health spending, patient by patient, by getting the middleman out of the way. Politically speaking, there are powerful interests barnacled to the insurance industry and political interests tied to growing the government that will resist this trend. Oddly enough, Direct Primary Care is appealing to people on both sides of the political spectrum. Liberals like less insurance industry dominance. Conservatives like less government and less bureaucracy. Both sides like the increased emphasis on putting the patient first.

Think about it. Does the insurance model, the government model or any hybrid in between provide 30- to 60-minute appointments and free house calls? If patient well-being is the top priority in health care, then this trend ought to be the future.