Before he died, a King County inmate pled for help — he didn’t get it

Attorneys representing the longtime partner of Derek Hutchinson are demanding an inquest. 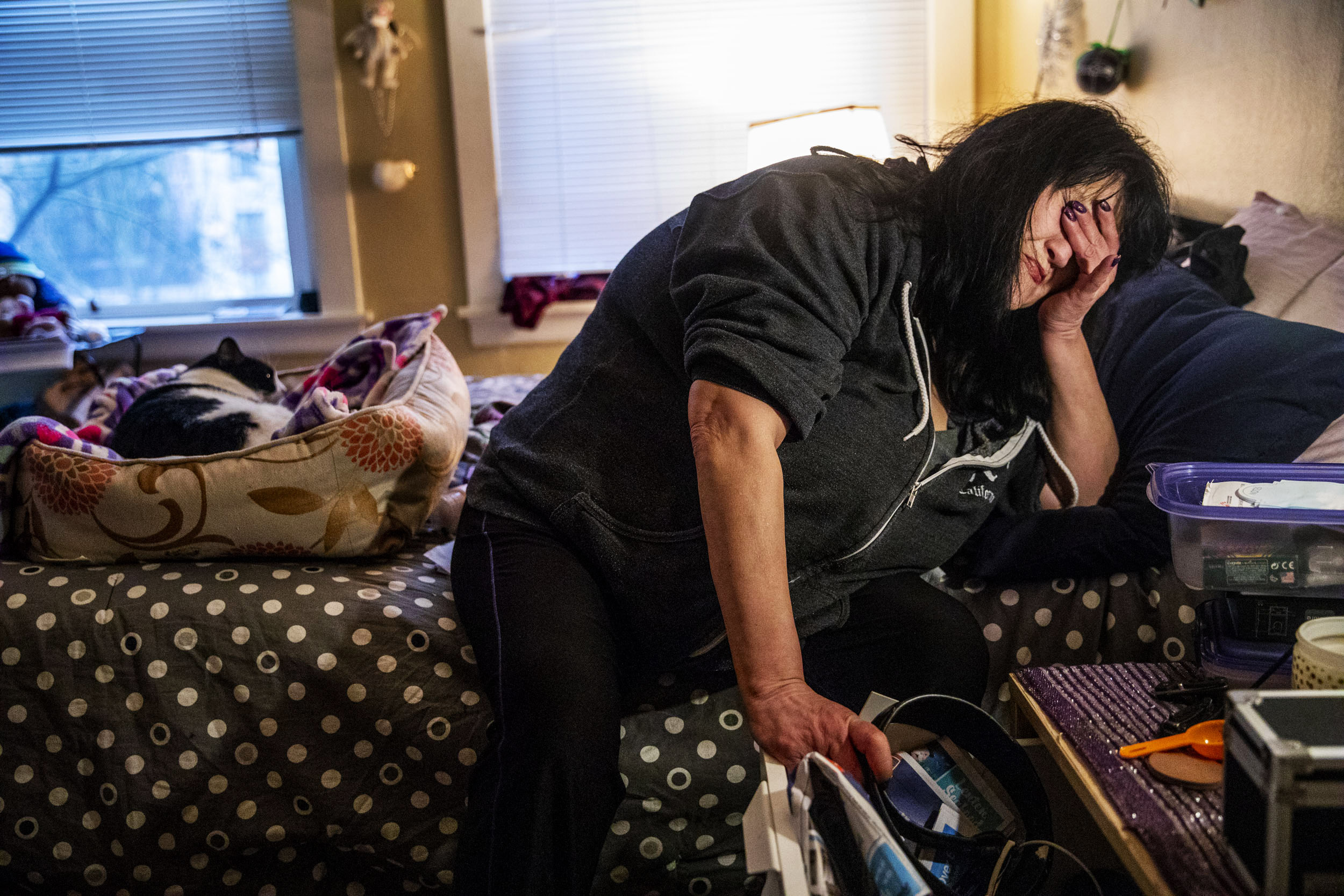 Jennifer McSherry becomes emotional as she goes through her partner's belongings in her Seattle apartment on March 6, 2019. McSherry lost her partner, Derek Hutchinson, in September 2017 while he was a King County inmate and complaints of pain went unanswered. She is working with lawyer Corey Guilmette to call for an inquest into his death. (Photo by Dorothy Edwards/Crosscut)

Derek Hutchinson first complained of not feeling well at 5:20 a.m., when the nurse on duty at the King County Regional Justice Center in Kent came to see him in his cell. Hutchinson was a heroin addict and, according to the handwritten notes cataloging the day, the nurse determined he was going through withdrawal and took no further action.

Hutchinson complained again at 8:15 a.m., approaching the jail’s staff station, where, according to the notes, he “demanded” to go to Harborview Medical Center. Rather than oblige, the officer on duty told Hutchinson he needed to fill out a “kite” — a written request for medical treatment.

Hutchison did not submit a request. Instead he doubled over and lay on the floor near the station. A nurse again looked him over and cleared him. According to an investigation from the Department of Adult and Juvenile Detention, staff then moved him to a lower tier cell at this time “because they were concerned he may try to create an opportunity for an injury when returning to his room on the upper tier in order to force [jail health staff] to send him to [Harborview Medical Center]. The move was made out of an abundance of caution to prevent any unnecessary hospital transports.”

Hutchinson remained in that cell for almost 12 hours. He refused dinner. In the evening he was joined by a cellmate, who said in an interview with lawyers recently that “he was really sick; he was groaning and rolling around.”

At 7:30 p.m. — more than 14 hours after he first complained — Hutchinson collapsed and began having a seizure. His cellmate remembers someone yelling. An officer approached the cell and asked Hutchinson if he needed a nurse, to which he replied, “Yes, thank you.”

By the time the nurse arrived, Hutchinson had stopped breathing. Staff began administering CPR and using a defibrillator before Hutchinson was cleared for transport to Valley Medical Center in Renton.

Hutchinson was officially declared dead at 5:34 a.m. Sept. 26, 2017. The cause cited was acute peritonitis following a perforated ulcer. In other words, the lining in his stomach had deteriorated, allowing bacteria into his abdominal cavity, essentially poisoning him.

A year and a half later, lawyers with the Public Defender Association are calling on King County Executive Dow Constantine to launch a fact-finding inquest into Hutchinson’s death. Corey Guilmette with the association said that because Hutchinson died under the supervision of law enforcement officials, the inquest should be mandatory, as it is when a police officer shoots someone.

The question they want answered: Why didn’t Hutchinson receive medical attention earlier, when he first complained?

“Our main focus now is trying to figure out what happened and what can be done to prevent that in the future,” said Guilmette.

At the same time, Hutchinson’s partner of 15 years, Jennifer McSherry, said she hasn’t ruled out a civil lawsuit. However, because they were not married, she might not have standing.

Hutchinson was 43 when he died. Like a large portion of the region’s prison population, he was homeless and addicted to drugs. McSherry, 53, said the two of them spent most of their time in and around Queen Anne, where they got to know the people who lived in the neighborhood and who worked in the stores. They didn’t have permanent shelter but they had each other and had built a life over the nearly two decades they were together.

“It’s hard to find somebody who will stay with you out here and go through everything we went through,” McSherry said, struggling to speak at times through tears while in the Pioneer Square office of the Public Defender Association. “Derek had the patience of an angel. … If you saw one of us, the other wasn’t far behind.”

The portrait McSherry paints of Hutchinson is of a man with a deep sense of humor and an endless willingness to help. He would walk through Seattle Center sometimes, picking up used hypodermic needles because he knew how to handle them. “You never had to ask Derek twice,” she said.

When they wanted to embarrass each other, they’d use each other’s pet names in public — McSherry was “poopy”; Hutchinson was “Hutchy-bear.”

He struggled at times, of course, mostly with his addiction. Both of them spent enough time in jail that they knew the officers by name and the officers knew them as a couple.

But they were moving in the right direction, McSherry said. Hutchinson was close to starting methadone (“He was done”) and they’d taken shelter in the city’s Navigation Center after more than six years on the street. He wanted to go to school, she said.

The past followed Hutchison, though, and one night a police officer saw him and another man in the Chinatown-International District, crouching under the Interstate 5 overpass to use heroin. When the officer ran his name, a warrant came up — Hutchinson had failed to follow the conditions of a past felony conviction.

When he was booked into jail, Hutchinson disclosed that he had a long-festering hernia, but that it hadn’t bothered him recently. He didn’t have much on him — a cellphone, earbuds, his hat.

McSherry said they both knew what to expect when going to prison. Part of his time there would be spent detoxing. It’s an unpleasant experience, sometimes violently so, but she said Hutchinson had never asked for medical help in prison before — and he definitely wasn’t the type to fake it.

“If you look through his 15, almost 20 years of jail history, there’s never any allegation of him faking,” said Guilmette. “In fact, quite the opposite. He sometimes was turning down medical services. … When he sought services, it was for something quite serious, like an open abscess.”

If staff had looked at his history after he complained, said McSherry, “they would have said, ‘Oh, my God, this guy’s really sick.’”

The post-death investigations carried out by the Kent Police Department and DAJD, concluded in January 2018, detail the events following Hutchinson’s second collapse, but there is only scant detail of the preceding morning. There also are few clues beyond the handwritten notes of why Hutchinson did not receive earlier treatment.

Capt. Dave Weirich with DAJD declined to answer questions related to the scope of the investigation, and James Apa of the Department of Public Health — which provides care in the correctional facility — said federal privacy laws prevented him from discussing what care Hutchinson was provided. A spokesperson for the Kent Police Department did not return a call for comment.

Guilmette believes an inquest — in which a jury establishes a set of facts about a case, but does not issue a verdict — would shed more light on why certain actions were or were not taken. The process has been delayed as the county revamped its inquest hearings, expanding their scope to address not just what happened in a law-enforcement related death, but why.

If it turned out there was a policy violation, Guilmette said, there should be accountability. But because the new inquest process allows for a more critical evaluation of what led to a person’s death, Guilmette is optimistic that, even if no policies were violated, it could lead to a re-examination of policies surrounding providing medical care and detox in jail.

“When you have a policy of being expected to go through detox in jail without medication-assisted treatment … you have the potential where symptoms that are serious are let go because that’s just what happens,” he said. “That obviously creates a risk that symptoms that are fatal can be overlooked.”

A spokesperson for County Executive Constantine said the case is being reviewed to determine whether an inquest should be convened.

It’s unclear what earlier intervention would have meant for Hutchinson, but it’s possible emergency surgery could have saved his life. In a meeting with attorneys with the Public Defender Association, a University of Washington doctor said she would have been concerned enough about his hernia to take a closer look at complaints of abdominal pain. She also would have looked to his past reactions while going through withdrawal and only would have dismissed symptoms if he had a long documented history of exaggeration or faking. 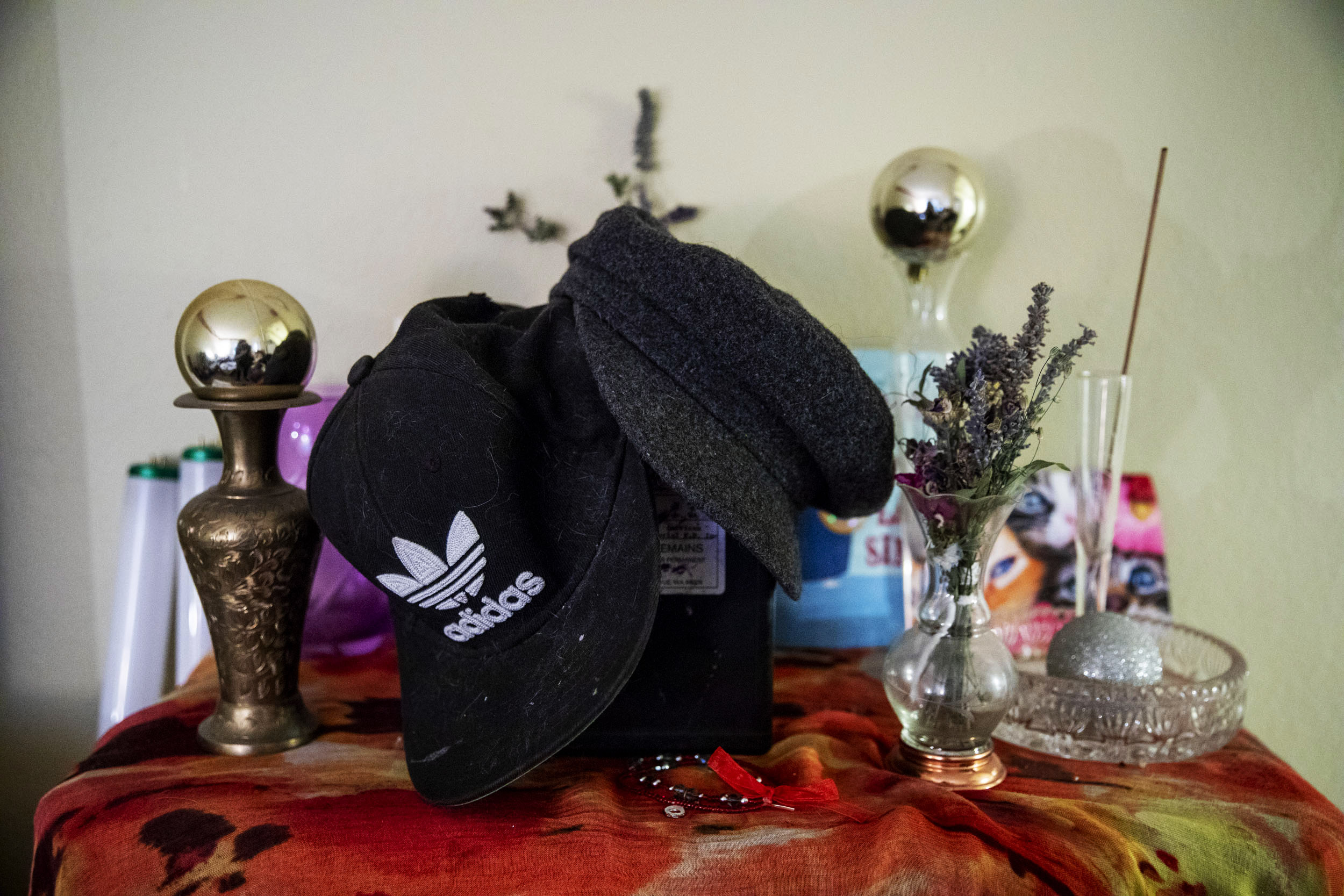 Hats that belonged to Jennifer McSherry's partner Derek Hutchinson in her Seattle apartment on March 6, 2019. They were together for 15 years. (Photo by Dorothy Edwards/Crosscut)

Hats that belonged to Jennifer McSherry's partner Derek Hutchinson in her Seattle apartment on March 6, 2019. They were together for 15 years. (Photo by Dorothy Edwards/Crosscut)

There have been issues with unresponsive jail staff in the past. In 2007, The Seattle Times published an investigation into instances when inmates had not received proper medical care. That same year, the King County Correctional Facility (KCCF) was placed under Department of Justice monitoring. In 2014, KCCF lost accreditation from the National Commission on Correctional Health Care.

And in 2016, an inmate settled with the county for $1 million after a spinal cord injury was left untreated for 10 days.

In an email, Apa said, "Our jail health staff works to provide the highest quality care to 35,000 patients in custody every year, many with highly complicated health circumstances. We hold ourselves to the highest standards of care for our patients and have strong policies in place to guide our work. We review cases and practices regularly, and continually improve how we provide care for this complex population of patients."

He also noted that the correctional facility was reaccredited in 2018.

Although he could not speak to Hutchinson’s care, Apa did provide Crosscut with policies related to inmate treatment. Incarcerated people have a constitutional right to health care. If inmates believe they are not receiving that care, they can file a grievance, although that would not have likely helped Hutchinson.

When it comes to withdrawal, medical staff will not compel treatment for mild symptoms. But the policy says staff should manage withdrawal symptoms to avoid self-harm, dehydration, electrolyte imbalance and, most relevant to Hutchinson, “complications related to other serious illnesses.”

For McSherry, the year and a half since Hutchinson died has been awful. She is now living in an apartment on First Hill, which is paid for through a local rapid rehousing program. Their cat, Bella, roams the apartment, settling sometimes on a pair of Hutchinson’s pants McSherry has kept.

It would be perfect, but for Derek’s death. This should be their apartment, she said, where they could turn the corner away from their years struggling on the streets. “I don’t want to be without him,” she said. “I shouldn’t have to be. Why wasn’t the doctor called?”