With ‘Skeleton Flower,’ Degenerate Art Ensemble puts on its most personal performance yet.

In a vivid blue house on a steep hill in Fremont, monsters are mingling with fairy tale figures. Felted green dragon tails snake across the home studio, where woven baskets burst with madly patterned fabrics. Curtain rods are festooned with diaphanous garments, a gold-leafed leather coat, a black-white-and-red feathered jumpsuit. Mannequin heads sport teetering hats in curious shapes. And seated facing each other, two women insert stiff wires into the underskirt of a dress made from 10,000 silk flowers.

All of these costumes have been painstakingly handcrafted for Skeleton Flower, the world premiere production by Seattle performance art group Degenerate Art Ensemble (DAE). The title of the piece is taken from a flower (Diphylleia grayi) whose white petals turn transparent in the rain — a neat magic trick and an apt metaphor for the show.

Founded by Crow Nishimura and Joshua Kohl some 20 years ago, DAE is known for concocting fairy-tale-flavored fictions featuring a cacophony of musicians, dancers and costumed creatures. But this time the scale is intimate, and the source material is personal.

Skeleton Flower (March 13-17 at Erickson Theatre) chronicles the story of Nishimura’s abusive childhood, and how she rose above it by embracing her creativity. The tale unfolds through live music, dance (Nishimura is trained in Butoh), video projections and the rich pageant of costumes that crystallize the tale of a young girl on a perilous journey of transformation.

Five days before opening night, members of the costume collaboration team have joined Nishimura at the house to unpack, fluff up and make final adjustments to the costumes. (In an adjacent room, Kohl is bent over a computer, managing the tedious task of switching tickets; the original premiere was rescheduled due to snow.) The vibe is one of eager anticipation — these pieces have waited a long time for their stage debut. 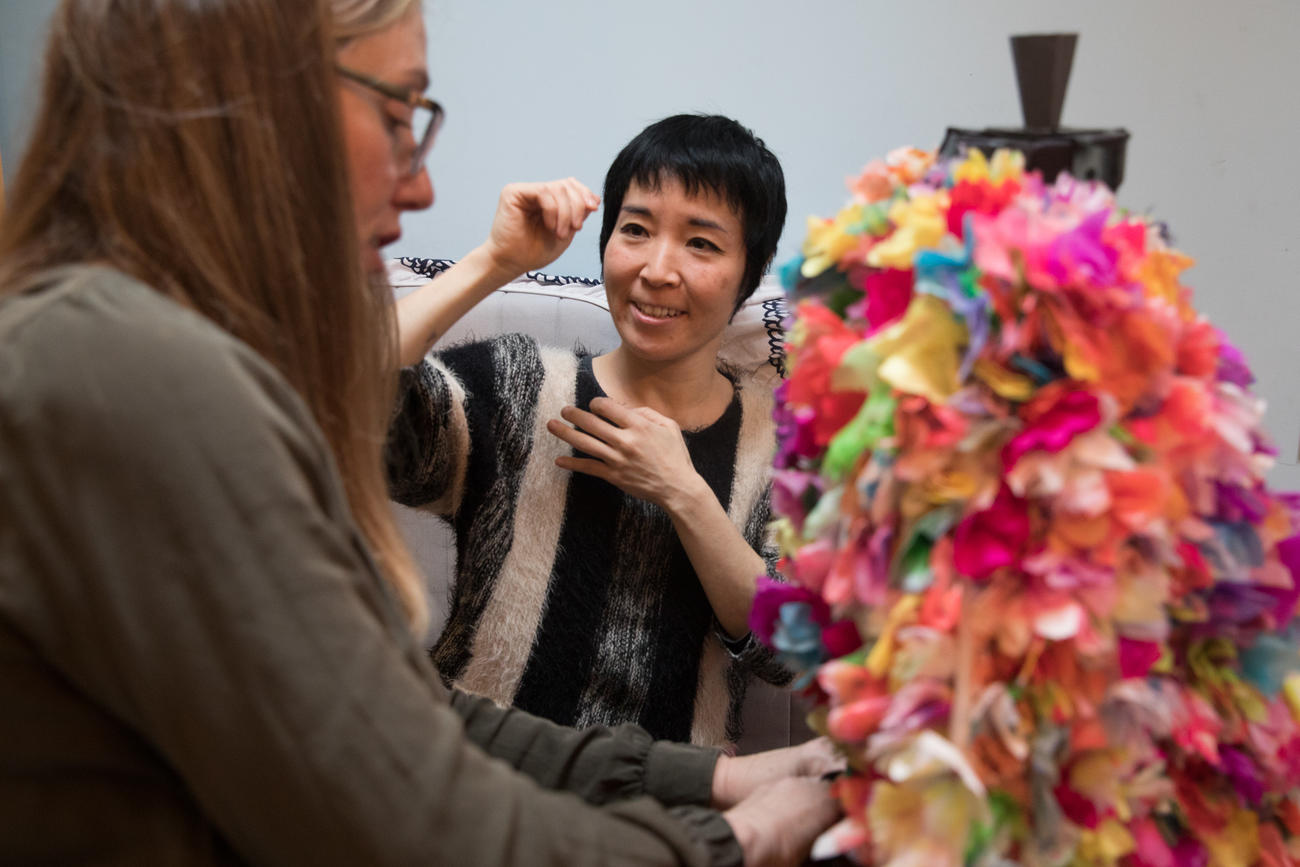 Textile artist and costume collaborator Wyly Astley, left, works with DAE’s Crow Nishimura to display the dress made of some 10,000 flowers.

Textile artist and costume collaborator Wyly Astley, left, works with DAE’s Crow Nishimura to display the dress made of some 10,000 flowers. 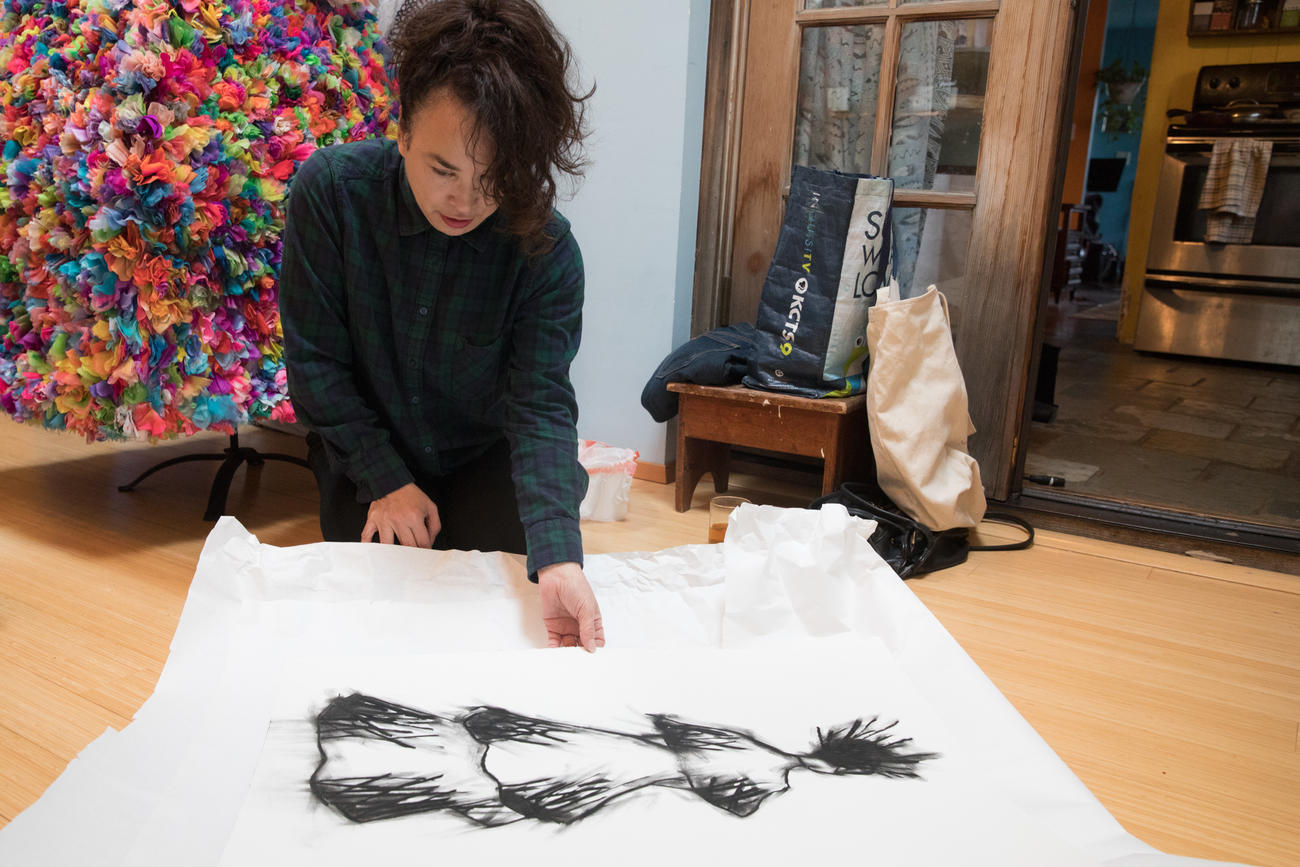 Set and costume designer Elizabeth Jameson shows her charcoal sketches for one of the fairy tale costumes in ‘Skeleton Flower,’ a dress worn by a princess who must sew shirts made of nettles to set her brothers free from a curse.

Set and costume designer Elizabeth Jameson shows her charcoal sketches for one of the fairy tale costumes in ‘Skeleton Flower,’ a dress worn by a princess who must sew shirts made of nettles to set her brothers free from a curse. 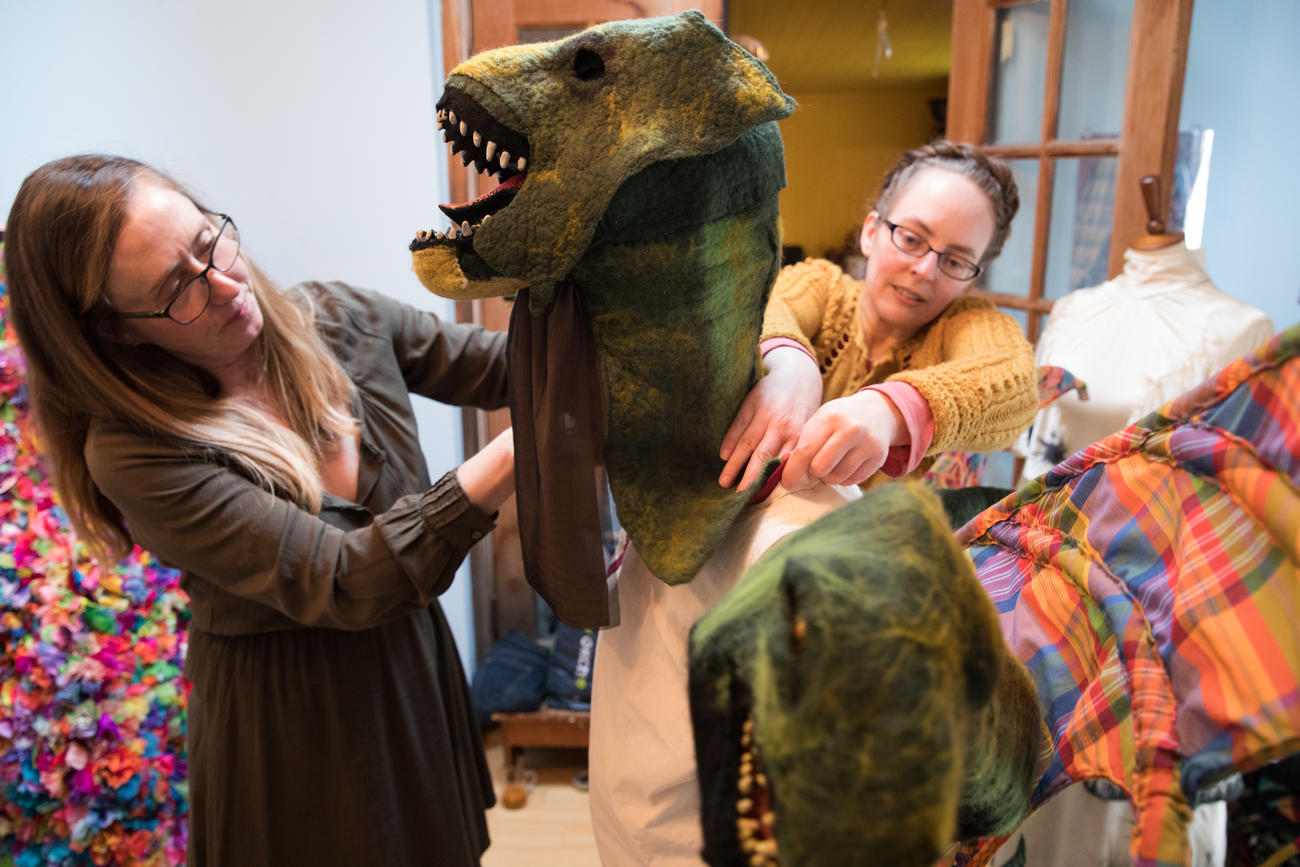 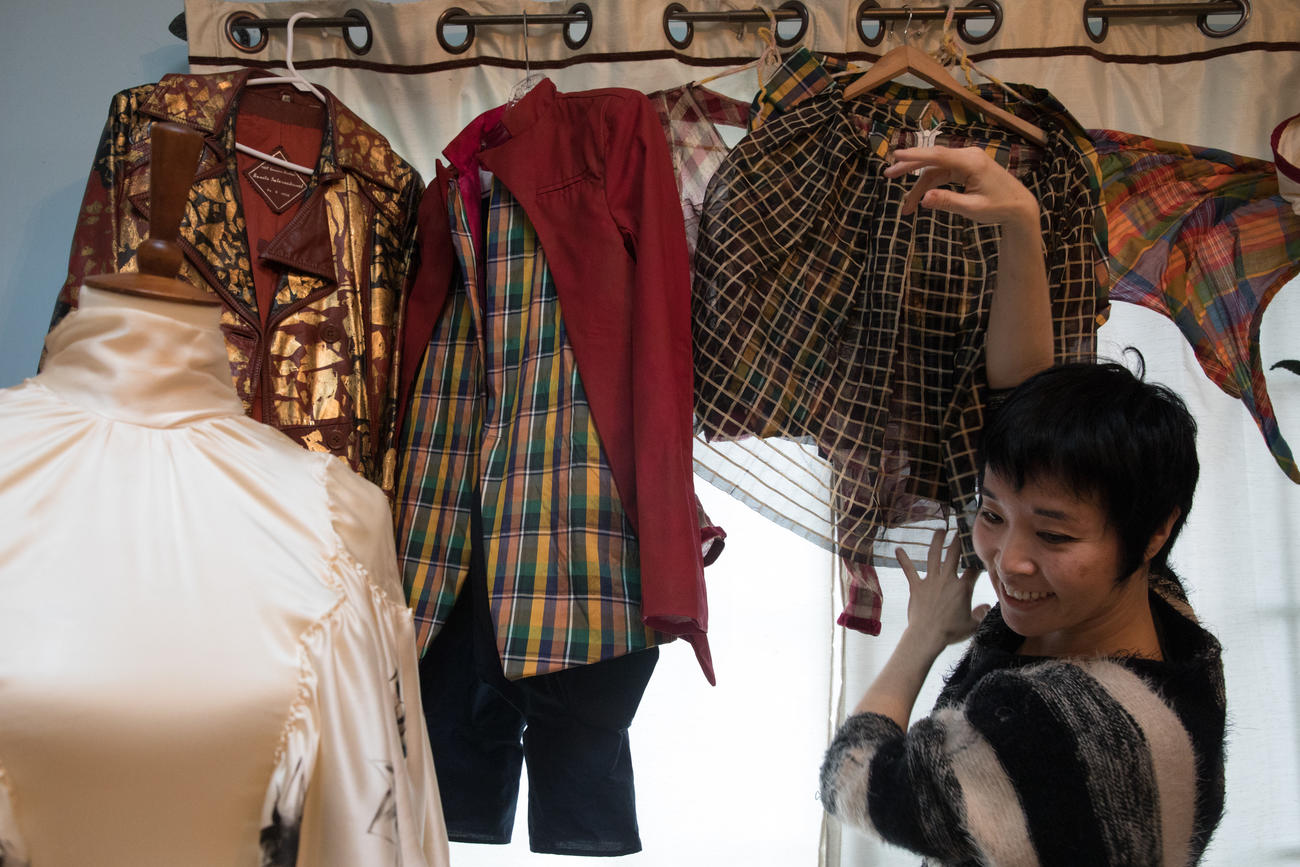 Nishimura shows how origami folding techniques and translucent fabrics are used in the ‘Skeleton Flower’ costumes.

Nishimura shows how origami folding techniques and translucent fabrics are used in the ‘Skeleton Flower’ costumes. 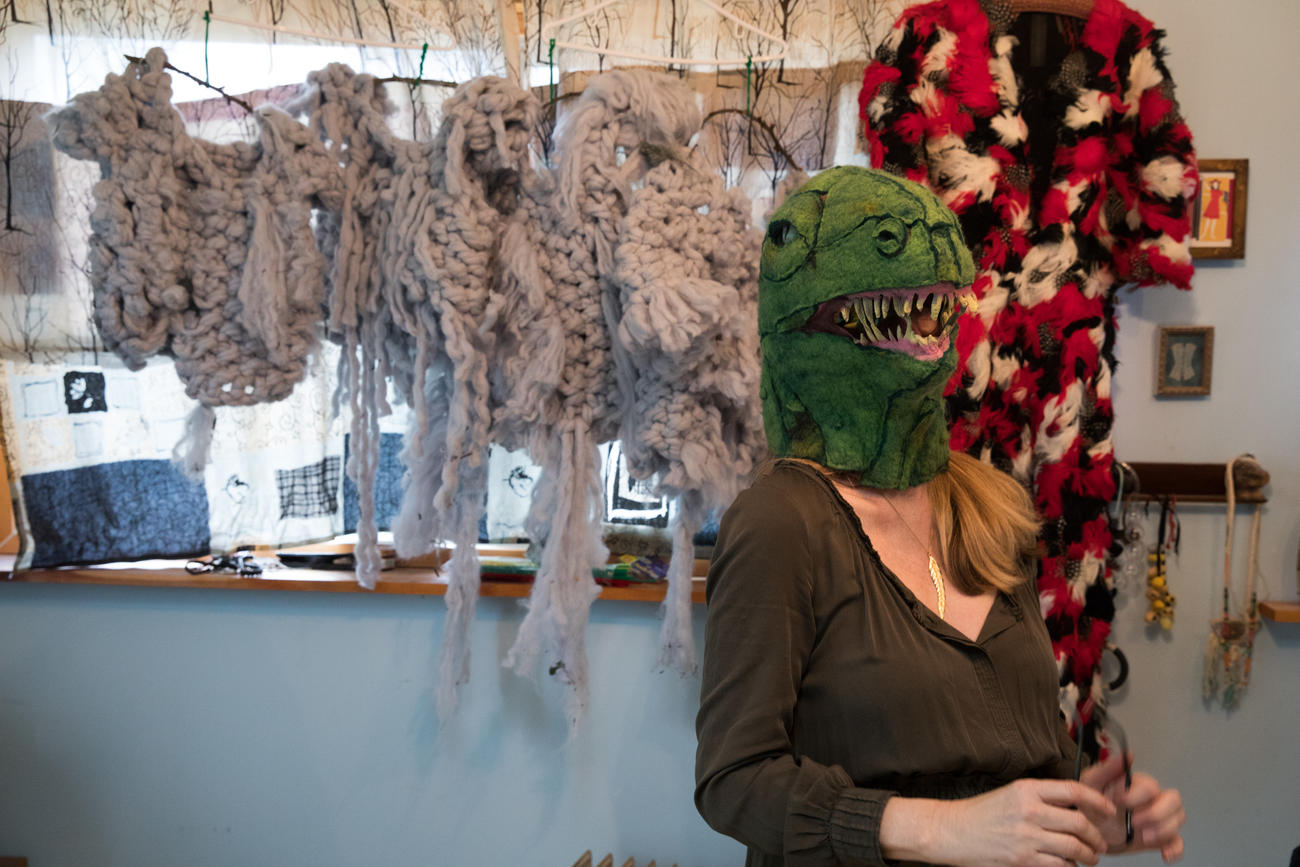 Astley tries on the Godzilla mask in front of several fairy tale elements: the knit nettle shirts from ‘Wild Swans’ and the hand-feathered jumpsuit from ‘Fitcher’s Bird.’

Astley tries on the Godzilla mask in front of several fairy tale elements: the knit nettle shirts from ‘Wild Swans’ and the hand-feathered jumpsuit from ‘Fitcher’s Bird.’

Nishimura’s painful backstory is portrayed by way of a family of “kaijin,” Japanese pop-culture monsters or mutants. “I grew up on these TV shows,” says Nishimura, who was born in Japan and raised in the Pacific Northwest. In her characterization, Godzilla is her father, Mothra is her mother and Ghidorah, the three-headed dragon, is her brother.

In the next room, Nishimura dons the Brother-Ghidorah costume and has some trouble fitting the wings through the door. She laughs and thumps her way in, dragon heads covering her hands and arms like opera gloves. “It was a challenge figuring out how to transform a woman’s body into an adolescent boy dragon,” notes costume builder Willow Fox.

“We ended up removing some of the costume’s interior structure halfway through filming because it was so hot,” Fox adds. “But that fit the storyline. He becomes more defeated, and smaller.” Nishimura confirms the assessment of her sibling stand-in. “He is under the table, terrified,” she says.

Hanging high on the wall, the Father-Godzilla costume looms, green claws poking out of a beige sportcoat.

“It’s a very intense piece,” says textile artist Wyly Astley, who did the wool felting for Ghidorah and Godzilla. “The monsters really speak to being a child living with abuse,” she says. “It’s like a cartoon, but it’s horrible. It wrecks you to see this kid coming out of this situation.” She touches Godzilla’s rubber teeth with her fingers.

Nishimura now models the Mother-Mothra costume. It features a blousy peasant top with a quilted overlay, long wide skirt and a set of fake arms so the wearer appears to have four. “I used lace doilies to give the feeling of Mother Mothra,” Fox says. “The details refer to the traditional role of women, and how women raise young girls to fulfill those roles. ‘Be supportive.’ ‘Don’t ask for help.’ Things we’re trying to evolve out of.”

Swaying her wings slightly in the costume version of her mother, Nishimura explains that her parents wed very young, by arranged marriage. “They were just kids; they didn’t know what they were doing,” she says. “My mother was full of juxtapositions. She was abusive, but she also read me fairy tales — and look what I’m doing with them now.”

Throughout Skeleton Flower, Nishimura’s personal story is interwoven with her interpretations of classic fairy tales about young women forced to rely on their creativity to survive.

“When I was growing up, [my mother] was against me having a creative life — out of protection for me,” she says. “But ironically, mine is a journey I think my mother wanted to have as a creative person. Now I think she’d be proud to see me.”

Included in the narrative mix is a retelling of “Fitcher’s Bird,” a Grimm’s fairy tale about a sister who rescues her siblings from a sorcerer by disguising herself in honey and feathers (represented by Nishimura’s exquisitely feathered jumpsuit). Also: Hans Christian Andersen’s “Wild Swans,” in which 11 brothers are cursed to live as birds. “To return her brothers to human form,” Nishimura says, “the princess is forced to knit 11 shirts out of stinging nettles — without speaking a word.” This explains the loosely crocheted gray sweaters hanging on twigs in the studio.

Fox relishes the connection between the tasks women are often beset with in fairy tales and the creation of the Skeleton Flower costumes. “I really like that we are creating a story of transformation and survival through the ritual of traditional women’s work,” she says. “Stitching, weaving, making.”

The costume that required the most makers (40 people) is the dress of silk flowers, which signifies transcendence. It’s a stunning piece, vibrantly multicolored and featuring a skirt that pops out like a cube-shaped tent. “This was a labor of love,” says Astley. “Everyone had their hands on this one.” Each one of the flowers is made of hand-cut silk, painted individually and hand-stitched.

“I call it the monster dress,” says Elizabeth Jameson, a visual artist who worked on costume and set design for Skeleton Flower. “When I first came to Crow’s house, she said, ‘I want to be totally covered in flowers.’” Jameson sketched out a plan she thought would require 700 to 800 flowers. But when volunteers started sewing them onto the form, they placed them much closer together than she had intended. The dress is now covered in approximately 10,000 flowers. “But that’s the beauty of collaboration,” Jameson says. “The dense wall of flowers works better.”

Nishimura agrees. “This is a shaman,” she says. “The wall of flowers is to protect her from bad energy.” She delights in how many volunteers took sections home to complete as homework. “A whole community built this dress,” she says. “It really has the spirit of creativity sewn into it. That’s perfect.”

Like something out of a fairy tale, the artist has turned herself into a bird. Nishimura, whose given name is Haruko, now chooses to go by Crow. “Renaming is a part of the process of consciously becoming my own person, moving on from my past, owning my own future,” she says. Her reason for picking Crow is clear: “Crows are mischievous, they use tools to figure things out, they are loyal in their tribe and they are survivors.”