An upgrade to the fire department at the Yakima Training Center is on the list of military projects that might be put on hold by the president’s emergency declaration. 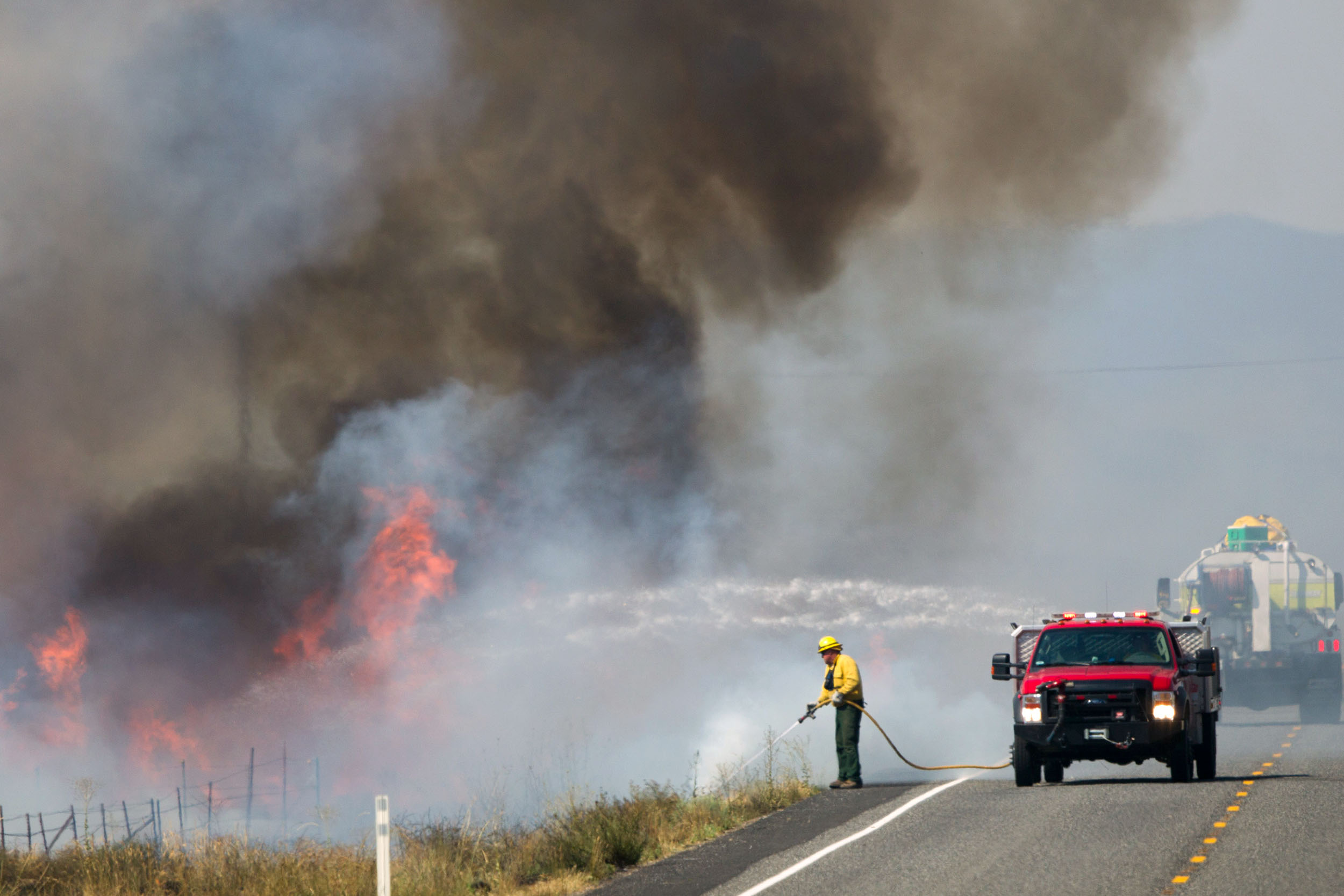 Firefighters work to contain a brushfire off of State Route 24 near Moxee, Washington, Aug. 1, 2016. The brushfire started on Yakima Training Center land. (Photo by Sofia Jaramillo/Yakima Herald-Republic via AP)

It is known as “Yakistan” among soldiers who train there. A vast tract of land the Army first began using in the 1940s for live-fire training and artillery practice, the Yakima Training Center is currently used nearly year-round by both active-duty troops and National Guardsmen, as well as visiting Japanese troops, various law enforcement agencies and occasionally the Canadian military.

It is rough and rugged terrain, covered with sagebrush, bitterbrush, and bunch grass, making the Central Washington locale an ideal place to prepare for combat in southern Afghanistan and elsewhere in the Middle East. Those features also make it ideal for wildfires — especially when live munitions enter the picture.

“They’re in an area that’s a big grassy plain that’s pretty dry during the summer,” explains Joe Smillie, a spokesperson for the Washington State Department of Natural Resources. “Part of the problem, too, is that it’s in kind of a wind corridor so a lot of times they’ll pick up and it’s not uncommon to see 10-, 20-, 30-acre fires.”

Those wildfires keep the Yakima Training Center’s fire department busy, responding to an estimated 300 fire starts each year, according to military officials. Yet the set-up of the department itself is not ideal, currently consisting of three separate wooden structures that split up the administrative, motor pool and storage resources. It is also lightly equipped in terms of actual firefighting assets.

“The one we have was considered a temporary facility now looking to be upgraded to a Department of Defense standard fire department,” said Lt. Col. Roger Gavriluk, the commander of the Yakima Training Center. “That’s what’s on the chopping block.”

Gavriluk was referring to reports last week that the fire department upgrade would be one of several Pentagon projects to be nixed to free up funds to build a wall along the U.S.-Mexico border.

The news, prompted by President Trump’s recent emergency declaration to fund his border security plan, comes after the Army had budgeted $19 million for a fully equipped facility.

Plans for the new facility consist of a single brick-and-mortar structure that would consolidate all firefighting operations under one roof, which Gavriluk says would greatly simplify logistics and allow for significantly quicker response times. Gavriluk also told Crosscut that the department is also trying to acquire new brush trucks — off-road firefighting vehicles ideally suited to Yakima's rugged terrain — to add to its current fleet of vehicles, but that without the new facility they wouldn't be able to properly store them. As it stands, he noted, several vehicles currently rest in separate lots.

The project stalled after the lowest bid came in $3.5 million above budget, Gavriluk said. While the initial $19 million had already been appropriated, the contract couldn’t be awarded without the rest.

“That has been the limitation here,” Gavriluk explains. “It’s up at USACE — the United States Army Corps of Engineers — awaiting a Department of Defense adjudication on who’s going to pay for it and where that $3.5 million was going to come from.”

In accordance with the president’s emergency declaration, the Department of Defense is exploring cuts to several projects across the country that were to receive discretionary funding. The Pentagon recently presented Congress with a 20-page list of programs that could face cuts.

In all, four Washington state projects made the list. Two of them are at the Yakima Training Center, which is also slated to lose a new tactical equipment maintenance facility.

“Out of the two, the one that’s most worrying and most pressing, it’s definitely the fire station” Gavriluk says, noting that the National Guard has facilities on site for equipment maintenance that active-duty troops could use in lieu of a new facility. For him, fires are the big worry.

“We have more training-started fires than any other military installation, bar none,” Gavriluk said. He added that many of the buildings on the base are wooden structures that date back to the 1950s and are vulnerable to fires, but that “the catastrophic impacts are to the terrain if we are unable to contain a large-scale wildland fire that goes on in this area.”

There is a history of such impacts.

During a live-fire exercise on July 30, 2016, troops fired rounds that ricocheted onto a ridge line, sparking what became known as the Range 12 Fire. The blaze rapidly spread beyond the installation, crossing Highway 24 and engulfing 275 square miles. It burned ranchland, habitats and threatened the Hanford Nuclear Reservation. At the fire's peak, over 400 fire fighters responded.

Last January, several Yakima cattle ranchers sued the Department of Defense for nearly $15 million in damages to their land and livelihoods because of the fire. “The Yakima Training Center’s fire-response personnel were not able to contain the fire to the Yakima Training Center due to the high winds and tinder dry conditions,” the lawsuit said.

The lawsuit also noted that the Yakima Training Center has had five major fires since 1987, mostly the result of training in afternoon hours during the dry season.

“The Boylston Fire last year was well over 100,000 acres on this installation, where we had to bring in significant aviation assets to mitigate the fire,” notes Gavriluk.

Wildfire seasons are already getting increasingly destructive as local officials struggle to cope with large fires across the state. According to the National Interagency Fire Center, Washington’s 2018 wildfires destroyed nearly 440,000 acres in the worst fire season in state history, an increase from what had already been a record-breaking fire season in 2017, which destroyed more than 300,000 acres.

The Washington Department of Natural Resource has asked for $55 million from the Legislature to beef up firefighting efforts. News of cuts that may affect the Army’s ability to manage fires in Yakima came as unexpected news to state officials.

“We were aware that they had put in for this project; we were not aware that this was part of the president’s redistribution of dollars,” says Smillie. “Losing any asset is bad. Losing this asset in particular is harmful because we’ve responded to a lot of fires in that area, including last year.”

When the House of Representatives voted in February to block Trump’s emergency declaration, Washington state Republicans joined fellow Democratic lawmakers in their opposition. The lone member of Washington’s congressional delegation to vote in support of Trump’s emergency declaration was Republican Dan Newhouse, whose district includes the Yakima Valley. His office did not respond to requests for comment.

Gavriluk notes that in addition to environmental and property damage, uncontained fires are also a major disruption to military readiness.

Both active-duty troops at Joint Base Lewis McChord and National Guardsmen have been called up with increasing frequency over the summers to help civilian fire crews battling wildfires, taking them away from their regular training. And when a fire breaks out at the training facility, it can bring regular military activity to a standstill.

“It shuts the training down. If we have a fire, I mean, it’s all hands on deck,” he explains. “And then there’s after the fire. We manage it, then we have to stamp it out, go back afterwards to make sure there’s no embers or anything like that that can cause more damage or spark it back up again.” 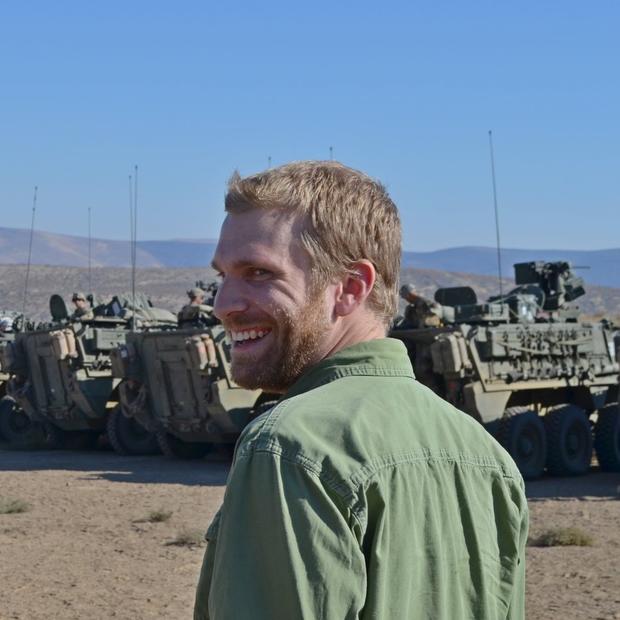