As fine dining makes room for the (relatively) frugal nosher, these local spots are gaining acclaim. 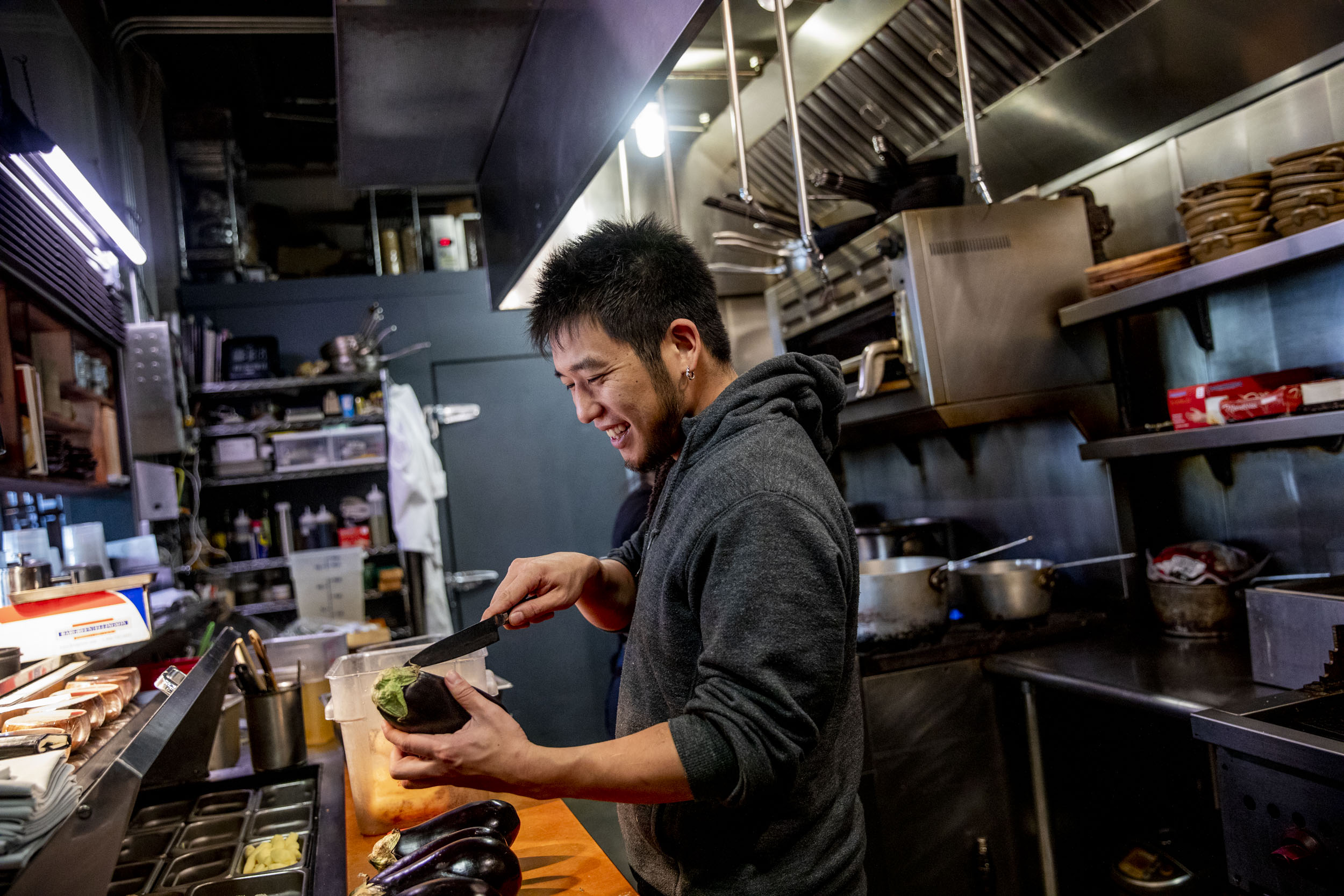 Shota Nakajima, chef and owner of Adana in Capitol Hill, preps for dinner on Feb. 28, 2019. Nakajima is a semifinalist for a 2019 James Beard Award for Rising Star Chef of the Year. He says it is important to him to make fine dining more accessible. (Photo by Dorothy Edwards/Crosscut)

It was the middle of dinner service when Shota Nakajima broke out the champagne. The chef and owner of Adana in Capitol Hill filled the glasses, then hunched over with his phone camera to get the right angle for the perfect shot. He toasted the staff and friends who had gathered to help him celebrate his James Beard nomination. Then he got back to work. All the while, patrons chatted among themselves, enjoying the ramen exclusively served on Wednesday nights.

Correctly served piping hot, the tonkotsu broth is silky where others may be greasy.

As the dish is placed in front of diners, the chef grates foie gras onto the noodles, a flavor that surprisingly doesn’t interfere with the umami of the bowl. While some local ramen spots mistake umami flavor for excessive saltiness, Adana’s ramen is just the right kind of savory. It’s balanced with a bunch of slightly sweet shimeji mushrooms, green onions, and tender pork belly, all of which come together with a perfectly oozing marinated egg. At just $16, the ramen is a steal.

“It’s gotta be rich, deep, but clean and simple,” Nakajima said between services. “Some ramen restaurants I eat at halfway through [the ramen] I’m like wow this is really rich I’m full already I don’t want another bite. You shouldn’t get sick of the ramen broth after four bites.”

When the James Beard nominations were released on Wednesday, they included the usual collection of Seattle spots. The annual awards are considered one of the most prestigious in the food world, recognizing outstanding chefs, notable restaurateurs and up-and-coming prodigies. The winners are also, often, among the most expensive dining option in a given city. Yet, Seattle has consistently surfaced nominees offering prices appropriate for the (relatively) frugal nosher, and this year was no exception.

There’s no doubt that all 25 of this year’s Seattle-area nominees offer food worthy of palate recognition. But places like Seattle's Canlis, the perennial contender with a dress code, to Kirkland’s Cafe Juanita, which serves high-end Italian food, would bust most budgets. Not so for nine of the local semifinalists, which offer up menus that are more affordable, reflecting a shift in fine dining.

Take Adana, with its menu of Japanese comfort food. It offers a $37 three-course meal and a bar menu with food under $16. Before opening Adana, Nakajima ran a high-end restaurant called Naka, which featured a menu ranging from $75 to $170 a meal. Business, though, was slow. And so a new restaurant was born. The idea, Nakajima said was to “change the image” and to make the food “approachable.”

“The first restaurant, I had a lot of friends who wanted to come in and they were just like ‘I can’t afford it,’ ” he said. “I won’t say I’m changing the view of fine dining, for me it’s really simple; I love cooking food and when it was over $100 per person I couldn’t feed my friends and a lot of people and I want people to try my food, that’s my number one thing.”

When Mitch Mayers learned of his restaurant’s nomination he was sitting on the couch with his wife and his 17-month-old. He checked the James Beard site only toying with the possibility of being nominated. Then he looked over to his wife and said: “do you want to hear something insane?” That’s when the wave of texts and phone calls started.

Located in Ballard, Mayers' Sawyer has been open for seven months. It’s the only Seattle restaurant competing for the title of Best New Restaurant with 28 other nominees and its menu takes a very untraditional direction.

The hearty menu has options under $20 that include oxtail nachos, wild boar ribs, a packed poke bowl and a Choco Taco throwback dessert. The check at Sawyer will definitely feel like a discount compared with a four-course meal with a $135 price tag.

“I think that’s part of the reason we were so surprised,” Mayers said, adding that the menu is intentionally designed to be approachable and affordable, a decision informed by Seattle’s relaxed posture.

“People don’t want to have to wear a coat and tie to dinner, but chefs still want to be creative and have ingredients that they stand by,” he said.

Most of the other affordable nominees are relatively new. Belltown’s No Anchor, a semifinalist for Outstanding Bar Program, opened in 2017. Homer, a Mediterranean spot in Beacon Hill whose owner is nominated for Best Chef in the Northwest, is not even a year old. The nominee list for the Best Chef Award is also filled with seasoned restaurants offering cuisine at a bargain, including Eric Donnelly’s Rock Creek, Eric Johnson’s Stateside, Matsuko Soma’s Kamonegi, and Taichi Kitamura’s Sushi Kappo Tamura.

Then there is also Joule, an institution by comparison that’s been around for more than a decade and has made the list enough times that co-owner Rachel Yang can’t recall whether it’s been nominated eight or nine times.

Raised in Korea, Yang said food is a central element of Korean family life, understood as something meant to be shared. She said as food has become more diverse ideas of fine dining have changed within the industry.

“Food doesn’t have to be expensive to be good,” she said.

The spelling of the word "tonkotsu" was corrected after this story was first published.