The last time a guy from Washington ran for president 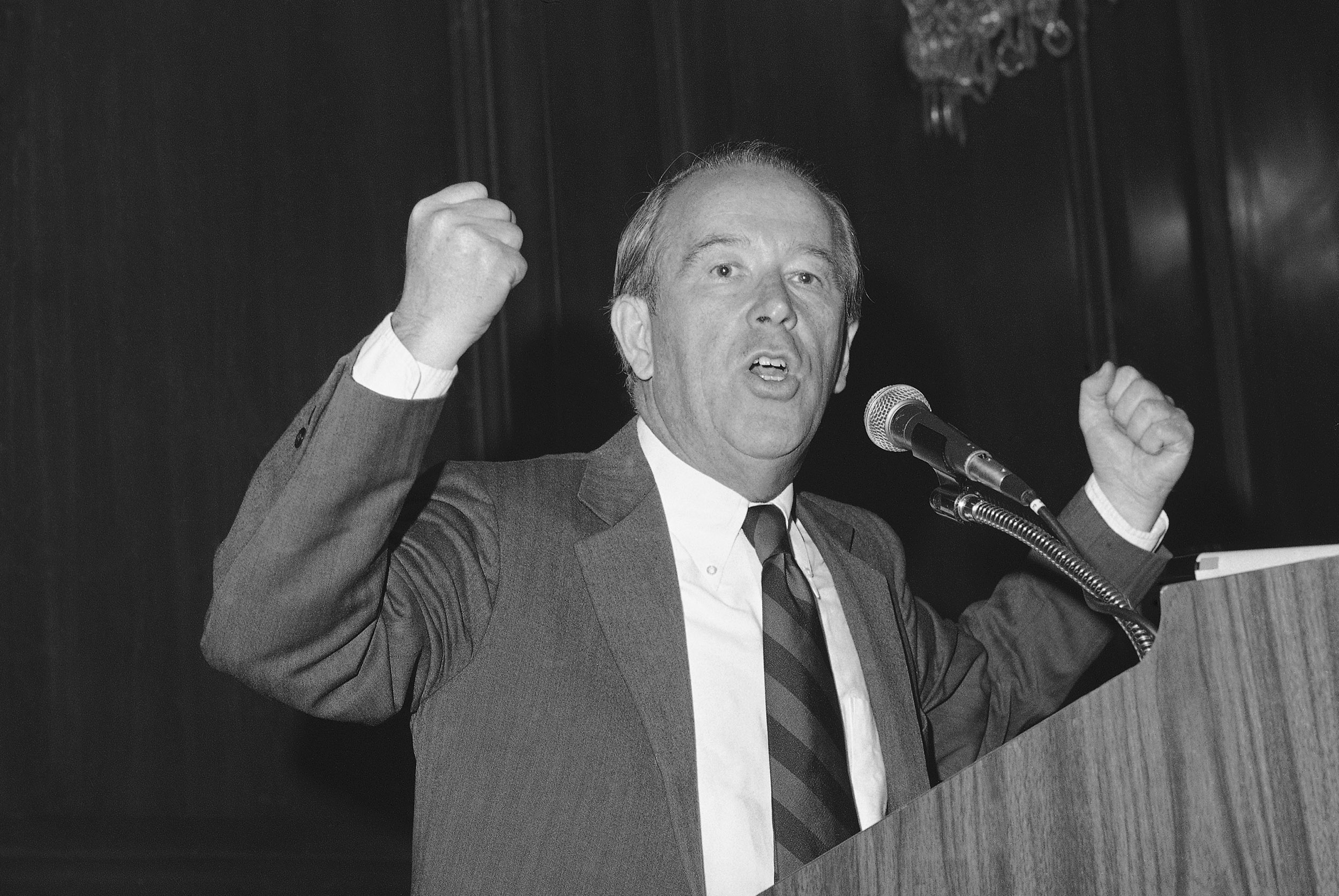 A Republican president who many thought was a crook was up for re-election. Washington state hadn’t supported him during his election. A well-known state Democratic politician with experience in Congress — though largely unknown outside the state — decided to jump into the presidential race, joining a field crowded with Democrats of all stripes eager to take down the incumbent president. A second term for the president was unthinkable. It was critical to have a candidate who could beat him.

The year was 1972; the president, Richard Nixon; and the candidate, Sen. Henry M. “Scoop” Jackson ­– the last Washington state politician to mount a presidential campaign, the first of two attempts. It wouldn’t be precise to draw too many parallels between then and now, but with Gov. Jay Inslee having thrown his hat into the ring. a look back at Scoop’s first crusade offers a view of the opportunities and pitfalls of such an effort.

Jackson was an enormously popular U.S. senator in his homestate, part of a powerful senatorial pair along with Warren G. “Maggie” Magnuson. In 1970, two years before his presidential run, Jackson had been re-elected to the Senate with an extraordinary 82 percent of the vote. Unlike Maggie, Scoop drew bipartisan, crossover support. Just as Washington’s then popular Republican Gov. Dan Evans redefined the liberal wing of the GOP as “Dan Evans Republicans,” Scoop defined the conservative wing of the Democratic Party, “Scoop Jackson Democrats.” Scoop was pro-union, pro-environment, pro-Boeing, pro-Israel, pro-defense, advocate of human rights and a Cold Warrior. He was a hawk on Vietnam.

The field of Democrats other than Jackson included Hubert Humphrey, the former vice president, who lost to Nixon in 1968; Humphrey’s former running mate, Sen. Edmund Muskie of Maine; antiwar candidates Minnesota Sen. Eugene McCarthy and South Dakota Sen. George McGovern; New York U.S. Rep. Shirley Chisholm, the first African-American woman to be a major party presidential candidate; George Wallace, the segregationist Alabama governor, who had bolted the Democratic Party in 1968 to run as an independent but was now running again as a Democrat; former New York Mayor John Lindsay, a Republican who bolted his party, and a bevy of others.

As primary and caucus season approached, a February Gallup poll had Muskie leading at 29 percent, followed by Sen. Ted Kennedy, who was not running that year, at 24 percent, and Humphrey at 23 percent. Everyone else was in single digits, with McGovern at 5 percent and Jackson at 3 percent. For Scoop, his run was a longshot. The newspapers called him a dark horse. His path to victory lay in running to the right of everyone, save George Wallace.

Jackson made clear he was no peacenik; he advocated a Constitutional amendment against school busing. He criticized welfare and advocated public works projects instead. Nixon had won a narrow victory in ’68 by peeling off Rust Belt blue collar workers — the so-called “silent majority” — who embraced the flag and didn’t want “surrender” in Vietnam. Scoop also embodied that approach on the hustings. In Ohio, he accused McGovern of “appeasement” in his Vietnam policy.

Critical to Jackson: winning his home state. On March 7, Washington, without a presidential primary, held its party precinct caucus, which would start the process of picking delegates for the Democratic National Convention. Scoop wanted to go to the convention with all the state’s delegates committed to him; supporters of Muskie, McGovern, Chisholm and others begged to differ.

I remember well what happened next. I was 18 years old, a high school senior and was picked by my precinct to be a delegate to my legislative district and then on to the King County convention. I was young and idealistic, and assumed that, because many of my neighbors and fellow delegates supported McGovern, everyone else did. Eighteen-year-olds had just gotten the vote and we surged into youth activism.

Scoop was nothing, if not organized. His political machine and grassroots operations were impressive. Two slates of delegates emerged from those caucuses: the Jackson slate and the anti-Jackson slate. I was a member of the latter. Seattle Times columnist Dick Larsen said the county convention promised a Democratic fight that could be an ideological “bloodletting,” but the anti-Jackson forces were steamrolled on a series of votes that eliminated them from moving on. The Jackson juggernaut took all of the state’s delegates. McGovern, the closest rival, with about 25 percent delegate support, ended up with zero. There was no proportionate representation. It was a successful blitzkrieg by Washington’s favorite son.

But it didn’t last. Jackson underperformed in the primaries. But it wasn’t all his fault. We know now that Richard Nixon’s dirty tricksters went out to sabotage the campaigns of moderate rivals. Moles were installed in Muskie’s campaign, and he was falsely accused of having slandered French Canadians. Jackson had to fight false rumors that he had fathered an illegitimate child. His son, Peter Jackson, says the sabotage was more than pranks. He says the tricksters turned out the landing lights at an airport where Scoopon was headed for a campaign stop. That could have caused a crash.

But there was some self-sabotage as well. Peter Jackson says his father was tone-deaf to the anti-war war movement. He’d supported the 18-year-old vote, but couldn’t tap into the youthful energy it unleashed. He took to lecturing the baby boomers. Jackson says of his father “In 1972 Scoop was still in a 1960 presidential mindset, back when he served as JFK’s Democratic National Committee chair and decision-making was insular and boss-centric.”

Between the passion of anti-war people, like me, and such election interference — which, by the way, also included the soon-to-become-famous Watergate burglary of the Democratic National Committee — McGovern won the nomination with the help of some new not-boss-centric party rules. While delegates backing other candidates generally got behind the winner, Jackson stubbornly did not release his delegates. He came in a distant second, garnering a kind of bitter protest vote for right-leaning Democrats.

After the Democratic National Convention, Jackson could barely bring himself to support McGovern. In October, in a Seattle Times story headlined “Jackson lends chilly support to McGovern,” Scoop predicted, correctly, that the Democratic nominee would carry only Massachusetts and Washington, D.C. I attended a fundraiser featuring Ted Kennedy, Scoop and Maggie where Jackson refused to utter McGovern’s name and blandly suggested fellow Democrats support “the Democratic ticket.” As an anti-Nixon voter, I resented Jackson's unwillingness, once he'd lost his party's nomination, to not lift a finger to beat Tricky Dick. 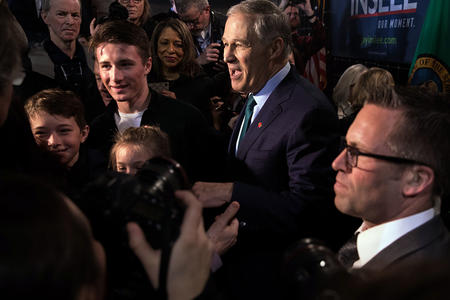 So what does any of this have to do with Jay Inslee? In some respects Inslee has advantages Scoop didn’t have or take. He has both experience in D.C. as a congressman and as governor in Olympia, and he’s running with his party’s current, not against it. Jackson alienated many Democratic base voters with his hawkish stance on the war; Inslee is in the mainstream with Democratic voters on climate change. Inslee will seek support of millennials with his climate-change embrace. Inslee does not have a statewide machine, nor is he as popular as Scoop was with state voters.

Inslee can take heart from one thing: In February 1972, McGovern and Jackson were in the low single digits, yet one of them became the nominee, despite the name familiarity and resumés of some very qualified opponents. Inslee has polled at zero, but he’s also a kind of blank-slate who might find traction in early primary states. The state Legislature has voted to move Washington’s presidential primary up two months to March 2020, so it could have more relevance. That could be an advantage if Inslee, in a crowded field, can get a homestate bump.

He wouldn’t be the first candidate to come from nowhere. McGovern pulled that trick in ’72 and Jimmy Carter did it in ’76, beating Scoop in his second and final attempt to get to the White House. Still, most single-digit candidates don’t advance. Some of the single-digiters in ’72, including Patsy Mink, Wilbur Mills, Vance Hartke and Sam Yorty, barely left a mark on presidential politics. Jackson had national experience and serious chops. He was a great senator, even if he had no real constituency outside of Washington state or the halls of the U.S. Senate. His sudden, early death in 1983, at age 71, was a devastating blow to Washington. There are many times in the ensuing decades when I have felt grateful for Scoop’s work on the environment, for tackling difficult problems in constructive, serious ways. His senatorial legacy is strong.

Ted Van Dyk, the former political adviser, columnist and author. knew many of the principals in the ’72 campaign. If you love politics you should read his University of Washington Press memoir Heroes, Hacks and Fools for frank insider views of the greats he worked with. He thinks Inslee is a “lightweight.” compared with Scoop, “struggling to identify himself as a climate change champion, where others have similar views,” he says.

Opponents will move to define him before he can. Peter Jackson offers three pieces of advice based on his father’s experience. One is go big or go home. Because Washington is not a swing state, you’re not in the running for vice president. Two, “avoid fractures in your constituency,” he says. Scoop’s problem was that Big Labor’s support split among him, Muskie and Humphrey. It’ll be tough for Inslee to “own” climate change. “Can Inslee corral a majority of the climate/enviro constituency?” Jackson asks. Lastly, “Inslee widely tacks to the millennial agenda (climate, cannabis, health care), but so do [Kamala] Harris, [Julian] Castro, [Cory] Booker, etc. He’ll need to distinguish himself somehow.” A $1 million ad buy from a climate-related political action committee (so-called Super PAC) supporting Inslee could help him out of the gate.

And unlike Scoop, even here in blue Washington, Inslee doesn’t have the political machine or crossover base that Jackson did. According to the Crosscut/Elway Poll, only about 37 percent of state voters said they’d vote for Inslee for president if the chance arose. His approval rating as governor has hovered in the mid-40s. Van Dyk says Jackson’s ’72 odds of getting the nomination were maybe 1 in 20; he handicaps Inslee’s as 1 in 5,000.

Watching Inslee’s campaign unfold, we’ll know whether the experiences of the last guy who ran for president from Washington had any relevance for the new guy taking the plunge for 2020.