Sawant accuses mayor of retaliation amid fight over homelessness

The tension hinges on a controversial service provider and Durkan's pick to lead the homelessness response. 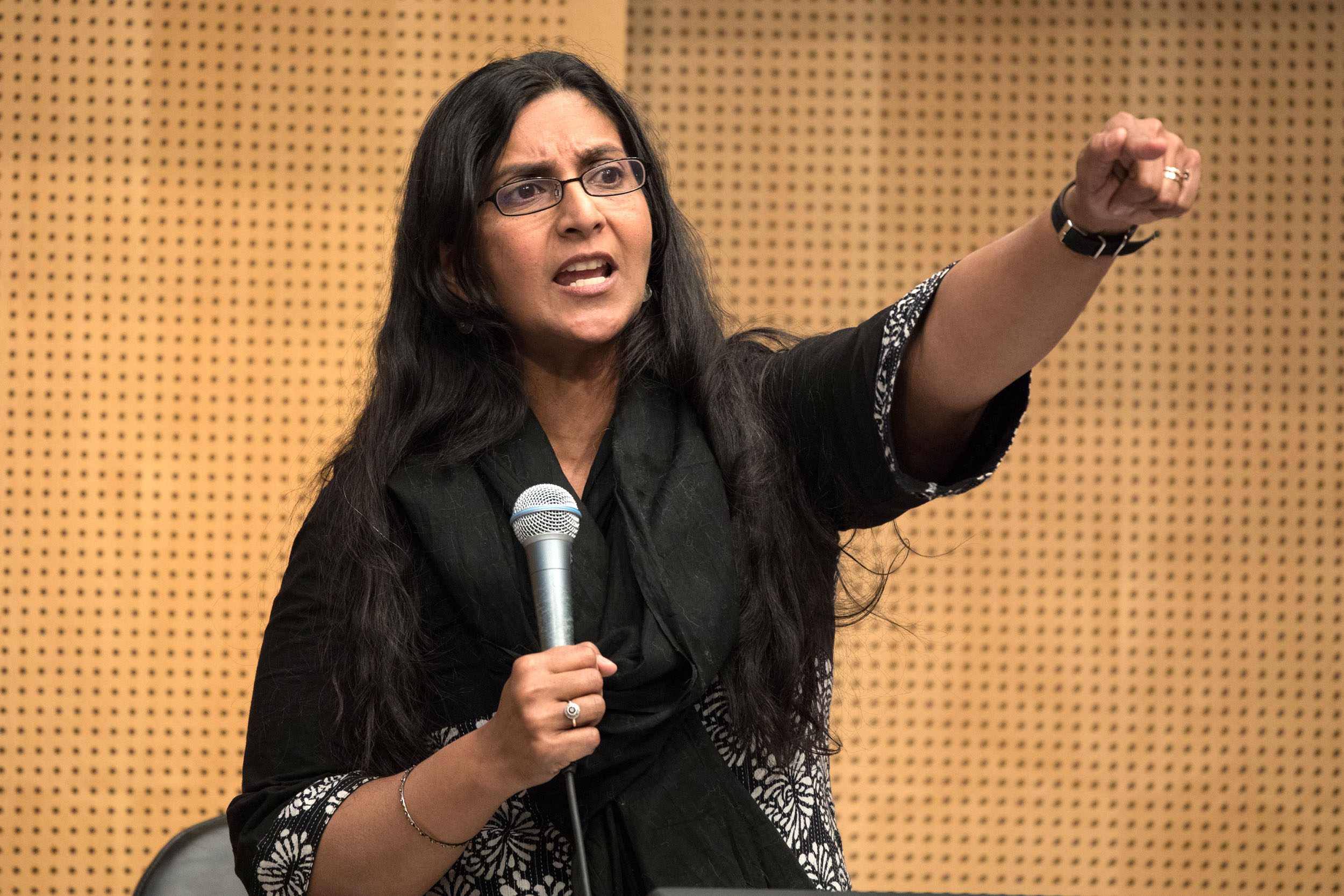 Councilmember Kshama Sawant during a meeting of the Seattle City Council session at City Hall on June 12, 2018. (Photo by Matt McKnight/Crosscut)

Earlier this week, Mayor Jenny Durkan shortened the city’s contract with a controversial shelter operator, SHARE/WHEEL. In an escalation of tensions, Councilmember Kshama Sawant sharply criticized the move on Thursday, accusing the mayor of retaliating against the organization for opposing Durkan’s selection to lead the Human Services Department (HSD).

A spokesperson for the Human Services Department said the decision was to more closely monitor the organization’s data collection, an explanation that had at least one of Sawant’s colleagues, Councilmember Lisa Herbold, convinced.

But the decision to end the contract early — with the possibility of extension — has nevertheless brought together what had been at least three divergent points of conflict into one: the back and forth between the Seattle City Council and the mayor over funding SHARE/WHEEL; the ongoing fight to confirm the mayor’s pick to lead the Human Services Department; and recent confusion about how “success” is being measured when it comes to homeless services.

The entire situation encapsulates the mounting pressure within city hall to address homelessness and the friction between elected officials over what should be prioritized first.

In her proposed budget last year, Durkan gave SHARE/WHEEL a six-month runway before the organization lost funding. The shelter operator has been steeped in controversy for years and, for Durkan, cutting its funding was part of an effort to create more accountability in addressing homelessness.

But following protests from activists, the council quickly restored just over $1 million to the organization, enough to fund it through 2020.

Now Durkan is once again trying to shorten the leash of SHARE/WHEEL — not by cutting its funding, but by ending its 2019 contract in late June, rather than the end of December.

“The second six months will be awarded assuming continued progress on meeting goals,” Meg Olberding, spokesperson for the Human Services Department, said in a message to the council. “HSD will monitor all performance indicators on a monthly basis, and regular communication with SHARE/WHEEL will ensure there are no surprises. To reiterate, our intention with this contract structure is to encourage full realization of their mission to serve the most vulnerable persons in our community and continue to help them achieve permanent housing, which is the method by which homelessness is ended.”

Herbold saw the explanation as an acknowledgement that SHARE/WHEEL was making progress. “To me I read this response as being really sincere and not like anybody’s playing any games,” said Herbold.

Sawant and members of the nonprofit organization, however, tie the decision to recent political dustups around who will lead the city’s homelessness response.

Durkan chose to elevate acting director of HSD, Jason Johnson, to permanent director without going through a competitive process — which is not uncommon. But the department staff members were upset by the process, so much so that Deputy Mayor David Moseley convened a tense meeting for all HSD staff to address their concerns, according to people who attended.

Responding to that frustration, Sawant has refused to give Johnson an up or down vote. She’s instead hosted two public meetings for people to vent frustrations about his appointment. The next one is Monday.

Among those voices speaking out have been members of SHARE/WHEEL.

“It really seems like it’s out of retaliation,” Sawant said Thursday of the change to the contract, “because SHARE and WHEEL activists … have spoken in solidarity with the Human Services Department employees who are demanding that the mayor hold a transparent and equitable search committee to find the new director. It really seems to me like it’s retaliation.”

In response, Mark Prentice, spokesperson for Durkan, did not address Sawant's retaliation claim. "It is disappointing that some continue to oppose accountability and programs that work," he said. "While [we] continue to need emergency shelters, they, too, must agree to be accountable."

Durkan, meanwhile, has excoriated Sawant for not giving Johnson a vote. “It is unacceptable that you would delay filling a key position tasked with assisting our most vulnerable and overseeing the City’s homelessness response, a defining issue of our time,” Durkan wrote to Sawant in a January message.

For her part, Herbold said she appreciates that people are voicing concerns about the process, but would prefer to address them when a nominee is not waiting in the wings.

SHARE/WHEEL operates a network of “self-managed” shelters and tent encampments in and around Seattle. It almost exclusively focuses on providing basic shelter so people can get off the street — a model that conflicts with the city’s new emphasis on moving people into permanent housing.

Since it began in the early 1990s, the organization has also been accused of financial mismanagement, requiring residents to engage in political activity and even discouraging shelter occupants from seeking permanent housing. In October, SHARE/WHEEL pulled out of managing Licton Spring Village, a tiny-home encampment, saying they were stretched too thin to provide safe management.

But its management contends that, without SHARE/WHEEL, the city would have hundreds more people on the streets.

“We’re doing great work as far as the organizations that provide basic shelter,” said Gary Eyerly, a quasi-employee who’s been with the organization for 3 1/2 years. Losing that contract, he said, would mean “11 shelters shut down and potentially 400 to 500 people are hanging out on the streets.”

Complicating the political tension is a recent dispute over how success is being measured by the Mayor’s Office. In her State of the City message, Durkan boasted of 7,400 households moved to permanent housing. But that number likely includes duplicates — because the same person can exit from multiple programs.

Both Sawant and Eyerly pointed to this opacity as reason to continue to provide a long-term contract.

“I’m not sure how they are in a position to judge what SHARE and WHEEL have done,” Sawant said.

Herbold also said she’s interested in learning more about how SHARE/WHEEL is being judged. In the meantime, though, she said the mayor’s office has assured the council that the money they allocated for SHARE/WHEEL will not be spent elsewhere.

“I just in general prefer to look at the glass as half full,” she said.