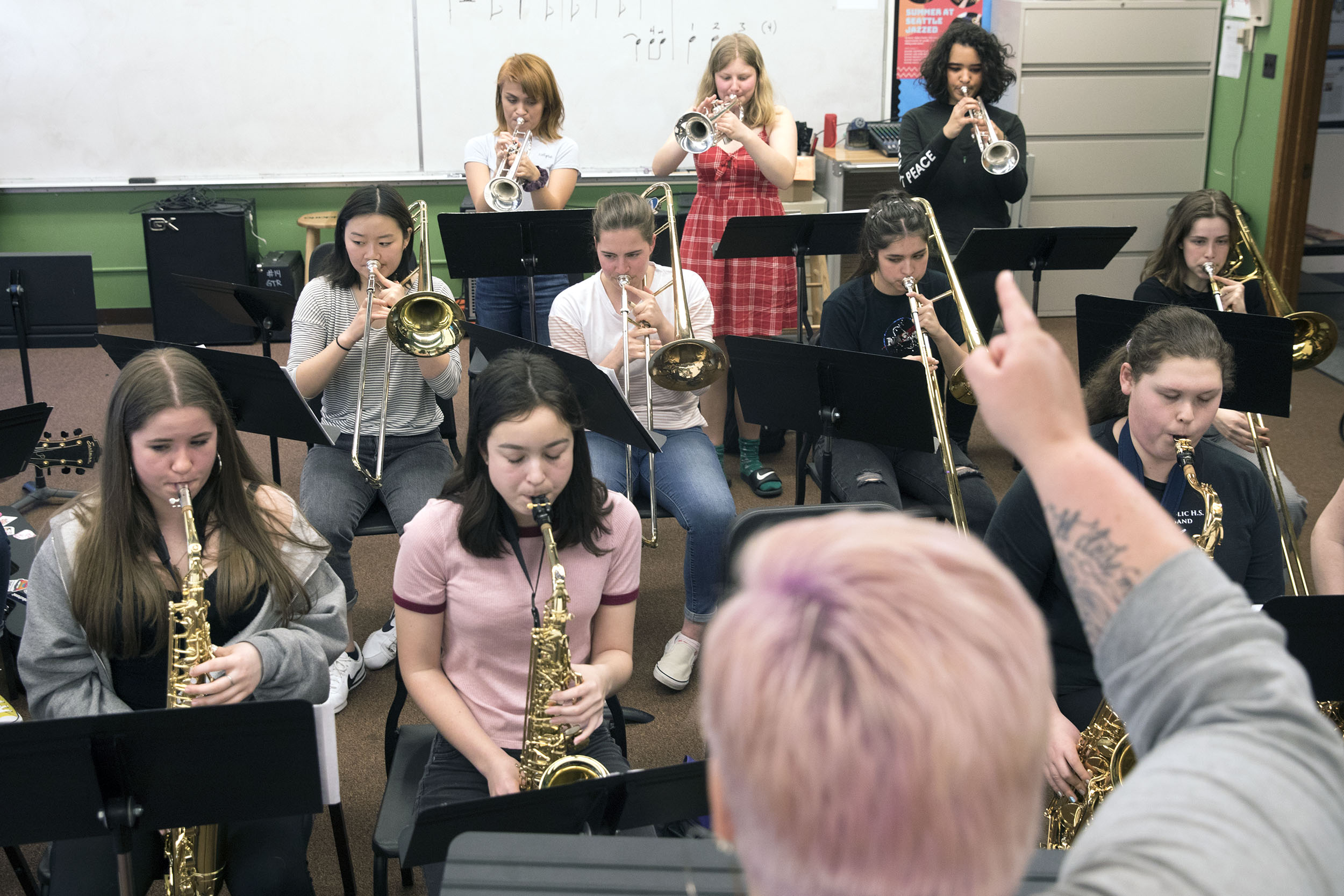 Members of an all-girls jazz ensemble are led by educational director Kelly Clingan during a rehearsal session at Seattle JazzED inside of MLK Fame Community Center in Seattle, March 28, 2019. (Photo by Matt M. McKnight/Crosscut)

Jahnvi Madan went to band and jazz band practice Thursday morning at Bellevue’s Newport High School. Afterward, she practiced the baritone sax at home all day before heading to Seattle to join 16 other musicians in a packed classroom at the Martin Luther King Community Center.

Her afternoon band rehearsal was uniquely different: all her bandmates are female high school musicians. On Thursday, they were prepping for the Savannah Music Festival’s Swing Central Jazz competition, where Seattle JazzED’s Girls Ellington Project will be the first all-girl band to ever compete in any major national competition, according to band director Kelly Clingan.

Only 12 bands from across the country made the festival cut and submissions were all blind, which means the judges weren’t aware of the gender makeup.

Madan is the only band member who has attended the festival before. Her high school band was a finalist last year.

The 17-year-old musician, who also plays the clarinet, was wearing big round glasses, a loose red sweater and multicolored Vans as she rehearsed. She has an ear for music: throughout practice, she didn’t hesitate to make suggestions on phrasing and the band’s upcoming performance.

Madan said she’s been second-guessed as a female jazz musician by people whom she looked up to in the jazz scene. She said there have been times when she felt she had to prove herself because her male counterparts didn’t believe in her ability.

Her bandmates can relate.

“I think to be a girl in jazz you have to be twice as good to be considered equal,” said guitarist Faye Alesse, a 10th grader at Roosevelt High School. “Everyone here is really good because they have to try twice as hard.”

The conversation then turned to being “vibed” — a word in the jazz world that means being undercut or judged, the girls explained. The musicians talked about the times they’ve been vibed.

“I was a freshman playing in the senior wind ensemble playing flute, and I had a solo part when I heard laughing and booing in the back,” said Brooke Lambert, an alto sax and flute player in the 10th grade. “There were these two guys and they had a tuner and were watching me play to see if I was out of tune.”

Parker Crotty, a senior trombone player at Ballard High School, remembered introducing herself to jazz singer Dena DeRose in the lobby after a jaw-dropping concert and she assumed Crotty was a singer. DeRose was surprised to learn Crotty played trombone.

“I wasn’t offended,” she said, adding that she found it interesting that even a woman assumed she didn’t play an instrument.

The supportive environment of being in an all-girls band has influenced Madan’s decision to pursue jazz in college. Madan was accepted into both of her dream schools in Boston: Berklee College of Music and the New England Conservatory.

“I honestly don’t think I’d be going into jazz if I wasn’t in this band and encouraged by these people,” Madan said.

The impending arrival of the Girls Ellington Project at the Swing Central Festival is already making waves. Band director Clingan received an apology from the festival for a lack of female musicians and female clinicians. The festival email also noted it would commit to making gender parity a priority in the future under new leadership.

“Every moment of this thing is historic,” said Clingan, who also has her own unique style: a tattooed feather on her neck, short pink hair and snakeskin Doc Martens shoes.

On Thursday, the band hadn’t practiced for a couple of weeks so it was rusty during rehearsal. But quickly Clingan made adjustments here and there until she heard what she liked.

“Just a little more stank on it,” Clingan directed.

As Clingan directed, the band members giggled and joked and worked as a team.

“It’s really easy to get wrapped up in all the little nuances and all the notes you have to play or thinking about how much competition there is going to be,” said Alexis Kim, who plays trombone. But what the band never loses sight of is having fun.

Joy, she said, oftentimes gets lost when you play music. But “that’s never been the case for this band.”

The band members discussed what the band would wear for the festival performance. The opted for all-black with no accessories; “Let the music speak for itself,” Lambert said.

And then Clingan counted them off to rehearse a new song. "And a one, two, one, two, three, four."