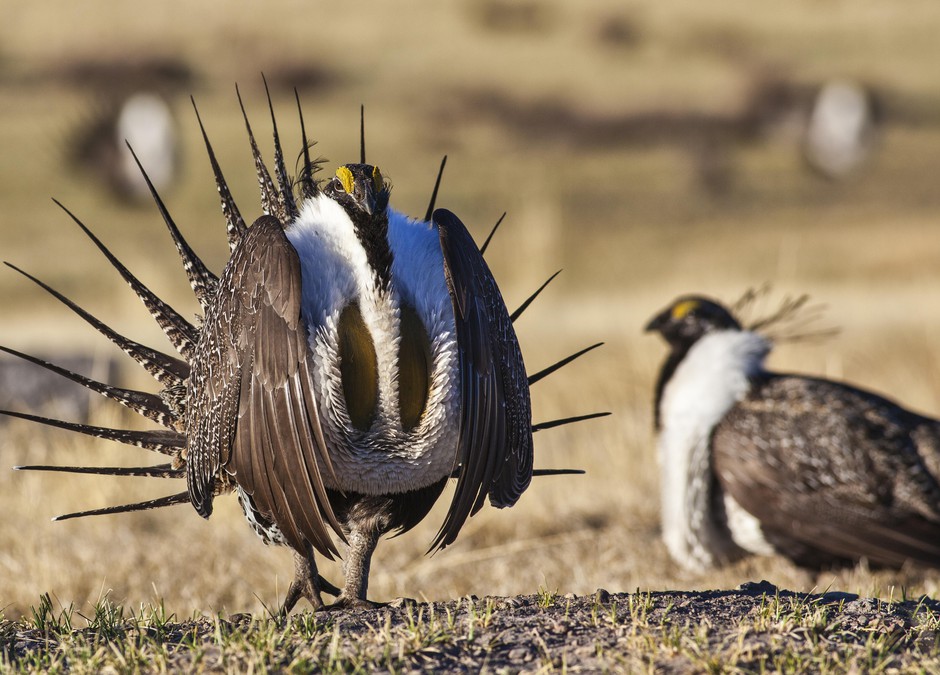 A male greater sage grouse struts its stuff on Bureau of Land Management land in this April 21, 2012, photo. (Photo courtesy of BLM.)

The Trump administration Friday lifted restrictions aimed at protecting greater sage grouse across seven Western states. In Oregon grazing restrictions are being removed in 13 locations that provide habitat for the imperiled birds.

Ranchers are supporting the move, saying proper grazing will help sage grouse. But conservation groups said the controversial birds need all the protection they can get.

The revisions will be more far reaching in other Western states than in Oregon. In other states, the federal government had not been allowing infrastructure development in key areas, but it will now give waivers and exemptions for oil and gas drilling in some cases. The plans no longer strictly steer oil and gas leases away from important sage grouse habitat.

Conservation groups said some updates were needed, but these plans are full of loopholes that will only further endanger the sage grouse.

“We now have plans that are less protective from the biggest threats to sage grouse, and those protections that are remaining are less certain to be applied and do not work together across the landscape,” Nada Culver, senior counsel and director of the BLM Action Center at The Wilderness Society, said in a statement.

The federal government said the goal of the updates was to better align federal habitat management with state management plans.

“The plans adopted today show that listening to and working with our neighbors at the state and local levels of government is the key to long-term conservation and to ensuring the viability of local communities across the West,” Acting Interior Secretary David Bernhardt said in a statement.

These updates will leave more sage grouse management up to the states. That concerned some conservation groups. They said a landscape-based approach would be more effective at preserving sagebrush habitat. Many governors welcomed more state control.

“Balancing sage grouse habitat protection and economic development requires mitigation of negative impacts. This agreement is a critical step that marks a shift away from planning toward active conservation and landscape management to protect this iconic species,” Oregon Gov. Kate Brown said in a statement.

In Oregon, the updated plans will remove grazing restrictions on small areas of BLM land that had been set aside for research purposes. Scientists had hoped to study what happened to habitat when cattle aren’t around.

“If the BLM is not willing to manage less than 1 percent of sage grouse habitat in Oregon to protect and study ecological values, then clearly the agency is not serious about protecting sage grouse or their habitat,” Austin said in a statement.

Ranchers said responsible grazing is good for sage grouse habitat. They said there are other areas in Oregon where there hasn’t been any grazing, and sage grouse numbers there are similar to grazed areas. So these small "research natural areas" aren’t needed.

Tom Sharp, a rancher in Burns, Oregon, and the president-elect of the Oregon Cattlemen’s Association, said that when cattle are managed properly, they’re known to improve sage grouse habitat. He said that’s why it’s important to manage even these small areas.

“Properly managed livestock grazing can do good things for the land,” Sharp said. “That’s why we originally objected to the [research natural areas]. Within the research natural areas, they still have to deal with invasive plants that cattle can be used as a management tool. They still have to be concerned about fuel loading of grasses and vegetation that can accumulate on those lands.”

Sharp said that when cattle eat those grasses, it helps reduce those fuels that help wildfire spread. He said the BLM seemed to agree with those points.

Cattle have not been stopped from grazing in these “research natural areas” since 2015, when the restrictions were put in place.

Ranchers have also argued that restricting grazing can be a “hardship” for people who use those areas as forage for cattle.

Cattle have not been stopped from grazing in these “research natural areas” since 2015, when the restrictions were put in place.

Sage grouse are found in 11 Western states. Although their numbers were once plentiful across the West, the birds have dwindled in recent years. They face a wide range of threats, from oil and gas drilling in some states to encroaching juniper trees, wildfires and overgrazing in the Northwest.

The birds need large swaths of land for their quirky mating rituals, to raise their young and to overwinter. Their health is said to indicate the health of the entire sagebrush ecosystem and the 350 other species that live there, including mule deer, burrowing owls and pronghorn.

“By eroding those plans mid-implementation, the administration has made it incredibly difficult to create a more resilient public lands management model – one that not only can balance the pressures of development and recreational uses, but also anticipates and addresses cumulative impacts like drought, wildfire and invasive species that are less difficult to predict and withstand,” said John Gale, with Backcountry Hunters and Anglers, in a statement.

Friday’s updates come after often-opposing groups hammered out a compromise for a landscape-based approach to keeping the birds off the Endangered Species List. Those plans, approved by the Obama administration in 2015, were seen as a new way forward for wildlife conservation.

But they faced backlash from some state governors, industry, ranching and conservation groups.

“What earned its place as the most hopeful conservation success story in American history has suffered a grave setback that threatens not only the greater sage grouse, but also the entire sagebrush ecosystem,” Brian Rutledge, director of Audubon’s Sagebrush Ecosystem Initiative, said in a statement.