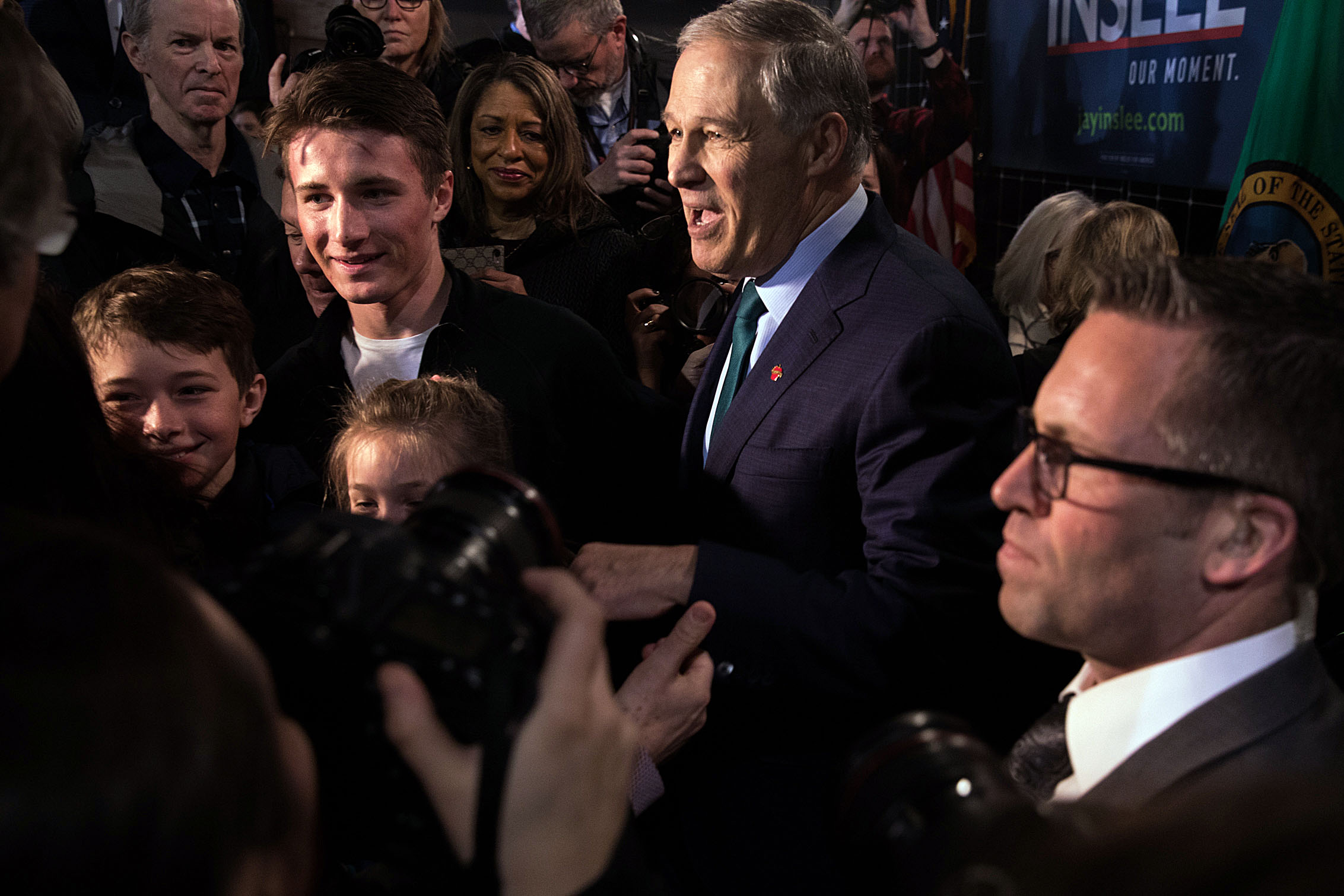 For years, Washington Gov. Jay Inslee has built much of his reputation around being an advocate for the environment. So it came as no surprise that, when the Democratic governor finally announced his run for president on Friday, he pledged to make combating climate change the chief focus of his campaign.

During his remarks, Inslee referred to the fight against climate change as an issue of equity, saying, “There is no other issue that touches so much of what we care about.”

“It is the communities of color that suffer from climate change first and worst,” the second-term governor said.

If there were any doubt of his climate focus, Inslee kicked off his presidential run at A&R Solar, a solar-panel installation company in South Seattle. While doing so, he vowed to not accept donations from fossil fuel companies, a pronouncement that drew cheers from members of the roughly 200-person crowd.

Yet during his speech, Inslee, 68, also alluded to some of his other positions he hopes will endear him to progressive voters — from his vote against the Iraq War in Congress to his push to end the death penalty in Washington state.

Besides the environment, here are some of the other main issues Inslee seems to be emphasizing as he launches his unlikely bid for the presidency.

Months before announcing his campaign, Inslee boasted to talk-show host Bill Maher that Washington has “the best weed in America.”

On Friday, he spoke in favor of decriminalizing marijuana use across the country, as Washington state voters did seven years ago, when they passed Initiative 502.

“We’ve legalized marijuana — and it’s about time we do it nationwide,” Inslee said Friday.

Inslee also touted in his speech how Washington state has “taken on" the National Rifle Association by expanding background checks for gun purchases, as well as by “protect[ing] victims of abuse.”

But he said he thinks it is time to go further — namely, by passing an assault-weapons ban.

Getting rid of the Senate filibuster

In recent days, Inslee has come out strong against the filibuster requirement in the Senate. The rule ensures that a 60-vote supermajority is required to pass most major legislation in Congress’ upper chamber.

In an email to supporters Wednesday, Inslee called the filibuster an “archaic, anti-democratic relic” that “has been weaponized” by Senate Majority Leader Mitch McConnell, R-Ky., “to block progress.”

“We have a climate in crisis. Our lives are on the line,” Inslee’s campaign email said. “ ... We must focus on solving problems together, not blocking solutions.”

On Friday, Inslee said he was “proud to have been the first governor” to stand up to President Donald Trump’s January 2017 travel ban, which affected refugees as well as travelers from seven majority-Muslim countries.

As governor, Inslee also has made a point of welcoming Syrian refugees to Washington state.

“I am running for president because, unlike the man in the White House, I believe in all the people who make up America,” Inslee said Friday.

On Friday, Inslee told his supporters that if he were elected president, he would stop taxpayer money from going to oil and gas companies in the form of subsidies.

Inslee also recently told MSNBC’s Ari Melber that he thinks something needs to be done about corporations that are “essentially blackmailing local communities by threatening to move if they don’t get these giant tax breaks.”

That answer came in response to a question about how New York state offered Amazon large tax incentives to locate new offices there.

“I don’t know the specifics of that,” Inslee said about Amazon canceling its expansion plans in New York. “But I do know on multiple occasions, corporations have threatened to take thousands of jobs out of communities if they don’t get a tax break.”

The comment is especially interesting because as Washington’s governor, Inslee signed off on a massive tax break for Boeing in 2013. The 16-year, $8.7 billion tax package was “the largest corporate tax break any state has ever given to a single company,” the Washington Post wrote at the time.

It’s unclear whether Inslee has come to regret the Boeing deal in recent years. But regarding his "blackmailing" comment, he told Melber, “We need to find a mechanism to not allow communities to be threatened in that way.”

“I’ve got some ideas about that using our tax code to protect our people,” he said.

Inslee did not elaborate on those ideas when announcing his campaign Friday.