The math has been a little fuzzy, but Oregon and California offer clues. 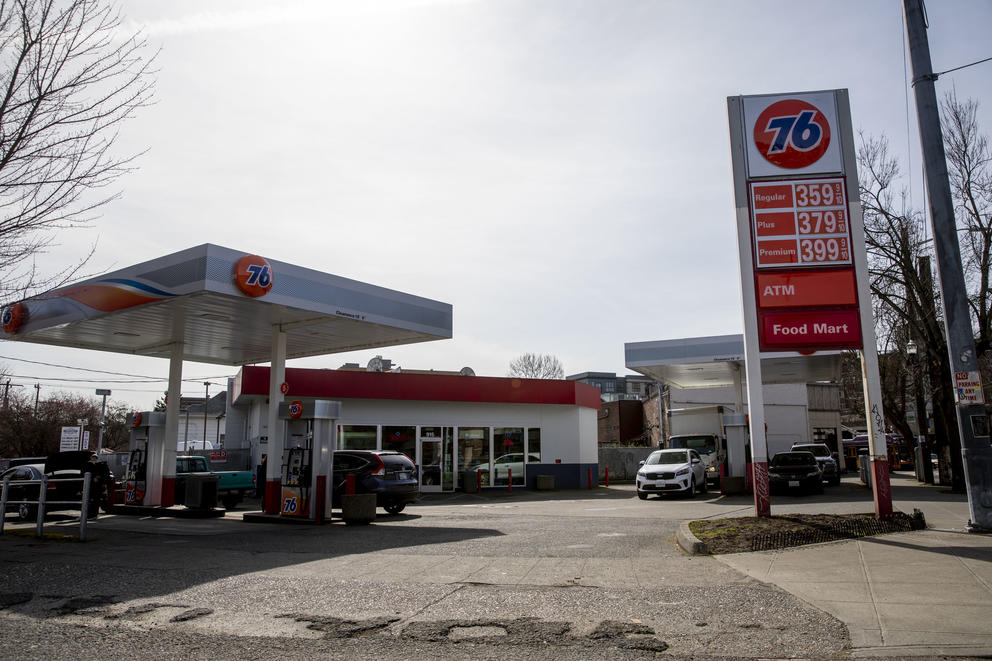 A gas station in Seattle on March 15, 2019. (Photo by Dorothy Edwards/Crosscut)

The projections thrown around on the floor of the state House last week were all over the map. Adopt a new low-carbon fuel standard, many lawmakers said, and Washington’s gas prices will soar.

The cleaner fuels proposal aims to reduce the state's greenhouse gas emissions. But to date, much of the debate has centered on how much new standards might cost consumers.

Opponents of the policy have pointed to California and Oregon, both of which have adopted similar clean-fuel standards in recent years, as evidence that gas prices will increase significantly.

“I’m afraid of those costs for the citizens of this state. I’m afraid of them having to pay at the pump 13, 15, 30 cents more a gallon,” said state Rep. Andrew Barkis, R-Olympia, calling Oregon's price increases a "hockey stick effect.”

Another lawmaker, state Rep. Matt Shea, R-Spokane Valley, threw out the figure of potentially “a dollar” per gallon increase.

Meanwhile, Democratic supporters of the low-carbon fuel standard disputed that those types of price increases would occur.

“Our neighbors to the south in Oregon have not seen a 16-cent increase or a 20 percent increase,” said state Rep. Joe Fitzgibbon, D-Seattle, the prime sponsor of the clean-fuels bill in the House.

So what exactly has happened in Oregon and California?

To date, neither state has seen increases in gasoline prices as dramatic as some of the larger numbers that have been thrown out, according to estimates from each state’s clean air agency.

However, both states’ programs are in their early stages right now. As the clean-fuel standards continue to get more stringent in the coming years, retail gasoline prices are expected to rise at least somewhat.

At the same time, many of the projections are estimates of the maximum possible price increases. That means some of the estimates are likely to end up proving high.

The low-carbon fuel standard is part of a suite of climate proposals Washington Gov. Jay Inslee is pushing this year. Inslee, a Democrat now in his second term, recently announced he is running for president on a platform of fighting climate change.

The governor’s office has projected that Washington’s clean-fuels standard could reduce the state's greenhouse gas emissions by 3.4 million metric tons per year by 2035. In terms of emissions reduction, that’s the equivalent of taking roughly one in five vehicles off the road, according to Inslee’s office.

Oregon’s clean-fuels program requires reducing the carbon intensity of gasoline and diesel by 10 percent by 2025.

For fuel importers and producers, that means lowering the greenhouse gas emissions associated with fuels over their entire life cycle, from extraction to combustion. Even how a fuel is transported plays a role in determining its carbon intensity.

Like the proposal in Washington, Oregon’s clean-fuels standard ramps up over time. Fuels that exceed the standard in a given year generate deficits, which must be made up using credits. Credits can be generated in several ways, including by producing fuels that are cleaner than the standard. Credits can also be bought and traded.

Cory-Ann Wind, Oregon’s clean fuels program manager, estimated the program may have increased retail gasoline prices by a maximum of about 2.2 cents per gallon since 2015. That’s based on the prices of credits on the market in January, as well as the current requirement to reduce carbon intensity by 1.5 percent, compared with 2015 levels.

Yet even the 2.2-cent figure is still probably an overestimate, said Wind, who works for Oregon’s Department of Environmental Quality.

That’s because it assumes that fuel producers are buying all of their credits on the market, rather than generating them themselves by meeting or exceeding the clean-fuels standard, she said.

“Our calculation assumes that all of those costs are passed down to the regular consumers, and we know in reality that is not the case,” Wind said.

Since Oregon’s clean-fuels program went into effect in 2016, regulated companies have been exceeding the law’s requirements. Because of that overcompliance, they’ve built up a bank of more than 450,000 unused credits. Those banked credits can be used to reduce the cost of compliance in later years, when the standard gets stricter and compliance gets harder, Wind said.

Wind said that going forward, using the banked credits should help mitigate some of the price effects at the pump.

While Wind’s agency is required to post annual data on retail gasoline prices, it isn’t required to produce long-term projections for how the clean-fuels standard might affect gas prices in the future.

The agency is, however, required to calculate how much the program helps reduce pollution. On that front, the agency reported that Oregon’s clean-fuels standard prevented 929,105 metric tons of greenhouse gas emissions in 2017.

The state has a goal of reducing its annual emissions by about 50 million metric tons by 2050.

California has more years of experience, having started its clean-fuels program in 2011. The California law requires 10 percent cleaner fuels by 2022, and a 20 percent reduction in carbon intensity by 2030. Those goals are compared with a 2010 baseline.

At first, California didn’t see much change in gas prices as a result of its program, according to estimates from the state’s Air Resources Board. That was partly because, between 2013 and 2015, compliance requirements were frozen by a court ruling.

Last year — the eighth year of California’s program — there was a bigger uptick, as fuels were required to be 5 percent cleaner than they were in 2010. The Air Resources Board estimates that, in 2018, gas prices could have risen by a maximum of 8.9 cents per gallon due to the low-carbon fuel standard.

Those estimates come with the some of the same caveats as Oregon’s, however: They don’t contemplate fuel companies generating their own credits via compliance, or using credits already in the bank, said James Duffy, the California Air Resources Board's manager for alternative fuels.

For that reason, he said the agency’s calculations should be viewed as the “upper limit” for how much prices could potentially rise.

The Air Resources Board puts out a calculator that can project retail prices out as far as 2030, but those projections suffer from the same limitations, Duffy said.

The agency’s calculator suggests that, if credit prices stay the same as they are today, retail gas prices could rise by as much as 44 cents per gallon by 2030. That would be the 20th year of California's program.

Officials at the Air Resources Board don't think that scenario will actually happen, though.

“It assumes [companies] go out on the market and buy every one of their credits at the current market price,” Duffy said. “But we know they are going to take advantage of any opportunity to generate credits below the market price. They can produce their own alternative fuels, they can buy alternative fuels from producers and blend those, they can generate credits by doing emissions reduction projects at their refineries.

"They have a whole host of different options to generate credits on their own at less than market price.”

Right now, he said, California also has a bank of about 8.5 million unused credits that aren’t factored into the agency's price projections.

All told, his agency estimates that California's clean-fuel standard has prevented the release of more than 35.8 million metric tons of climate-changing gases since 2011.

The state House passed the bill on a 53-43 vote last week.

State Rep. Drew Stokesbary, R-Auburn, said he doesn’t think the price information from Oregon is very illustrative, since the state is only now entering the fourth year of its program. He said proponents of House Bill 1110 nevertheless try to hold up Oregon’s experience as “proof” that a low-carbon fuel standard won’t raise gas prices.

“... This ignores the fact that Oregon’s program is new and carbon intensity reductions to date have been very small,” Stokesbary wrote in an email. “This shouldn’t surprise anyone — in virtually any industry, businesses will make the cheapest, most efficient investments first.”

State Sen. Reuven Carlyle, a supporter of the clean-fuels bill, said those types of arguments don’t consider how fast clean-fuel technology is advancing and improving.

“They’re pretending the marketplace is frozen, paralyzed in the time of the Ice Age, yet we are in a hyperdrive digital era where we’re implanting cellphones in ear lobes,” said Carlyle, D-Seattle.

Carlyle discounted some of the estimates that suggest gas prices could rise as much as 30 or 40 cents per gallon over two decades.

“For them to take some wide-ranging, two-decade prediction and call that the increase assumes hardly a millimeter of market innovation,” Carlyle said. “You have companies and alternative fuel providers who are investing billions in research and development and the evolution of the market.”

House Bill 1110 is scheduled for a public hearing Tuesday in the Senate Committee on Environment, Energy and Technology, which Carlyle chairs. 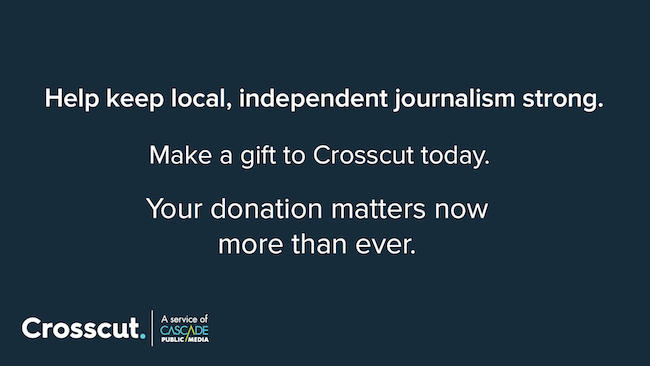 How Big Tech landed in the crosshairs of antitrust law

During the Reagan era, a permissive antitrust philosophy took root, setting the stage for the rise of Amazon, Apple, Facebook and Google.

What Biden's win means: The economy

Seattle’s plan to give walkers and riders safer streets started with a bang. Whether it remains depends on how loudly residents fight to keep them. 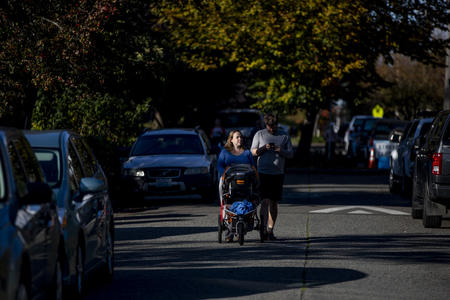 Seattle’s plan to give walkers and riders safer streets started with a bang. Whether it remains depends on how loudly residents fight to keep them.