If passed by the Legislature, a new law would help save small fish and, by way of the food chain, orcas. 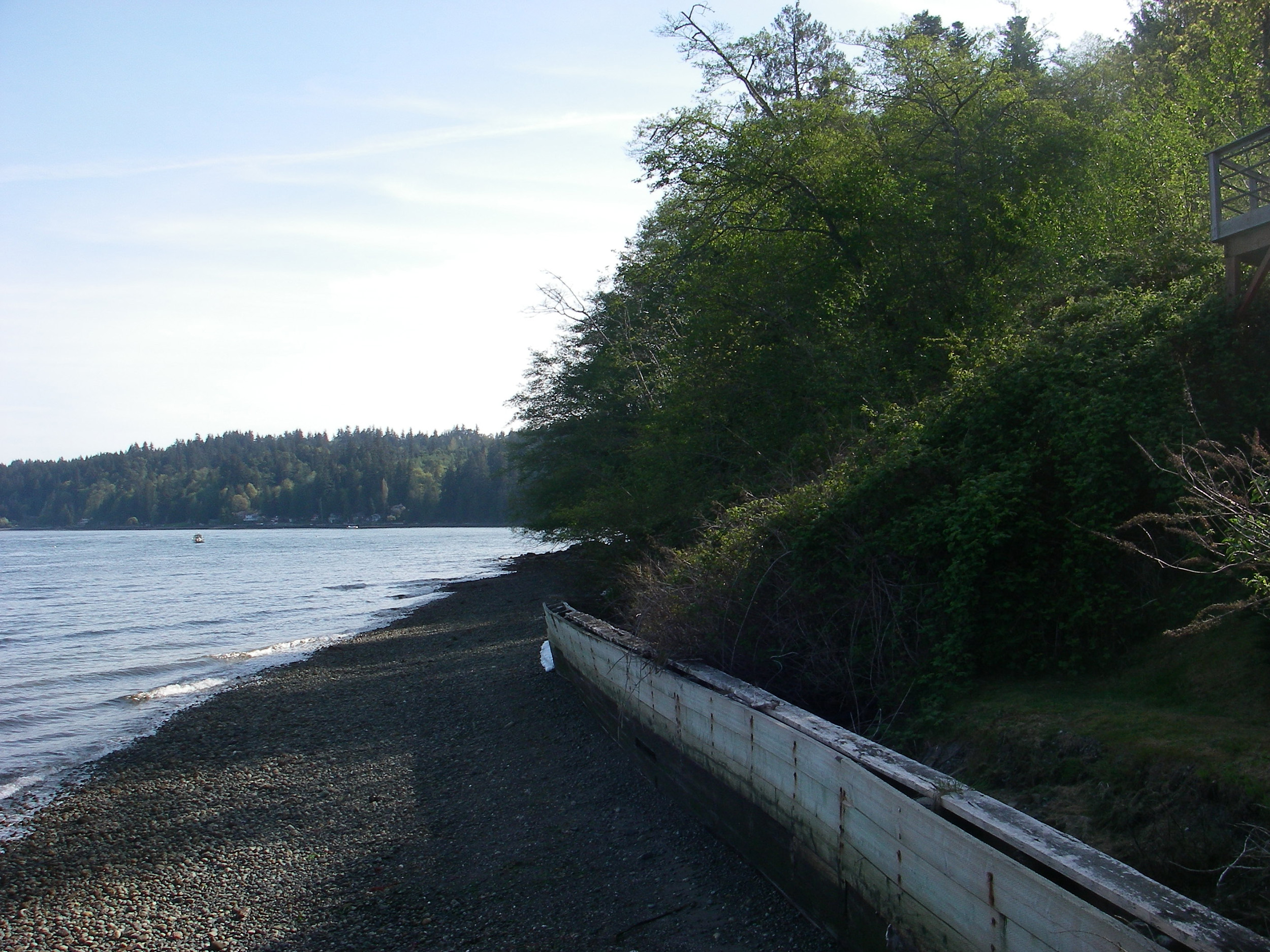 The owners of this Vashon Island property are under investigation by King County for armoring the beachfront by installing an unpermitted seawall made of rocks, logs and sandbags. The homemade seawall prevents sand from the bluff above from covering rocks along the shore and providing a place for fish to lay eggs. (Photo by King County Department of Natural Resources and Parks)

OLYMPIA – For years, state wildlife officials responsible for protecting the fish of Puget Sound have urged the Legislature to overhaul a 76-year-old law that is supposed to protect ecologically critical shorelines.

Now a renewed focus on the area’s diminishing orca population has provided proponents with their best chance ever of a winning new powers for the state Department of Fish and Wildlife to manage the building of structures along the state’s shorelines.

Of particular interest are seawalls, which can hold back sand that would otherwise cover rocky shores, providing small fish like surf smelt a place to lay eggs. Currently, hundreds of miles of Puget Sound shoreline have been ecologically compromised by these and other structures, reducing populations of small fish and taking a toll on a Puget Sound food chain that ends with resident orca whales.

The state House last month passed legislation that would provide the Fish and Wildlife agency with more effective tools to stop people and businesses from building seawalls, docks and other structures without the proper permits. The legislation now must pass the Senate, but is currently stuck in the Agriculture, Water, Natural Resources and Parks Committee, where chairman Kevin Van De Wege, D-Sequim, is hedging on whether he will join the other three Democrats on the panel to pass the legislation. It all comes to a head Tuesday at a meeting of the committee.

The legislation at issue would allow Fish and Wildlife officers to issue civil fines, much like a traffic ticket, but with penalties of up to $10,000 in particularly serious cases. Currently the maximum fine is $100 a day for however long construction lasts. It would also empower the fish cops, like their counterparts at the state Ecology and Natural Resources departments, to issue stop-work orders. And it would change the current system that basically guarantees any single-family property owner the right to put up a seawall, allowing Fish and Wildlife to reject permit applications from single-family waterfront homes.

The legislation is an effort to reverse a yearslong trend to armor ever-higher amounts of Puget Sound shoreline with seawalls. Scientists say this is contributing to a drop in populations of surf smelt, sand lance and other small fish.

The Fish and Wildlife Department, which employs the officers responsible for enforcing the state’s hydraulic code, has repeatedly spotlighted a lack of effective tools to deal with illegal shoreline building.

Currently, the officers must jawbone with offenders or — in severe cases with recalcitrant property owners — turn to local prosecutors to file misdemeanor criminal charges. Yet this is sometimes a hard sell for prosecutors with dockets full of DUIs, domestic assaults and other crimes. In those cases that are prosecuted, the maximum fine is $100 a day for however long construction lasts, and it can be difficult to get the offending dock, seawall or other construction removed.

The legislation currently being considered would allow Fish and Wildlife officers to issue civil fines, with maximum penalties of up to $10,000.

The legislation is supported by environmental advocates and Native American tribes.

This year, new momentum has come from Gov. Jay Inslee’s orca-recovery task force, which placed fixing illegal beach alterations as a high priority. Legislation to better empower Fish and Wildlife agents, as the task force suggested, has been proposed in the past, but the recent plight of the orcas has added urgency to the cause.

“At a minimum when they have cases that are egregious – over the top – they need to be able to use a stop-work order,'' says Amy Carey, executive director for Sound Action, an environmental advocacy group. “We need to give our resource agencies tools to be protecting habitat.''

But builders, business interests and even officials representing county governments argue that giving Fish and Wildlife officers more power is a bad idea. They say there is plenty of protection through county-level review of shoreline-protection plans mandated by the state.

Testifying to legislators recently, Paul Jewell of the Washington State Association of Counties said counties “continue to express frustration” because of varying interpretations by the state and counties about the so-called “hydraulic permit approvals,” or HPAs, necessary to build a dock or put up a seawall.

County governments themselves are required to obtain hydraulic permits for construction around the water, including work on bridges. “Some of our county engineers even report feeling as if applying for an HPA permit sometimes is like a negotiation rather than a predictable process that everyone understands,” Jewell told legislators.

Legislation to beef up Fish and Wildlife officers’ powers has never fared this well before. This year’s bill, House Bill 1579, passed the House 59-39.

Van De Wege, the senator who chairs the Agriculture, Water, Natural Resources and Parks Committee and who has long opposed giving Fish and Wildlife officers more power, said he is concerned that the agency’s actions can upend an individual property owner’s simple plans to add a dock or other project that may have already received a local government’s blessing.  Fish and Wildlife’s handling of these permits “is one of the reasons people really don’t like government. … They can sink your project after doing all the other stuff,’’ Van De Wege said.

Unless some form of the bill passes the committee by Wednesday, it is almost certainly dead because of deadlines before the legislative session ends April 28.

“I think that bill is on life support,” said Jeff Davis, a Fish and Wildlife Department assistant director who has advocated for a stronger enforcement tool. “…We’ll see what happens.’’

Its only hope may come in the form of a deal proposed by Van De Wege, who is asking that research projects along three rivers be added to the legislation.

While this may sound innocuous, tribes and environmental advocates are concerned that his proposed total rewrite of the bill would make “sustaining viable agriculture” a goal of the research projects, along with environmental improvements. Agriculture is the single biggest reason U.S. waterways violate the Clean Water Act.

One of the major arguments for passing the legislation is to halt the continued armoring of shorelines by seawalls. That messes with natural processes and reduces habitat needed by smaller fish, called forage fish. They are eaten by larger fish, such as salmon, which in turn feed the orcas.

Although some seawalls are being removed to help the fish, data kept by the Puget Sound Partnership, a state agency, shows that reductions in the amount of fortified shoreline are still outpaced by the increase in new beach seawalls.

And a shoreline survey completed in January by King County showed a similar trend: About 100 new projects along King County shorelines were constructed in recent years, collectively adding a bit more armoring than was removed from private property.

Adding in a couple of large public park projects, including one at Burien that put in less intrusive beach protections, the King County figures show a small net reduction in armoring.

The authority to issue stop-work orders and levy larger fines is seen by tribes, environmental advocates and others as far superior to the fish cops’ current tools.

The agency today can seek the $100 daily fines or ask a county prosecutor to file criminal misdemeanor charges. But there is little middle ground between criminal charges that are severe or fines that can be treated as the cost of doing business.

“As long as we’re relying on criminal enforcement, there’s really no enforcement,” Daryl Williams, a consultant for the Tulalip Tribes near Marysville and member of the State Conservation Commission, said during recent legislative testimony on proposals to change the Fish and Wildlife Department’s authority.

Because prosecutors don’t want to take time on environmental issues, Williams added, “the civil penalties would actually add deterrence to some of these things occurring.”

Fish and Wildlife approved 2,263 shoreline construction permits in 2018 and denied just four. Less than one in five cases were for marine waters. Only about 100 cases involved beach armoring.

By comparison, the agency’s enforcement officers made 2,097 contacts with property owners or contractors over the 30-month period from July 2016 through 2018, according to a recent presentation by agency staffers.

Of those, 1,650 were situations requiring shoreline construction permits, and these led to 366 cases where an incident report was filed. Another 146 cases led to verbal warnings.

But just 34 were referred for criminal sanctions.

Despite business interests’ fears of draconian actions by state enforcement officers, the bill says that Fish and Wildlife should first work with property owners to seek voluntary compliance and offer technical assistance, as it already does.

And the bill says any stop-work orders or large fines would have to be approved by high-ranking officials of the agency.

The original bill’s sponsor, Rep. Joe Fitzgibbon of D-Burien, also included a provision to let a landowner seek a prepermit review by Fish and Wildlife, a way to allow waterfront property owners to see if a hydraulic permit from the agency is even needed.

Those steps and Van De Wege’s effort to run a research program in Snohomish, Grays Harbor and Whatcom counties may be softening resistance to the bill.

Initially the Washington Farm Bureau opposed the bill (as well as its Senate counterpart, Senate Bill 5580). Tom Davis, director of government relations with the Farm Bureau, testified against early versions of the bill, expressing fears that Fish and Wildlife could impose crippling sanctions on farming near Eastern Washington waterways — far from the orca and salmon habitats being eyed for protection.

But the prepermit review option has helped diminish the farm group’s opposition. Davis told senators recently that his members remain concerned about who makes decisions on stop-work orders and the consistency of applying rules.

But Fitzgibbon says it is a matter of fairness to give Fish and Wildlife tools to make its hydraulic permit code enforceable. 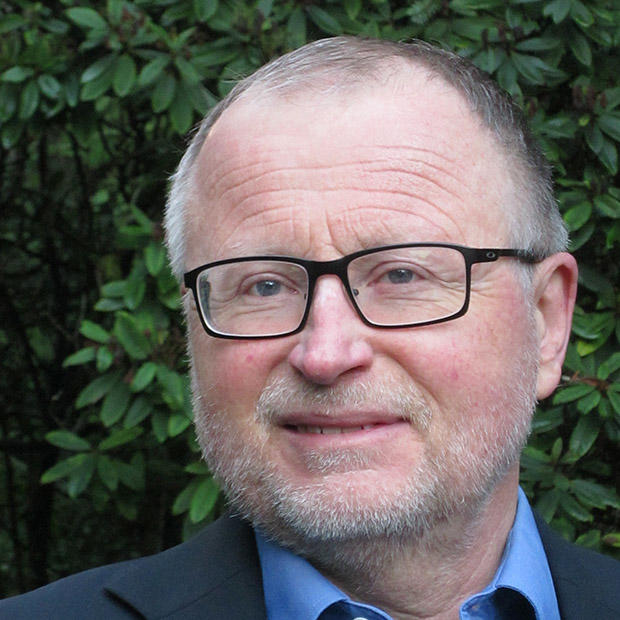 Brad Shannon is an Olympia-based independent journalist covering the 2019 legislative session for InvestigateWest.