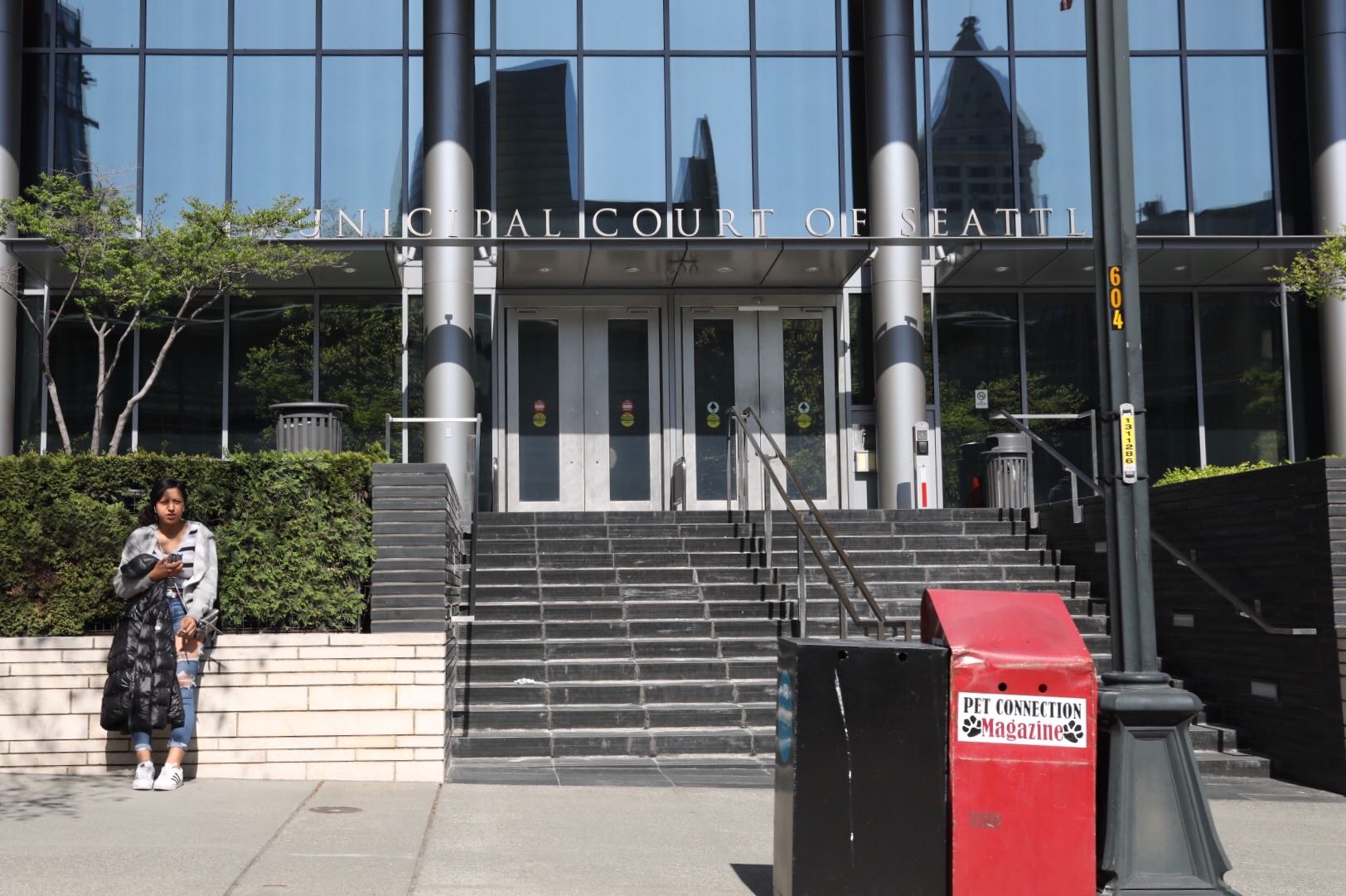 The entrance to the Seattle Municipal Court on Fifth Avenue on April 24, 2019. (Photo by Crosscut)

In an extraordinary show of unity between legal adversaries, Seattle City Attorney Pete Holmes and Anita Khandelwal, director of the Department of Public Defense, are calling into question the impartiality of Seattle Municipal Court Judge Ed McKenna, the top judge in the city’s court.

Holmes and Khandelwal, whose attorneys represent opposing parties in Seattle’s legal system, point to what they believe to be patterns of predetermining harsh outcomes for defendants and advertising the sentencings to local media.

The two are threatening to boycott meetings with McKenna outside of the courtroom unless he gives up his post as the court’s presiding judge, according to a spokesperson for the City Attorney’s Office.

In a joint letter sent to McKenna on Wednesday, Holmes and Khandelwal said the judge should recuse himself on criminal matters if he does not alter his behavior. They are not demanding McKenna leave the bench entirely.

“We request that you step aside as presiding judge so that your conduct does not further tarnish the reputations of your fellow Seattle Municipal Court judges, to whom these criticisms are not directed,” Holmes and Khandelwal said in the letter.

“The City Attorney and the Public Defender are adversaries in the courtroom and disagree on many matters of criminal justice policy; rarely do we stand together on issues,” Holmes and Khandelwal wrote later in the letter. “We do so today because of our shared concern that you are disregarding your duty to act with impartiality and integrity.”

In a response sent Thursday, Judge Mckenna said he would not step down as presiding judge and said he hopes the meetings continue.

McKenna also denied any improper conduct and, in fact, turned the response back on Holmes and Khandelwal. "May I also remind each of you of your ethical obligations to maintain the integrity of your profession," he wrote.

In their letter, the two top attorneys say McKenna is undermining the “public confidence in the impartiality of the judiciary” by predetermining harsh sentences that sometimes exceed recommendations and inviting certain media outlets in advance, namely KOMO-TV, to witness as he delivers those sentences.

They also point to a Downtown Seattle Association breakfast where McKenna reportedly said he felt “bound to follow prosecutors’ recommendations 99 percent of the time,” which Holmes and Khandelwal felt improperly disregarded defense counsel.

Crosscut obtained an audio recording of the event. His exact remarks were, "judges typically, 99% of the time, will follow the recommendation of the prosecutor. And we rely on the prosecutor because we expect [prosecutors] will make a reasonable recommendation based on the defendant's criminal history, the nature of the offense and the strengths and weaknesses of their case and so [judges] rarely exceed a prosecutor's recommendation in those cases."

Additionally, the letter states that McKenna has privately urged prosecutors with the City Attorney’s Office to recommend longer sentences so that McKenna can split the difference with the public defenders’ recommendations. “You have complained that you look like ‘the bad guy’ when you exercise judicial discretion by imposing a sentence above the City’s recommendation,” Holmes and Khandelwal wrote.

The attorneys point in particular to the case of Francisco Calderon, who was accused of punching a stranger on the streets.

Prosecuting and defense attorneys reached a plea agreement in the case for 50 days served, plus conditional mental health and drug treatment.

(A spokesperson from Speak Out Seattle said Coats is, in fact, a member of a different Facebook group, Safe Seattle, where she has previously posted about Judge McKenna. A spokesperson for the City Attorney's Office acknowledged Thursday that the office was confused between the two groups in the letter.

Holmes and Khandelwal stated that their attendance was strange. When Calderon did not appear at the hearing, Judge McKenna issued a “drag order,” forcing the transport of Calderon to the court hearing. He then handed down the maximum sentence — 364 days in jail, without treatment — far exceeding the joint recommendation.

Holmes and Khandelwal said “evidence suggests” that Markovich and Coats were invited to attend the hearing by McKenna, but did not detail the nature of that evidence.

“Your invitation to Ms. Coats and apparent invitation to Mr. Markovich suggests you decided the outcome in Mr. Calderon’s matter before sentencing — before the parties had an opportunity to present argument and before Mr. Calderon could address the court,” they wrote.

In an emailed statement, Markovich disputed the characterization. "At no point did Judge Ed McKenna invite us into his courtroom to cover the case of Francisco Caulderon... . I was told about this hearing through a non-court source and decided to pursue the case," he said. "We followed all the typical procedures to have a video news camera in a Seattle Municipal Courtroom. Both defense counsel and the deputy city attorney have the prerogative to deny our request to video the proceedings but neither side did."

McKenna also took issue with the facts of the letter. He denied making any improper statements at the downtown breakfast or that any invitation to his courtroom constituted improper conduct.

"With respect to any other allegations in your letter, the specifics are too vague for a detailed reply," he wrote.

In an interview Wednesday, Holmes said he made numerous private entreaties to McKenna before electing to send this letter. Sending the letter "was not fun," said Holmes. "But my conscience is clear that I went the extra nine yards to get him to see the error of his ways."

Khandelwal said in an interview that McKenna's behavior was not something she had seen before. "We don’t have confidence in him," she said. "We don’t believe he is the right person for the position."

McKenna was elected to the bench in November 2010 with a strong majority and Holmes' endorsement. Prior to that he spent more than two decades as a senior prosecutor in the Seattle City Attorney’s Office. He grew up in Seattle and earned his law degree from Seattle University.

McKenna is part way through a two-year term as presiding judge, put there by his colleagues. His extra duties are largely administrative, including overseeing the court's magistrates, allocating court resources, determining judicial assignments and issuing recommendations for improving the court’s functionality.

He also hosts “bench bar” meetings with both prosecutors and defense counsel to discuss technical proceedings in the court. It’s these meetings that the attorneys are threatening to boycott.

McKenna has been a particularly visible figure as the court’s presiding judge, often speaking to media outlets about repeat offenders. He also is well regarded among the Safe Seattle Facebook group, which advocates for a more forceful response to low-level crime.

As noted in the letter, the complaints against McKenna come as Seattle and King County are consumed by debate over how to handle street disorder. This comes on the heels of a report from a onetime challenger to Holmes, Scott Lindsay, on the city’s top 100 repeat offenders, as well as the broadcast of KOMO’s controversial “Seattle is Dying” piece on homelessness and drug addiction, to which Markovich contributed.

Following McKenna's Thursday response, Holmes and Khandelwal stood by their letter. "Judge McKenna’s response letter does not assuage the concerns we raised," they said.

Josh Cohen contributed to this report.

This story has been updated to include a statement from a spokesperson for Speak Out Seattle as well as a full response from Judge McKenna.