The UW program director will fill the council seat vacated by Rob Johnson for seven months. 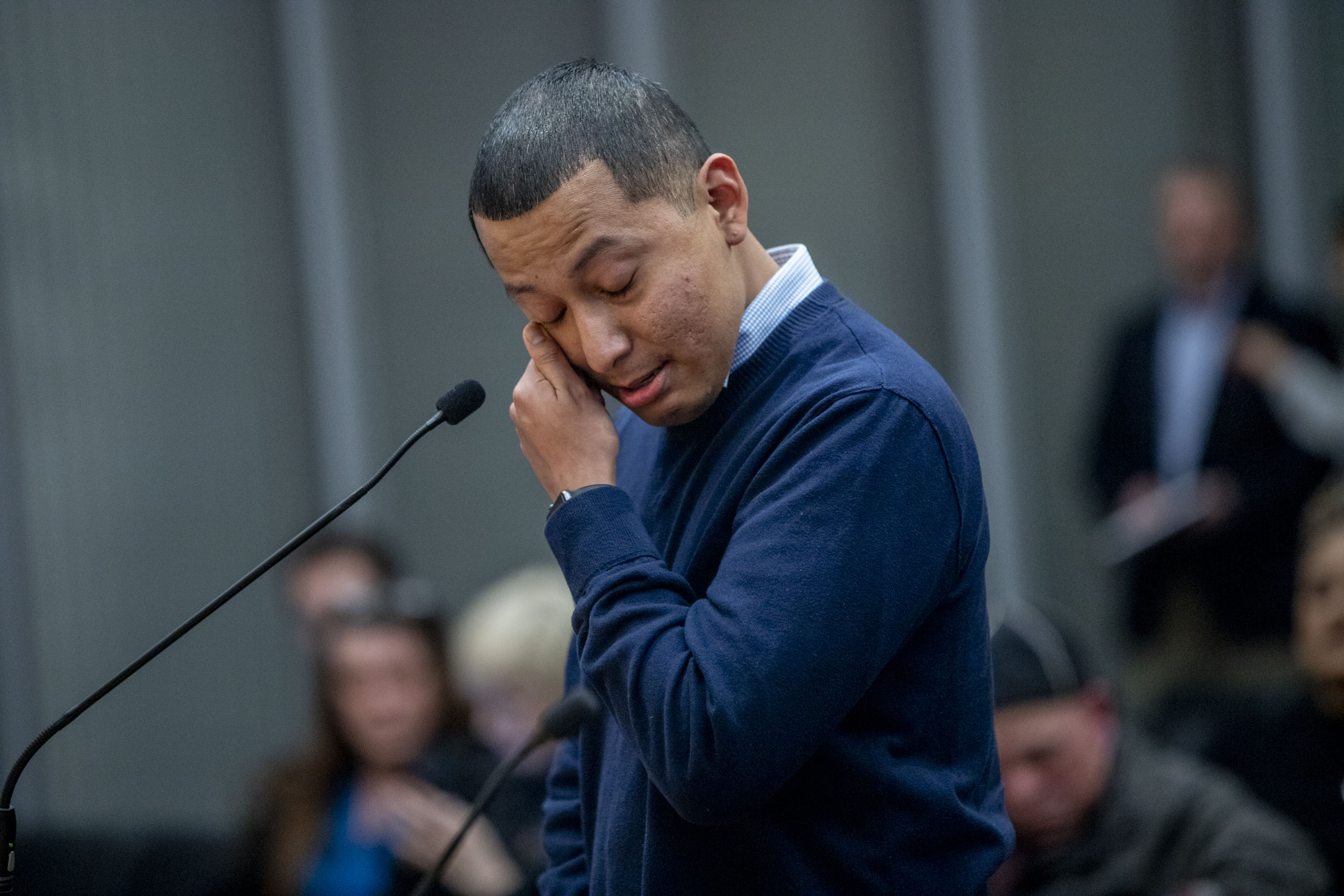 Abel Pacheco becomes emotional as he addresses council members after being sworn in to Seattle City Council on April 22, 2019. Pacheco was appointed to replace Rob Johnson in District 4 after he resigned. (Photo by Dorothy Edwards/Crosscut)

The Seattle City Council on Monday appointed Abel Pacheco Jr., a University of Washington Evans School graduate and advocate for mathematics, engineering and science achievement, to fill the seat left behind by Rob Johnson. After several rounds of voting, Pacheco eventually won votes from five of the eight sitting council members.

He will represent District 4, which snakes along the eastern part of Lake Union, to north of the ship canal and ends south of Lake City, encapsulating the University of Washington and its surrounding areas.

After winning the seat, an emotional Pacheco recalled promising his mother he’d make her proud. “Just like I told her, I hope to make all of you proud,” he told the council.

Pacheco, 31, will have seven months to make his mark on the council as chair of the Planning, Land Use & Zoning Committee, during which time he will lead the council’s discussion about what comes after its most recent landmark upzones. Specifically, his committee will grapple with how much density to allow around the Ave in the University District and next steps in the council’s drawn-out tinkering with the city’s backyard cottage rules.

Pacheco said he “tentatively” supports upzones around the Ave, but wanted to meet with businesses to “alleviate” concerns. He also said he supports easing restrictions on backyard cottages.

Perhaps his biggest responsibility will be to study and likely help amend Mayor Jenny Durkan’s proposed 2020 budget this fall. For the council, budget deliberation is an opportunity to bring home money for districts and pet projects, as well as to lay out the body’s broad priorities.

As someone who does not own a car, Pacheco also said he would focus on ways to improve transportation transit connections to the UW light rail station.

At 31, Pacheco becomes the council’s youngest member. After graduating UW in 2012 with a master's in public administration, he worked as a communications and programs specialist with the Seattle Police Foundation, an entity separate from the police department that raises money to offer resources to Seattle police officers.

Most recently, he worked as the director of strategic engagement with the University of Washington’s MESA program, lobbying the Washington state Legislature for funding to promote mathematics, engineering and science achievement for underserved populations.

Pacheco has also dipped his toe into land-use issues, serving on a Wallingford focus group for the city’s housing and livability agenda.

In advocating for himself, Pacheco also emphasized his story: a person of color who barely graduated high school and has overcome adversity. “While my resume highlights my community involvement and professional experiences that have prepared me to serve, it is my story that has fueled my heart’s desire to serve,” he said in his application.

This is not the first time Pacheco has sought a seat on the Seattle City Council. He ran in 2015, but failed to advance past the primary. He also sought to fill a vacancy left by Tim Burgess, who became acting mayor in 2017, but the seat was granted to Kirsten Harris-Talley. 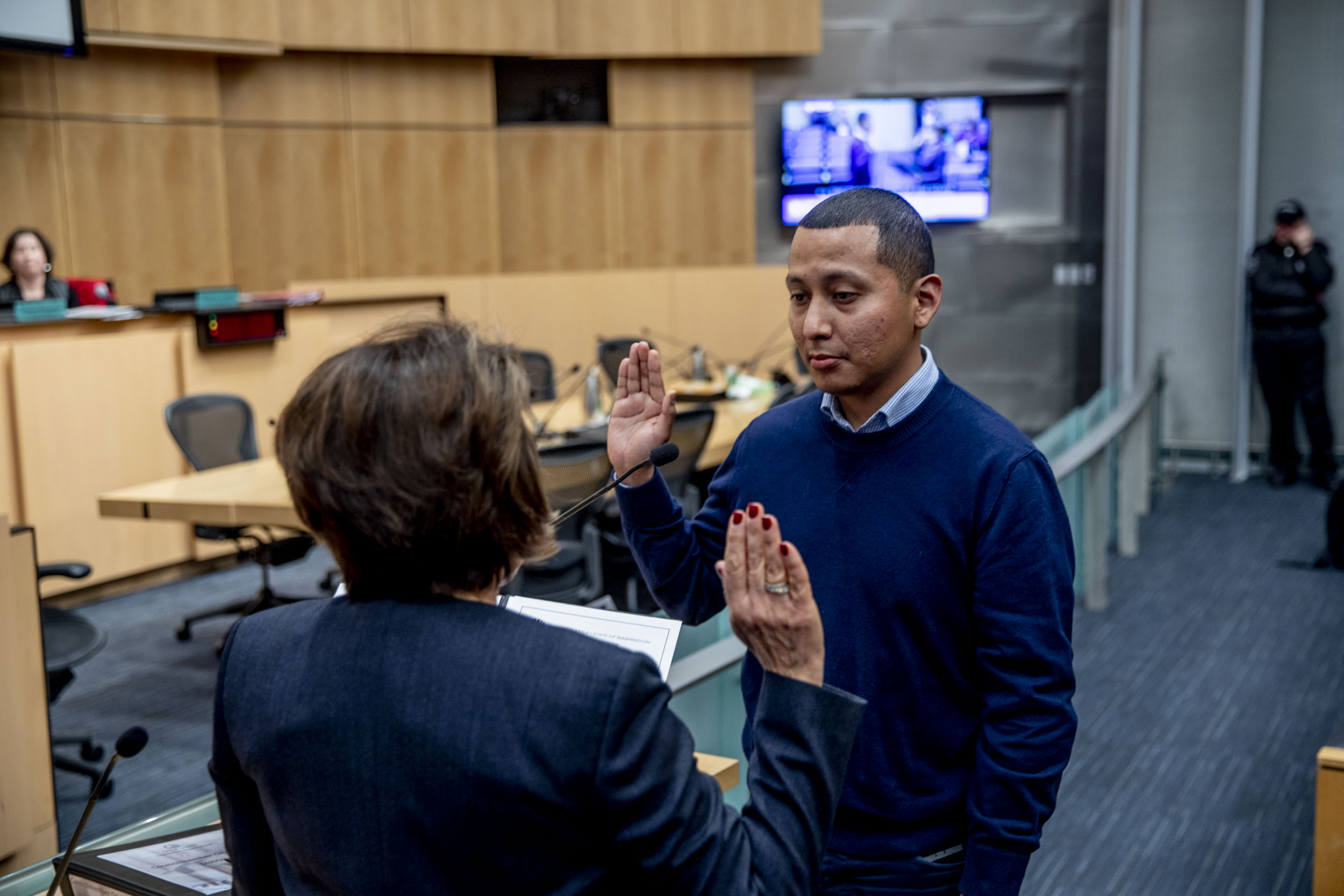 Abel Pacheco is sworn in to Seattle City Council on April 22, 2019. Pacheco was appointed to replace Rob Johnson in District 4, who resigned. (Photo by Dorothy Edwards/Crosscut)

Abel Pacheco is sworn in to Seattle City Council on April 22, 2019. Pacheco was appointed to replace Rob Johnson in District 4, who resigned. (Photo by Dorothy Edwards/Crosscut)

Following Councilmember Rob Johnson’s exit from the council to take a job with NHL Seattle, 11 applicants applied to fill his seat. On Monday, the council whittled it down to four.

Councilmember Juarez, who watched Pacheco's first campaign for council, spoke highly of him. “I don’t just know his stump speech; I know what he stands for and what he wants to do for District 4 and for the city of Seattle. … When you’ve come from a diverse background and you’ve come from adversity, it builds character. And those kinds of experiences … really frame and mold how you approach situations with courage,” Juarez said.

This seat has been tagged as a “caretaker” position. Council President Bruce Harrell said that whoever won the appointment should not seek election this fall. Though Pacheco is currently running for the permanent seat in District 4, he will likely to drop out.

Nonetheless, the “caretaker” label belies the position’s significance. One only needs to look to recent history to understand the enormous impact an appointee can have. In her time, Harris-Talley quickly became one of two sponsors of a tax on big businesses to fund homelessness and housing services, launching one of the most heated periods in recent council history.

Pacheco was immediately sworn in Monday. He said his first course of action would be to speak with central staff and staff for Johnson. “I think Councilmember Johnson was doing the best job that he could,” he said. “Now it’s just putting my own twist to what the district needs are.”