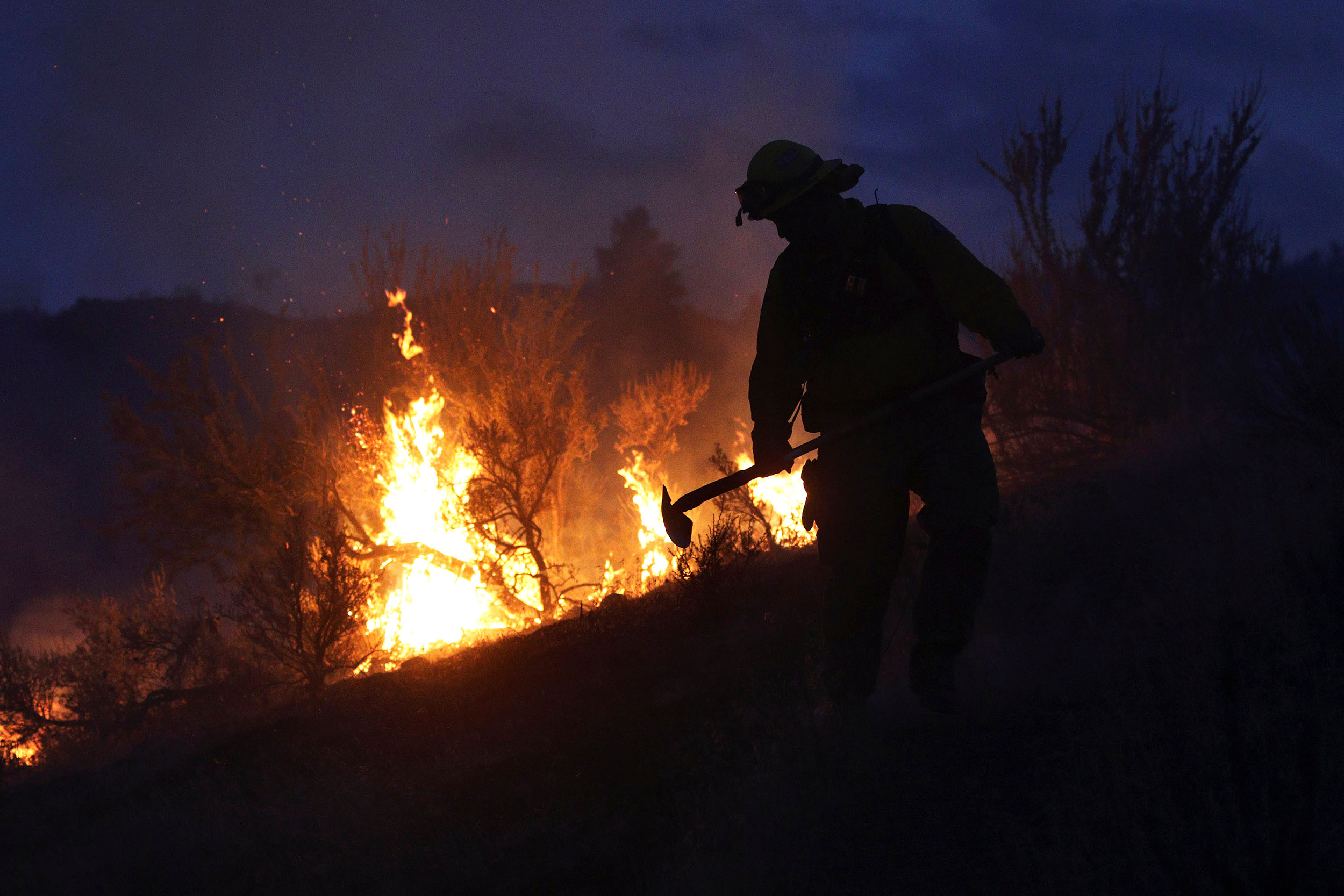 In this 2015 file photograph, Gold Bar Fire Lt. Scott Coulson investigates brushfires in the hills outside of Omak, Washington, as wildfires burned throughout the north-central region of Washington. (Photo by Genna Martin/The Herald via AP)

As wildfires raged across the Northwest last year, blanketing the Puget Sound in smoke, Washington state ran out of people to battle the flames. Nearby states — including Oregon, Idaho and California — were burning around the same time, leaving fewer firefighters available to help douse the record-setting number of fires in Washington.

So state leaders turned to a more distant source for help: Australia.

The state imported 45 firefighters from Australia to help fight fires in 2018, according to the state Department of Natural Resources (DNR).

But state officials don’t think they should have to go to such lengths in the future. Hilary Franz, the state’s commissioner of public lands, says Washington must take steps to both build up the state’s ability to fight fires locally and thin Washington’s overgrown forests, so flames are less likely to spread.

It’s a refrain Washington lawmakers have heard before, including from Franz’ predecessor, Peter Goldmark: Pay more upfront to prevent fires and catch them when they’re small, and save money later on fighting out-of-control blazes.

This time, however, Franz and others are proposing a new, dedicated source of funding to pay for those preparations and investments — something she says would revolutionize how the state approaches its increasingly severe wildfire seasons. Longer and more destructive fire seasons are becoming common not just because of drier weather and warming temperatures, she said, but also because of the unhealthy condition of Washington’s forests.

Under the plan Franz is championing, the state would increase the tax on certain insurance premiums to pay for wildfire suppression, prevention and forest health projects. Those efforts would include tree thinning and prescribed burns designed to clear out brush and diseased trees that are more likely to catch fire.

The proposal would raise the tax on premiums for property and casualty insurance, which include policies that protect people's homes and cars. The rate increase, from 2 percent to 2.52 percent, would generate an estimated $62.5 million per year.

That money would be enough to nearly double the state’s full-time firefighting staff, Franz said, as well as pay for a plan to restore 1.25 million acres of unhealthy forests over the next 20 years. Her office estimated that the tax increase would cost the average household less than $2 extra per month.

The idea has a fair amount of support, including from Democratic leaders in the state Senate, who have included it in their proposed two-year budget.

But insurance companies are opposing the plan, saying it’s unfair to shift the cost of maintaining public lands onto insurers and their customers.

“It is a new and large tax increase specifically on property and casualty insurance policies, the cost of which would ultimately be paid by consumers,” said Kenton Brine, the president of the NW Insurance Council. “Fighting wildfires is a societal cost. Why are we singling out property and casualty insurance companies and our customers to pay those costs differently than we have done before?”

Supporters of the plan say increasing taxes on those policies makes sense, since the goal is to help protect people's cars, homes and other property, while reducing insurance payouts after fires hit. Brine said too many other types of policies would be affected, including liability insurance and medical malpractice insurance.

The current DNR plan is different from past proposals in that it would create a separate fund for wildfire prevention and firefighting. Right now, efforts to fight fires — as well as to prevent them — compete for limited dollars in the state’s general fund and capital budget. Franz said that system has contributed to the state spending extra millions to fight fires after they get out of control, instead of spending money upfront to prevent fires from spreading in the first place.

“If we could get it through, then wildfire funding would not be a debate in the years to come,” said state Sen. Christine Rolfes, D-Bainbridge Island, the Senate budget writer. “We would have a solid investment in the suppression and prevention parts.”

Over the past five years, fire agencies across the state had to spend an average of about $154 million annually putting out wildfires, which included many hours of overtime, according to DNR.

Meanwhile, the state has budgeted far less for forest health projects and supporting a standing, well-trained firefighting force from the outset. Right now, the state spends about $27 million per year to hire a firefighting force and maintain seasonal firefighting equipment, with private landowners and the federal government paying most of the bill. That funding supports only 43 full-time firefighters at DNR, despite the department being the state’s largest wildland firefighting agency.

When it comes to managing lands and making them less likely to burn, lawmakers last year approved $13 million for forest health treatments, such as thinning operations. Yet that money will pay for the state to treat only about 30,000 acres statewide over two years, less than a quarter of the acreage DNR says it needs to treat per two-year budget cycle to reach its 20-year goal.

State Rep. June Robinson, one of the House budget negotiators, said it is true that some proposals aimed at preventing wildfires haven’t gotten fully funded in recent years, despite arguments about how those efforts could save the state money in the long run. A 2012 report out of Oregon, for instance, found that every $1 spent on forest health projects potentially avoids $1.45 in fire suppression costs.

“There are just so many pressures on that funding,” said Robinson, D-Everett. “We have had huge pressures on K-12 [education] funding, we have all the pressures around health-care services for people with developmental disabilities, as well as mental health.”

As a result, wildfire prevention funding proposals “have in recent years certainly not risen to the top,” she said.

House Democratic leaders didn’t include Franz’s wildfire funding plan in their proposed two-year budget, but Robinson said they’re watching the proposal closely, and will consider it, should it pass the Senate.

Brine, the president of the insurers council, said his group worries the tax proposal could make Washington-based insurance companies less competitive. That's because when Washington insurance companies write policies in other states, they have to pay either their home state's premium tax rate, or the tax rate in the state where they're doing business — whichever is higher.

Right now, 17 states tax premiums at a lower rate than Washington does, according to the insurers council. If Franz’s proposal took effect, Washington would charge a higher rate than 36 other states.

“It poses a disadvantage to Washington-based companies,” Brine said. “Why would we do that?”

State Sen. John Braun, R-Centralia, said he thinks state lawmakers should be sensitive to those concerns. At the same time, he thinks any potential increases to consumers’ homeowners and car insurance premiums would be modest, and probably not a major burden for policyholders.

He said DNR’s plan for improving the health of the state’s forests is a good one, though he thinks Franz’ tax proposal might raise more money than necessary to pay for it all.

“I actually really appreciate the work that DNR did,” said Braun, the Senate Republicans’ leader on budget issues. He said he wants to wants to keep discussing the proposal, while seeing "if it can be done without damaging our economy.”

Franz said she is confident the state’s economy — from tourism to the timber industry — will benefit from keeping wildfires and smoky summers in check.

She thinks the fact that wildfires are no longer affecting only the east side of the state, but also Western Washington and the Seattle area, will help build consensus this year around a long-term plan. In a single week in March, more than 50 fires started west of the Cascades — an unusual occurrence for a region known for its rain.

Whatever strategy lawmakers settle on for combating wildfires, the issue will likely come to a head sometime this month. The Legislature’s current 105-day session is scheduled to end April 28.