The City says “a sad miscommunication” landed the historic Mercer Arena griffins in a dumpster. 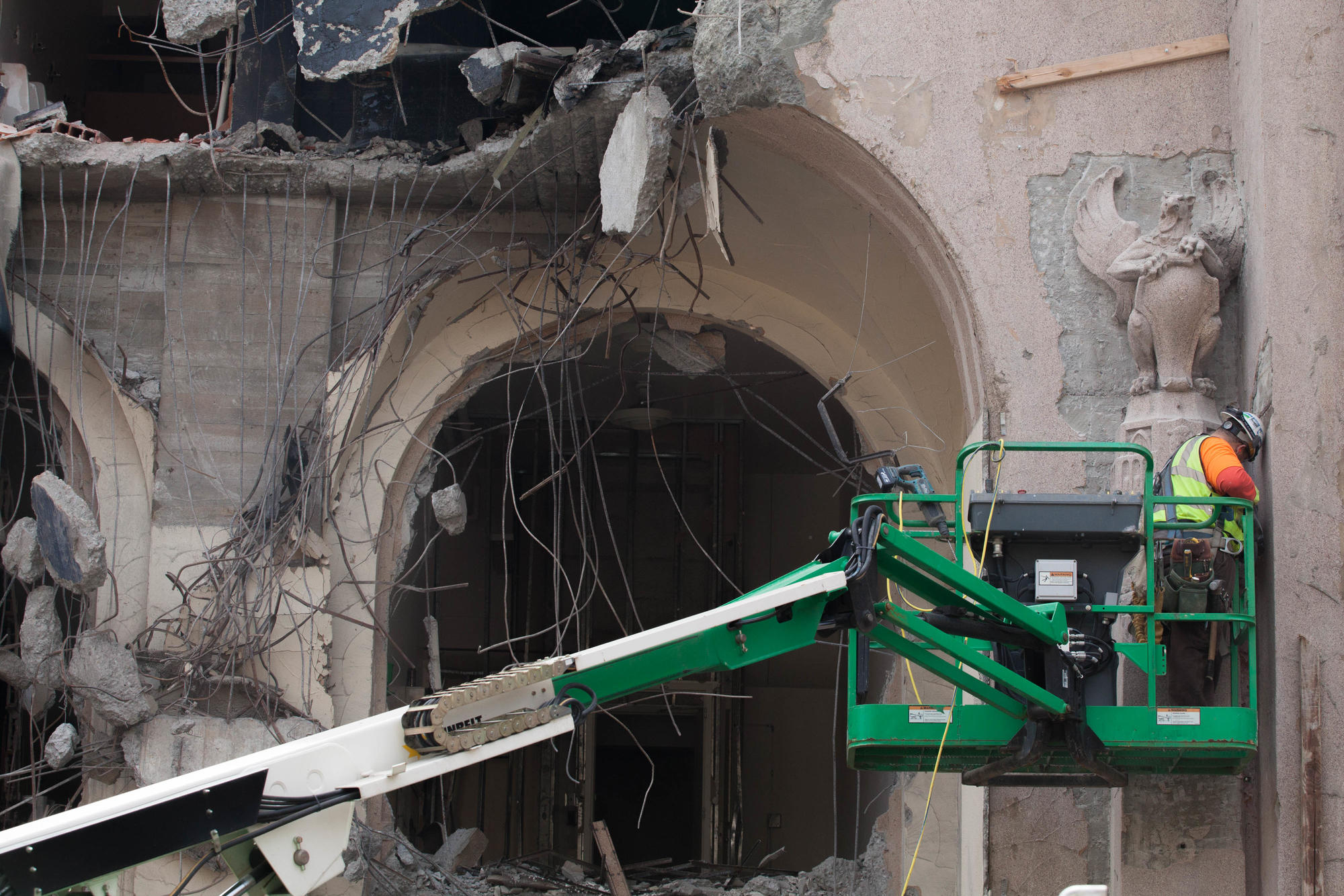 A demolition worker at Mercer Arena on the Seattle Center campus readies one of the surviving gargoyles for safe removal and restoration on March 31, 2017. Last month the gargoyles were accidentally taken to a dumpster. (Photo by Matt M. McKnight/Crosscut)

For two years, a pair of gargoyles lay on their winged backs in a service alley behind Memorial Stadium. I discovered them there last fall, on my lunch break, while taking a shortcut across Seattle Center.

I recognized the concrete figures, about 3 feet tall and molded in the shape of mythical griffins, as those that had been saved — just barely — from the Mercer Arena demolition in 2017.

They weren’t looking particularly saved when I encountered them. The gargoyles had been placed on pallets in the alley along the backside of the stadium, amid other demolition debris, dumpsters and rat traps. One had a broken wing. Construction trucks and maintenance carts trundled by them daily. Workers left trash on top of the black mesh fabric covering the griffins — a half-finished Mountain Dew bottle one day, an empty Diet Coke the next.

Their original home was significantly more elevated. The gargoyles (which are technically “grotesques,” as true gargoyles function as rain spouts) made their premiere in 1928, with the grand opening of the Mercer Arena in Lower Queen Anne. Then called the Civic Ice Arena, the busy venue hosted hockey games, public skating and ice shows. The building was designed in stately Romanesque Revival style, with beetle-backed shields, decoratively twisted trim, three arched doorways spanning the entry and four griffin gargoyles perched on columns in between.

Half-eagle, half-lion, the griffins demanded respect. In Greco-Roman myth, the creatures symbolized wisdom and power, dominion over earth and sky. Legend has it a griffin pulled the chariot of sun god Apollo. But in more earthly duties, griffins have long been employed as gargoyles, to guard regal buildings and the treasures within.

With eagle eyes narrowed, heads slightly tilted, mouths curled down at the corners under their beaks, the gargoyles at the Civic Ice Arena appeared somewhat vexed, as if they knew the indignities they would suffer in the coming decades.

The first insult: entombment. In 1962, the arena received an extreme makeover — a new facade to better fit the mod vibe of Seattle World’s Fair architecture. Romanesque flourish gave way to minimalism, as the old-fashioned entry was replaced with a featureless, beige, rectilinear wall.

In the mad grab at the future, the gargoyles were forgotten.

The arena, meanwhile, continued to serve the public with concerts, high school graduations and Seattle Reign women’s basketball games. It was renamed the Mercer Arena, and then the Mercer Arts Arena (to distinguish it from its higher profile neighbor, KeyArena). But as other, newer venues became available, the space fell out of favor. After a brief stint as a temporary host for Seattle Opera and Pacific Northwest Ballet, by the early 2000s its doors had closed permanently to the public.

No one seemed to miss it much until a few years ago, when Seattle Center revealed plans to demolish the Mercer Arena and replace it with a new Seattle Opera facility. On social media, people reminisced about the rock shows and graduations they had attended there — for certain Seattle generations the building still held memories of youthful thrills. But there was no widespread protest, and an architectural review committee determined there was no historic reason to keep the building, as it had been significantly altered during the World’s Fair.

On demolition day in March, 2017, it was unclear how much of the 1928 structure was still intact within the 1962 upgrade. Northwest historian Feliks Banel reported that neither Seattle Opera, Seattle Center nor preservation experts were sure if any original ornamentation remained. The historical details were simply lost. But as soon as excavators began to dig, the gargoyles reappeared. Suddenly exposed, the four griffins were still clutching shields to their bellies, muscular lion legs ready to pounce.

They didn’t pounce fast enough. As reported by Banel, who was at the demolition, two of the gargoyles were crushed by the machinery before construction was paused to salvage the others.

The remaining gargoyles were carefully cut from the 1928 façade, for future restoration.

I was captivated by the rescue of the gargoyles, the discovery of which seemed like something out of Indiana Jones. I felt strangely sorry for them, buried in a building for more than five decades, as Bumbershoot, Folklife, ballet and opera crowds passed by, unaware.

And I was eager to see where the rescued griffins would end up. Perhaps an honored spot inside the Seattle Opera’s new headquarters? Or a prominent pathway on Seattle Center grounds? I thought they deserved to be returned to a proud stance among the people.

The opera’s construction project took place across the street from the Crosscut offices, and last fall, the sidewalk along Mercer was frequently blocked off with orange barricades. That’s when I started taking my lunchtime shortcut through the covered alley behind Memorial Stadium. I noticed the stacks of bricks and assorted construction rubble, and the two piles covered in black netting that stood out from the rest. When I looked closer I realized: these were the salvaged gargoyles, flat on their backs, next to their pedestals.

Early in November, I emailed Seattle Opera. “The gargoyles are no longer in our possession,” the media relations department responded. “They were donated to The City of Seattle and Seattle Center.” At that point, the gargoyles had been languishing in the alley for more than a year.

Deborah Daoust, director of communications at Seattle Center, said by phone that she thought the griffins were in the warehouse, awaiting restoration. When I told her I’d seen them behind Memorial Stadium, she said she would check with the redevelopment department. She added that the griffins were “outdoor creatures,” built to withstand all kinds of weather. Fair point.

Daoust then emailed with an unattributed note from redevelopment (using an alternate spelling of griffin): “We are temporarily storing the gryphons next to our warehouse and still trying to find the permanent location for these gryphons in our campus. With the Arena project, skatepark relocation, facility staff move and nearing completion of the Opera Center, our staff has been stretched to say the least. Relocating the figures will likely be a 2019 project.”

For whatever reason — an interest in historic preservation or a tendency toward anthropomorphic attachment — I felt a responsibility toward the gargoyles. I continued taking my shortcut just to walk past them. I watched for signs of crumbling. I worried that someone might steal them — a challenge, given their weight, but they seemed vulnerable to anyone seeking an unusual, antique yard ornament.

Soon the calendar flipped to 2019. On the last Friday in March, I saw a man driving a Seattle Center maintenance cart, the back of which was loaded with familiar bricks. I approached him.

“Are you moving the gargoyles?” I asked. I quickly scanned the alley.

“Those are already gone,” he said.

“Gone … to the warehouse? To get restored?” I asked.

He looked stricken. He shook his head. “No, gone, gone. I’m sorry,” he said sincerely, and drove away.

I walked down the alley. I climbed up and peered into the dumpsters. The area was cleared except for the rat traps. Another maintenance person drove up. I asked if he knew where the gargoyles went, and he said he’d heard they had been thrown away. He said it was a shame and that if no one wanted them he would’ve taken them home.

With a pit in my stomach, I called Seattle Center and left a message with Daoust, asking about the griffins’ current whereabouts. Maybe the grounds crew didn’t know the whole story, I hoped. For 24 hours, as I waited for confirmation, the gargoyles were merely MIA. They’d been rescued once before, perhaps some Greek god would spare them again.

But by the end of the day, Daoust confirmed the gargoyles’ fate. Turned out they had already been gone for about a week, unbeknownst to the Seattle Center team. “This was a very sad miscommunication, or lack of communication,” Daoust said, with audible dismay. She explained that with the Seattle Opera project fully completed, and the contractors packed up and gone, it was time to clean up the construction site.

It’s definitely a loss, because it tells a story — about how the city was transformed by the World’s Fair, about the history of the opera house.”
— Eugenia Woo

The maintenance team did not know the gargoyles were to be saved — they had not been marked as exempt. So the griffins were deposited in a dumpster with the rest of the rubble.

“They were waiting until this project was complete,” Daoust said over the phone. “The idea was to take stock and find a home for them.” She said the redevelopment team “was crushed to get the news.” They weren’t the only ones.

“I am angry about the whole episode and the careless and cavalier way the gargoyles were treated,” said Knute Berger, when I told him they were gone. “To save them from the rubble only to dump them is outrageous — careless in the extreme. This never should have happened.”

I felt terrible too — guilty that I hadn’t done more to ensure the gargoyles’ survival, and upset by another example of the city’s past slipping away.

I called Eugenia Woo, director of preservation services at Historic Seattle, to get some perspective: does a loss of ornamental artifacts matter, in the larger scheme?

“It’s definitely a loss, because it tells a story — about how the city was transformed by the World’s Fair, about the history of the opera house,” she said. “That building had an interesting story, and the gargoyles are the only physical things that remain to tell it.”

Woo said it reminded her of the 1960s demolition of Penn Street Station in New York City, which sparked the historic preservation movement in the U.S. The image that stuck with her from that event was a photograph by Eddie Hausner: a draped female sculpture that had once adorned the entrance and ended up among other detritus in a New Jersey landfill.

Calls to the dumpster company and to local transfer stations (“Have you seen any gargoyles come through?”) have not been returned. Last week, Daoust said Seattle Center “will be reaching out to the disposal company” as well.

Barring a miracle at the dump, the saga of the Mercer Arena griffins serves as an object lesson — one that speaks to all the civic history that gets walled up, torn down, or tossed out in Seattle’s rush toward the new.

Where are the gargoyles now? Suffering their final insult, facedown in a landfill of castoffs? Probably. But I prefer to hold a different image in mind, one captured on video during the initial salvage effort. For a magical moment, a winged beast, suspended from a crane, actually takes flight. Released from the mortar that held it in place for 91 years, the gargoyle spins in slow circles above the debris. It seems to enjoy the weightlessness, the lift of surrounding air. 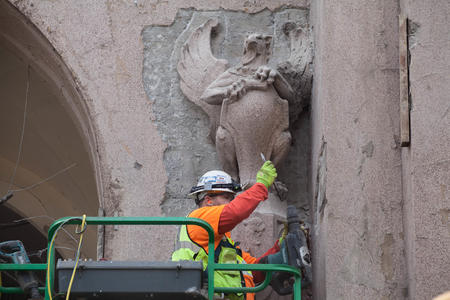 The measure from Councilmember Mosqueda would likely raise over $200 million annually from top-earning companies.