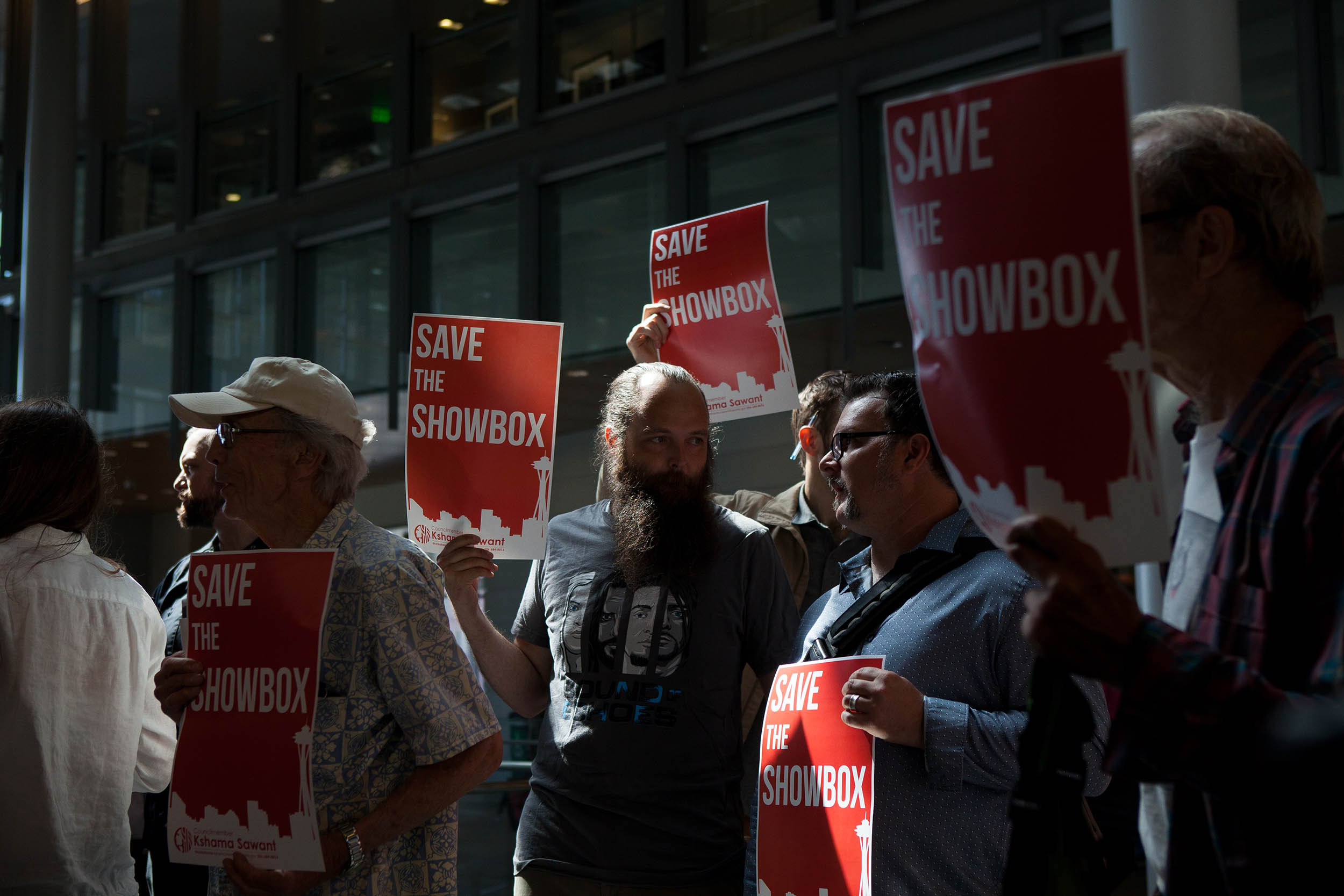 Demonstrators hold “Save the Showbox” posters at a rally hosted by Councilmember Kshama Sawant at Seattle City Hall on Aug. 1, 2018 to protest proposed development at the site of the music venue. (Photo by Jovelle Tamayo for Crosscut)

With a legal fight looming and time running out on Seattle’s temporary reprieve for the Showbox music venue, city officials and the building’s owner are nearing a temporary legal detente so the city can buy itself at least six more months to “Save the Showbox.”

While documents have yet to be filed in court, the city and attorneys for the building’s owner, Roger Forbes, are working toward a stay on the litigation Forbes brought against the city last September, Seattle Councilmember Lisa Herbold confirmed to Crosscut Thursday. The stay would mean all matters related to the ongoing litigation, including depositions and discovery, would halt, at least temporarily.

Herbold said attorneys for Forbes approached the city with the idea and that she’s hopeful the legal stay will be filed within the coming weeks. Forbes’ attorneys did not respond to multiple requests for comment.

With legal proceedings paused, the city would then likely pass a six-month extension to its original 10-month preservation of the Showbox. With the additional time, the two parties would pursue alternatives to redeveloping the 80-year-old theater in downtown Seattle into a 440-foot residential tower.

A legal pause would “give us some time to sit down with the building owner to see if there are alternatives we can all agree to, to see if there’s a path to long-term preservation — not just the building, but the use,” Herbold said.

Among the options: finding a buyer for the building. Enticing one of Seattle’s rich musicians or music lovers to purchase the space would likely be the most legally tenable — and expensive — path for Showbox enthusiasts to see the preservation of not just the space, but its use as an entertainment venue. 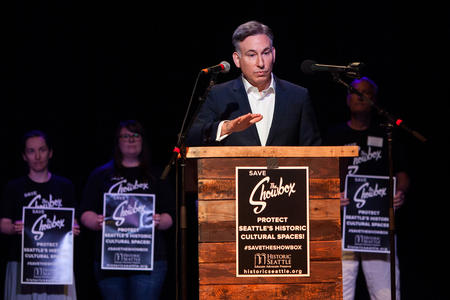 Herbold said that the city council and the building's owner will explore several options, including whether the city could acquire a ground lease on the property.

Herbold said she’s optimistic that the city and the owner can come to a settlement agreement in the coming months to avoid court. She praised what she called “politics of the imagination, politics of what’s possible.”

News broke of the Showbox’s pending redevelopment last July, when the Onni Group of British Columbia proposed a 44-story residential building on the space where the venue now stands. The news set into motion a frantic sprint by the city’s music community and several members of the Seattle City Council, including Herbold and Kshama Sawant, to find ways to preserve both the building itself and its use as a venue. The fight attracted unlikely faces to City Hall, including Death Cab for Cutie frontman Ben Gibbard.

But options for preserving the space were limited. Winning landmark status for the space is far from a protection — such a designation can be overcome if it’s shown to create too much financial burden for the owner. And while landmark status may slow redevelopment of the facade or the interior space, it cannot mandate how a building is used.

The city’s fix last August was to temporarily gerrymander the boundaries of the Pike Place Market Historical District to include the Showbox. Even minor changes to buildings within the district’s borders are subject to intense scrutiny. The district’s expansion, which was seen by many as a zoning change on a single property, was set for 10 months — or this June.

However, the move by the council quickly brought a lawsuit from Forbes, who argued, among other things, that it was an illegal zoning change and an improper “taking” of private property. He sought over $40 million in lost profit.

A judge tossed much of Forbes’ lawsuit last year, but allowed his claims against the city’s zoning changes to move forward. The suit claims the changes are quasi-judicial, which would mean elected officials are supposed to remain neutral. Councilmember Sawant, however, turned conversations around the changes into rallies, printing her signature red signs in support of the Showbox.

If the city could find a buyer for the building, rather than leaning on a permanent expansion of the historic district, as is proposed in the council’s work plan, it would likely mean the fight would avoid the courtroom.

Parallel to the behind-the-scenes negotiation is a forthcoming study of the legality and surrounding impact of a permanent expansion of the Pike Place Historical District to include the Showbox. The city agreed last year to spend $100,000 on a consultant to perform the work. According to a work agreement, first reported by Erica Barnett earlier this year, the final report is due in May. A spokesperson from the Department of Neighborhoods, which is overseeing the report, did not return a request for comment on its status.

On the mayor’s and council’s original timeline, the city was scheduled to pass the permanent expansion by July, which is now looking increasingly unlikely.