The mayor is calling the stalled confirmation process "deeply unfair." City Councilmember Teresa Mosqueda counters that the council is just doing its job. 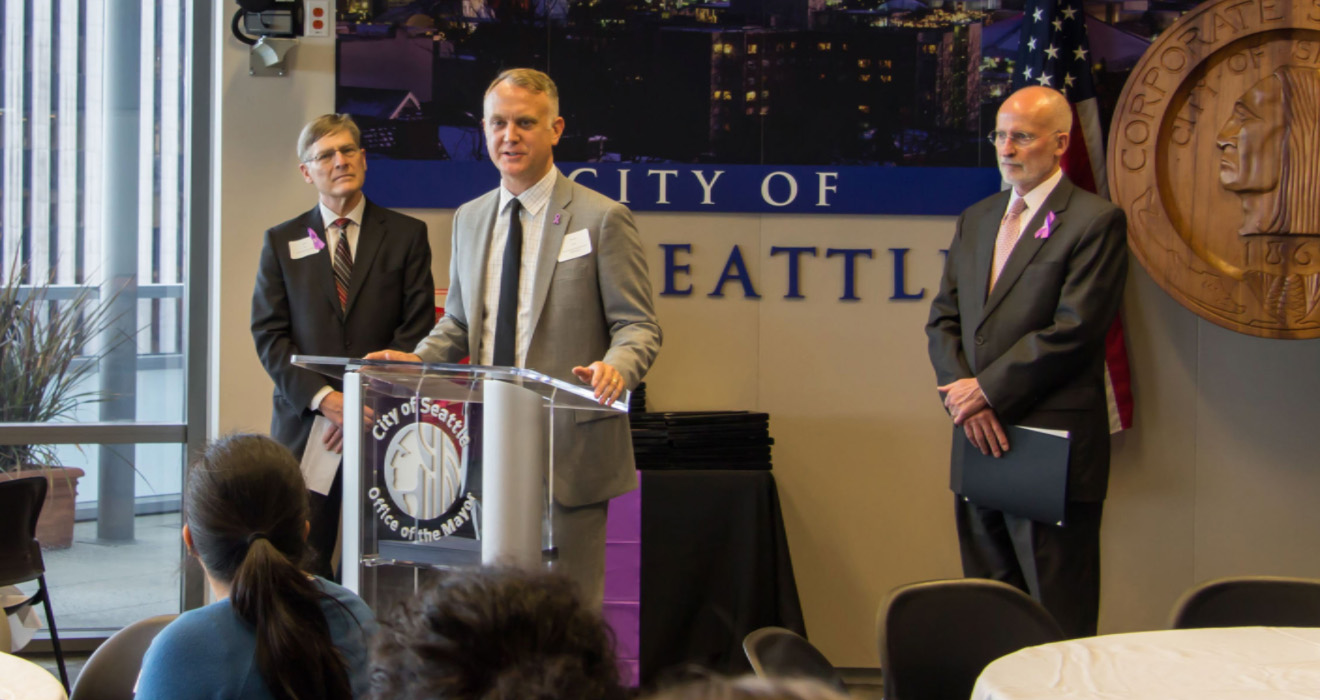 Jason Johnson, at the podium here alongside City Attorney Pete Holmes and then-acting mayor Tim Burgess, was elevated to the position of interim director of the Human Services Department following the resignation of Catherine Lester last year. (Photo courtesy of the City of Seattle)

The relationship between the mayor’s office and the Seattle City Council reached a boiling point Monday after Seattle Mayor Jenny Durkan’s pick to lead the Human Services Department (HSD) withdrew his nomination.

Late last year, Durkan put forward Jason Johnson, currently the acting director of HSD, to be the department’s permanent head. He currently oversees the city’s response to the homelessness crisis, the number one issue on Seattle voters’ minds, according to numerous polls.

But opposition to the process by which Johnson was nominated resulted in a monthslong standoff between the separate branches of city government, led in large part by Councilmember Kshama Sawant. As the chair of the Human Services, Equitable Development & Renter Rights Committee, Sawant refused to bring Johnson’s nomination to a vote, citing opposition she had heard from some employees in the department. At one point, Sawant even accused the mayor of retaliating against members of the controversial SHARE/WHEEL shelter organization for opposing Johnson.

The headwinds grew stronger as other council members joined Sawant, in part the result of dissatisfaction with the nominee’s answers related to race and equity. Johnson is white and would have been the first LGBTQ leader of HSD.

“We’re talking about serving folks with better services around aging and disability services, serving those who’ve experienced domestic violence, making sure people feel safe in raising concerns, especially among women and people of color and the LGBTQ community,” said Councilmember Teresa Mosqueda. “We need a clear recommendation from folks, especially in those communities, that they’ve been heard and I didn’t hear that.”

In an apparent acknowledgment that Johnson’s nomination would continue to languish, Durkan said in a statement Monday that she and Johnson came to a mutual decision that he would withdraw. The second-year mayor excoriated the council for its role in the decision, launching by far the most forceful confrontation between the second and seventh floors of City Hall.

“The Council’s failure to follow its own procedures or give Jason a fair confirmation process has been harmful to the work of the Human Services Department, impaired our effort to respond to the homelessness crisis and has been deeply unfair to a person that has served this city tirelessly on one of the toughest issues facing our city, region and country,” Durkan said in the statement. “It is little wonder that many good people won’t consider public service.”

“After 112 days and no clear path forward to even a vote, this never-ending confirmation ‘process’ needs to end,” she added.

Mosqueda said the council was doing exactly what it should be doing. “It is absolutely our job to ask about people’s experience in making sure their voices are being heard and that their concerns in the workplace are being addressed,” she said.

Johnson will nevertheless continue to serve through 2020 as acting director, a mayor’s office spokesperson said. That means he will eventually have served unconfirmed for well over two years, a very unusual length of stay for an interim director. The mayor’s staff did not offer a timeline or steps for finding a new nominee.

Monday’s dramatic exchange between the mayor and the council is more than a year in the making. The department’s last permanent director, Catherine Lester, announced she was resigning in March 2018. She left last May, with Johnson becoming the interim director upon her departure.

Rather than launch a search process, as she did to determine director nominees for the Department of Transportation, Seattle City Light and Seattle Police Department, Durkan opted to elevate Johnson, the second-in-command and interim director, to take the top job. This is not atypical — Durkan and past mayors have routinely named directors without an open search process and without controversy.

But the backlash indicates how impassioned the debate over homelessness has become.

Gretchen Waschke, an HSD employee and union steward, told Crosscut earlier this year that internal opposition to Johnson was less about the man and more about the process.

“For the majority of people it really is about the process,” she said. “It is genuinely a concern that there was no call for resumes, no call for potential applicants, there was nothing. It has completely contradicted the mayor’s statements about what the city’s core values are.”

At the same time, employees have complained about feeling unrecognized and out of the loop, independent journalist Erica Barnett reported last month.

Additionally, Johnson faced disapproval from an unlikely mix of voices, including members of neighborhood groups concerned about public safety and street disorder and representatives from Nickelsville villages who oppose the city’s reprioritization away from emergency shelter.

But Durkan and the department’s public-facing officials have countered that those opponents to Johnson are not the majority and that he enjoys broad support from service providers and others.

“Jason has the support of many, including a range of organizations and people who have worked with him in serving our most vulnerable people,” Durkan said. “Yet Council never gave a chance for these voices to be heard.”

A spokesperson for Durkan provided a set of more than 50 emails in support of Johnson. "Jason is an exemplary leader committed to the efficient, culturally relevant and compassionate delivery of human services to those in our city whose needs exceed their resources," said Gordon A. McHenry, Jr., President & CEO of Solid Ground.

Johnson has held leadership roles in the department amid a swirl of activity, as the city tries to better address the increasing homelessness population.

The city and county are working to create a new agency to better coordinate the two governmental bodies’ responses to homelessness.

The city also has put a greater emphasis on 24-hour shelters and tied funding to moving people into permanent housing. It’s a transition that city officials say is necessary to create more accountability and better results in the system, but that has frustrated some service providers who believe it incentivizes providers to avoid taking on the most complicated cases.

The city and county are expecting the results of the annual point-in-time count of people staying on the streets or in shelters. The numbers, which hold an outsized influence in measuring the region’s progress on homelessness, are expected to be released in the coming weeks.