I helped get affirmative action banned in WA. Here's what I think of the plan to bring it back 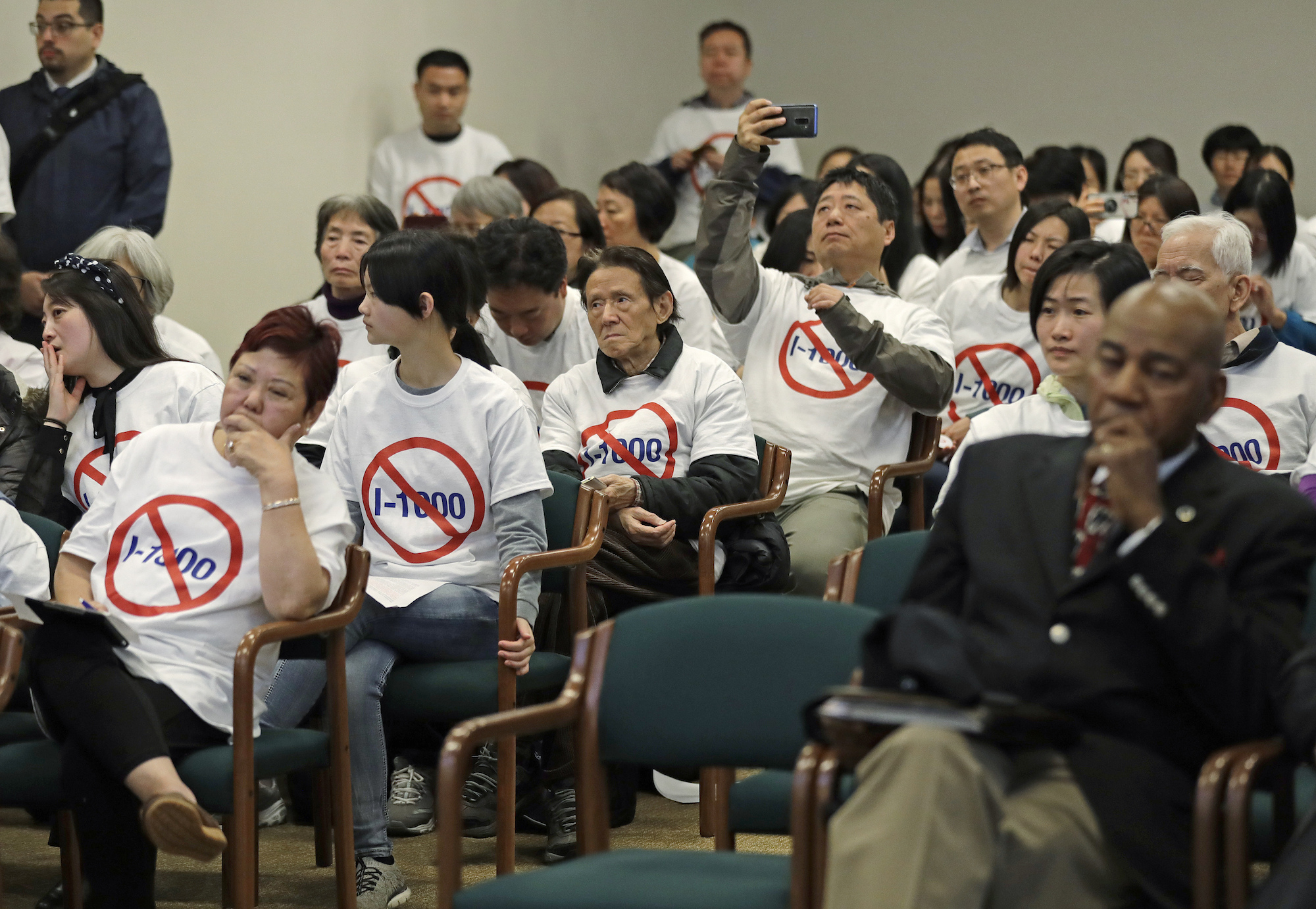 People opposed to Initiative 1000 wear t-shirts as they sit in the audience of a joint Washington state House and Senate committee, Thursday, April 18, 2019, at the Capitol in Olympia, Wash. Initiative 1000 would allow the state government to use affirmative action policies that do not constitute preferential treatment to remedy discrimination in public employment, education and contracting. (Photo Ted S. Warren/AP)

Sometime between now and Sunday, Washington’s Democrat-controlled legislature will decide whether to vote on Initiative 1000 to “restore Affirmative Action,” as The Seattle Times put it, or to create “Diversity, Equity and Inclusion,” as initiative supporters put it. If they don’t vote on it (that is, if they don’t have the votes), then it goes to a vote of the people. But if they do vote for it, then it will still likely face a vote of the people because opponents have vowed to file a referendum to put it on the November ballot.

The initiative itself can be explained in a single sentence: I-1000 would abolish the standard of equality under the law, regardless of race, as required by I-200 (an initiative I led in 1998), and replace it with a system that uses different rules for people of different races in public employment and education.

If a high school student applies to a state college or university, her race could be used as a factor in deciding whether she can be admitted.

If a small business owner applies for a government contract, his race could be used as a factor in the selection process.

If someone applies for a government job at the city, state or county, race could be an employment factor.

That, of course, is not what the supporters of I-1000 are saying. Gov. Jay Inslee says that the initiative “embraces the parts of the 20-year-old I-200 initiative that work well while recognizing what we can do better to address the challenges facing businesses, workers and students today.”

Simple. I-1000 changes the definition of so-called “preferential treatment.” Currently, under the standard established by I-200, someone is receiving “preferential treatment” if they get an artificial advantage (such as points added to their entrance exams or application) because of race. But under I-1000, there is no preferential treatment unless race is the “sole” reason someone is selected over someone else for a job or college admission (see Part II, Section 3, subsection 11, line D of the initiative).

When Washington decided I-200 in 1998, it was the most discussed and debated issue in years, maybe ever — and I was right in the middle of it. At times, particularly in Seattle, the issue got heated, and sometimes ugly. My co-chair was a gracious and caring African American woman named Mary Radcliffe, who never said an unkind word about anyone. But there were plenty of people saying unkind things about her, almost always race-tinged, including phone calls asking if she had a white husband.

Ward Connerly, the African American regent from the University of California bravely stepped forward in the mid-’90s to object to race-based preferences there, which ignited a national movement. When he and I appeared at a CityClub luncheon to debate I-200 opponents, several civil rights activists in the audience put napkins on their heads when he spoke, accusing him of being a “hanky head.”

In Seattle the debate often melted down into hysteria. I remember clearly a University of Washington law professor saying I-200 would ban government funding of mammograms for women (I still have no idea what he was talking about), and it was routine for opponents to say the initiative “abolished” affirmative action.

When the initiative passed, the city government actually bought bus boards to assure people that I-200 didn’t abolish civil rights entirely, addressing a concern that existed only because of the frenzied tone of some initiative supporters.

On election night everyone expected a close race. It was a good night for Democrats. In fact, it marked Jay Inslee’s return to Congress. When the first returns showed I-200 up nearly 18 points, most people assumed the count was coming from pockets of Eastern Washington. But the 9 p.m. returns (back then returns came in once, sometimes twice, an hour), it was still up by 18. And again at 10 p.m.

So confused were the media by their expectations versus actual results that it took hours before they announced I-200 as winning, even as congressional races that were far closer had long since been called.

By election’s end, I-200 triumphed by almost 17 percentage points. A Seattle Times exit poll had it winning 80 percent of the Republican vote, about 62 percent of the Independent vote and even 41 percent of the Democratic vote, despite the ardent opposition of every corner of the party’s establishment.

A rematch in November won’t likely be as pitched, partly because we have two decades of experience with I-200, and the sky didn’t fall after all. In fact, every state college campus in Washington is more diverse today than it was then. It’s true that some racial groups have done better than others — and women have done better than men — but as far as I can tell no racial group has a smaller proportion today than in 1998. When The Seattle Times wrote an editorial endorsing I-1000, it attracted 167 posts on its comment thread, 164 opposingd the editorial and/or the initiative. (The Times, since I last checked, has pulled its comment threads from all stories published before April 17, when it adopted a new public comment policy.)

A second reason is that the leading opposition to affirmative action preferences today is coming from Asian Americans, not only here, but across the country, including Harvard and New York City. And this opposition is relentless.

For instance, on April 19 the Legislature convened a joint hearing on I-1000 in the O’Brien House Office Building. The hearing began at 8 a.m. The doors opened a half-hour earlier. There were dozens of Asians, most belonging to the group Washington Asians for Equality waiting to get in at 5 a.m. Over 300 members of Washington Asians for Equality packed both the hearing room and the overflow hearing room behind it, on a weekday morning.

They surmised, correctly, that it is impossible to bring race into play in college admissions without discriminating against Asian students. To use an expression favored by people on the left, they are “woke.” And they are not going away. For those who live in a world where civil rights are simple and apply to everyone, (which is what the original civil rights movement — as we popularly understand it — was all about) this is exactly what you would expect when people believe that their government is imperiling their rights rather than protecting them.