A century ago, Seattle's hockey team was the best in the world. But it was no match for the Spanish flu, or plans for a downtown parking garage.

You’ve heard of the Boys on the Boat—the 1936 UW crew that won the gold medal at the 1936 Olympics in Berlin. But there is another set of young Seattle sports heroes from Seattle in the early 20th century, the Boys on the Ice.

In 1915, Seattle was bustling with new high-rises, a booming resource economy and shipyards. The population had grown by nearly 200 percent between 1900 and 1910. Over the next 10 years, the city would add  another 30 percent to pass 300,000 residents. And the city leaders were determined to get some big league entertainment for those residents.

They built a $100,000, 4,000-seat state-of-the-art ice arena downtown across from the Olympic Hotel. And in 1915, the city got a professional hockey team who dressed in green, white and red-striped “barber pole” jerseys.

They were called the Seattle Metropolitans and they played in the Pacific Coast Hockey Association. A young former boxer named Pete Muldoon was picked as coach, and he was not unlike another coach of our era named Pete: he sought players who were young, fast, athletic, smart and driven. Most hockey players were from Canada, so the core of the team was imported from Toronto.

The Pacific Northwest was still geographically isolated and the local rivalries were fierce. Seattle would play teams in Portland, Vancouver, Victoria and, later, Spokane, all fighting for the PCHA title and the opportunity to play an eastern Canadian champion for the prestigious Stanley Cup.

The Metropolitans’ first season was a bit of a disappointment — they were good, but not good enough. The Portland Rosebuds would go on to play for the Stanley Cup and lose.

But in its second season, after a rough start and with a very tough rival in the Vancouver Millionaires, the 1916-17 team battled injuries but came on strong and won the league championship behind the play of stars like Bernie Morris, a prolific scorer; Cully Wilson, a tough-as-nails goalie; and Frank Foyston, the league’s MVP and the team’s heart.

They then played in the Stanley Cup finals against a big bruising team from Montreal, the Canadiens. The Mets won the cup on their home Seattle ice by taking three of four games in a best-of-five series. Seattle had its first world champion team, and America its first Stanley Cup winner.

The team emerged during an era of growth, but over the course of nine seasons skated into an era of challenges. The great blizzard of 1916 delayed games, in 1919 there was labor strife with the Seattle General Strike, and when the Metropolitans went back to the championship game in 1919 to compete for the cup, the title series was canceled because of the great Spanish flu pandemic, which killed millions of people across the world. The Mets were playing the Canadiens again in a tied series, but five Montreal players were hospitalized with influenza and one died. The Mets competed again for the cup in 1920, but lost to Ottawa.

The rise of the Mets also coincided with World War I — an event that impacted all aspects of life across the continent, including hockey. Victoria’s ice rink was commandeered for the war effort, and U.S. and Canadian players were drafted or volunteered for the military. Within weeks of winning the cup, the U.S. officially entered the war. Seattle found its sports groove, but the world was struggling mightily.

The Metropolitans were a welcome distraction for local fans and continued to compete in the playoffs into the early 1920s, but their league was effectively disbanded when teams reorganized, some moved east, and the economy slumped. The championship ice arena was turned into a parking garage and Seattle reverted to a town without a bigtime pro team. Memories of the Metropolitans faded. Most of the major players had died by the mid-1960s, many long before.

Now with the National Hockey League on the city’s horizon, we’re remembering the Mets again. Seattle has lost other pro teams in the meantime — the NBA SuperSonics and baseball’s Pilots. For fans of big league sports the Mets’ absence has been a major missing link for more than a century. Now they are getting new interest in a new century.

Note: A fascinating new book on the history of the Metropolitans and their Stanley Cup season, When It Mattered Most, by Kevin Ticen (Clyde Hill Publishing, 2019), was published in April and was of great help in preparing this story. 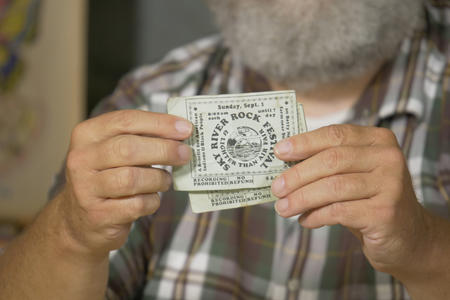 Before Woodstock, there was this Northwest music festival

Mossback attended the Sky River Rock Festival when he was 14 — and he still has the tickets to prove it.

Before Woodstock, there was this Northwest music festival

Mossback attended the Sky River Rock Festival when he was 14 — and he still has the tickets to prove it.