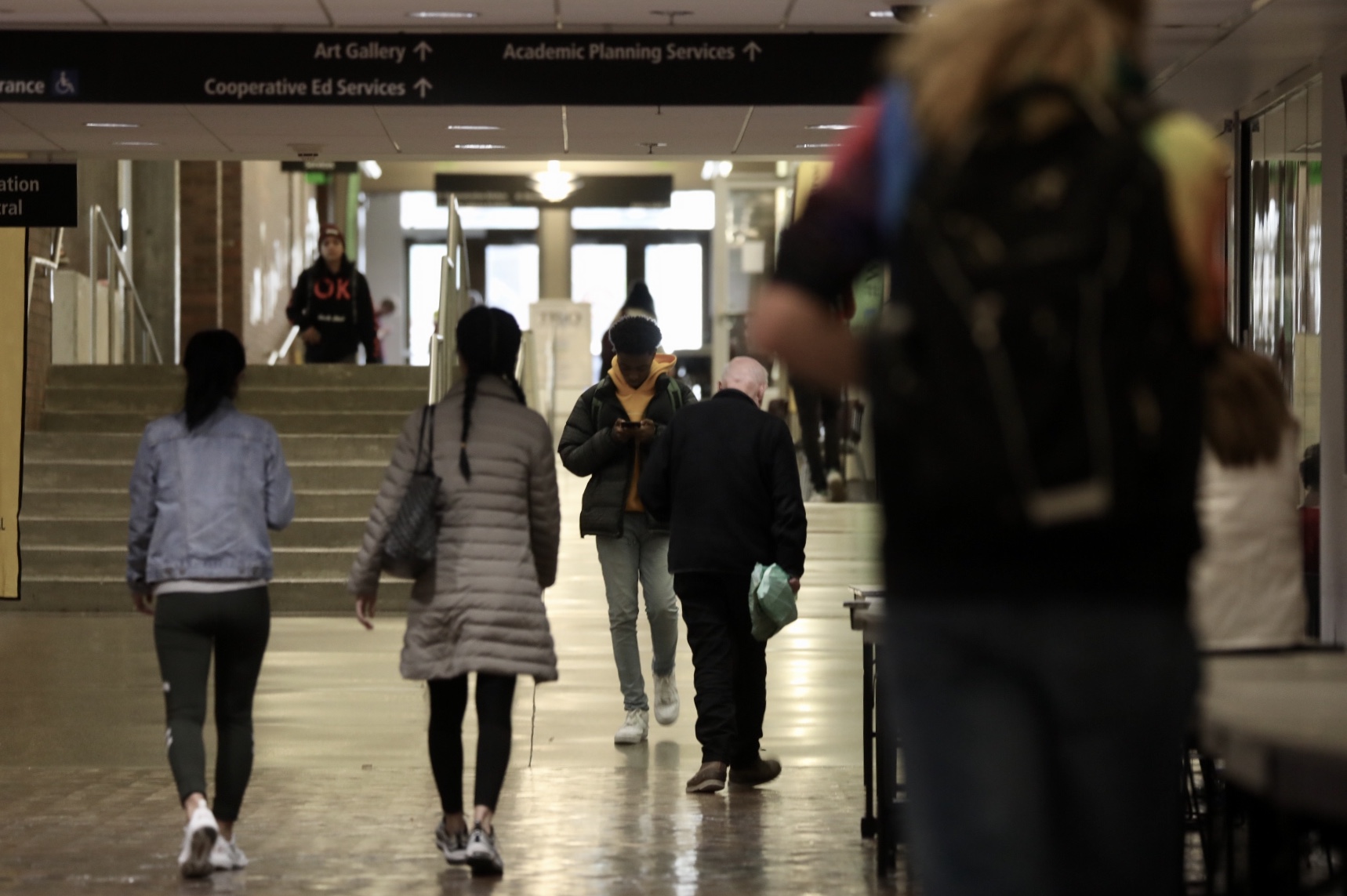 No one knows how long the graffiti had been there.

While Seattle Central College students were preoccupied with winter quarter finals, an unidentified vandal left some cryptic, racist graffiti in a stairway. Campus security discovered it March 21 after a student reported it to administration. A report was then filed with the Seattle Police Department.

The Seattle Police Department's initial assessment was that the vandalism did not rise to the level of a hate crime.

That did not sit well with the college president, Sheila Edwards Lange. In a campuswide email blast sent April 11, she condemned the act while also calling on SPD to change its classification. She described how the vandal had used a black marker to draw several bodies hanging from ropes, accompanied by the words, “damn your strange fruit” — a reference to singer Billie Holiday’s 1939 song “Strange Fruit,” the lyrics to which illustrate the horror of Black people being lynched in the American South.

In an image of the graffiti shared with Crosscut, a list of names also appears above the words  “who will be next?,” along with unintelligible phrases. The graffiti has since been painted over, and Crosscut has decided not to publish the image because of its graphic nature.

“Hate has no place here on this campus,” Edwards Lange said in an interview with Crosscut. A native of Meridian, Miss, she went on to recount how two of her great uncles were forced to flee their homes during the Jim Crow era under the threat of lynching.

Within days of Lange’s email, SPD reclassified the incident as a hate crime, an action first reported by Capitol Hill Seattle Blog.

In Washington state, an incident must target a member of a protected class — including those based on a person’s race, gender, religion or sexual orientation — in order to be classified as a hate crime. Seattle municipal law affords additional protections based on one’s gender identity, homelessness status, age and political ideology, among other factors.

“In this case, we learned that this had not been classified as a bias or hate crime, but it has since been looked into by the [SPD] bias crime coordinator,” Whitcomb said, adding that Edwards Lange’s letter had some influence over the decision to reclassify the investigation. “This is very important to us and we take this very seriously. Ensuring that this incident is investigated as a hate crime is the right thing to do.”

Hate crimes in Seattle have nearly doubled since 2016, according to the FBI’s most recent data, published in 2018. Most of the hate crimes were based on race and ethnicity, with more than half of those instances targeting Black people.

In addition to reporting its numbers to the FBI, SPD’s Bias Crime Unit maintains a public dashboard with hate crime data. The dashboard outlines bias incidents that may fall into one of three categories — the most extreme being malicious harassment, which encompasses any type of assault, property damage or verbal harassment that harms or threatens a person based on a perceived characteristic that is protected.

A crime with bias elements, another type of bias classification in Seattle, is one that was not committed on the basis of targeting a protected class, but which ultimately included biased actions or speech. The third category, noncriminal bias incidents, involves cases in which hate speech may have occurred but which ultimately didn’t rise to the level of a crime.

Edwards Lange said the SPD’s decision to investigate the matter as a possible hate crime has put her at some ease.

“These things must be documented and counted so we have an adequate view of how prevalent they are in our community,” she said. “It provides evidence to counter the narrative that we live in a post-racial society.” As Seattle’s first two-year college, Seattle Central College has seen a diverse population of students walk through its doors for more than 50 years. Currently, Black students make up 20 percent of the student body. Nine out of the college’s 11 presidents have been Black men and women, including Edwards Lange, who came into her position as president in 2015.

“Seattle Central has been sort of a beacon of social justice and equity since the very beginning,” Edwards Lange said. “And so this is the place where people in this city come together to right injustices in the community. So many of the protests around injustice start or end here at our campus.”

Edwards Lange, along with Valerie Hunt, Seattle Central’s associate vice president for equity, diversity and inclusion, described other incidents in which swastikas and flyers attempting to recruit students to a white nationalist group were found around campus in recent years. Though such upsetting incidents have been notable, administrators say they are rare. In the case of the most recent vandalism, Seattle Central facilities staff didn’t get around to covering the graffiti until two weeks after it was reported. This was likely the result of an oversight amid spring break-induced bustle, according to a campus spokesperson. The stairway where the vandalism occurred is not within the range of security cameras but school officials are determining whether or not to add additional cameras in that vicinity, a step that could potentially put students and faculty at ease.

“We let students know that they have access to a counseling center and resources on campus that they can access if they are feeling anxiety or fearful,” Edwards Lange said, adding that those resources were particularly helpful for undocumented students amid the Trump administration’s campaign to repeal the Deferred Action for Childhood Arrivals program in 2017.

Darron Lewis, a second-year sociology major and president of Seattle Central’s Black Student Union, said that although he was disheartened to learn about the graffiti, he wasn’t surprised.

“Racism and statements like that put in public places are as American as baseball and taxes," he said. "It's very unfortunate that this happened. I want people to realize that other people reclaiming their power is not an attack on them."