There are Prince fans who know every lyric of his songs, fans with Prince tattoos, fans with a penchant for purple blazers. And then there is Troy Gua.

Since 2011, the Seattle artist has been translating his lifelong love of the music giant into a tiny, artful homage: a hand-crafted Prince doll that he sculpts, outfits and photographs in miniature scenarios inspired by the singer’s storied career.

Called Le Petit Prince (with a wink to Antoine de Saint-Exupéry’s classic tale, The Little Prince), Gua’s painstakingly crafted portrait series is currently on view as part of MoPOP’s new Prince from Minneapolis exhibit, and also at Seattle Art Museum’s Taste Cafe. But the images featured in these local shows represent only a small fraction of his body of work. Gua, 48, has created hundreds of Le Petit Prince (LPP) portraits, and posts one every week on Instagram with the hashtag #LPPSaturday.

Unlike his idol, who was 5 feet, 2 inches, Gua is tall, made even taller by his upward swoosh of thick black hair featuring a pronounced white streak. He jokes that while most action figures are ⅙ human scale, LPP is likely ⅕ scale because the singer was such a compact powerhouse.

On a recent rainy Friday in his home studio on Seattle’s Beacon Hill, Gua opens a doll closet packed full of hand-sewn miniature Prince outfits — the cloud suit, the “LoveSexy” jacket, the shiny purple pants — stored in chronological order. From under his work table, he pulls out clear storage boxes revealing more tiny clothes, organized by color: white, black, multi. There is only one LPP body, a traditional “ball joint doll” that Gua has customized to Prince’s proportions, but he constantly changes the outfits, the body hair (made of fuzz from black cashmere socks) and the oversized head (made of Sculpey clay).

“Some people might find this morbid,” he says, holding a box of five Prince heads in various states of completion. He meticulously carves the clay, styles doll wigs and facial hair, creates teeth and paints facial features to capture Prince’s expression — sultry, smiling or midsong. “The most challenging part,” Gua says, “Is infusing him with life.”

Gua first discovered Prince at age 13, when he was an awkward student at Tyee High School in SeaTac. “I was a geeky art kid, uncomfortable in my own skin,” Gua recalls. “Then I discovered this guy, flying his freak flag, walking around in ruffles — he was so weird, so different and so confident about it. It was life changing for me.”

When his older sister took him to a Prince concert at the Tacoma Dome in 1985, it sealed his devotion. The 1988 LoveSexy concert at The Coliseum earned a rave review from Gua in the Tyee school newspaper.

His studio is adorned with Prince paintings and drawings from those teen years — when he was already exaggerating the star’s soulful eyes and elaborate costumes.

But Prince wasn’t Gua’s first prince. He remembers an early obsession with Tutankhamen, which prompted his first-ever handmade art object: a cardboard reproduction of King Tut’s tomb that he buried in his mother’s flower bed. “It disappeared in a matter of days,” he says, “which, as a 7 year old, I attributed to the curse of the mummy, but was in reality the annoyance of the mommy.”

He was also a huge Star Wars fan, and has several collections of vintage action figures to prove it. Multiple Luke Skywalkers, Obi Wan Kenobis and Chewbaccas look down from high shelves in his studio, watching as Gua creates each new LPP. “I remember asking my mom to sew outfits for my action figures,” he says. “So maybe that’s where it started." 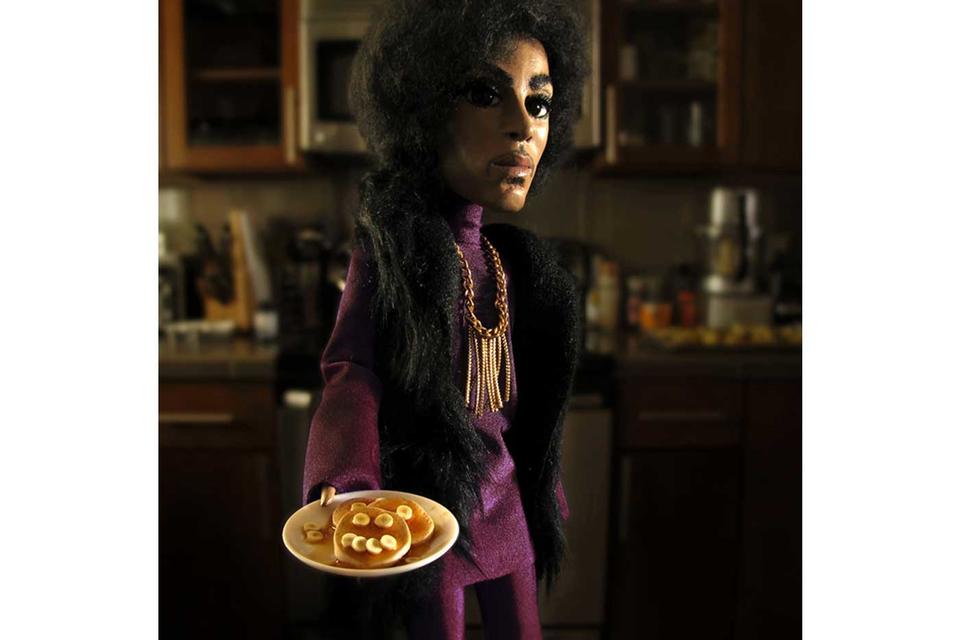 “Pancakes?” For this portrait, which emphasizes Prince’s love of flapjacks, Gua staged LPP (about 12" tall) in his own human-sized kitchen and used real maple syrup on the mini pancakes. (Photo by Troy Gua) 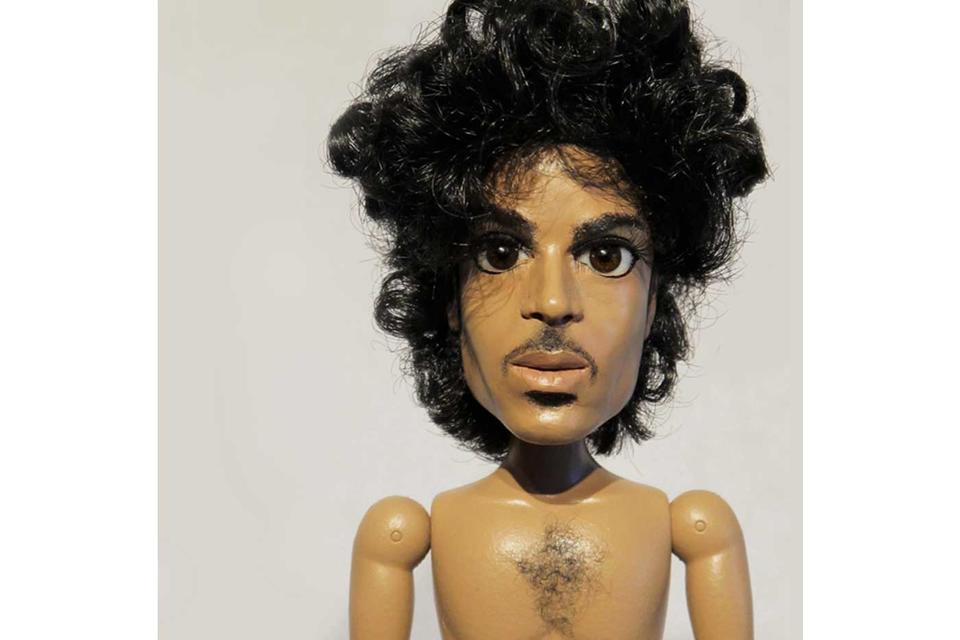 The first-ever photo of the freshly completed Le Petit Prince, in early January, 2012. Gua had begun the sculpting process in late 2011, and had not yet figured out how to make clothing for his creation. (Photo by Troy Gua) 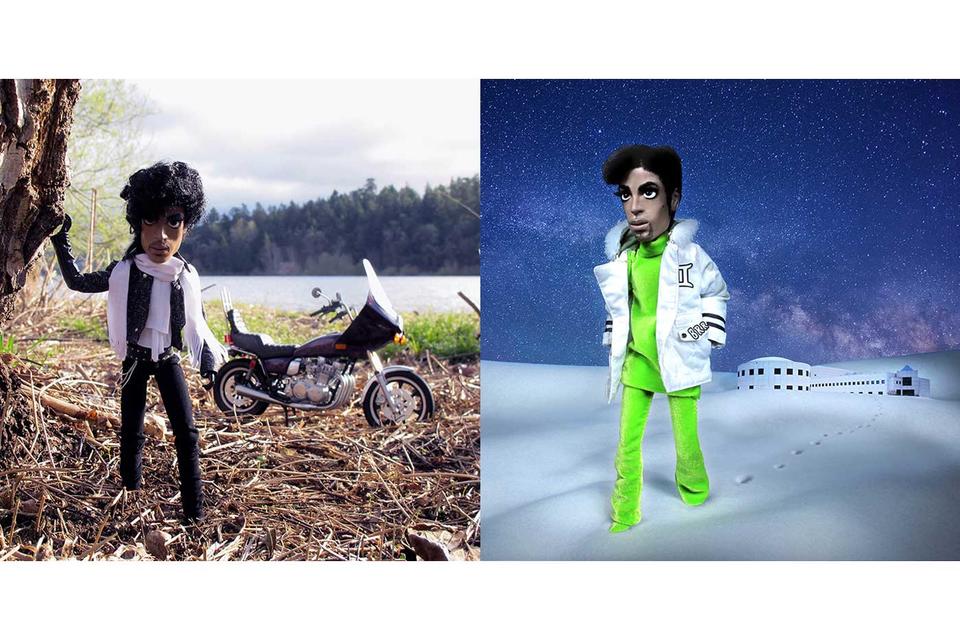 This LPP pairing is an homage to Prince’s (and Gua’s mother’s) home state of Minnesota: “That Ain’t Lake Minnetonka” (left) and “Big White Mansion.” The snow in the latter was created with a blanket of white felt. (Photos by Troy Gua) 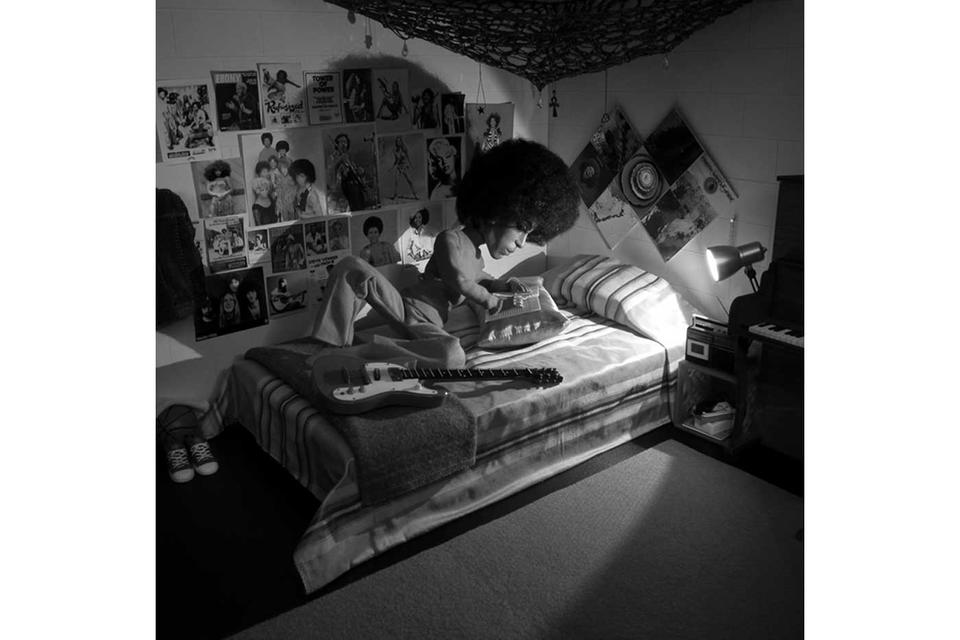 “Teenage Hero Wall” is an imagined bedroom scene and tribute to Prince’s many musical influences. (Photo by Troy Gua) 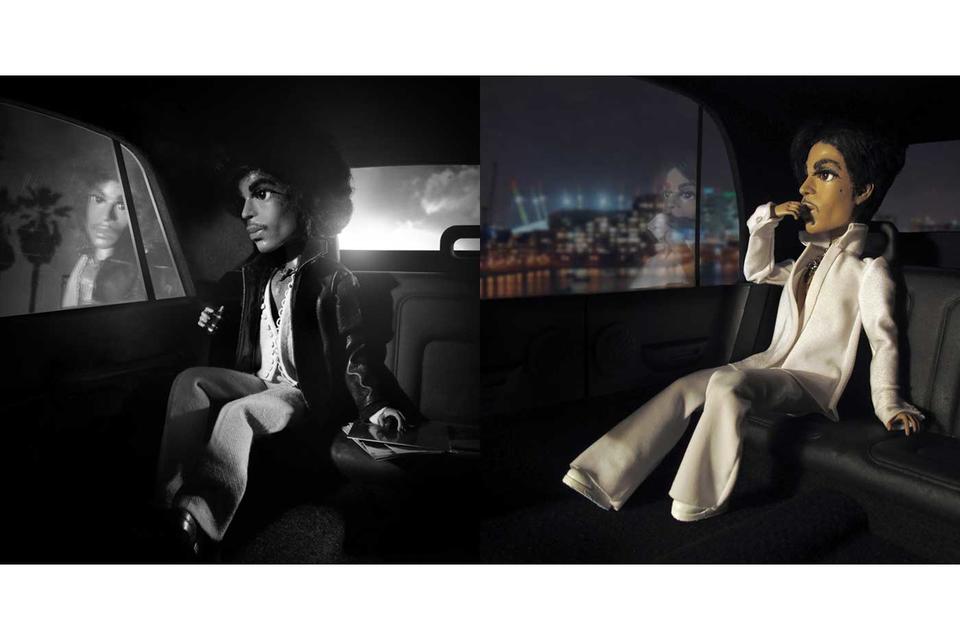 “California In-Store Limo Ride” (left) and “Londontown Limo Ride.” Both depict Prince in moments before or after an appearance — one in the late 1970s, the other in the late 2000s. Gua sought to capture shades of nervous excitement, exhausted resignation and heavy contemplation in both. (Photos by Troy Gua) 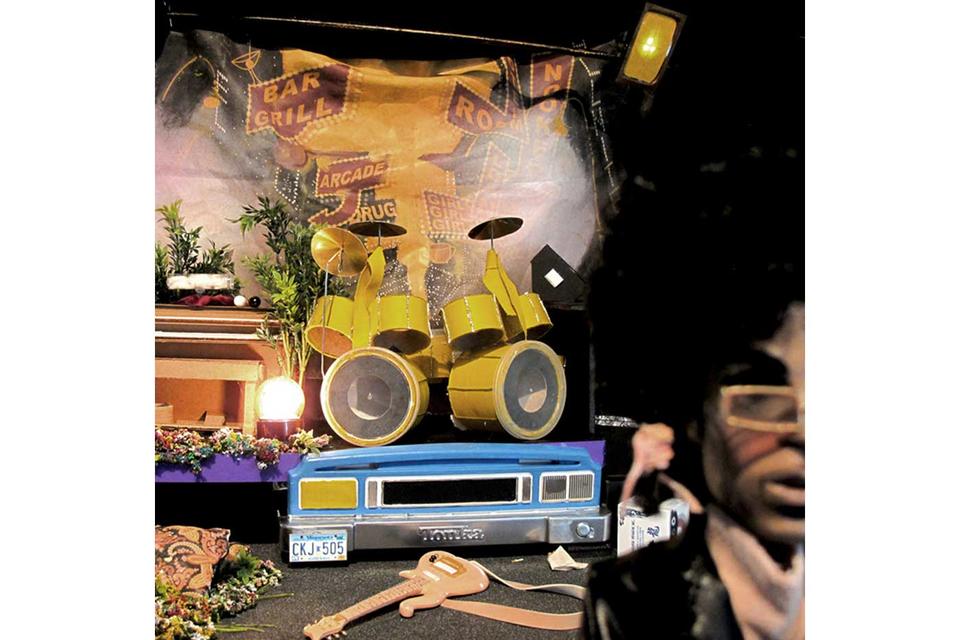 Gua’s recreation of the “Sign o’ the Times” album cover was the result of an artistic challenge from Questlove. (Photo by Troy Gua) 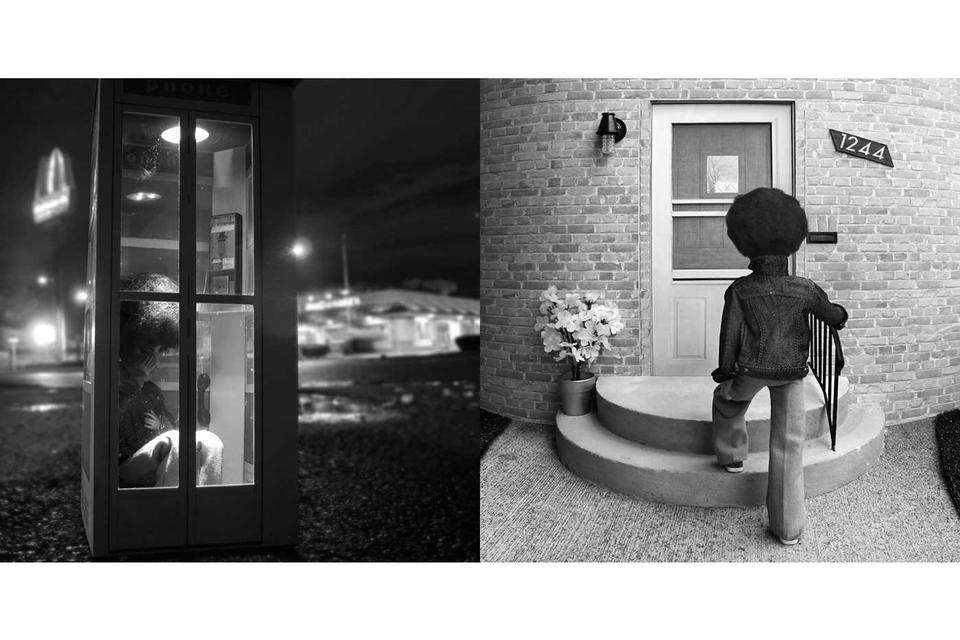 “The Last Time I Cried” (left) and “Can I Live With You?” These represent pivotal moments in Prince’s early development — when his dad kicked him out and when the Andersons let him in. The 1/6 scale phone booth is made of foam core, poster board and plastic sheeting, and was photographed across from the SODO McDonald’s. (Photos by Troy Gua) 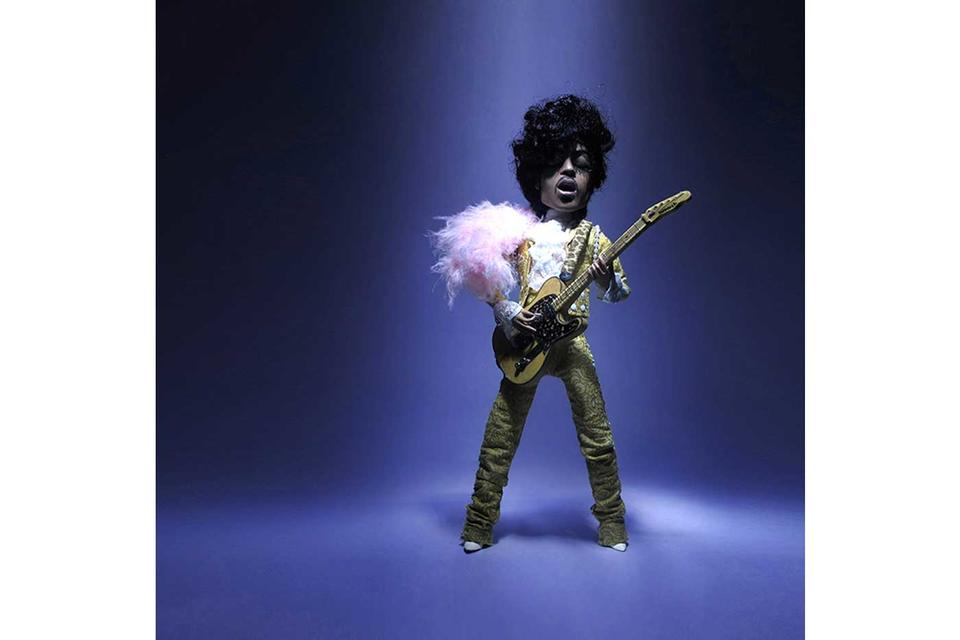 “Punch a Higher Floor,” Gua’s effort to capture the essence of the “Purple Rain” tour in 1985, when he first saw Prince in concert with The Revolution, at the Tacoma Dome. (Photo by Troy Gua) 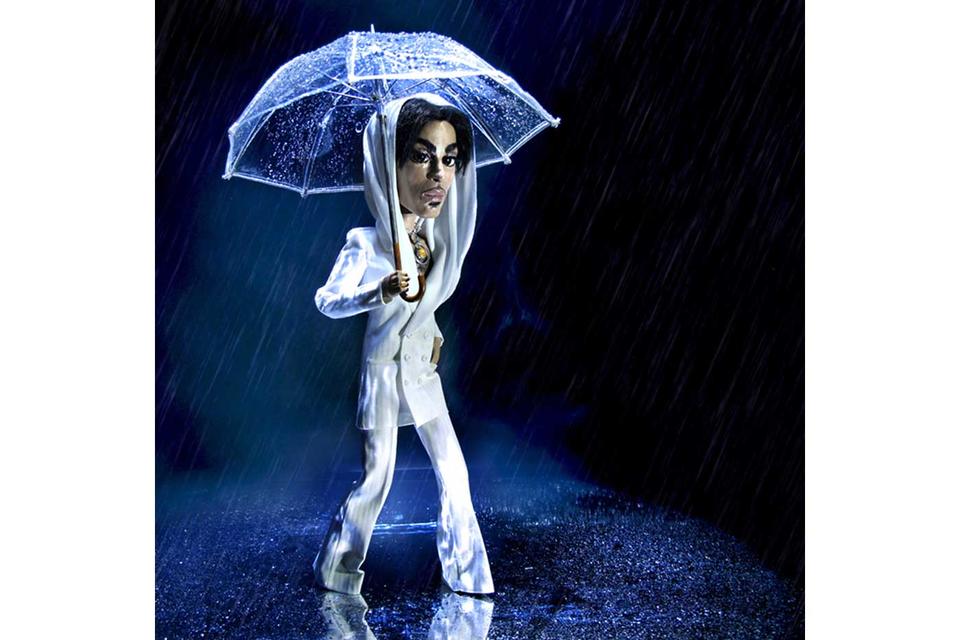 “Prince has always embodied an otherness that set him apart from the world,” Gua says. He depicts that sense of aloneness in “Pretty Man.” (Photo by Troy Gua) 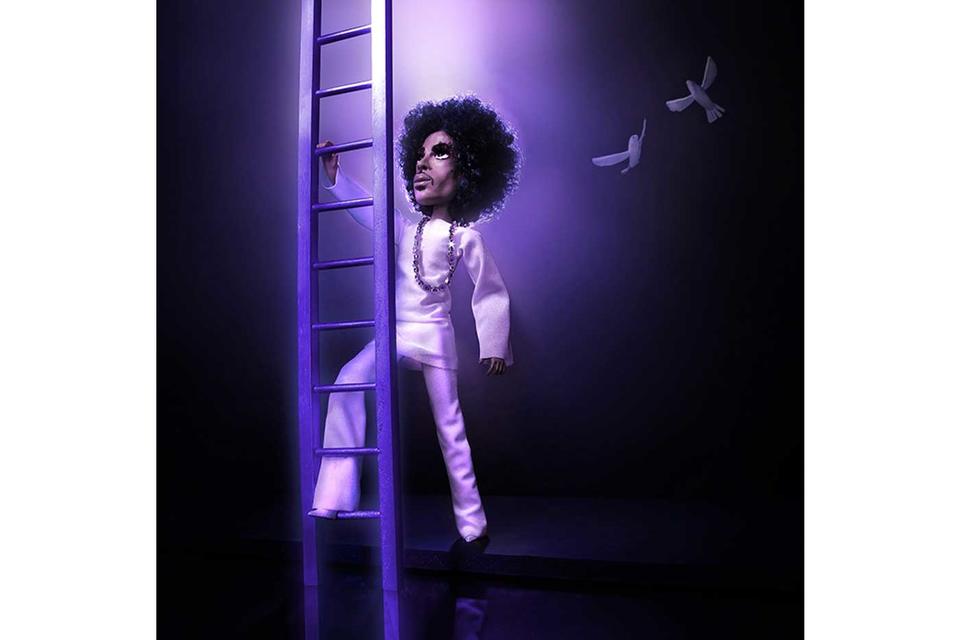 “The Ladder” is the image Gua created upon Prince’s death. He says it ushered in a new phase of the series, which shifted from a celebration of a hero to a memorial — and a way for Gua to share Prince’s story in his own fashion. (Photo by Troy Gua)

The first spark of the LPP project happened in 2004, when the movie Team America came out, with its “supermarionation” puppets in the style of the 1960s-’70s British television show, Thunderbirds. “My buddy and I were obsessed with that movie,” Gua recalls. “We were like, ‘We’ve gotta make some of those!’” He wanted to make a Prince figure, but first, they tried making puppets in their own likenesses, without success. Disappointed, he let the idea go.

Then in 2011, he says, he was playing around with a handful of clay, and “All of a sudden, I had a Prince head.” He created the LPP doll, and his wife, Catherine, sewed a tiny purple suit. “Initially I was just doing it for myself,” Gua says. He snapped a photo and put it on social media. It started getting shared. “People were saying, ‘You’ve gotta do Dirty Mind! Do LoveSexy!’ so I took it as a challenge.” When Questlove tweeted an LPP image, it went viral.

The widespread share got the attention of Prince’s lawyers, who sent a cease-and-desist letter regarding the sale of LPP merchandise. “I thought — and still think — it’s far enough removed from original artwork [e.g. album covers] that I was free and clear under fair use law,” Gua says. (He has a full explanation on his website.) To be safe, he switched the project for a time to a doll in his own image (Le Petit Troy), which he dressed as Prince, Michael Jackson, David Bowie and other pop figures. But the pull of Prince was strong. Gua returned to LPP, making sure not to replicate trademarks, and at the Prince Estate’s request added a disclaimer to his site explaining that LPP is in no way affiliated with or endorsed by the estate.

Back in his studio, Gua is at work on a new LPP scenario — inspired by a story recounted by Dez Dickerson, the guitarist in Prince’s band The Revolution. Dickerson said that when they first started out, a manager told Prince to stop wearing spandex pants without underwear on stage. It was too obscene. So naturally, the next time Prince played live, he was wearing only underwear, zebra-striped and Speedo-style. For the shot, Gua wants LPP dressed in shiny gold pants and a graphic tee, brandishing the striped underwear in his raised hands and sporting a look of defiance. He’s still trying to get the arms right.

“This whole project has been trial and error,” Gua says. “I learn just enough to do what I need to do.” He never went to art school, but considers himself “MacGyver-y.” He taught himself to carve clay into Prince’s likeness, to make miniature guitars from fiberboard and fishing line, to set up stage lighting and use a fog machine, to sew outfit replicas that are perfectly precise, down to the number of buttons.

“I know a lot of people think I’ve lost my mind,” Gua says. He knows people dismiss his work as fan art. “But that’s fine.”

He says part of what he’s always loved about Prince is how he didn’t care what people thought. “He moved from genre to genre, exploring a need to express himself,” he says. “That’s been monumentally influential for me.”

Like Prince, Gua is prolific, working on several projects at once. He has created art installations for local companies such as PicMonkey, and has a well-loved Pop Hybrids series (also currently on view at SAM Taste), in which he transposes iconographic faces on top of one another in high-gloss resin. (Think Grace Kelly and Grace Jones, George Washington and Mona Lisa, Jeff Bezos and Lex Luthor.) His most recent series, Portals (on view at Mithun Gallery), consists of neon-colored, ’80s-influenced landscapes that pull you in like a tractor beam. “These are about getting from a dark into a light place,” he says. “A way to escape.”

Making the LPP series is another escape for Gua. “I get lost in it. It’s therapeutic,” he says. “If I don’t work on it for a couple weeks, I feel it.” And while people always tell him he should sell LPP dolls, he’s determined not to do so. He doesn’t want them to become just like any other doll, and worries about what weird things people might do with them. “He’s like a being to me,” Gua explains.

But he’s thrilled by the community he’s found among legions of Prince fans. “It’s a blast to share this love with all these people,” Gua says of the LPP Instagram posts. “When I was a kid, I felt like Prince belonged to me. But with the internet, I realized there are thousands of us who felt the same way.” He sounds grateful when he says, “A lot of folks tell me it keeps him alive.”