Seattle's got terrible sidewalks. You can help fix them.

With UW's Project Sidewalk, volunteers look for broken sidewalks and missing curb ramps that make the city inaccessible for people with disabilities. 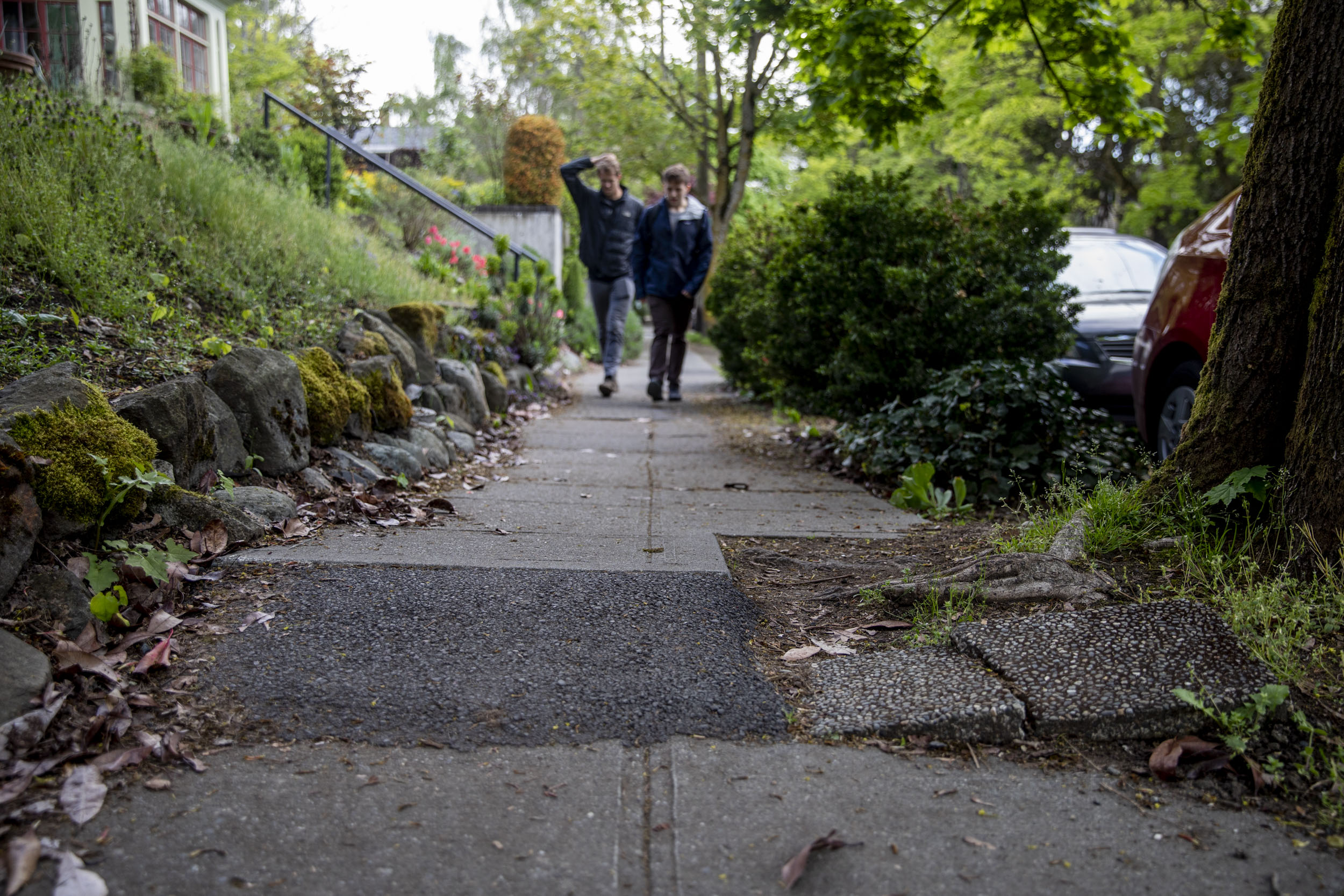 For Vanessa Link, broken concrete and missing curb ramps aren’t just an inconvenience. They’re a barrier to her independence. The 22-year-old is a University of Washington student, disability rights advocate with Rooted in Rights and power wheelchair user. She relies on reasonably smooth sidewalks and curb ramps from sidewalk to the street in order to navigate the city. When those things are missing — an all-too-common occurrence in Seattle — Link has to go a block or more out of her way or get “creative” by seeking out midblock driveways to access the street, hoping drivers see her as she crosses outside of designated walkways, and even enlisting the help of passersby.

“I really value the ability to get around Seattle in my power chair with buses and just rolling around to get from point A to B by myself,” said Link. “When I’m in an area that has rough sidewalks or doesn’t have a lot of curb cuts and I need someone’s help to cross the street, that makes me feel helpless again and not independent. … There’s nothing wrong with needing help, but it can be frustrating when you’re unwillingly put in that position by things out of your control.”

Unbroken sidewalks and quality curb ramps also aren’t just a question of doing the right thing. They are legal requirements under the Americans with Disabilities Act, the federal civil rights law adopted in 1990. Nearly 30 years after the law’s passage, Seattle, like most cities, is still lagging behind on making its streets and sidewalks accessible to everyone. In 2017, city officials settled a lawsuit in U.S. District Court, agreeing to fix or install 22,500 curb ramps by the year 2035.

In the meantime, University of Washington computer science professor Jon Froehlich is hoping to make it easier for Seattle to improve accessibility. He and a team of 10 graduate and undergrad students are behind Project Sidewalk, a web app that gathers data on sidewalk accessibility. First piloted in Washington, D.C., in 2016, Project Sidewalk launched the Seattle version in mid-April.

The app relies on data generated by users reviewing the city’s sidewalks via Google Street View, an attempt to speed up city audits usually conducted by teams of city workers walking the streets with clipboard in hand. After providing a brief tutorial about what to look for, Project Sidewalk sends users on a “mission” to assess and label a few blocks of the city at a time. The users are asked to rate the quality of existing curb ramps (do they point directly into traffic? are they too narrow?); identify intersections with missing curb ramps or missing sidewalks; point out problems with sidewalks, such as broken pavement or trees and light poles obstructing the route; and add other issues that might prevent a wheelchair user or other person with a mobility disability from easily navigating the city. As users “walk” the streets, the program shows how much of the mission has been completed in a progress bar, an element that’s meant to gamify the work and further provide incentives for volunteers to give their time. Currently the program only works using web browsers on computers, but the team plans to eventually add a version that works on phones and tablets.

Froehlich hopes Project Sidewalk leads to a few outcomes. The first is for the program to help educate the “broader citizenry, not just policy makers and transportation departments,” about common barriers to accessibility. He also wants to help keep politicians accountable when cities are not meeting ADA requirements, as is so often the case. Froehlich thinks the trove of data the the program collects could have lots of practical purposes, as well. One example could be how it strengthens the utility of tools like Access Map, another app created by UW computer scientists. It helps people with mobility disabilities find routes through Seattle that avoid the steepest hills and intersections with missing curb ramps.

Link spent an hour playing with Project Sidewalk for the first time before speaking to Crosscut. “I’m really excited about it,” she said. “It is a hands-on way to educate not only other disabled people about places they may want to go, but also spread awareness to nondisabled people or even people who have the power to make changes to the sidewalks and accessibility of Seattle.”

Project Sidewalk launched when Froehlich was a professor at University of Maryland. For its audit of Washington, D.C., 797 users labeled more than 205,000 good and bad pieces of sidewalk over 18 months. The Project Sidewalk team is still analyzing the data, but they have found that the users' assessments were accurate about 72 percent of the time.

Seattle and the town of Newberg, Oregon, are in the second wave of the project. Eventually, Froehlich hopes to expand to many more cities. One of the new features of Project Sidewalk is that people can help validate the work of other users. That validation is important for improving the quality of the program's data, making it more useful for Forehlich’s machine-learning goals. Long term, he wants to automate the accessibility audits — and the goal of offering cities trustworthy data.

Trustworthiness will be key for the Seattle Department of Transportation (SDOT) to adopt the data from Project Sidewalk, said Emily Burns, who manages the SDOT's database of assets throughout the city, including sidewalks.

Burns has had conversations with Froehlich and others at Project Sidewalk. She has some reservations about human errors from volunteers and the limits of Google Street View as an auditing tool, questioning whether they might miss a problem sidewalk when there’s a parked car or bush blocking the Google camera car’s view.

“I’m trying to figure out how Project Sidewalk’s data will inform our big picture,” Burns said. “I need data that I can validate or feel confidence in. Right now, I don’t know what’s going to come back from their data.”

SDOT's sidewalk repair work is informed by a physical audit of nearly all the sidewalks in Seattle that SDOT interns conducted in 2017. They walked the entire city, documenting missing curb ramps, broken sidewalks and other problems. That data has helped SDOT take a more proactive approach to sidewalk repairs and curb ramp installations. Prior to that audit, much of their sidewalk repairs came in reaction to complaints from random pedestrians. She said Seattle has increased sidewalk repair efforts recently, in part because better data about sidewalk conditions led to more funding for their work. SDOT did about 1,000 sidewalk spot repairs in 2017 and more than 10,000 in 2018.

Though Burns is unsure whether there will be a role at SDOT for Project Sidewalk in the near future, she is excited about the effort. For one, the possibility of developing machine learning that is sophisticated enough to do trustworthy audits is intriguing. Burns, like others, is also excited about Project Sidewalk as an educational and advocacy tool. The more people know about a problem and raise the issue with elected officials, the likelier it is that solutions will get funded.

Currently, sidewalk repair gets less than half the funding that new construction receives (granted, there’s a 1,800-year-long backlog of new sidewalk construction to be done in Seattle). Between 2018 and 2024, SDOT has $59,569,000 in funding for new sidewalks versus just under $29 million for repairs. There are about $1.3 billion worth of sidewalk repairs to be done throughout Seattle, not including the hundreds of millions it will cost to install missing curb ramps.

“Maintenance is not sexy,” said Burns."People want to do the new projects and the ribbon cuttings. If we can continue talking about how we take care of our existing assets and the things we’re doing to provide better access to everyone, that’s a real win.”