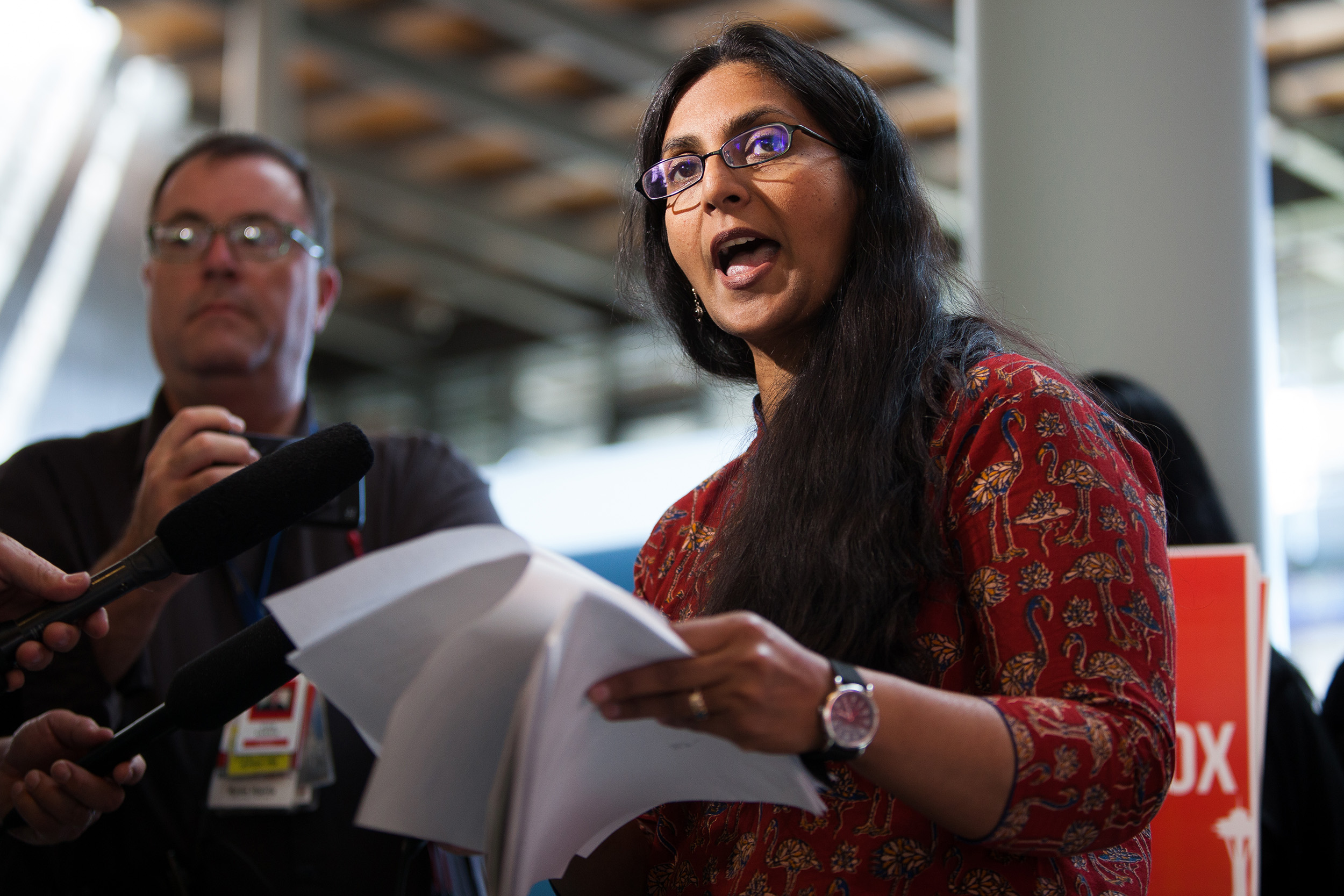 Councilmember Kshama Sawant speaks to press during a rally to protest proposed development at the site of the Showbox Market on  Aug. 1, 2018, at Seattle City Hall in Seattle, Wash. (Photo by Jovelle Tamayo for Crosscut)

Kshama Sawant's last election wasn't even close. After her razor thin 2013 victory, the controversial socialist member of the Seattle City Council easily bested a well-resourced candidate in 2015. It was proof, it seemed, that her surprise ascendancy to become Seattle's most recognized and fought-over politician was not a fluke.

Four years later, Sawant is running for a third term. Challengers are lining up, gambling that the ground in Seattle — and specifically in and around Capitol Hill and the Central District in District 3 — has shifted enough to leave her vulnerable.

With over 50 candidates vying for seven city council seats, this year's election is going to be raucous. Public approval of the council is down and conversations about homelessness and housing have grown vitriolic. Four council members have already opted out of seeking re-election.

Even within this environment, the District 3 race stands out. Love her or hate her, Sawant has done more to remake the image of the once docile city council than any other elected official. Rather than handshake deals with colleagues, she prefers mobilizing her vocal supporters to create outside pressure. It's an approach that doesn't often get Sawant everything she wants, but has undoubtedly pushed the council toward conversations around taxes and landlord regulation it may not have had otherwise.

Those running to replace her vary widely — with some saying Seattle has grown too fast, others saying the city must grow faster to keep up with the population. But they share in common one goal: unseating Sawant.

On Tuesday, another candidate entered the race with a variation on that message. Seattle School Board member Zachary DeWolf declared his candidacy for Sawant’s seat — armed with the endorsements of council members Teresa Mosqueda and Lorena González. An increasingly well-recognized face in Seattle's political and community organizations — including as a program manager with King County's homelessness prevention organization All Home and as president of the Capitol Hill Community Council — DeWolf is running on a progressive platform that includes a call for more spending on homelessness, while reaching out in a divided city and including more Seattleites in the political process.

"I truly believe that when we come together, when we think about solutions creatively and we have some hard conversations with our neighbors, they tend to show up and understand that the higher commitment is to helping their neighbors," he said in an Uptown coffee shop last Friday.

Although DeWolf himself did not say so directly, his call for conversation and collaboration touches on what a number of Sawant’s challengers see as a weakness: her commitment to her District 3 constituents. As district-based representation has come into sharper focus since 2015, responsiveness and attention to street-level issues have become a cudgel for Sawant's opponents as they seek to cast her as both removed from the nitty-gritty of granular governing and beholden to her party, Socialist Alternative.

Sawant disputes this characterization, saying she often hears from constituents that her office is the only one that listens. "I honestly don't know what to make of it because it doesn't have any shred of reality," she told Crosscut last week.

Still, it's one of several — sometimes conflicting — narratives she will be fighting through the course of the election and one that the growing list of wannabe council members in District 3 will likely focus their energy on.

With just over a month until the cutoff to file for election, DeWolf joins an already eclectic list of people seeking to represent the renter-heavy area east of downtown, south of the ship canal and north of Rainier Valley.

Some of the candidates want to turn the race into a referendum on Sawant.

Pot-shop owner Logan Bowers is running on a call to reform the city's land-use code and open up single-family neighborhoods to more apartments, row houses and duplexes.

Pat Murakami is a former council candidate and a longtime neighborhood activist who owns a computer-repair store in Georgetown. An opponent of recent efforts to add density to some neighborhoods, she believes City Hall bends too much to the will of the developers.

“I think people are frustrated that she has not been accessible or responsive," said Murakami.

And Egan Orion is the head of the Capitol Hill Chamber of Commerce, who said he jumped in because business-owner Beto Yarce withdrew from the race. He's running on a platform of helping small businesses in the district, cleaning up sidewalks and practicing “good governance.” He calls Sawant the “unrepresentative.”

“I think the last four years of Kshama Sawant being our district rep, it's not working," he said. "She doesn't do a good job of engaging constituents."

Sara Brereton is the onetime owner of 701 coffee shop and has consistently been an outspoken opponent of Sawant, accusing her of not listening enough to small-business owners.

Others, however, are hesitant to go after Sawant directly.

Ami Nguyen is a public defender at Harborview Medical Center with the county's involuntary treatment court. The daughter of refugees from Vietnam, she's running to reform the criminal justice system to work better for people without a support network.

“It's not necessarily one specific person or one act that he or she did," Nguyen said during an interview on First Hill, near her work. "It's about recognizing that we have different blind spots based on how we're raised. I think we make up those blind spots by including people from different backgrounds on the council."

In her defense, Sawant points to her dramatic rise and tenure on the council as empowering for her constituents. "Look where we are today compared to five, six, seven years ago," she said. "What we are seeing is a real increase in confidence of ordinary people to engage in a struggle where they can actually have an impact on social outcomes."

Part of what angers Sawant’s opponents and delights her supporters is her absolute and uncompromising commitment to what she believes is the right path — be it taxing big businesses, rent control, tenant laws or police reform. As some candidates cast about for civility or compromise, Sawant picks sides and welcomes enemies, as long as they're the right ones.

"In a situation where there's a deep inequality on the ground, it is either willfully disingenuous or just plain naïve for politicians or candidates to claim that they respond to everybody," she said. Sawant pointed out that District 3 has both a large number of renters and some of the city's wealthiest residents — including Howard Schultz, former Starbucks CEO and possible presidential candidate.

"You're either representing the very rich or you're representing working people," she said. "It's a question of whether you're honest about which side you're on."

But while Sawant may see her enemies as the rich and powerful, some candidates see normal people growing frustrated with the council member.

Orion said when he was at the Capitol Hill farmers market recently, just the mention of his campaign against Sawant spurred immediate interest in his campaign. "These are just everyday citizens of the district," he said.

Despite what Sawant's opponents say they are hearing from her constituents, her fundraising is as voracious as it's ever been, with over $60,000 in her bank at last check. Much of this is coming from outside Seattle — which challengers love to point out, but something that isn’t anything new. Sawant has relied on her national standing among some socialist groups for her entire political career.

Meanwhile, the city has been in a constant state of emergency on homelessness since her last election, while housing prices have gone up $200,000.

Whether District 3 voters prefer to stay the course, or change direction remains to be seen.