A tour of the places that inspire Seattle's Youth Poet Laureate

On the eve of competing for a national title, rising poet Azura Tyabji visits formative locales in her hometown. 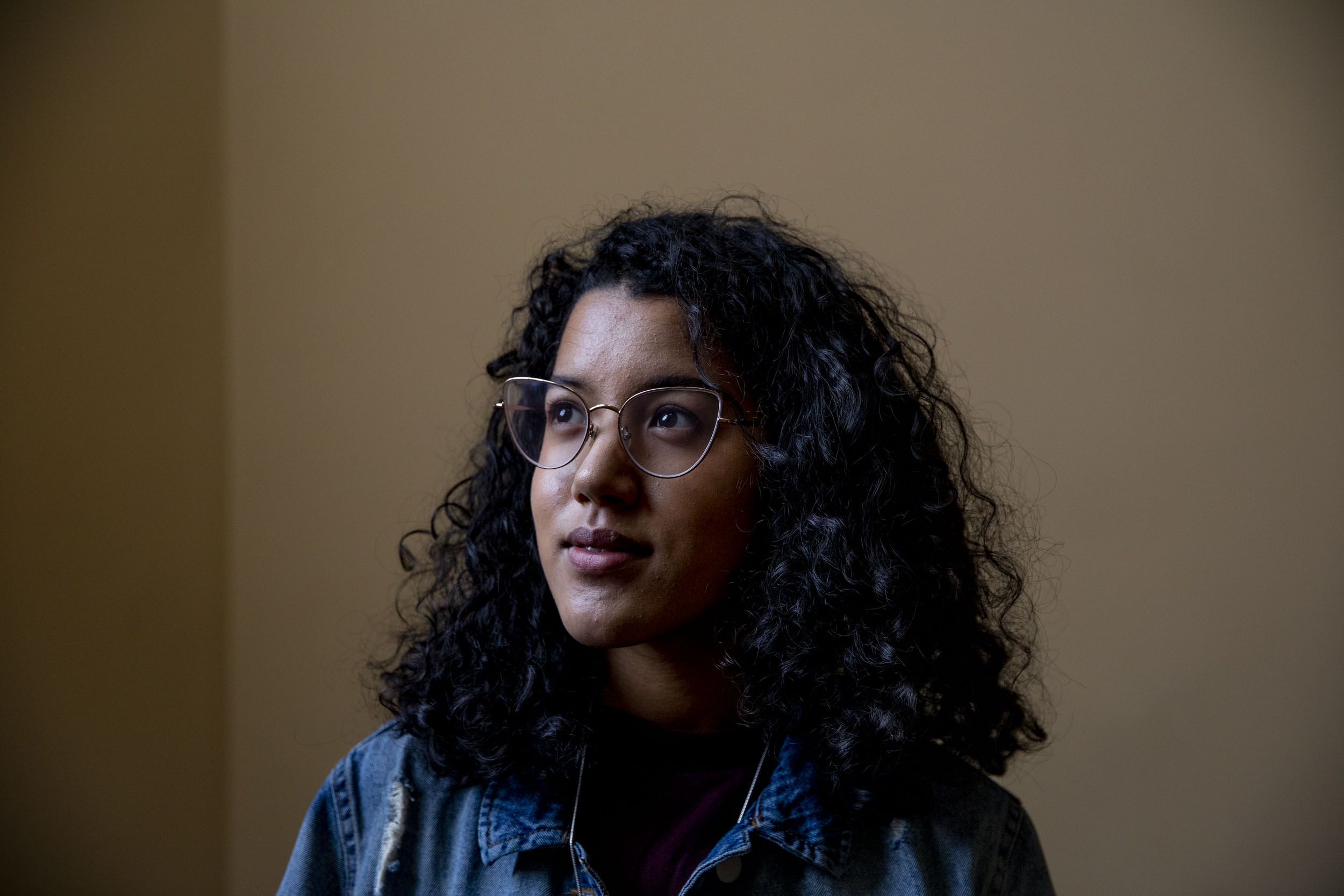 It’s been four years, but Azura Tyabji still remembers the thumps of her thick-heeled, black boots — “goth clown shoes," as she calls them— on the steps leading up to the podium at Youngstown Cultural Arts Center.

She wasn’t nervous at all. “I had a spring in my step,” she recalls. “Something clicked. On the stage, it felt like my truth wasn’t up for debate.”

Tyabji shared three poems: One, written nearly a year after a police officer shot and killed 12-year-old Tamir Rice, dealt with the pain of witnessing Black death on social media. A second shattered the notion of “female privilege.” The third talked about writer’s block.

She won the slam.

Since then, the usually soft-spoken organizer and educator has gone on to convince jury after jury that, on the stage, she’s even more of a force to be reckoned with. When she’s reading, her voice grows louder, quick and unwavering in her precise and forceful takedowns of the patriarchal and racist society she sees around her.

On April 4, Tyabji, now Seattle’s 2018-2019 Youth Poet Laureate, will perform in the nation's oldest federal cultural institution, the Library of Congress in Washington, D.C. She will compete with four other youth poets laureate from across the country for the title of National Youth Poet Laureate. Though winning the third-ever iteration of the national competition would earn her a prestigious title and countless national exposure, Tyabji’s not that interested in a victory per se.

“We’re not uniting for competition, but coalition, and furthering poetry as a community,” Tyabji says. Case in point: she’s in a group chat with her competitors, the four other regional youth poets laureate, hailing from Chicago, Nashville, Houston and Baltimore. As she learned at her first slam, “the point is not the points. the point is the poetry.”

Crosscut recently asked the 18-year-old Tyabji, who was born and raised in Seattle and has in many ways grown up with the city, to “map” her Seattle. What are the places that made her? Where does she find solace and community?

“I practically live here,” Tyabji says as she walks past collages, paintings and sculptures to the kitchen space of the arts education nonprofit Arts Corps. When Tyabji was still a “slam tater tot” looking for a poetry community, she found it here when she enrolled in Arts Corps’ Youth Speaks Seattle Teen Leadership Program, Spokes, for word artists aged 14-19.

She’s now the teen leadership coordinator, supporting young poets by planning and managing internship, events and programs. She says she tries “to provide a brave space to my peers to proudly call themselves poets who uplift community,” she says. "We always come back to the root of why we’re here: to celebrate young people sharing their voices.”

When I was still young in South Lake Union, I cradled a fallen sparrow’s head in the tenderness of my palm, Tyabji writes in her poem “206,” a reference to the time she lived here more than 10 years ago, with her grandmother and parents. She now lives between North and South Seattle.

“This neighborhood has become completely unrecognizable to me. It’s like ground zero for Seattle’s dramatic transformation into a huge tech city. I remember coming down to the water, feeding ducks," Tyabji says. “The water’s kind of stayed the same.”

Tyabji’s coming of age has largely overlapped with the city’s recent growth spurt. “What I think we’re both grappling with is: what is our future going to be? Are we going to go towards what’s new and shiny and expensive and call that success? Who are we leaving behind, and who am I leaving behind if I keep chasing these standards of success and prosperity?”

On the fourth floor galleries of the Seattle Art Museum, Tyabji halts at a dark-blue orb, part of an immersive work by artist Saya Woolfalk about a futuristic utopia wherein people from different cultures can come together.

“When I came here for the first time, I spent like 30 minutes standing here,” Tyabji says, her soft voice barely audible over the trippy, ambient soundtrack that’s playing. “It’s sci-fi in a museum. I love Afrofuturism, and this is what it feels like to me exactly.”

Tyabi, who identifies as “a queer woman of Black and Indian descent," continues: “Black folks — we weren’t written into the future. This [installation] feels so imaginative and fresh.”

Since “falling in love” with visual art during the Kehinde Wiley exhibit in spring 2016, Tyabji has been a regular at the museum. Now, you can find her at SAM during Teen Night Out or as a self-described “field observer,” taking notes on her iPhone that might later turn into a poem.

At the Wiley exhibit, a particular painting struck her: “It was a beautiful garden,” she says, “but if you looked closer, a Black woman was lying there. She could be resting, she could be dead” — she wrote:

Many people walk past your peace

marveling at the sequins, the shine

they don’t notice the body lying in the neon fray

it seems intentional to put it in the hallway

We always pass through black death

do not notice the wounds.

LoveCityLove is a multipurpose art space housed in a set of formerly vacant buildings on East Pike Street. The only signage on the black-painted building reads, “Artificial Limb Co.”

“It can look like nothing is happening,” Tyabji says, peering through the windows at a nearly empty space inside. “But in actuality, a lot is happening here; there’s a lot of love being poured into this space.”

Tyabji has been making the trek to LoveCityLove every first, third and sometimes fifth Tuesday of the month since mid-January, when friends and mentors, Ben Israel and Ebo Barton, premiered a new all-ages poetry showcase called Alchemy Poetry.

“Alchemy came out of the need for a weekly poetry space that is noncompetitive and intergenerational,” Tyabji says. “Since then, Seattle Poetry Slam has moved here as well. Previously, it was at Re-bar, which is a 21-plus space, so I could never go, which sucks because I want to see my mentors perform and cheer them on. So now it’s in a space that anyone can come to and it fills my heart with so much joy.”

Tyajbi’s mother used to run a summer program for Muslim girls here, at what was then the AfricaTown Center for Education and Innovation. Then Seattle Public Schools decided to renovate the building and police cleared a group of people who had been occupying the building. The Nova alternative high school moved (back) into the building in 2016. Tyabji enrolled at Nova in 2015 and graduated last year.

"I love the school," she says. “[Nova] empowers students to decide on their education. It is a haven for a lot of disenfranchised students. That’s why I chose to go here as a freshman,” Tyabji says.

As a freshman, she enrolled in a poetry and writing class titled, “The Naked Truth on Stereotypes,” which aimed to cultivate the voices of marginalized students. The class changed her life.

“Before ‘Naked Truth,’ poetry felt apolitical and removed from my identities as a Black and Brown young woman. It changed my course by showing me that poetry can be a powerful medium to fight for social justice and liberation.”

“This space,” Tyabji says, standing in the entrance hall of the Black Power Epicenter, a collective sociocultural and political anti-racist organizing space with a garden, meditation space and media lab, “holds a lot of significance for me because it was the place where I was educated on systems of oppression.”

Tyabji worked here as an organizer with Seattle Young People's Project, a youth-led social change organization, and learned more about institutional racism during a summer school camp. “From Youth Undoing Institutional Racism, the minds behind the No New Youth Jail campaign, to EPIC, End the Prison Industrial Complex, this is the meeting space for so many brilliant Black organizers who inspired me so much,” she says.

“I think of what Nina Simone said: ‘It’s an artist's duty to reflect the time. [This space] compelled me to write poetry that reflects the time.”

Tyabji attended her first ever poetry open mic at The Station. “A beautiful and transformative experience," she says. "Ever since then, I’ve come here every first Sunday of the month to attend or facilitate open mics.”

When she walks into the bustling café, across the street from the Beacon Hill light rail station, she’s greeted like a regular and a friend.

“[The Station] feels like more than a café,” she says. “There are always community events happening. When Charleena Lyles was murdered by police in 2017, they held a clothing and supply drive for her kids here. When Nikkita Oliver was running for mayor, I remember seeing so many meetings happening here. It feels like a place I can always go to find a friend or find someone whom I hope to be a closer friend.”

Community, she says, is at the core of her poetry. It has even inspired her forthcoming poetry début, Stepwell, slated to publish with Poetry NW Editions in May. The places she’s mapped, the people she’s run into —  those are the “stepwells,” sources for sustenance and reflection. “My community is my well. They sustain me. Just watching them, but being there to support them also — that’s so life-giving.”