WA advocates are asking for $100M more to fight homelessness

They say the Legislature needs to double the Housing Trust Fund to make a dent in the state's affordable housing shortage. 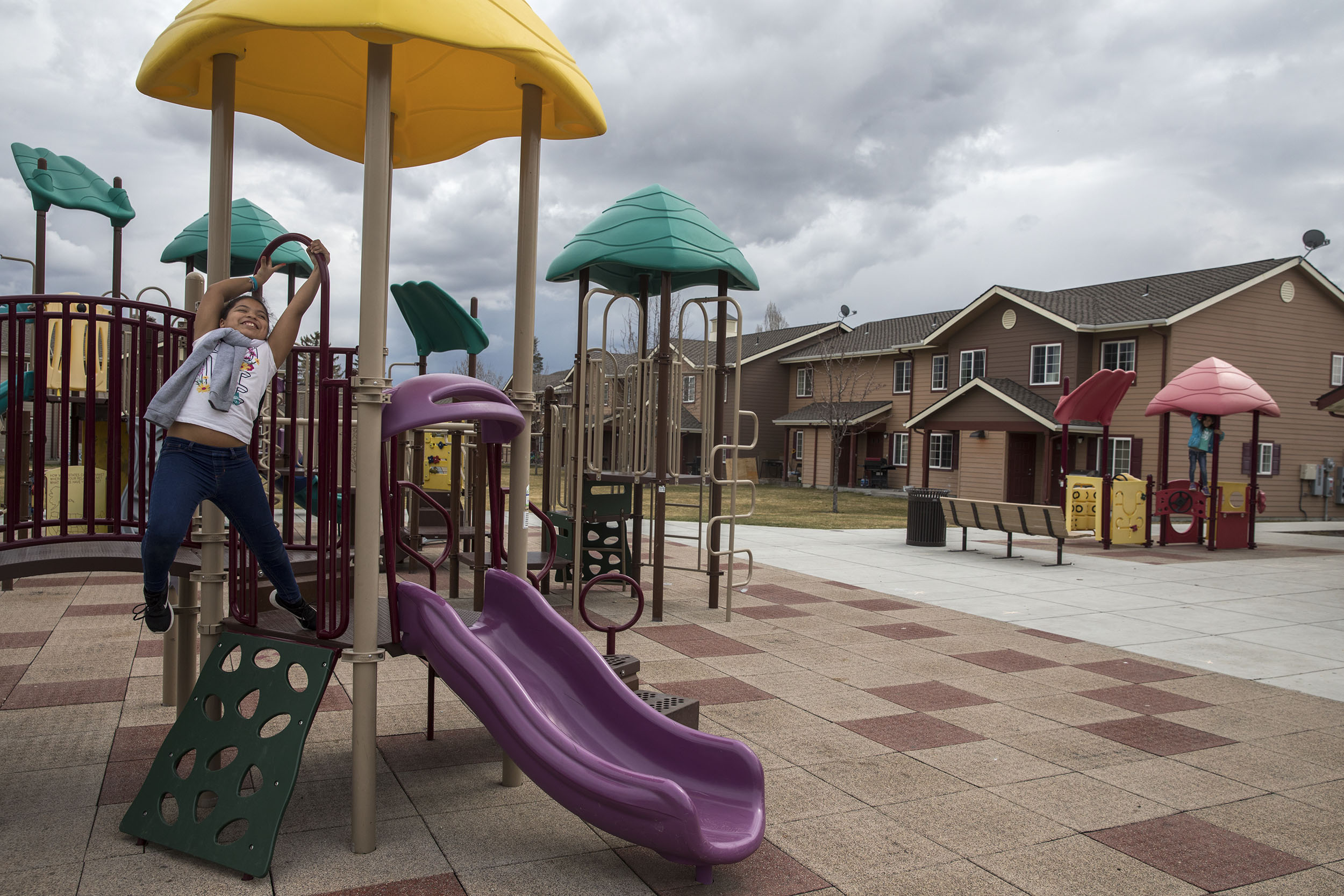 A child plays on a structure at the playground inside Santa Martha Plaza, an affordable housing development managed by Catholic Charities in Quincy, Washington. Catholic Charities relies on money from the state Housing Trust Fund to build its low-income housing. (Photo by Matt M. McKnight/Crosscut)

Without the state Housing Trust Fund, Bryan Ketcham is unsure whether his organization could build any affordable housing. Catholic Charities of Central Washington constructs and manages low-income housing developments serving primarily farmworkers and their families in Yakima, Chelan and Grant counties. Nearly every one of the organization’s 23 housing projects used money from the Housing Trust Fund to get built.

“There just aren’t other resources available,” said Ketcham, Catholic Charities’ director of housing services. “We serve predominantly rural communities and one of the things they have in common is there’s a lack of local funding for affordable housing.”

Even in places such as Seattle and King County, where there are local and regional funding sources to help developers build affordable housing, the state trust fund is seen as a critical tool to meet the growing need.

Homeless and affordable housing advocates statewide argue that a larger Housing Trust Fund is essential for moving the needle on Washington’s interconnected affordable housing and homelessness problems. This year, they’re lobbying the state Legislature to increase the Housing Trust Fund to $200 million in the capital budget, almost double the $107 million funding level in last year’s budget.

Whether or not the Legislature comes back with the full $200 million that advocates have called for, the Housing Trust Fund appears poised for a significant bump in size. Released in March, the proposed House budget would increase the trust fund to $150 million. A week later, the Senate proposed a $175 million trust fund.

“The leading cause of homelessness is the lack of affordable homes,” said Michele Thomas, director of policy and advocacy at Washington Low Income Housing Alliance. “Rents are out of reach. We know the private market is not going to house people with low incomes.”

She continued, “It’s the trust fund that solves that. The trust fund is critical when we’re building homes for low and extremely low income folks. It’s really the difference between whether a project will pencil or not.”

As evidenced by the proposed Housing Trust Fund increase in the next budget, it’s a message lawmakers are receiving.

“There are homelessness issues all around the state,” said Sen. David Frockt, a Democrat whose district covers Northeast Seattle, Kenmore and Lake Forest Park. “It’s a key priority for Senate Democrats. … I certainly heard [about homelessness and housing] from constituents this summer while out campaigning.”

Washington’s Housing Trust Fund was created by the Legislature in 1986, making the state one of the first in the country to do so. Administered by the state Department of Commerce, the trust fund provides money for low-income housing construction. In the years since its creation, it has granted over $1 billion in funding to build 50,000 units of affordable housing. Before the Great Recession, the trust fund hit its historical high in funding with just under $200 million in the 2007-2009 biennial budget.

Nonprofit housing developers, local and county housing authorities, tribes and local governments can apply for up to $3 million for rental housing projects and up to $600,000 for home-ownership projects. The projects must be affordable to someone earning 80 percent or less of area median income.

That covers a wide range of housing, from emergency shelters to apartments for people exiting homelessness to rentals for families and even homes for low-income first-time buyers. Because funding is limited, the state Department of Commerce prioritizes projects that serve people with the greatest need, typically those earning below 50 percent of area median income. Projects funded by the trust fund must remain affordable for at least 40 years.

With a $3 million cap, a trust fund award wouldn't be enough to build a housing development. But a government loan for a project vetted by the state is a signal that a nonprofit low-income housing developer such as Catholic Charities can use to secure the rest of its financing from banks, grantors and other private investors.

“It’s really a catalyst to get these projects going. We see in our projects that every dollar from the trust fund leverages four to 10 additional capital dollars from other sources,” said Ginger Segel, chief development services officer of Community Frameworks, a nonprofit that builds affordable housing in Spokane and serves as a development consultant throughout the state.

The demand for funding from the Housing Trust Fund greatly outstrips its budget. In the 2017-2018 biennium, the Department of Commerce received over $164.5 million in applications and awarded just over $73 million. The Washington Low Income Housing Alliance calculates that its desired $200 million Housing Trust Fund would provide enough funding for over 5,500 units of affordable housing.

Considering that there are more than 22,000 homeless residents and hundreds of thousands of households across the state that can barely afford their rent, a larger trust fund alone won’t solve the problem.

“Truthfully, meeting the need will never be possible in a two-year budget,” said Alison Eisinger, director of the Seattle/King County Coalition on Homelessness. “We have underinvested for so many years and so many people need homes. When we remind people that the federal government is the biggest source of affordable housing investment and that they have decreased investment for decades, then people understand what we are urging our state Legislature to do is absolutely necessary.”

That is one reason housing advocates are pushing several other funding ideas in the Legislature this year. A bill, sponsored by Rep. June Robinson, D-Everett, would allow cities and towns to retain a portion of state sales tax revenue they collect for affordable housing construction.

Another is a progressive Real Estate Excise Tax (REET) bill, part of a broader tax reform effort. REETs are a tax on the sale of property, and Washington currently charges a flat REET of 1.82% on all property sales. Housing advocates want to create a tiered REET that charges more for higher value properties and reduces the tax for lower value properties. Revenue from the higher REET could be added to the Housing Trust Fund. The REET change is moving forward in the Legislature, but currently the proposal is to put the revenue into the general fund.

All told, housing advocates say their proposals would generate $600 million for affordable housing, enough to build about 17,000 units of low-income housing across the state.

“That is getting pretty close to meeting the need,” said the Low Income Housing Alliance’s Thomas. “Washington needs to get ahead of the affordable housing crisis and that’s only going to happen if we fund the construction of new affordable homes, and we make reforms that prevent people getting evicted. For every person we get into a home, there’s another household being evicted into homelessness.”

Advocates realize they likely will not get the full $200 million Housing Trust Fund budget they’re lobbying for or the larger $600 million package. Between now and the scheduled end of the legislative session on April 28, the House and Senate must reconcile their proposed budgets. Thomas has her fingers crossed that the final package looks more like the Senate’s than the House’s version.

“[The Senate's] $175 million is obviously a lot better than $150 million,” she said. “That’s hundreds more homes in Washington state represented in that $25 million difference.”