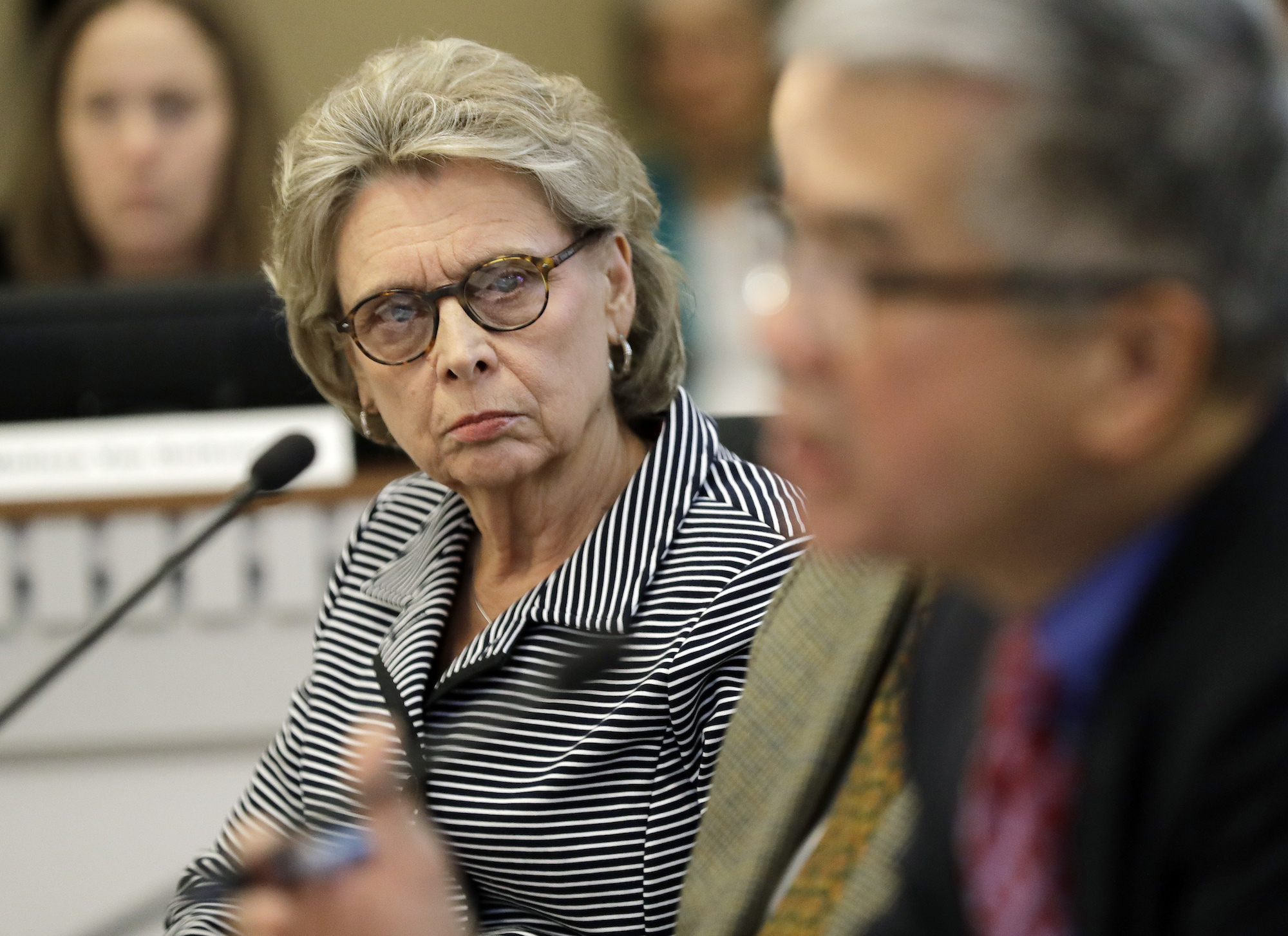 Former Washington Gov. Chris Gregoire listens to testimony during a hearing on Initiative 1000 before a joint Washington state House and Senate committee, April 18, 2019, at the Capitol in Olympia. Gregoire and former Gov. Gary Locke, in front of her, spoke in favor of Initiative 1000, which would allow the state government to use affirmative action policies that do not constitute preferential treatment to remedy discrimination in public employment, education and contracting. (AP Photo/Ted S. Warren)

Listening to the opposition to Initiative 1000 last week made me feel like some kind of bogeyman. The term “affirmative action” seems to equate to “Mueller report” as cause for apprehension among contemporary conservatives. It also has been firmly attached to the initiative, presumably a triumph of tactics by its opponents.

So I wonder: What makes me so scary?

I am the son of a Japanese immigrant who went all my life to inner-city public schools in Seattle. I finally attended a private school, Seattle University, because its Office of Minority Affairs recruited me and offered a scholarship. I was the first in my immediate family to go to college, though my parents always portrayed that path as a fait accompli. I did my graduate work at an Ivy League school, Columbia University, where, at the time, being of Asian descent was a plus, as it might not be considered today.

No doubt, I profile as a beneficiary of affirmative action. I may not have been offered the same educational opportunities had race not been a factor. But I never have been handed anything. I worked two jobs while earning high grades and was elected to student body government at Seattle U. I worked in the garment industry while receiving all A’s at Columbia, where the blue books do not have a place to list race or ethnic heritage. If my profession, journalism, ever employed racial quotas, then U.S. newsrooms would not be 78 percent white, as they are today.

If I’m a case study for affirmative action, what in anything I outlined above could possibly be construed as frightful, especially in a country where scholarships have long been awarded on the basis of parental job status, ethnicity or religion?

Yet if a legislative hearing could be considered a microcosm of the forces aligned for and against a measure, then last Thursday’s public testimonies before the state House Civil Rights and Judiciary Committee and the Senate State Government, Tribal Relations and Elections Committee revealed a definite inclination, on the opposition side, for fear-mongering.

Under Initiative 1000, state and local governments would be allowed to promote equal opportunity in employment, education and contracting for people of color, women, people with physical disadvantages and honorably discharged veterans. The available tools would be recruitment, outreach, training and the like, but not quotas or preferential treatment, which is selecting a less qualified candidate based on a characteristic such as race or gender. The initiative also creates a governor’s commission of diversity, equity and inclusion. Backers submitted a record 395,938 signatures to qualify I-1000 as an initiative to the state Legislature.

Initiative 1000 rankles, no doubt, because it amends I-200, passed in 1998 by 58 percent of voters to ban discriminating against or granting preference to individuals or groups on any basis. Initiative 200 essentially froze in place the systems and advantages that created enormous wealth and privilege gaps enjoyed by white America. Saying everything is the same for everyone (aka, “equality”) going forward is tantamount to giving the hare a 75-yard head start in a 100-yard dash against the tortoise, representing in this case people of color, women and other disadvantaged people after centuries of oppression and systemic bias.

The mixed-messaging tactics of the opposition was illustrated by a large group of Chinese Americans, most wearing matching white T-shirts with circle-backslash (no) I-1000, also saying the initiative constituted “systemic racism.” Their presence pulled back the curtain on a growing national movement of weaponizing recent Chinese immigrants for conservative causes. The subgroup is aliased as “Asian Americans,” as if a slice of society that includes 50 ethnicities, 300 different languages and centuries of discord could be characterized as a monolith, not to mention spoken for. Their characterization of I-1000 as “government-sanctioned bigotry,” and “a 21st century version of the Chinese Exclusion Act” (which, by the way, was an immigration ban), proposed by “bad guys,” is out of step with the views of most other Asian American groups.

The familiar tactic of fomenting division between groups of color has the intention of driving a wedge in longstanding alliances. Ben Henry, the executive director of APACE (Asian Pacific Islander Americans for Civic Empowerment), an organization founded to fight I-200, decried the strategy, saying, “We are not your wedge.” The performance of the white-clad, anti-1000 contingent really had the backfiring impact of rendering the rhetoric of the old I-200 brain trust, Tim Eyman and John Carlson, as pretty disingenuous.

“When a movement that has to use fear and intimidation in order to get what they want, how worthy is it?” said Eyman, the initiative king. I-1000 is “inherently divisive,” said Carlson, a conservative columnist who writes regularly for Crosscut and radio talk-show host who led the I-200 campaign and once ran for governor. “It’s wrong. It’s nothing but diversity by discrimination.” Ah yes, the reverse discrimination argument.

Initiative 1000 backers — which included former governors Dan Evans, Christine Gregoire and Gary Locke; local big businesses such as Amazon, Microsoft and Vulcan; politicians; business associations; and education leaders — mostly stressed a verifiable nosedive in business and education opportunities for affected groups since I-200’s passage. Among the most egregious: Nonwhite- and women-owned businesses have lost the opportunity for contracts totaling $3.5 billion during the past 20 years, per many of the state agencies, and Black males make up only 1.3 percent of enrollment at the University of Washington. These have contributed to massive economic inequalities, illustrated by the median net worth of households in King and Snohomish counties being $399,000 for whites, but just $90,000 for Latinx, and $23,000 for Blacks. The lack of diversity makes our economy less robust and all of us less competitive globally.

These trends are what we all should fear, not the people, like me, who are impacted most. In my mind, I-1000 doesn’t go far enough. It seeks to level the playing field and be more inclusive, but it does not create equity. For that, we’d need quotas and preferential treatment to catch-up groups — certain African and Native Americans, in particular, whose families have suffered the most from centuries of oppression here — which this country’s power structure has worked for centuries to leave behind.

But I-1000 at least stops the backslide into othering, and our duly elected officials would spare us more division and discord if they enact the measure before the current state legislative session concludes. Otherwise, it will move to the November ballot, where it will be left vulnerable to the manipulation and misleading campaign appeals of opponents attempting to fend off the inevitable impacts of demographic change.

“It’s not radical,” said Marilyn Strickland, the president of the Seattle Metropolitan Chamber of Commerce and former mayor of Tacoma, who is of Korean and African American heritage. “It’s not scary and we should not be divided by fear.”