What WA can expect after raising the tobacco age to 21

Here's what happened when other jurisdictions raised the age to buy tobacco, as Washington has decided to do. 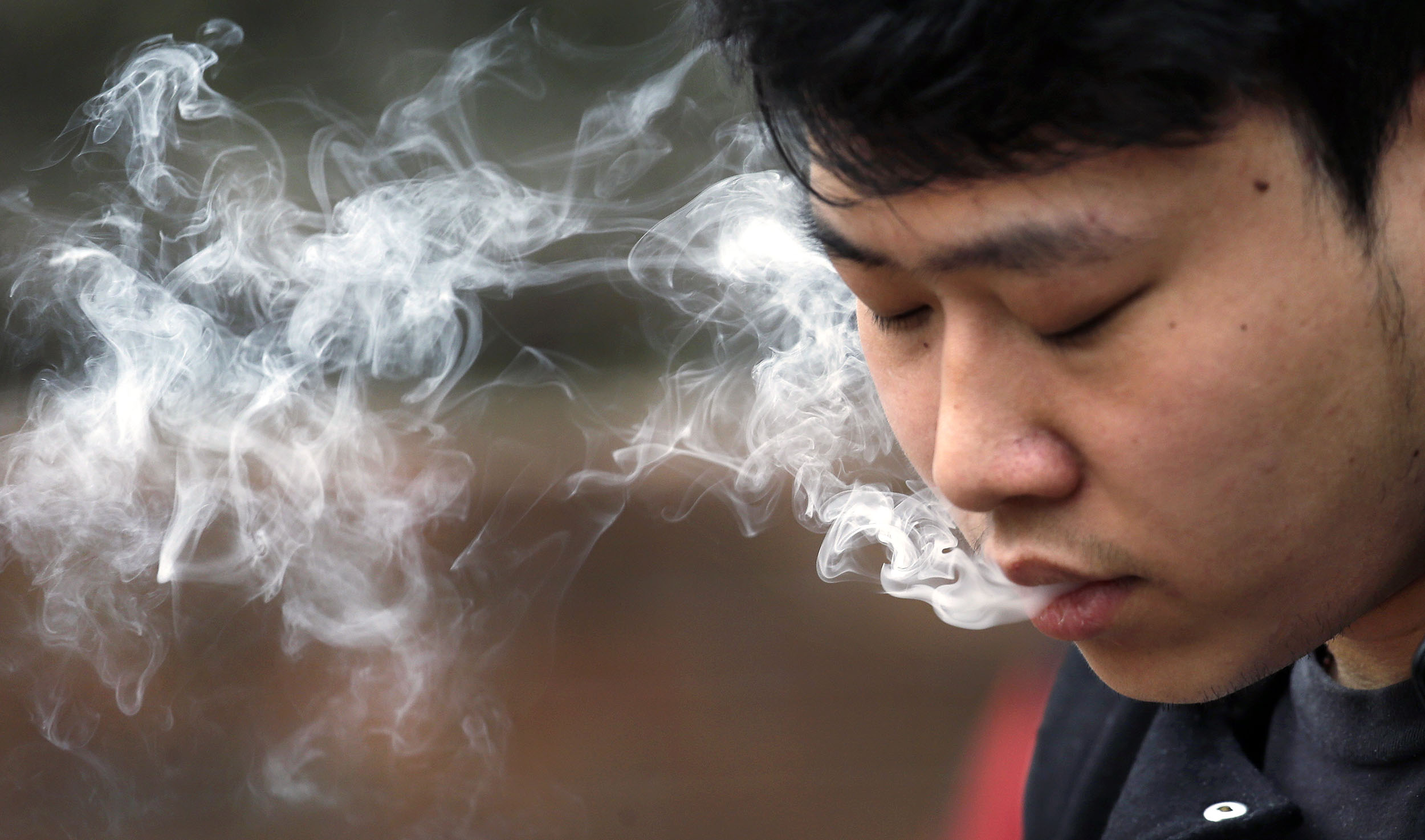 In this photo taken Jan. 7, 2016, David Wang, 19, smokes outside during a break from classes at Seattle Central College. A proposal in the Washington Legislature seeks to raise the smoking age to 21. (Photo by Elaine Thompson / AP)

Keeping cigarettes out of the hands of high schoolers is something health advocates have been working on for years. Soon, they think, they’ll be closer to achieving that goal in Washington state because of a new law that will raise the legal age to buy tobacco from 18 to 21.

Beginning in January, Washington state will limit sales of tobacco and vapor products — including e-cigarettes — to people 21 and older. Democratic Gov. Jay Inslee signed the legislation into law last week.

“This bill today is going to save thousands of lives in the state of Washington,” said Inslee, citing statistics about the number of deaths associated with smoking.

Washington isn’t the first state to raise the minimum age to buy tobacco. Several other states have passed laws establishing 21 as the legal age, including California, Oregon, Maine, Massachusetts, New Jersey and Hawaii. In addition to Washington, a few other states have embraced the policy this year — among them, Illinois, Maryland and New York. Dozens of cities have adopted it, too.

The whole idea is to keep teenagers from trying cigarettes, so that, ideally, they’ll never start smoking.

Research suggests it can work. About 95 percent of people who later become daily smokers first tried cigarettes before they turned 21, according to government surveys.

A 2015 report from the Institute of Medicine predicted that raising the legal tobacco age to  21 would reduce cigarette use among 15- to 17-year-olds by about 25 percent. The same report used simulations to determine that raising the smoking age to 21 could reduce overall smoking rates by 12 percent.

Some of that simulation and modeling, however, is being bolstered by real world experience on the ground. Here’s what has happened so far in a few places that beat Washington to the punch in limiting tobacco sales to those 21 or older.

In 2005, Needham, Masschussetts, became the first town in the United States to raise the age to buy tobacco to 21. In the four years after implementing the policy, Needham saw a 47 percent decline in the rate of smoking by high schoolers, according to a 2014 article published in the American Journal of Public Health.

Nearby communities that didn’t ban tobacco sales to those under 21 didn’t see the same results.

“Almost nothing in public health works that well,” said Dr. Jonathan Winickoff, a professor at Harvard Medical School and the lead author of the study.

Winickoff said part of the secret to Needham’s success was strong enforcement of the law. For the policy to work, 18- and 19-year olds in particular need to be cut off from accessing tobacco, he explained. That’s because those older teens are the ones most likely to distribute cigarettes or other tobacco products to their younger friends — particularly if they still attend the same school.

“If retailers sell to people under 21, the law is undercut,” Winickoff said.

In Needham, the first time retailers sold tobacco to someone under 21, they were fined and had their license to sell tobacco suspended for a week. Those penalties increased with subsequent offenses.

Winickoff said Needham's regulators didn't have to go as far as revoking a retailer's license permanently. After a couple of stores had their licenses suspended, "everyone cleaned up their act and stopped selling to kids," he said.

Here in Washington, the law Inslee signed last week doesn’t specify the penalties retailers will face if they break the new law. The Liquor and Cannabis Board will flesh those details out through a rule-making process in the coming months, a spokesman said.

California’s law has been in place since only June 2016. But even in that short time frame, raising the tobacco age to 21 seems to have reduced teenagers’ ability to buy tobacco easily.

A recent evaluation of the new law looked at what happened when California regulators sent teenage decoys to buy tobacco as part of compliance checks. After the 21-and-over law took effect, violations involving retailers selling to teens under 18 dropped by about 45 percent.

“Seeing the reduction in youth sales, or reduction in violations of the law — that’s certainly a big positive,” said Jeffrey Hardesty, research program manager at the Institute for Global Tobacco Control, which is within the Johns Hopkins Bloomberg School of Public Health.

It’s too soon to know how much the law has changed rates of teen tobacco use, Hardesty said. But any reduction in youth tobacco sales, as California’s numbers suggest, should yield at least some short-term benefits, he said.

Hawaii's law took effect about six months earlier than California's, at the start of 2016.

New data from the state's Youth Risk Behavior Survey show a drop in teen smoking rates after the law took effect. Between 2015 and 2017, the share of high school students who smoke declined from 9.7 percent to 8.1 percent. That's more than double the decrease reported from 2013 to 2015.

New York City, which raised the tobacco age to 21 in 2014, also reported decreases in youth usage in surveys. Yet a more in-depth study did not find that those reductions outpaced reductions in other cities.

The New York City study concluded it is possible "that impacts in NYC will only be realized after a longer time period," or that the policy might have a greater impact in jurisdictions with lower tobacco tax rates. (The combined state and local tax on a pack of cigarettes in New York City right now is $5.85, nearly double what Washington imposes.)

Cathy Callaway, the state and local campaigns director with the American Cancer Society's Cancer Action Network, said she thinks data on the public health benefits of raising the smoking age will become clearer over time. Her organization has urged more states to adopt the policy based on the research that is already available, however.

"I think we need additional science," Callaway said. "And certainly, having more laws passed this year will help build that science base."