Why it's so hard to write in prison 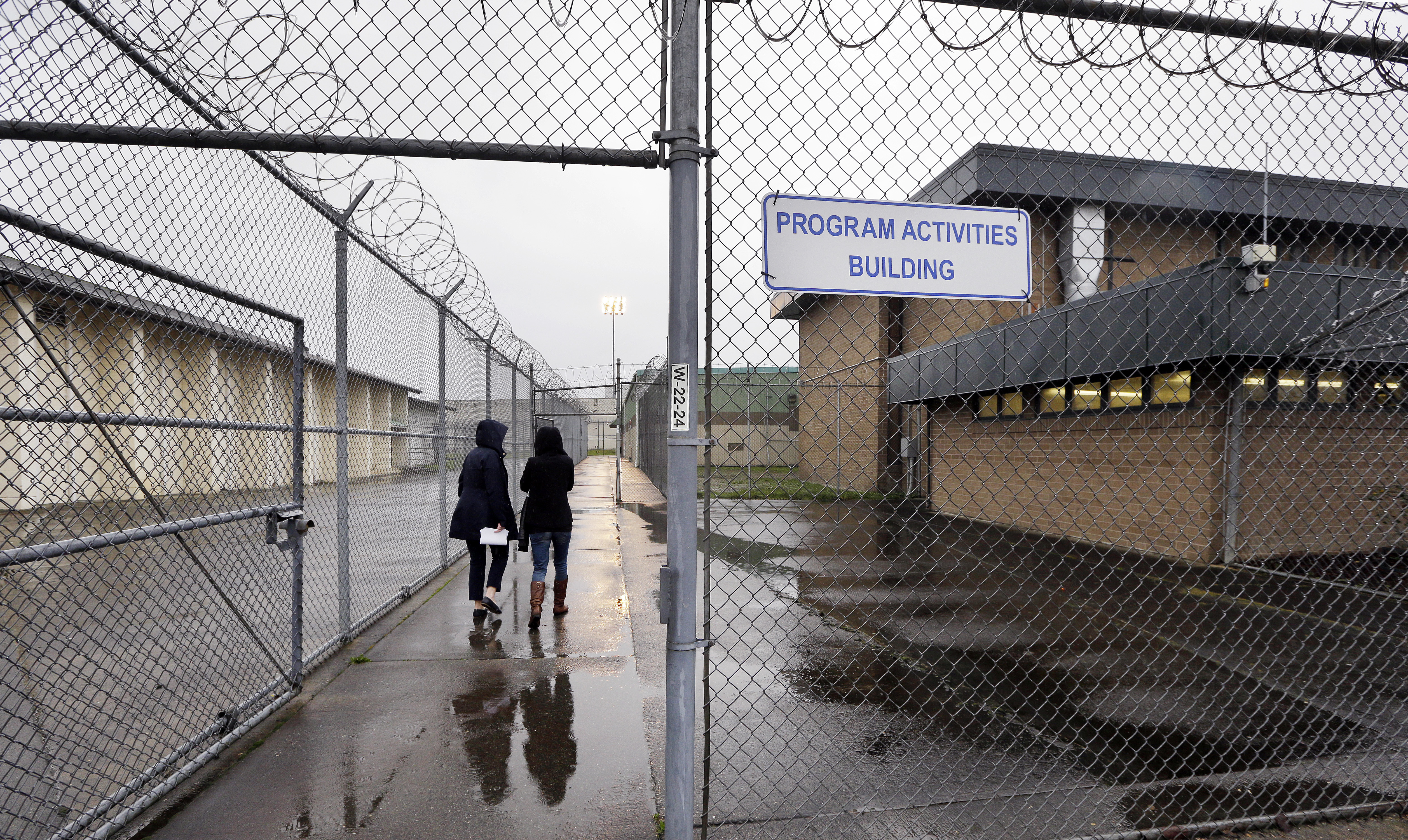 In this photo taken Thursday, Jan. 28, 2016, staff members head past razor wire-topped fences and into a building hosting a University Behind Bars program at the Monroe Correctional Complex in Monroe, Wash. For many years federal government dollars were prohibited from being used for college programs behind bars. (AP Photo/Elaine Thompson)

Writing in prison isn't the same as writing outside. A prisoner exists beneath an aggravated form of disenfranchisement behind these walls. It's a form of exclusion that's likely unfathomable to an unincarcerated writer.

I don't have a computer: no access to the internet, no way to run an online search.

My ability to reach outside prison — in the minimal, monitored, and restricted ways I'm permitted — is limited by how much money I have, or don't have, in my prison account. Phone calls cost me more than they cost an unincarcerated person. And I don't have access to a phone directory

Letters also cost me more to mail than they cost an unincarcerated person. And the pennies I make per hour from my prison job y provide me barely enough for soap, deodorant and toothpaste.

I'm isolated. I'm separated from society not just by the wall that encloses me within the prison, but by the number of decades I've been here. Like the majority of prisoners with a long-term sentence, I was sent here when I was young. I've been in so long now that trying to remember what it was like outside prison is like trying to remember a dream I forgot long ago. I don't have a single unincarcerated adult memory. I know few people on the other side of that wall.

When the Washington state Department of Corrections recently imposed a ban on most used book donations to prisons, Crosscut reached out to find a writer in the state prison system. The state has since lifted the ban, but cautioned nonprofits about its concerns with contraband being imported through books. Here’s the view of Arthur Longworth, convicted for the 1985 killing of Cynthia Nelson, on the value of books and the struggle to write and think freely while incarcerated. His writing has been used in course curriculum at various universities, including the University of Washington.

I don't have access to a historical archive. My access to public records is virtually nonexistent; I can neither request nor receive them in electronic or digital form. The cost of physical copies is beyond my ability to pay — a copy of my own prison file would run me more than a grand. And I'm prohibited from possessing records of any prison official. If I were caught with something like that, I'd be in the Hole longer than if the guards were to catch me with a gun.

I don't often come across a newspaper. And never one less than a week old. Sometimes it's hard to find a dictionary with all its pages.

What I do have, when I budget my expenditures carefully, are a couple yellow legal tablets whose pages I fill front and back. A handful of pencils I sharpen sparingly so I don't go through them too quickly. And two ballpoint pens: a black and a blue.

I also have the library, which, in here, isn't what an unincarcerated writer would consider a library at all: a single room of mostly beat-up, outdated and moldering books.

Nevertheless, I've read nearly every book in the room. Like the majority of prisoners with a long-term sentence who was sent here when they were young, I entered prison uneducated. I struggled to read at first. But I kept at it — I continued to read no matter what happened around me or to me. In the process, I discovered treasures: works by writers who inspired and motivated me, like Solzhenitsyn’s One Day in the Life of Ivan Denisovich, Allende’s De Amor y de Sombra and Fowler’s Modern English Usage. These are writers through whose eyes and ideas I learned that the world, and my obligation to it, is more than I could ever have imagined when I committed my crime as a young person in survival mode on the street.

Through these writers I learned that we all have the ability to be better than the worst thing we’ve ever done.

I found no shortage of books about prison and incarceration in the library. Works written by academics, attorneys, historians, journalists. There are books and articles by current and former prison officials, all crowded onto three shelves of an outsized section. And more books are squeezed onto the shelves each year. I'm not sure if the number of books related to incarceration is because the library is in a prison, or if it reflects the inordinate role prison has come to play in the world outside the wall.

Either way, I'm conscious that there are no books about prison on the shelves written by any modern-day incarcerated writer. I know it's not the fault of prison librarians. I suppose it's because some Department of Correction officials realize that barring the works of incarcerated writers lessens the legitimacy and voice of works that are afforded space on the shelves. Unfortunately, librarians aren't the ones who decide which books are and aren’t allowed in prison.

When the Washington state Department of Corrections recently banned used books from entering the prison, I thought about Jeremiah Bourgeois, who was 14 when he committed the crime that earned him a sentence of mandatory life without parole. As Jeremiah matured in here, he educated himself by books he requested from Books to Prisoners in Seattle. Over the years, the organization sent Jeremiah countless used textbooks that he studied from cover to cover. Now, at age 40, Jeremiah has written for law journals across the country and is currently a columnist for the Crime Report, where he writes about criminal justice. And, since the U.S. Supreme Court decided that sentencing a juvenile to a mandatory life without parole sentence is unconstitutional, Jeremiah will at some point be released from prison. I can’t help wonder who he’d be today without Books to Prisoners.

When I first felt the impulse to write, I was dissuaded by my lack of formal education and any model or standard of an incarcerated writer to shape my writing after. So I suppressed the urge. I pushed it back down where it came from, the place inside me where I keep everything I've seen and experienced inside these walls. A place made up entirely of scar tissue.

When the compulsion to write rose into an irrepressible tide and poured forth from the scar, words began to spill out on paper of their own accord. I couldn't have stopped them if I tried. When I saw my experience, and the experience of those around me, woven into the fabric of words, I quit worrying that I'm not supposed to know how to write. I went with it.

Comparing the words I write with the words of the writers on the shelves, I discovered my edge. An incarcerated writer who writes at any length about the institution in whose belly he exists channels an experience distinct from an unincarcerated writer. That is, I have the ability to articulate not just what prison looks like, but how it feels. Even when an unincarcerated writer is granted access to enter prison, it isn't the same because his exposure is mitigated and not without respite. He isn't subjugated by the institution in the same way I am.

I know the milieu better than anyone. I know the regimen, chaos, attrition and every other force the institution exerts on me and those around me. I know how to navigate the underground networks of prison, as well as its economy. I've developed strategies and relationships that enable me to move between the contentious lines of division into which people separate themselves inside the walls. That is, into the categories of race, gang, politics, religion, nationality and crime — which are really just the same ways that people divide themselves outside.

Most prisoners trust me. I know that every group in the prison coheres around a culture of oral history preserved and carried forward by the elder, respected members of the group. I've earned trust by listening to their stories. And because they know that my circumstances have never been any less miserable than theirs.

I take notes in a coded shorthand that only I can read. And I smuggle the notes like contraband — because that's what they are. If I'm caught with them, guards will take me to the Hole and I'll be "validated" as a gang member in a file I'm neither allowed to see nor dispute. At some point, I might get out of the Hole, but I'll never get out of that file.

I discovered years ago that, despite all I’ve learned, I'm still not free to write what I want about prison. Not as long as I'm in one.

Arthur Longworth is the author of Zek: An American Prison Story.