Why we need history majors to understand our future 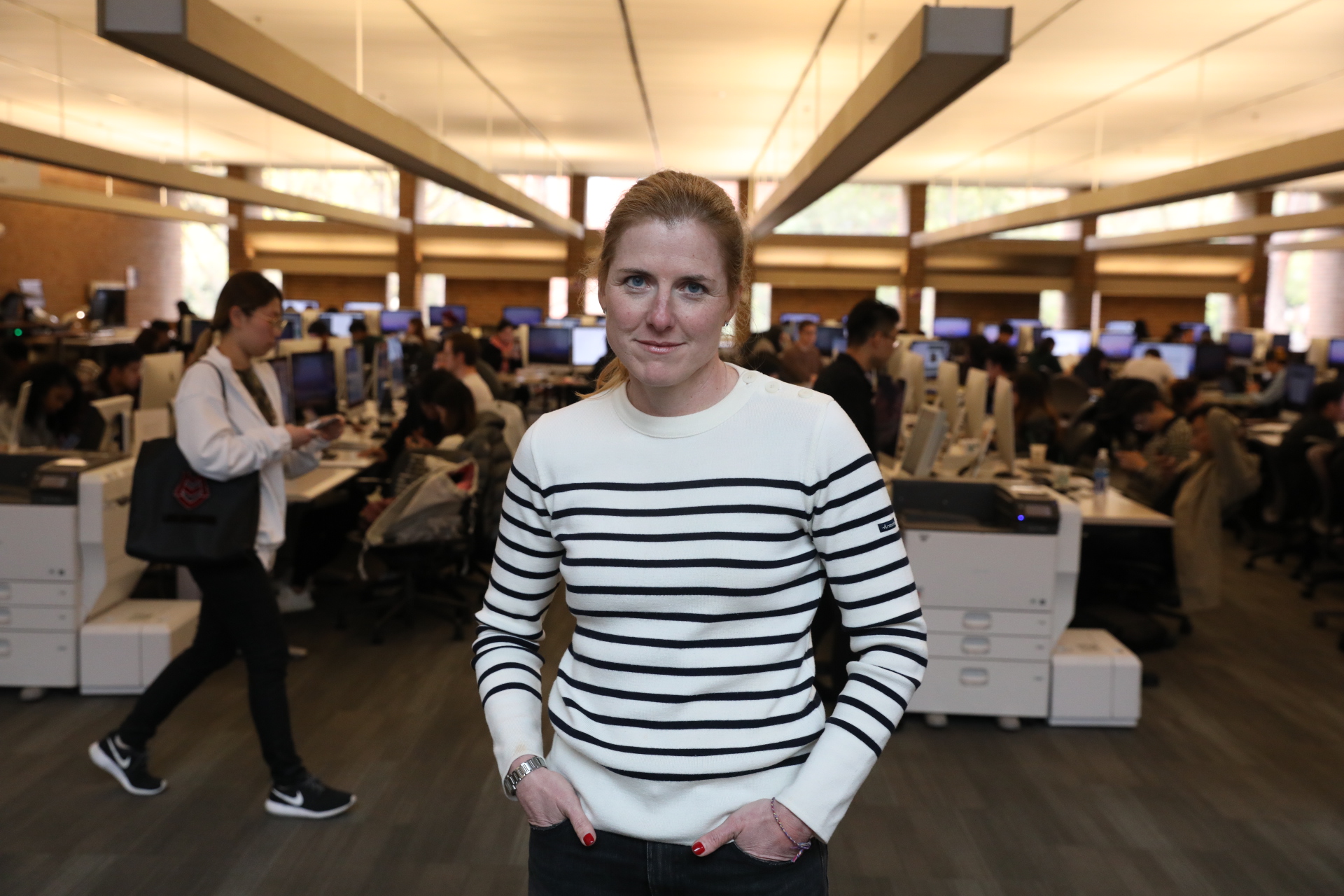 Margaret O’Mara, a history professor at the University of Washington. (Photo by Matt M. McKnight/Crosscut)

“My job these days is looking for silver linings,” says Margaret O’Mara, history professor at the University of Washington.

History and historians, if you haven’t noticed, are facing an existential crisis. It’s not just a problem of Seattle’s trashed gargoyles or threatened music venues. It’s the profession of teaching history, it’s the curriculum, it’s funding. We’re in a time of great “precarity” in academia, O’Mara says regarding the humanities.

We’re having coffee in Madrona after both returning from the annual conference of the Organization of American Historians in Philadelphia, an organization where historians from colleges, universities and high schools, as well as independent researchers, come together for a deep dive into the latest in American historical research. On that score the field is thriving with new and original work on race, class, equity, urban rethinking and the impact of tech.

But throughout the conference, there was an undercurrent of worry about funding, the elimination of tenure-track jobs and the declining number of history majors. There’s been a 33 percent decline in history majors since 2011, a precipitous dunk since the Great Recession, described by Smithsonian magazine as an “exodus.” It’s even worse at the UW. According to a story by Katherine Long of The Seattle Times, history majors at the U Dub are down 46 percent since 2008. Liberal arts and humanities majors generally are also in decline nationally and here.

Call it a stampede to STEM, up 50 percent on the UW’s campuses. With the cost of college high and the demand for tech skills booming, liberal arts education increasingly is being muscled aside by the idea that to survive in the future economy, one must have a science or engineering degree. Parents of college students are insisting their kids get on the STEM track. “Parents want return on investment,” O’Mara says. “Your major has become your destiny.”

This is a change from the era when a liberal arts education was seen as preparing one for anything. “Now, it’s the professionalization of everything,” she says. Higher ed, it seems, is becoming the new vocational-technical school.

O’Mara is a good person to talk to about this because she has her feet in two worlds — history and technology. She’s the Howard and Frances Keller Professor of History at the UW, with a background in politics (she worked in the Clinton administration before going to grad school) and she’s a historian of high tech. Her new book, due in July, is a history of the Silicon Valley, The Code: Silicon Valley and the Remaking of America. An earlier book, Cities of Knowledge, helps explain why some tech-ambitious cities have flourished and others have not.

In a sense, the silver lining she offers is this: As in tech, disruption creates opportunity. Historians are struggling in traditional quarters, there’s no question about that. And we need to do a better job of supporting their work and commitment. Indeed, the STEM tide might be sweeping many students away from their true passion in life.

But the history profession itself is being remade in positive ways — ones that may appeal to younger people in the long run. In a time of Donald Trump, historians are increasingly being sought out to provide context and background as pundits and op-ed writers. Cable talking heads are no longer mostly political economists, sociologists and party and political partisans. Our precedent-stomping times need explanation, perspective.

In the past, popularizing could jeopardize an academic’s career and derail the tenure track. Catering to wide audiences and popular topics has long been deemed a negative in traditional history departments. Now blogging, podcasting and punditry can meet a public demand for content and carry less risk for academics, while creating the potential of bigger audiences.

Professors are breaking out of the academic press and getting more attention from the commercial trade press: History is selling to an eager audience. Remember the best-seller by Seattle’s Erik Larson, Devil in the White City? Its success turned heads in trade publishing. History-rooted books are also having a huge impact on consciousness, policy and culture. A book cited at the conference was Michelle Alexander’s best-seller about mass incarceration called The New Jim Crow, which is an example of the importance of historical perspective reframing debate. Alex Star, the top editor of Farrar, Straus and Giroux, said that mass incarceration and criminal justice reform are now hot-selling topics in the book world. And, hey, Ron Chernow’s biography of Alexander Hamilton became Lin-Manuel Miranda’s hit hip-hop musical!

Another silver lining is that the business and tech worlds need people with liberal arts backgrounds. O’Mara cites Nike’s recent “Lost Cause” campaign, which was pulled because historians pointed out that the slogan has strong ties to romanticizing the Confederacy and white supremacy. “Shoes for the Confederacy?” one historian asked. Nike could have saved itself money and a Twitter-bashing by having a history major in the room when that campaign was proposed.

Tech offers no better example of non-STEM genius than Steve Jobs, the tech world’s most “disruptive innovator.” He was not an engineer but understood design, people and markets. He specifically credited a calligraphy class at Reed College in Portland with having a profound impact on the Mac’s interface.

Even more crucial, STEM grads have no guarantee their training will result in lifelong, well-paying jobs. O’Mara mentions research that shows that over time, people with liberal arts bachelor’s degrees do better economically than, say, molecular or wildlife biologists. Not all STEM jobs are a guarantee of a big or better income.

Robotics and AI (artificial intelligence) will replace many human jobs in the near future, including some engineers, coders and other technicians. “When the robot overlords come, what jobs will be replaced? Many STEM jobs,” O’Mara predicts. “What are the things that only we can do?” The tech world needs oversight, creative thinkers, marketers, managers, communicators, people who understand human systems and can check algorithms for racial bias. In short, the world is going to continue to need people who have a broad-based liberal arts education. The STEM path is no insurance against change.

History — yes, history — tells us that tech towns ride boom and bust cycles. I ask O’Mara to look ahead a bit, as a historian. Seattle is riding a tech boom and its long tail. Seattle and Silicon Valley have reinvented themselves through boom and bust times. Indeed, busts have advantages. Seattle emerged from the 1970s Boeing bust with a more diverse economy and grassroots cultural and political reform. O’Mara was living in Silicon Valley when the dot-com bust hit. “There were pink slip parties” she says, as people by the thousands were laid off. But a lot of valley tech wealth survived the downturn and was reinvested in startups. New ventures were able to take advantage of an “excess capacity” of engineering and management talent. The Googles bloomed.

The key to survival for the host communities is to be a place people don’t want to leave. That happened in Seattle in the ’70s, in the Valley of the ’00s. Many Bay Area folks are now moving to Seattle because San Francisco has become so expensive. Quality of life, urban character and affordability are hugely important. Our contrast to the expensive market and ultracutthroat, bro-driven business style of the Valley is an asset. “Keep Seattle weird,” O'Mara jokes. We are entering a period when tech wealth from Microsoft and Amazon is phasing into being multigenerational and could be critical to surviving the next bust phase.

Crafting communities that are resilient, unique, where people want to stay is not for STEM folk alone. STEM and non-STEM people pursing their true passions will be essential to getting us creatively through our next economic cycle. “How do you appreciate the opportunity of the reset button?” O’Mara asks. Historians — and other liberal arts majors — will help us find the way.