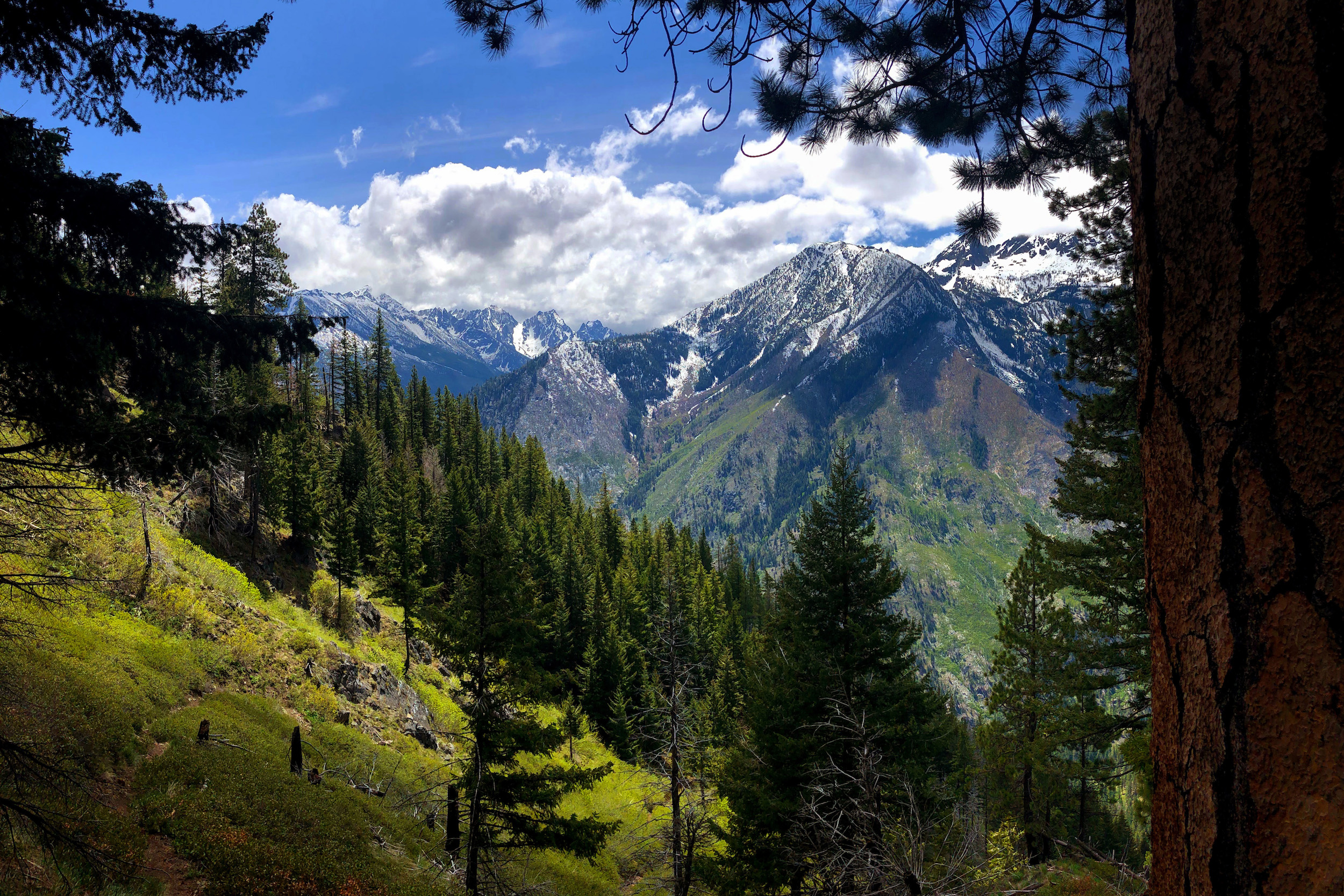 The Alpine Lakes Wilderness Area's Fourth of July Creek Trail pictured on May 18 at Leavenworth. (Photo by Sarah Hoffman/Crosscut)

On Saturday a gaggle of folks, mostly Republicans, hiked up the Ingalls Creek Trail in the Cascades into the Alpine Lakes Wilderness area, led by former Gov. Dan Evans. Evans is the former three-term Washington Republican governor (1965-77) and later U.S. senator, who championed wilderness and the outdoors. He is also the man who in 1976 talked President Gerald Ford out of vetoing legislation creating the wilderness area.

Evans had meant to bring the book with him, but left it at home. But the governor, a former Boy Scout, called an old member of his troop living in Maryland who was able to quickly bring a copy of the book to Evans’ D.C. hotel room for the presidential show-and-tell. The Boy Scout motto is “Be prepared,” and, with the help of his ex-trooper, Evans certainly was.

A 15-minute appointment stretched to 45 minutes as the Republican president couldn’t stop gazing at the images in the book Evans brought. Ford, like the governor, was an old Eagle Scout whose interest in the outdoors was fed by that experience. The president was smitten, and he signed the bill, creating the wilderness area, land of more than 700 lakes.

So this is Evans country. And at age 93 he moved up the trail with the confidence of a much younger man, dressed in a blue Seattle Marathon shirt, tan hiking shorts, a National Geographic baseball cap and a pair of walking poles.

Evans and his trail companions were attending the 50th anniversary meeting in nearby Leavenworth of the Cascade Conference of the Mainstream Republicans of Washington. This is the generally non-Trumpian wing of the GOP: honest, civil, open-minded and, on some issues, even progressive. Climate change is not a dirty word here, for example. Panels addressed such subjects as women in leadership, bipartisanship, homelessness and tribal relations.

During the morning sessions, two young men who later joined the hike reflected how Evans the elder is still influencing younger people in politics.

One was France Hoang, a West Point grad and lecturer who served as an Army Ranger in Afghanistan and now has a start-up in Washington, D.C., that helps nonprofits with artificial intelligence technology. He gave a talk about how, after the Vietnam War, then-Gov. Evans’ welcoming of Southeast Asian refugees like Hoang inspired him. Some 30,000 refugees came to Washington state alone, and Hoang came to America as a toddler with his family. 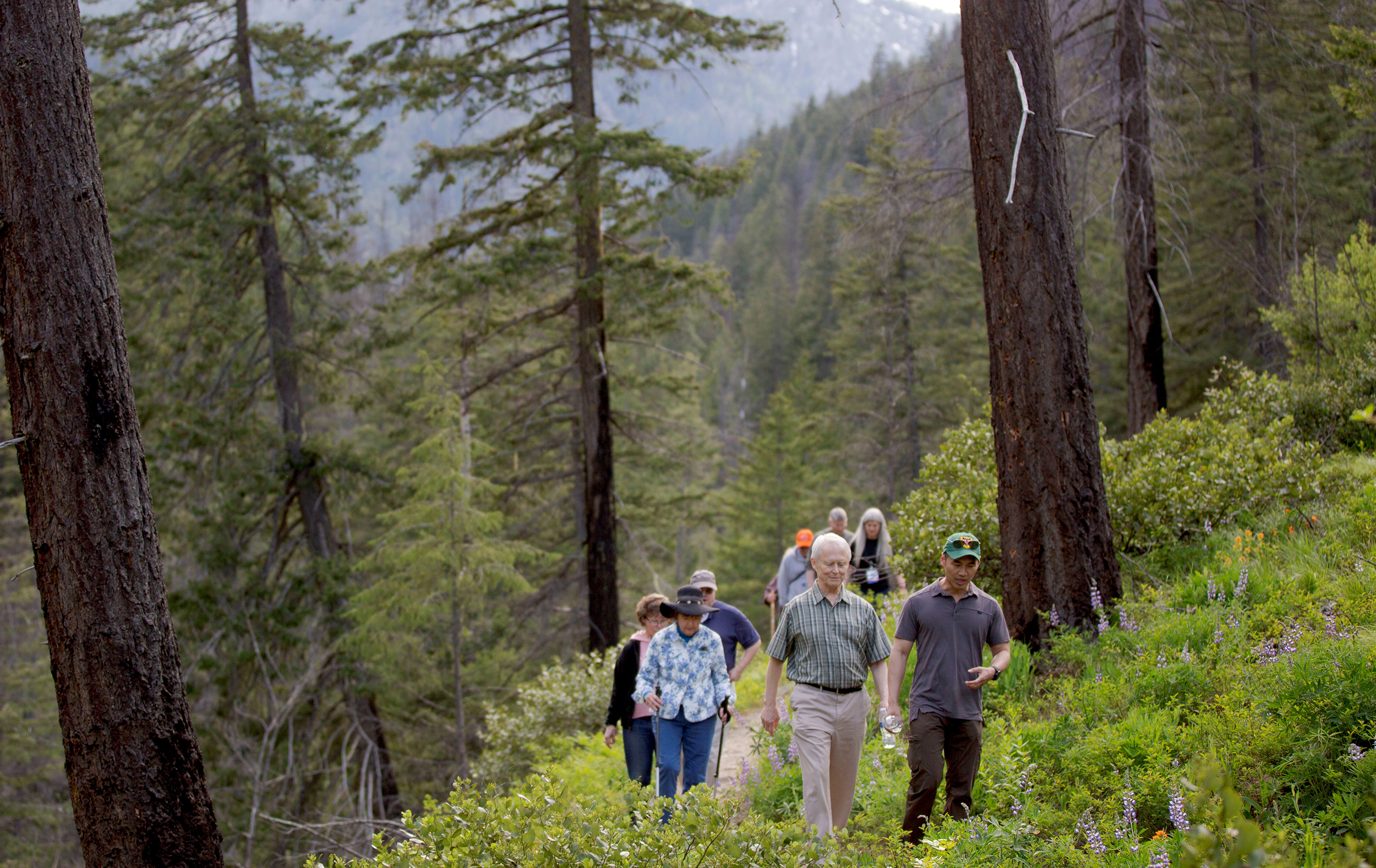 France Hoang, in green cap, and fellow hikers head along the Ingalls Creek trail during the Mainstream Republicans of Washington Cascade Conference in Leavenworth on Saturday, May 18th. Dan Evans was ahead of them on the trail. (Photo for Crosscut by Jack Lambert /JML Media)

France Hoang, in green cap, and fellow hikers head along the Ingalls Creek trail during the Mainstream Republicans of Washington Cascade Conference in Leavenworth on Saturday, May 18th. Dan Evans was ahead of them on the trail. (Photo for Crosscut by Jack Lambert /JML Media)

Hoang pointed out that bringing refugees into the U.S was not popular at the time, polling at only 36 percent support. Still, it was the right thing to do. President Donald Trump, in contrast, is now trying to deport some of these people to places like Vietnam and Cambodia, sometimes for violating laws in their youth such as marijuana possession.

Another Evans-inspired hiker on the trail was Benji Backer, a University of Washington student from Wisconsin who founded the American Conservation Coalition, a group of college and graduate student conservatives who are pushing the GOP to embrace environmentalism. At a luncheon not long before the hike, Backer received the Dan Evans Awards for his work on this. His group embraces land and wildlife stewardship, clean energy development and the fact that climate change is real. Backer has urged bipartisan efforts on salmon recovery, and his group believes “the private sector is the strongest force in fighting climate change.” He learned of Evans’ career when he was still a teenager in Wisconsin, and now the former governor is a mentor. Both want to lead the GOP out of the environmental wilderness of denial and exploitation.

Evans’ views on the environment and wilderness protection aren’t the only things that still have him bucking party orthodoxy. In addition to his past advocacy on refugees, he wants to see more done on diversity. At the same luncheon where awards were presented, Evans spoke to the audience about his support for I-1000, the new law passed by the Legislature to reinstate affirmative action without quotas in Washington. He told his fellow Republicans not to rush to repeal it. “Calm down,” he said. He views it as a chance to broadly increase opportunity in the state. He recognized that there were people at the luncheon who disagreed with him, but he asked that the law be given a chance to work. We are used to politicians trying to exploit fears rather than trying to calm them. Evans comes from a time and place where cooler heads could still prevail. A political climate change would be welcome.

His approach is surely nourished by his love of the wilderness and a lifelong enjoyment of the natural world. As we walked along the Ingalls Creek Trail, wildflowers were blooming. The creek gushed in the valley. Parts of the trail showed signs of long recovery from an old fire — blackened trunks of still-living Ponderosa pine were a testament to resilience. Talk of politics faded away, replaced by talk of past hikes and Boy Scout outings and how and when his companions were first inspired by the Northwest’s mountains and forests. Perhaps if a wilderness hike could be part of every political gathering, the world would be better off. 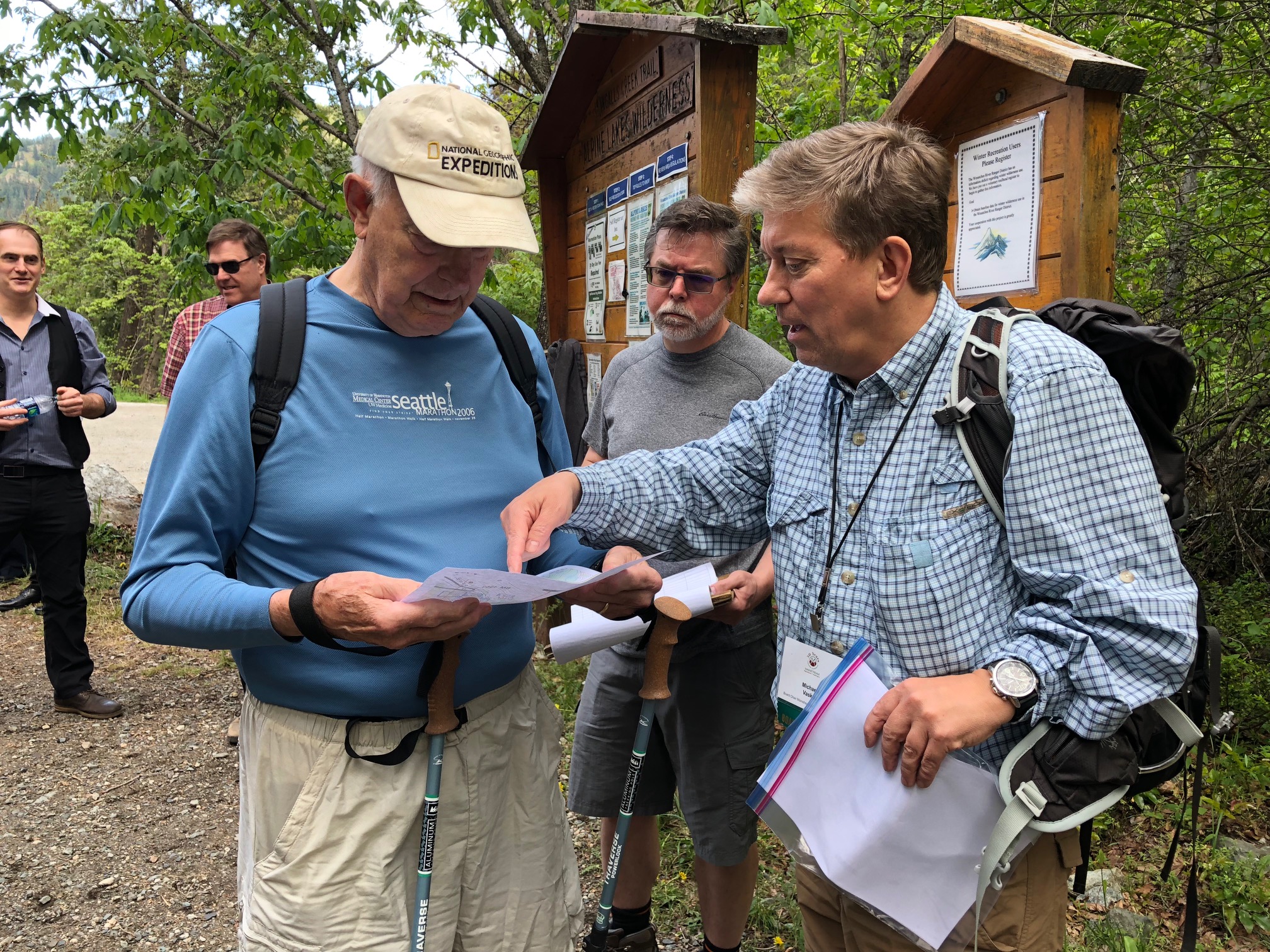 Former Gov. Dan Evans, in blue, prepares for the start of a hike into the Alpine Lakes Wilderness area with Mike Vaska, chair of the Mainstream Republicans. (Photo by Knute Berger/Crosscut)

Former Gov. Dan Evans, in blue, prepares for the start of a hike into the Alpine Lakes Wilderness area with Mike Vaska, chair of the Mainstream Republicans. (Photo by Knute Berger/Crosscut)