Annual count of homeless people in King County goes down, a first since 2012

But officials aren’t celebrating, pointing to the 11,199 people still living without permanent shelter and another study that shows the number may be higher. 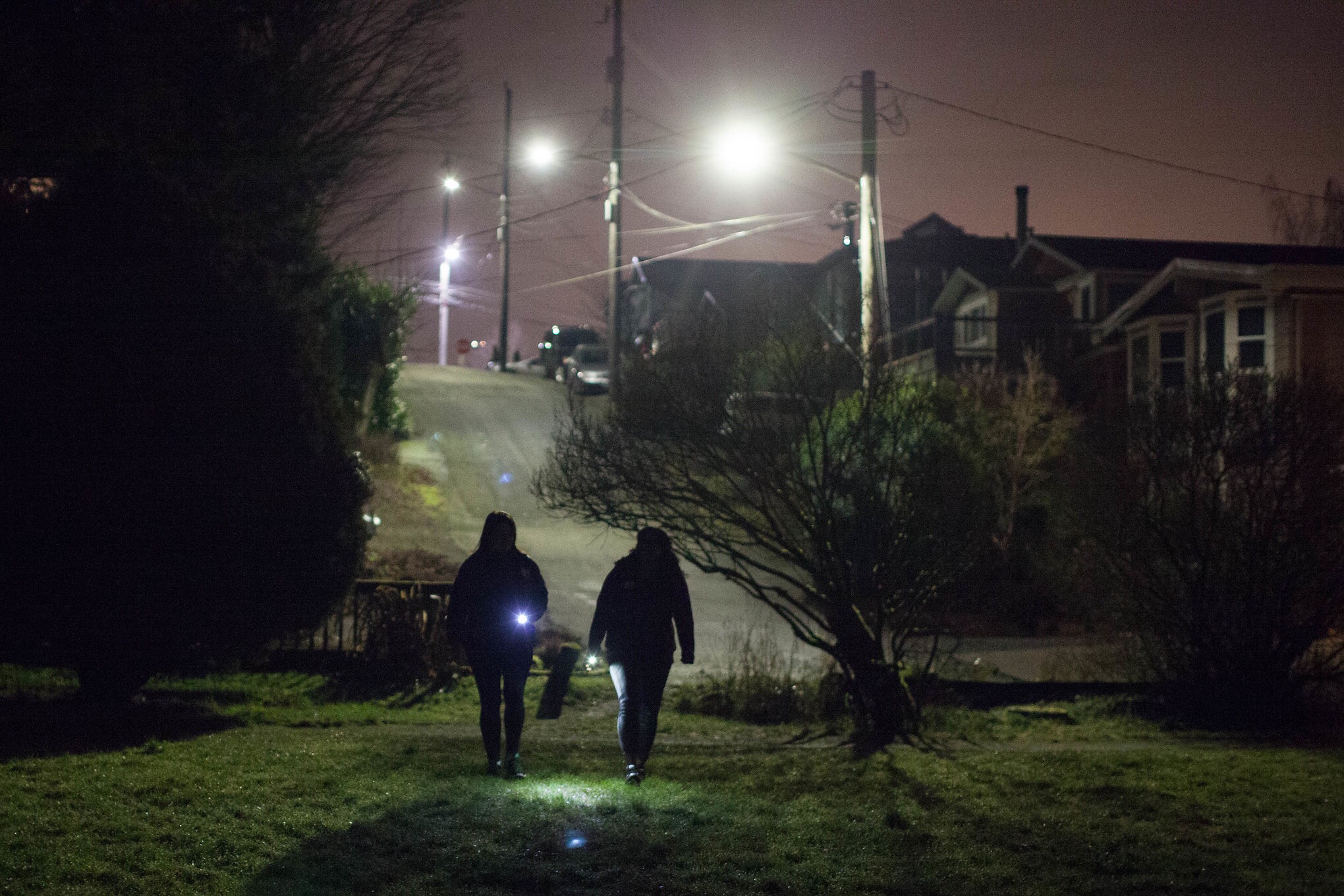 In this 2017 file photograph, Michelle Bretz and Dear Garcia-Stubbs, both childcare providers by day, search Dahl Playfield in Roosevelt District for Seattle's homeless population during 'Count Us In', King County's annual qualitative survey of people experiencing homelessness across the county, during the early morning hours of January 27, 2017. The count occurs each year in an effort to monitor the ongoing homelessness crisis across King County. (Photo by Matt M. McKnight/Crosscut)

For the first time since 2012, the annual snapshot tally of people living on the streets or in shelters in King County showed a decline from the year before.

This year’s count of 11,199 people — as reported by shelter operators and volunteers counting tents and vehicles in the middle of a single night in January — amounts to an 8 percent overall decrease from 2018. That number is also lower than the 2017 tally.

Overall, veterans, adults, and youth and young adults all saw a decline.

As has been the case in every count, people of color are still vastly over-represented in the county’s homeless population. This year’s numbers found a stunning 1,161 people of American Indian or Alaska Native descent on the streets or in shelter — more than 10 percent of the total count, even though Native people make up less than 1 percent of the population. That’s a huge increase from last year’s count, which had the group at 3 percent of the total homeless population — a number that Seattle’s Native communities excoriated as an undercount.

Despite accounting for under 7 percent of the county’s total population, Black people made up more than 30 percent of this year’s count, compared with 27 percent last year.

But while the top-line numbers are encouraging, county and the city of Seattle officials delivered them with caveats about methodology and caution about overreliance on what is a small slice of data collected in the span of a few hours. The oft-repeated results of the count serve as a bellwether for the year and can even dictate local policy, as well as nationally when they’re reported to the Department of Housing and Urban Development (HUD).

Local officials who worked on the count repeated several times Wednesday that, while they were encouraged by certain trends, they were not celebrating.

“There is an overemphasis on this number, not just in our community but across the country,” said Kira Zylstra, acting director of All Home, King County’s largest coordinating agency for homelessness. “So, yes, we want to understand where there might be progress but, again, over 11,000 people that are without a permanent place to be at night means we have a lot more work to do.”

Where there were positive trends, Zylstra pointed to several possible factors. For one, the system has seen an influx of funding, as both King County and Seattle have invested more in combating homelessness and building permanent housing. Among veteran and youth populations, clients receive a more personalized form of service. Zylstra also said diversion programs were functioning to prevent people from falling into homelessness in the first place. And there’s a growing emphasis on coordination between agencies.

Jason Johnson, acting director of Seattle’s Human Services Department, said the progress is mirrored in what the city has been hearing from its contractors. “We're serving more people than we ever have before,” Johnson said. “We're also exiting more people through programs and into permanent housing.”

Still, Zylstra and others sought to deemphasize the count. Instead, they suggested that it be read in conjunction with local data from the Homeless Management Information System, which tracks people entering into and exiting from the provider system over a longer period of time. All Home has launched a new online portal to track that information, nearly in real time.

“What we've now got are two angles that increase our understanding of the issues,” said Leo Flor, director of King County’s Department of Community and Human Services. “And so where we're most focused is where we see both of those sources of information and perspectives indicating the same things.”

That parallel data set further confirms the yearly count misses a significant number of people. According to the HMIS data, over 13,000 households used some service on a single night last January.

When it comes to race, the data sets are closely aligned, offering more credence to reports of disproportionality among the homeless population.

In general, the data shows that while exits from the system continue to rise — because a person was housed or simply stopped showing up — those exits are outpaced by new entries. This illuminates the dynamic nature of the homeless population and has dogged local officials’ efforts at stemming the crisis for years. Progress made is eclipsed by new entries into the system.

All Home is releasing its top-line data at the same time that it is required to submit it to HUD. However, the agency has not yet released its more detailed look at the data. As a result, geographic specifics and information about subpopulations such as people who are living in their vehicles are not yet available. The full report is expected at the end of May.

Reacting to the data, King County Executive Dow Constantine said in a statement that he was “heartened” to see progress and pointed to “regional collaborations” as a driving factor.

The data comes out during a particularly tense moment in Seattle, driven in large part by a persistently visible homeless population and fights over the best method for getting people off the streets. The city and county have been under an official state of emergency since 2015 because of homelessness. With seven of nine seats on the Seattle City Council up for re-election this fall, at a time when the council as a whole is largely unpopular, progress or lack thereof on homelessness will likely dominate the races.

Meanwhile, Constantine and Seattle Mayor Jenny Durkan are working together in an effort to better coordinate the region’s various agencies in responding to the issue, including creating a new consolidated agency.

“We cannot slow down,” Zylstra said.

Correction: An earlier version of this story stated that 2018's count found 23 percent of King County's homeless population was Black. In fact, that number referred to survey respondents. The actual number was 27 percent.