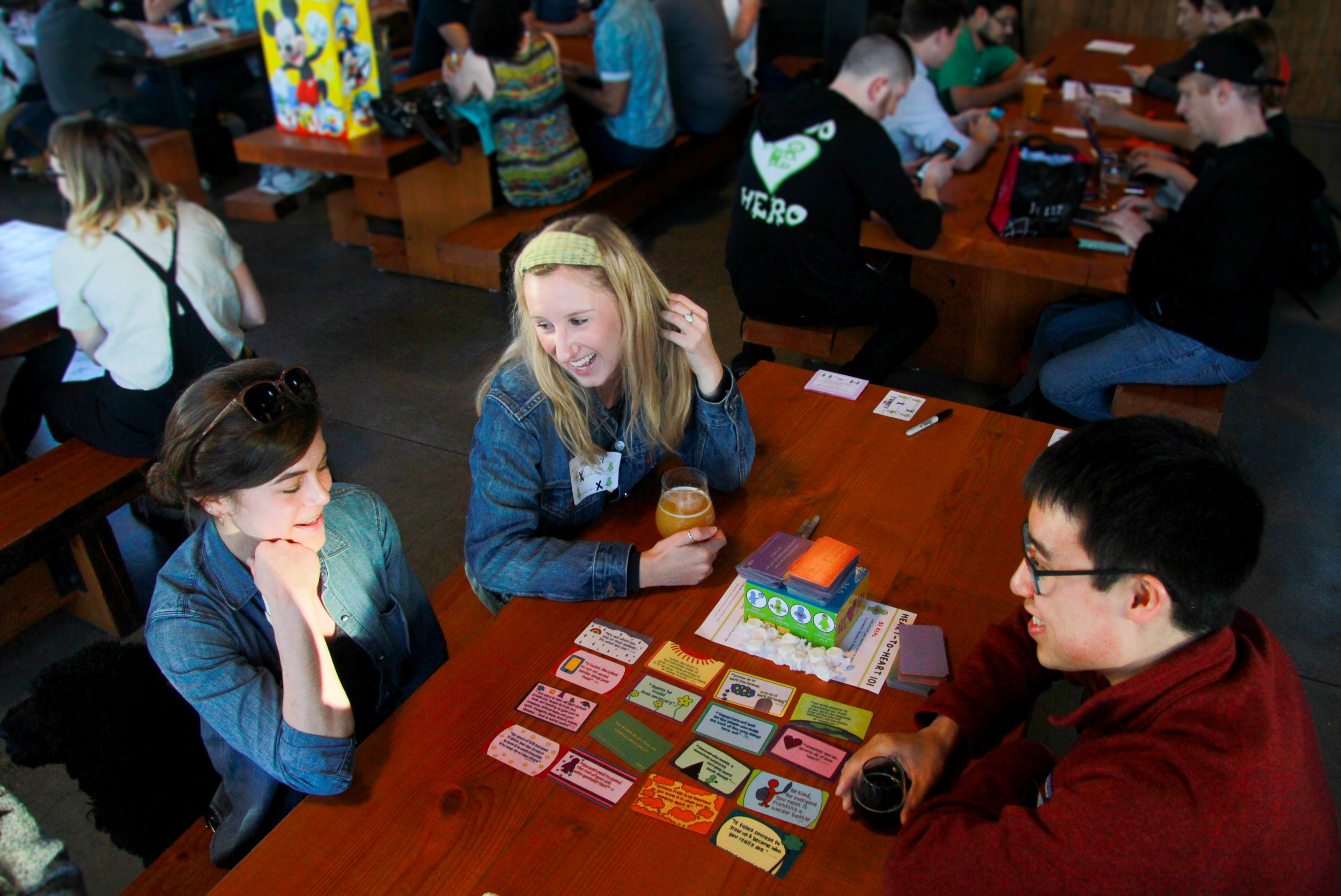 Alia Paget, Audrey Phillips and Andrew Sheng during a 365 Meaningful Conversations event at Optimism in May 2019. (All photos by Margo Vansynghel)

A man sips from a beer absentmindedly, his eyes locked on his laptop, unbothered by the sun gushing through the tall windows of Optimism Brewing’s busy Capitol Hill beer hall on a recent Tuesday. A group plays a Japanese board game. Another is gearing up for a game of the strategic and notoriously complex Magic The Gathering.

At a table close by, five people hunch over a set of 20 very different cards, all with questions on the back: “What does perspective mean to you?” or “How do you make the best out of hard situations?” This game is not about advancing or winning. The goal here is to create conversations and connection among people who have never met before.

With her deck of 365 question cards, wilderness-guide-turned-local-entrepreneur Audrey Phillips wants to change the world one conversation at a time. Since moving to Seattle early this year, Phillips has organized about 20 “365 Meaningful Conversation” events in breweries, restaurants, coffee shops and social spaces in and around Seattle.

“We have too much small talk about TV shows, the weather and sports, and we miss out on chances to connect,” Phillips says during a recent phone interview. The cards, which ask about everything from heartbreak to social media to disappointment, happiness and everything in between, act as prompts to, as Phillips says, “genuinely connect.”

At 365 Meaningful Conversations, each participant chooses five question cards and places them face down on a table.

“This is not like tarot,” quips Genevieve Neely, a chipper 30-something with an infectious chuckle, as she sifts through a stack of cards during a 365 Meaningful Conversation event in April at Optimism Brewing.

The rules are simple, Phillips explains. Each group member can select whatever card “sparkles your fancy,” she says. Though ideally everyone would like to jump in on every question, you never have to answer one if you don’t feel like it. Other rules include: Don’t leave someone’s comment out to dry; ask follow-ups. And: Don’t take up all the talking space.

At the recent Optimism event, three men and two women — ranging in age from twentysomething to sixtysomething — look intently at rows of cards.

At the table sits a retired nurse with a passion for embroidery protest art. The man, who came to see if “conversation was possible within the texting world," picks the first card. “What brings up anxiety in your life and how do you handle it?” he reads aloud.

“That’s easy,” he answers in a heartbeat. “I hear words and phrases that people use and, as a kid of the ’50s, I don’t understand them.”

“What was the word you heard today?” someone inquires.

Someone offers up that it likely refers to the unofficial cannabis “holiday” on April 20. Then it’s back to the original question about what’s causing you anxiety. Carlos, a polyglot from Argentina who did not want his last name used, explains he recently has realized his job and life expectations have been creating stress. He’s trying to learn to enjoy the moment more, he says.

As the evening continues, the group’s conversation ebbs and flows from more weighty personal subjects to morning rituals, FOMO and body language. Whenever there’s a brief silence, a new question card revives the conversation.

After a card prompts a discussion about things the group has changed their minds about, one person reveals they used to be a fervent anti-vaxer until their father almost died of measles. Everyone nods. No judgment.

During most of this, Andrew Sheng — a programmer whose miniature glass of beer lasts him a whole evening — has barely spoken. So when he suddenly reveals he has always dreamed of becoming a botanist, the group leans in. The members ask follow-up questions and nod.

“I love seeing people open up and share their thoughts, experiences and stories,” Phillips says later. “I want every single person to feel like they’ve been seen and heard and accepted in who they are and what their life is about.”

Optimism is aptly named for someone like Phillips. She is the kind of person who tries to self-edit her email drafts for exclamation points only to leave them in. She is deeply curious about people, she says.

In kindergarten, she would run over to talk to the kid sitting alone in the corner of the playground. When she 15 she once asked the man seated next to her on a flight from Seattle to New Jersey how he was doing — and they ended up talking about his divorce for hours.

In Bowdoin College in Maine, where she studied sociology and education, Phillips started writing down quotes — from John Lennon, Maya Angelou, Mary Oliver — about life, grief and love on stacks of cards. It was a way to work through her feelings in her prejournaling days. Then on a wilderness training and snow camping trip in the Three Sisters Wilderness, alone and huddled under her tarp for three days, she wrote questions on the back of the cards.

Her deck kept growing and Phillips eventually enlisted the company that makes the game Cards Against Humanity to produce a box set of 365 cards.

The card game initially helped her meet people when she moved to a new city: Boulder, Colorado. She was surprised that her “heart-to-heart” events had become weekly events that would draw up to 30 people. Now, Phillips — who is originally from Woodinville and who moved back to the area early this year — is hoping to recreate the success in Seattle.

“You’re not thinking about looking for a partner, or [thinking about] your professional reputation. There’s no underlying goal,” says Genevieve Neely, a skier, runner and daredevil with a thirst for new experiences about why she enjoyed the “low-stakes” Meaningful Conversations concept so much. “It’s like a shortcut to authenticity.”

But this supposed authenticity comes at a price; the events cost $20 to participate. Phillips acknowledges the price might be a barrier though she offers a sliding scale and is hoping to lower the price in the future.

Social media, the pace of life, the splintering of family and friends and other life pressures make it harder for people to really engage in “simple but superimportant interactions with each other,” says Jonathan Kanter of the University of Washington’s Center for the Science of Social Connection. Interactions, “where you talk about how you really feel and what matters to you. That basic equation of just sitting down, sharing what is important in your life, and feeling seen and heard — that’s the solution and that can be done in all sorts of ways.”

Kanter had not heard about 365 Meaningful Conversations, but says it “sounds like a good way to connect.” He added that, in general, there are risks associated with being vulnerable with strangers. “If you are going to dive deep, you may need a lot of support, which isn't always available with people you don't know well,” he says. You’d have to keep people connected after one-time events to create a sustainable “solution” that could combat loneliness, he adds.

In King County, 16% of adults have no adequate social or emotional support, according to data from the Greater Seattle Civic Health Index.

Loneliness doesn’t just impact your mental health. A study from Brigham Young University  found that loneliness and social isolation are associated with a nearly 30 percent increase in mortality, which makes being chronically lonely or socially isolated as bad for you as smoking and worse than obesity.

“You could argue that loneliness is a significant public health problem,” says Kanter. “It affects stress, cortisol levels, your immune system. The list goes on and on.”

Not everyone who attends the 365 events is lonely or looking for connections or friendships. Neely, the skier/daredevil, for example, came out of curiosity and perhaps a sense of responsibility as a homegrown Seattleite, she says.

“I’m from here. I’m super comfortable with my social circle,” she says. “But maybe I need to step outside of that circle and be welcoming to new people. Seattle’s changed a lot since I’ve become an adult.”

“I’m concerned [the Seattle Freeze] becomes a meme with a life of its own, and people stop trying,” Neely says. “I don’t want to just accept that I’m a Seattle native and use that as an excuse not to make an effort.”

At the same time, Neely points out that she didn’t follow up with anyone after the event.

No one did, in fact. After sharing thoughts and insights about therapy, coming to terms with a new identity after retirement, letting go of wanting a family and kids, and the challenge of making friends everyone thanked each other and went their separate ways into the night. No phone numbers were exchanged.

“It makes me think about summer camp, in a way,” Neely says. “You just happen to be in the same space, and if it happens, great. If it doesn’t, that’s OK. You still get to chat and have a beer with people.”