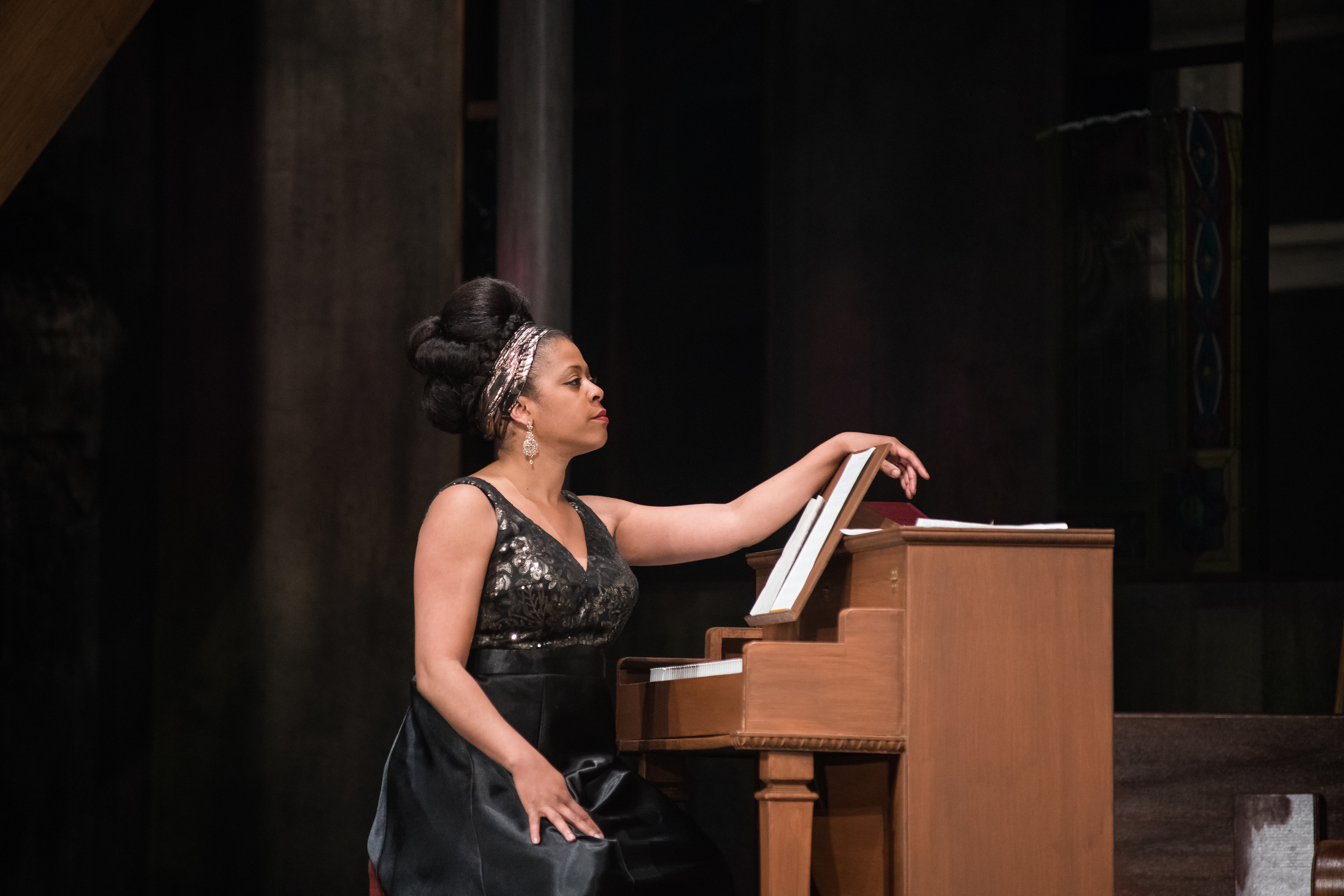 When Nina Simone broke through the music scene in 1959, the lanky African American singer looked like no other star. A classically trained pianist, with a voice that could whisper and trumpet blues and pop, she also sounded like no one else. And the dramatic trajectory of her life (Simone died in 2013, at age 70) was unique, too.

So how to set about portraying her on stage? In Nina Simone: Four Women at Seattle Repertory Theatre, actor Shontina Vernon and director Valerie Curtis-Newton made a wise choice. As Simone, Vernon doesn’t attempt a physical impersonation in the show, which runs through June 2.

“You can’t impersonate her,” Vernon, a cordial, forthright Seattle-based performer and filmmaker, said during a recent interview over coffee. “You can only work with what you have.”

She notes that Simone was darker-skinned and taller than her and their singing voices are markedly different. What Vernon brings to the role, however, is her own affinity for making music, a similar small-town Southern upbringing (Simone was born Eunice Wayman in Tryon, North Carolina; Vernon hails from Lemesa, Texas), and an appreciative understanding of the turbulent era Simone blazed through. “She’s one of my icons up there with Langston Hughes, James Baldwin, Audre Lorde, Lorraine Hansberry,” said Vernon. “They were all activist Black artists who dared.… I’m really most interested in Nina’s spirit.”

As the title suggests, Simone is not the only woman profiled in Christina Ham’s script. The drama was inspired in part by Simone’s 1965 song “Four Women,” which conjures a quartet of archetypal African American females. Set in the ruins of a Black church in Birmingham, Alabama, in 1963, just after the white supremacist bombing of the 16th Street Baptist Church that killed four girls, Nina Simone isn’t so much a play as a rhetorical conversation between women representing different experiences of Black womanhood. They talk about their lives, bicker about their differences and sing out their beliefs and frustrations, eventually finding common ground. The stirring cast and the potent music lift Nina Simone above the dramatic limitations of a fairly didactic broadside.

Aunt Sarah, enacted by the highly compelling Shaunyce Omar, is a domestic worker and a religious Christian. Sephronia (Britney Simpson), a light-skinned woman of mixed race, has found her mission engaging in the civil rights movement.  Sweet Thing (Porscha Shaw) is a tough-talking, switchblade-wielding young prostitute.

And last, there is the fierce, angry Peaches (her song lyrics: I'm awfully bitter these days / ’cause my parents were slaves). She represents Simone and is played by Vernon with a regal bearing, a prickly exterior and an impassioned defiance of racial injustice.

In her real life, as in the play, Simone was radicalized by the Alabama church bombing. As illuminated in the Netflix documentary, What Happened, Miss Simone?, she turned away from mainstream show business to boldly confront racism and embrace Black power in her public statements and in her numerous protest songs. At the time Simone, like such other outspoken Black entertainers as Eartha Kitt, paid a price for her politics in lost bookings and negative press coverage.  (Disgusted with American society, she spent her later years living in Africa and Europe.)

To get into character, Vernon “read the script a lot, but also I listened a lot to Nina’s music. There’s the lyrical content, but also the musical content. She didn’t have the smoothest, most melodious voice. But she wasn’t afraid of using the rocky terrain of her voice, the roughness, to get her point across.”

That was especially true in “Mississippi Goddam,” a scathing cry of dissent, written in 1963. In that year, along with the bombing and the legendary March on Washington protest, NAACP activist Medgar Evers was assassinated in Mississippi by a member of a racist hate group, the White Citizens’ Council. Simone was keenly aware of all these events, and expressed her outrage in the song, one of the high points of the Seattle Rep production.

With a higher range and a silkier tone, Vernon’s supple vocalizing doesn’t exactly evoke Simone’s. But her cogent intensity also gets across the messages of “Mississippi Goddam,” as well as “To Be Young, Gifted and Black” and other Simone songs included in the show. “I find places in the songs to challenge myself, to not just keep it pretty but draw out that raw emotion,” she said.

Vernon also studied Simone’s speaking voice and her physicality. “A lot of Black artists of the time, they weren’t lazy with language," she said. "Nina was very articulate and specific with her enunciation.”

As for the dignity she projected in the way she carried herself, Vernon observed, “Nina borrowed that from the culture of classical music. She was a diva, like [opera singers] Leontyne Price and Jessye Norman.” The full-length evening dress and towering hairdo Vernon wears for the part echo Simone’s wardrobe choices at the time. “I’m short and Nina was very statuesque, so the hair and the high heels I wear lend themselves to height," Vernon said. "But as she turned more toward activism, her look changed, more to cornrows and Afros and dashikis.”

Though the play is a snapshot from another period, Vernon believes it resonates with the renewed struggle for racial equality. “There was a time you might do this play as a piece of history. But it feels today like this is our now," she said. "Our work isn’t done…. There is always more work to do.”

Vernon’s own work, along with sporadic acting jobs, focuses on making independent films on topics that are meaningful to her. One such project is Grrrl Justice, a short film she directed about “the pathways for girls of color and queer youth in the juvenile justice system.” It has had screenings in New York and Seattle.

Vernon is now writing a feature film, about “queer women in blues from the 1930s.” She notes with a smile that after the run of Nine Simone: Four Women ends, that major venture “is going to take my heart, my soul and all my time.”